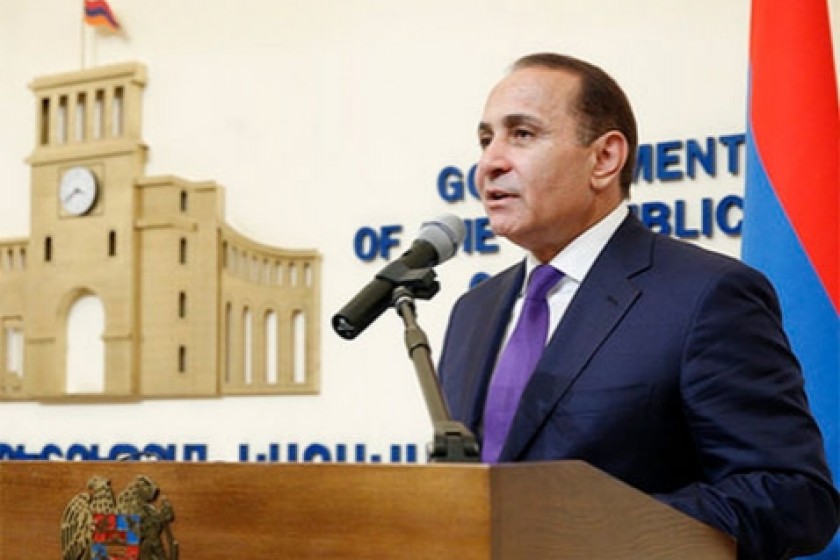 All In the Family: Armenian Prime Minister’s Booming Business Empire

Abrahamyan owns them via proxies – his family members. (He’s married, has three children and seven grandchildren)

This way he’s not in violation of the Armenian Constitution prohibiting government officials from engaging in commercial enterprise while in office.

During a May 15 cabinet session Abrahamyan   declared that the government had adopted measures to create a level economic playing field for all and that all entrepreneurs must work on and equal footing.

The prime minister then put his foot in his mouth by declaring: “And I want to say that I will start with myself, so that all understand the need for equality.” In essence, Abrahamyan stated that he too was a businessman who hadn’t been playing fairly up till then.

While the prime minister doesn’t officially own any businesses, his financial disclosures, which all top officials must submit yearly, tell quite another story.

No one can say what the sources of this “other income” are. The Commission on Ethics of High-Ranking Officials, the oversight body that receives such disclosures, sees fit not to ask.

When you look at Abrahamyan’s official bio, one seeks that the prime minister’s last job in the private sector was way back in 1995 as the director of the Artashat Wine and Brandy Factory. He’s been in public service, in various capacities, ever since.

The question thus arises, how did Abrahamyan and his wife become millionaires?

On May 21 of this year, when the parliament was debating the government’s economic reform package, MP Nikol Pashinyan directly asked Abrahamyan how he became so rich if he wasn’t engaged in business.

The prime minister responded that Pashinyan shouldn’t take such a “negative stance” towards business, adding that: “As to my assets, I’ve never concealed the fact that I own things. I’ve revealed it all according to the letter of the law in detail. I worked in those years in the agricultural sector, back when it was permissible. During my various government posts, I never acquired any holdings and neither did I accrue them through corrupt practices.”

Abrahamyan’s bio states that his first job from 1990 to 199 working as division head of the Burastan Brandy Factory. It also states that he graduated from the Yerevan Institute of National Economy, but no dates are given.

If, as stated, the prime minister was born in 1958, entered the institute at the age of 18 and then spent five years studying there, we arrive at the year 1981. So what did Abrahamyan do in the interveningnine years before getting a job at Burastan?

In his native village of Mkhchyan, a senior resident told me that Abrahamyan worked as a laborer at an auto repair shop before Burastan. The old man even showed me the place which now belongs to Abrahamyan’s family according to workers we talked to there.

The Abrahamyans must have other income sources than agriculture

The only proof that Abrahamyan is engaged in agriculture appears on his financial disclosure in the box marked ‘revenues’. Surprisingly, Abrahamyan shows no land holdingsin any of his disclosures.

But the prime minister controls large tracts of land in Ararat Province. Just in the village of Narek, he maintains a 120 hectare parcel (100 grapevines and 20 hay fields) registered under his wife’s name.

Narek Mayor Garoush Hakobyan told me, “Argam has 120 hectares. If he didn’t buy it, or I or someone else didn’t, 70% of our lands would have remained up in the air.” {Argam is the prime minister’s son}

The Abrahamyan family also owns land in the villages of Kaghtsrashen, Ourtsadzor and Goravan. (None of the mayors wanted to speak to Hetq on the topic).

In 2013, the European Bank for Reconstruction and Development issued Armenia a 25 year US$30 million loan to improve the country’s irrigation infrastructure. The Armenian government chipped in US$7.5 million of its own towards the project. According to the project, the villages of Narek and Kaghtsrashen, along with Abrahamyan family lands, are to be guaranteed water from the River Azat on a gravity fed basis.

The Abrahamyans: Annual Income from Sale of Agricultural Goods (in AMD)

As the numbers in the below chart clearly imply, the Mr. and Mrs. Abrahamyan do not only receive income from the sale of agricultural goods.

No commercial enterprise can be launched in Ararat Province without the participation of the Abrahamyan family. They have shares in many businesses and oversee the province’s economy. Hovik Abrahamyan has brought his brother Henrik and Henrik’s son Hovhannes into many of his businesses. No wonder then that Rafik (another brother of Hovik) and their father Argam have been elected to the Mkhchyan municipal Council. Arsen Abrahamyan, a nephew of the prime minister, now serves as the head of the Ararat Provincial Police. After being appointed the prime minister, Hovik Abrahamyan’s son-in-law Vahan Mamikonyan was appointed the tax agency head in Shengavit (a district of Yerevan), while another son-in-law, Vladimir Tamrazyan was appointed head of the Zvartnots International Airport Customs Department

"ARTFOOD" Artashat Cannery is another business owned by Argam Abrahamyan. Vachagan Karapetyan, son of Armenian Minister of Agriculture Sergo Karapetyan, is a 50% shareholder. The general manager is Armen Mkrtchyan.

Hetq sent an inquiry to SME Investments UCO executive Director Artur Badalyan about this loan. Badalyan refused to comment, arguing that he had no authority to respond under Armenian law.

Trans Gaz Ltd., established this year, is another fueling station company partially owned by Argam Abrahamyan (30%). 25% is owned by Gagik Poghosyan (brother of Republican Party MP Karineh Poghosyan) and a relative of Hovik Abrahamyan on his maternal side.

Dalar Gaz Ltd., also established this year, was owned exclusively by Argam Abrahamyan until September 26 when 100% ownership reverted to Khachatur Hovsepyan, its director.

The company is registered at the same address as Gagik Poghosyan. Doubtlessly, the change of owners was a formality and that Argam Abrahamyan remains the true owner.

The company delivers fuel to stations throughout Yerevan and surrounding cities.

Metzn Argami Ltd. was established in 2007 by Gagik Poghosyan. One year later he handed 100% of the shares to the prime minister’s wife Julieta Abrahamyan.

The company operates a number of gasoline stations and other shopping sites in Artashat and surrounding villages. One of the gas stations is located at the entrance to Mkhchyan village. The company’s main business is the buying and selling of foodstuffs and non-food items.

Arashag Ltd. operates gas stations along the Artashat-Yeraskh roadway. Gagik Poghosyan owns 40% of the shares. The company is also engaged in construction, automotive repair, and foodstuff and non-foodstuff trade.

Hovan-Lian Group Ltd. is also a prominent owner of natural gas stations. Henrik Abrahamyan and former MP Armen Pourdoyan own equal shares in the company, which is named after their children Hovan and Lian.

Ard-Gaz Ltd., created in 2013, is a new natural gas station company servicing the village of Mkhchyan. Henrik Abrahamyan and fellow village resident Gayaneh Hovsepyan own 30% each, with Sousanna Khachatryan, a resident of Abovyan who also serves as company manager, owning the remaining 40%.