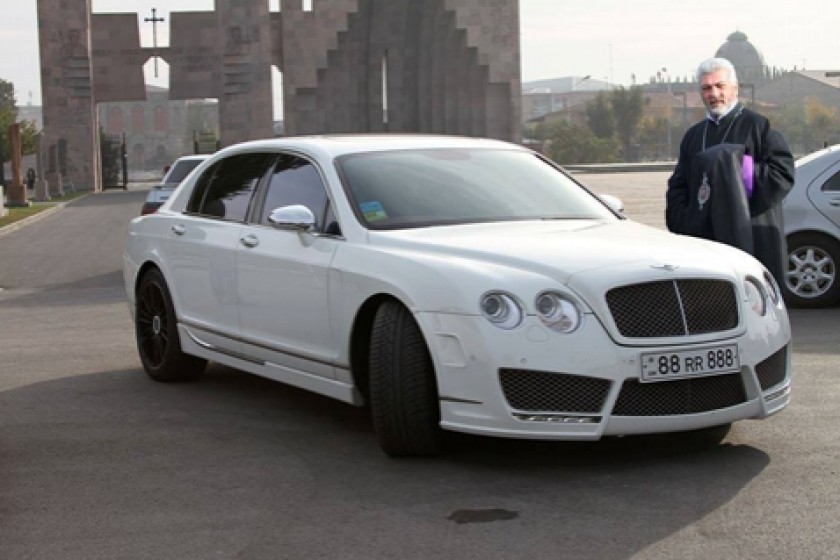 Offshore Labyrinth: Former Armenian PM and Church Primate Have Yet to be Questioned

Here’s a photo taken awhile back of Ararat Diocesan Primate Navasard (Samvel) Kjoyan proudly standing next to his famous Bentley.

Archbishop Kjoyan always claimed that the car was a gift, but never revealed from whom. The primate says he’s now sold the car.

We know that the Bentley was a gift from businessman Ashot Sukiasyan who, in turn, purchased it with loans received from Ameria Bank for which another businessman, Paylak Hayrapetyan put up his assets as collateral.

The case looking into the offshore labyrinth involving the primate and the former prime minister of Armenian exposed by Hetq isn’t getting anywhere.

Ashot Sukiasyan, the third player in the multi-million dollar drama, remains under arrest.

But that’s about it. The state investigative body supposedly looking into the case has yet to question either Primate Kjoyan or former Armenian Prime Minister Tigran Sargsyan, who has since been appointed the country’s ambassador to the U.S.

If Kjoyan hasn’t been interviewed then the Bentley matter isn’t a part of the investigation.

In a letter sent by to ’s Prosecutor General and Hetq explaining how the names of Primate Kjoyan and former PM Sargsyan appeared on the registration documents of the Cypriot offshore company Wlispera Holdings Ltd, Ashot Sukiasyan wrote the following:

“I stood as the godfather of the cross at the blessing of the water ceremony at Saint   located in the Ararat Diocese. The secretary was Tigran Sargsyan and the diocesan primate, Archbishop Kjoyan. I wish to raise the issue of the offshore company Wlispera Holdings Limited. First, let me say that I founded this company and I registered T. Sargsyan and N. Kjoyan as shareholders, without their knowledge and without their agreement. I took this step to protect my business from various threats. It never occurred to me that what I did could have such consequences.”

After Hetq broke the story, then Prime Minister Sargsyan declared that he had no connection to the company. Archbishop Kjoyan denied any connection as well. The two also stated that they had no idea how their names appeared on Wilspera’s registry document as shareholders.

Kjoyan had merely stated that he visited Cyprus once, accompanied by Sukiasyan.

Following the pronouncements of Ashot Sukiasyan’s lawyer to the press we can infer that the investigative body is only looking into Wlispera Holding; just one of the Cypriot off-shore companies involved in the case.

But this approach neglects two other companies intricately tied to the matter.

The first, A.B.S. Global Limited, was the prime facilitator of the shady off-shore transfers.

Readers will remember that $9,370,450 of the loans issued by Ameria Bank were transferred by Ashot Sukiasyan to the accounts of several offshore companies held at the Hellenic Bank Publik Company of Cyprus. The loan monies were transferred to:

A.B.S. Global Limited, the company to which the largest amount was wired, is 66% by Wlispera Holdings Limited.

It turns out that A.B.S Global Ltd has had commercial transactions with companies of other countries.

Thus, an end to the investigation isn’t only awaited in Armenia.