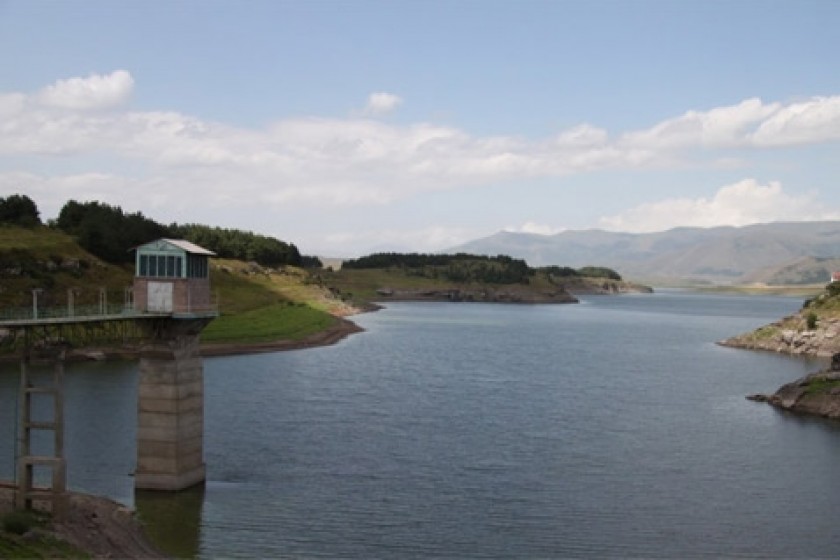 Pools of Wealth (Part 2): Armenia Begins to Dam the Waters Flowing to Azerbaijan

As was previously reported, Armenia has 80 water reservoirs holding a total volume of around 1.4 billion cubic meters.

What reservoirs are seismically vulnerable and pose operational risks?

We asked the Ministry of Territorial Administration and Emergency Situations to identify which reservoirs in Armenia were seismically vulnerable and posed operational hazards. The ministry listed 24 reservoirs that were a priority (overall conditions, the dam structure, socio-economic conditions downstream of the dam).

From this list, the reservoirs posing high, medium and low operational risks, respectively, are the following:

There isn’t a reservoir in Armenia whose operations has been stopped due to high seismic vulnerability.

According to figures provided to us by the National Water Council’s Hydraulic Engineer Hamlet Harutyunyan, there are 85 reservoirs in Armenia whose operations have been turned over to different companies. The map below shows the reservoirs (irrigation and electricity generating) with their overall amounts. The 79 irrigation reservoirs are operated by the companies Sevan-Hrazdanyan-Jrar and Akhuryan-Arax-Jrar and other companies operating using water. The six electricity generating reservoirs fall within the Sevan-Hrazdan and Vorotan grouping of cascades.

Artzvashen, one of Armenia’s reservoirs, is now situated within Azerbaijani territory.

Reservoir construction is considered a priority in Armenia and 18 damns have been given priority status. The table below lists statistics related to these 18 reservoirs, out of which a few have been changed for reasons to be sited below (table provided by Hamlet Harutyunyan). 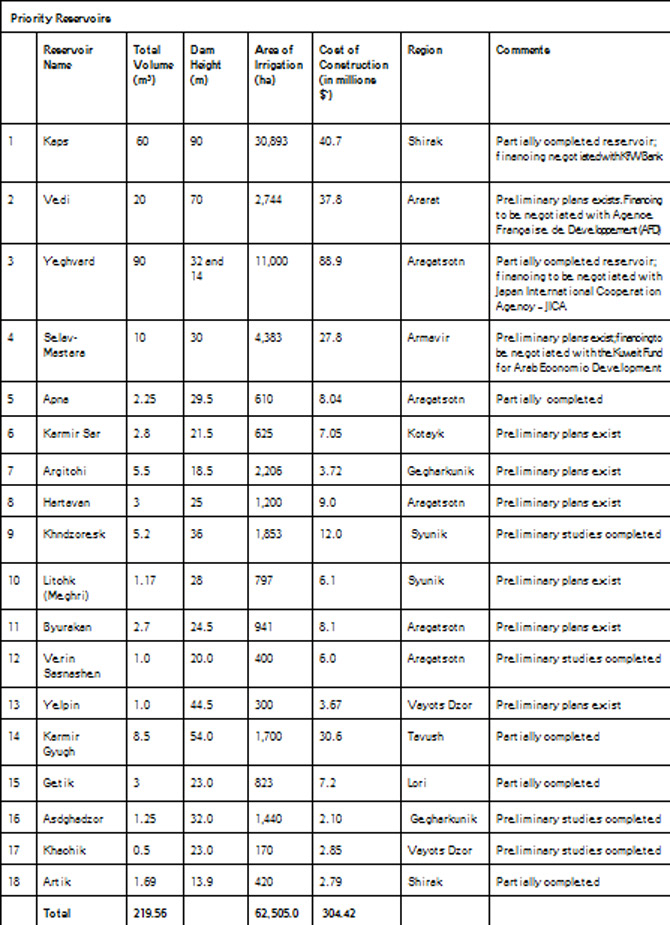 Out of the listed 18 reservoirs construction of four reservoirs is under way: Kaps, Vedi, Yeghvard and Selav-Mastara. The Kaps and Yeghvard reservoirs are partially complete, while for the other two preliminary plans exist, which were drafted during the Soviet era. All the work is in the preparation stage. We’ll look at each one separately.

This partially completed reservoir is located in the Shirak region nearby the village of Kaps on the Akhuran riverbed. Construction began in 1985 but work slowed down after the 1988 earthquake. Work on the reservoir was suspended in 1993. While the work was being performed various components of the reservoir were constructed and cement was poured. Only 20 out 73 meters of the dam’s planned height was completed. The reservoir was supposed to have had a total volume of 90 million cubic meters but that was later reduced to 60 million. 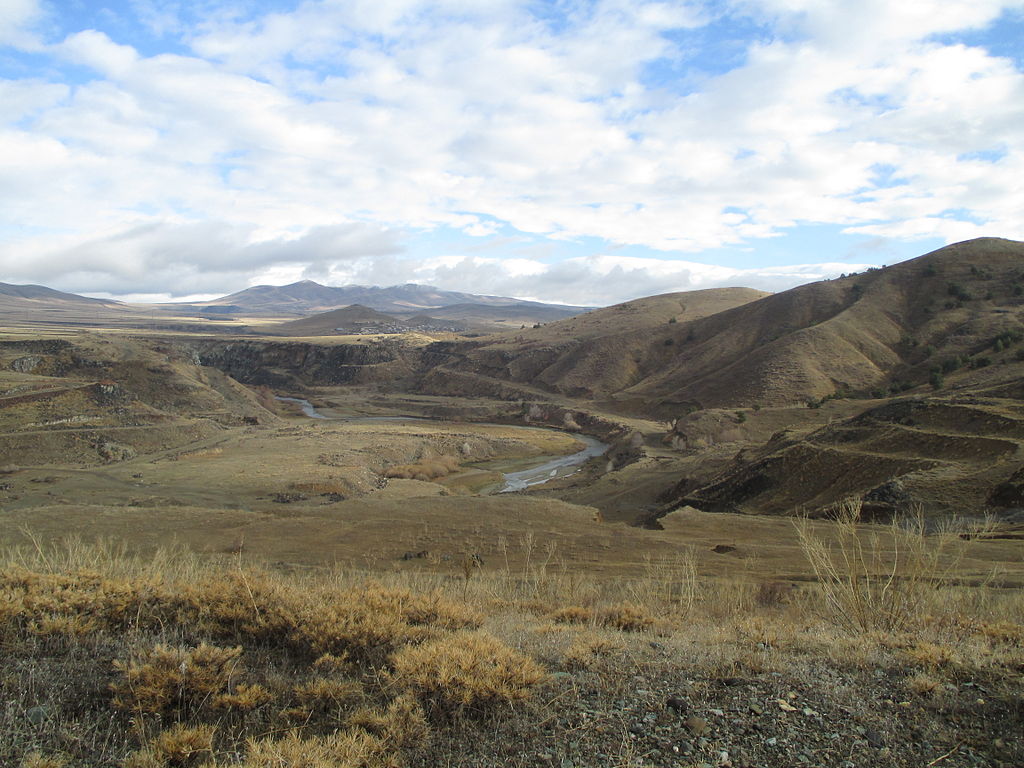 The initiative to restart construction on the Kaps Reservoir only just recently went underway. On August 8, 2013 the Armenian government approved an agreement with the German government-owned development bank KfW to finance the reservoir project’s completion.The bank showed its readiness in completing the dam’s construction and acall for bids on the design went out. The program was to cost 18.5 million euro, the financing of which was approved by both parties. KfW also showed its willingness to grant 350,000 euro for an initial study before the first phase was complete. 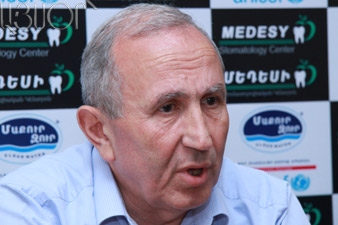 According to Ghazaryan’s preliminary calculations, a 25 million cubic meter reservoir would have the potential for increasing the area for irrigation by 5,000 hectares or increase the volume of irrigation. That, along with the envisioned gravity-fed pipeline, would make it possible to save the electricity   used for eight pumping stations, amounting to 1.3 million kWh per year. In order to maintain a 60 million cubic meter reservoir, a gravity-fed pipeline would reach the Talin vicinity in Aragatsotn to safely irrigate around 20,500 hectares of land.  Out of this, around 3,500 hectares now irrigated mechanically would receive gravity-fed water, guaranteeing water to16, 000 hectares would improve, and irrigated lands would increase by 952 hectares. 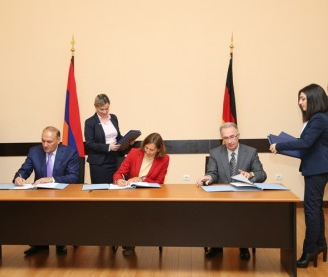 On December 19, 2014 the Armenian Ministry of Finance, the State Committee of Water Economy and KfW signed the “IWRM/ Akhuryan River, Phase 1” contract, with a 50 million euro cost of credit and 2 million euro worth of grant agreements. These funds are to be used to restore Kaps Reservoir and upgrade its infrastructure. According to the official press release, the funds will be used exclusively for agricultural irrigation purposes—rehabilitating the Kaps Reservoir along the Akhuryan River, completing construction, improving water management and other relevant services. The repayment period on the loan will be 15 years according to the credit agreement, of which five will be concessional.

This reservoir was intended to be constructed in the area around the village of Myasnikyan in the Armavir region. It would be filled by waters flowing down the slopes of Mt. Aragats, picking up the runoff water from the Selav-Mastara stream and Akhuryan Reservoir and the free-flowing waters from the Talin canal. According to Harutyunyan, the initial plans for the reservoir were devised in 1978. The intended volume of the reservoir was to be 10.2 million cubic meters with a 30 meter high dam. That would have ensured the safe watering of the 4,383 hectares of land of the six communities in that area.

Representatives from the Kuwait Fund for Arab Economic Development expressed interest in the project and met with the Armenian Minister of Territorial Administration and Emergency Situations Armen Gevorkyan in March of 2013. Subsequently thereafter the fund was given the green light to perform a feasibility study for realizing the project. Negotiations are underway between the fund and the Armenian government. According to preliminary estimates the Selav-Mastara Reservoir project would cost $27.8 million.

The Yeghvard Reservoir was designed in the early 1980s and construction began during that time as well. The reservoir is found in the Aragatsotn region near the border with Kotayk between the Kasagh and Hrazdan rivers. It’s not built on a riverbed so water doesn’t fill into it naturally. The plan originally was to have the 228 million cubic meter reservoir filled by a gravity-fed line from the Hrazdan River and a pump feed from the Sevdjour (Metzamor) River. The reservoir would have the capability of providing enough water to irrigate 30,500 hectares and increase the safe water supply level.

However, filling the reservoir became problematic when the Sevdjour River significantly receded. It was decided that the water would enter from the Hrazdan mudflows via the Arzni-Shamiram waterway. As a result the reservoir’s volume decreased to 90 million cubic meters. Ghazaryan indicated that water from the reservoir can sufficiently irrigate 12,200 hectares and nine pump stations would be operational with a yearly savings of 28.6 million kWh. About 5,500 hectares would be irrigated with water from the Sevdjour River thanks to the project. Furthermore, due to the accumulating Hrazdan mudflows the reservoir would also help protect against the potential for floods in the Ararat Valley. 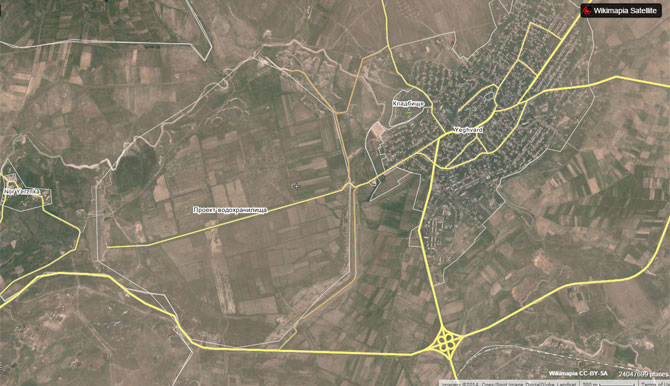 Land was cleared for the Yeghvard Reservoir in the Soviet era with soil brought in to be used for vineyards. Some work was completed, for instance on the spillways, which have heights of 14 and 32 meters.  The latter is still incomplete with another 9 meters to go. The spillways are designed to accommodate 228 million cubic meters of water.

Negotiations for financing have been done with the Japan International Cooperation Agency – JICA. According to the State Committee of Water Economy studies for the reservoir will be completed this year.

Harutyunyan is assured that the Yeghvard Reservoir does not have safety issues since the water would fill immediately into the Kasagh River if anything ever went wrong. The problem is related to the tendency to lose water. That’s why the reservoir floor was coated with a layer of clay during the Soviet era, which was quite expensive to do. He stressed that was why attracting the Japanese was so important, to discover what solutions their experts would suggest. 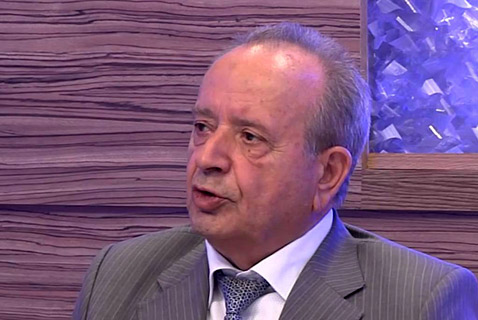 Director of Hayjrnakhagits Institute CJSC Yuri Javadyan, whose company drafted the design of the reservoir, believes that it has to be constructed with a foundation that can hold 228 million cubic meters in order to be able to increase the volume in the future. He believes that the views on both the Armenian and Japanese sides differ on the matter, though. Harutyunyan wondered where the water would come from to fill a reservoir with such a huge foundation. Javadyan’s answer lies with Lake Sevan. In 2030, the lake’s surface is predicted to reach 1,900 meters, so the runoff water will be much greater in quantity than it is now.  The volume of that water would be around 300 million cubic meters, which would flow into the Arax way of the Hrazdan River, so it would then be possible to hold that amount of water in such a reservoir. Nevertheless, Harutyunyan states that the Japanese calculated that a reservoir with a volume of up to 110 million cubic meters could be built instead of the one that exists now.

According to Ghazaryan the reservoir’s completion is estimated to cost $140 million. 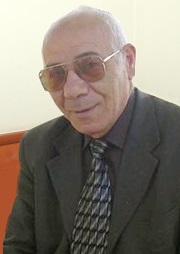 This reservoir will have to be built in the vicinity of Goravan in the Ararat region. According to Ghazaryan, the plans for the reservoir were drafted in 1991 with the aim of irrigating 4,000 hectares of land in the Ararat valley. Water for 2,800 hectares would be pumped out, which would spend 12 million kWh a year. Hamlet Harutyunyan revealed that the Armenian nuclear power plant was intended to be constructed on that site but after geological surveys were taken the decision was made to build it in Metsamor. The reservoir will hold a volume of 20 million cubic meters with a 70 meter-high dam.

On November 25, 2013 the Armenian government signed an agreement with Agence Française de Développement (AFD) to finance the reservoir’s construction and conduct an irrigation system feasibility study as well as draft a preliminary design of the reservoir. The agreement was for an 18-month period, set to expire in May 2015. The Armenian State Committee of Water Economy announced that the preliminary design estimates will be presented in 2015 and construction will get underway.

Harutyunyan along with the French experts concur that the optimal volume for the Vedi Reservoir would be 29 million cubic meters. The reservoir is estimated to cost between $35-45 million.

It’s safe to say that, when looking at the big picture, all four dams will solve a lot of important problems. Kaps and Selav-Mastara reservoirs will assist the Akhuryan and the 35 million cubic meters of water from Aragats’s rivers will be more efficiently used in irrigating lands in Shirak and Armavir, and even Aragatsotn in the future.  Vedi and especially Yeghvard will lighten Sevan’s load by reducing the lake’s water supply of 110-140 million cubic meters. The reservoirs will also contribute to an increase in land irrigation and water levels. 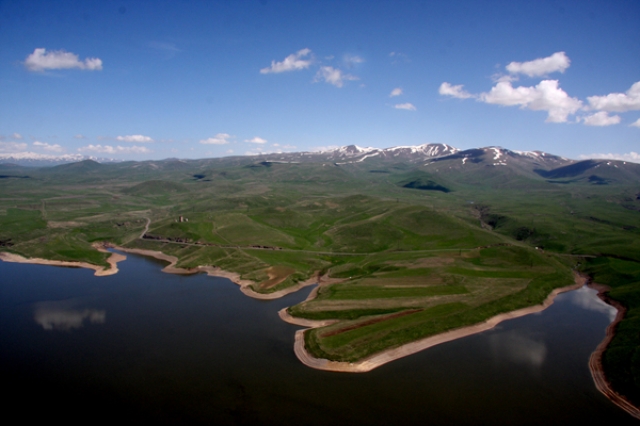 When taking into consideration Turkey’s tendency to build large reservoirs along the Arax River and the lower elevation of Azerbaijan, towards where Armenia’s rivers are flowing, reservoir construction is not only solving Armenia’s internal problems. Armenia’s fresh waters, against the backdrop of decreasing water resources, can become a strategic playing card in regional relations, with Armenia caught in between unfriendly neighbors.