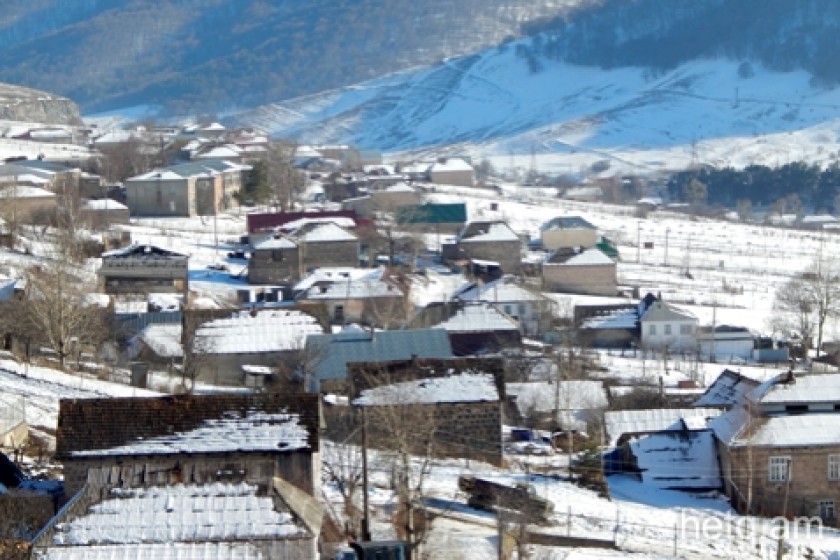 Who Will Win: The Molokans or the ‘Gold Chasers?’

The goldmine in the Lori village of Fioletovo is located on the right bank of the Aghstev River. The homes of Molokan Aleksey Marozov and his neighbors are located nearby.

“I have seven children and I manage to get by somehow,” Marozov said. “I built a house for my family. When the goldmine opens we’ll be deprived of our home and our 2 hectares of land.”

Most of the 1532 residents of Fioletovo are Molokan, and only two Armenian families live there. The Molokans have strong ties to their land and no one having seen hard times has ever left the village.  The residents are absolutely opposed to the goldmine’s opening.

Fioletovo is comprised of 297 ha of farmland, 606 ha of meadows and 730 ha of pastures. About 11.65 ha of land will be lost to operating the goldmine, per the Ministry of Nature Protection’s draft plan. The area, which will be an open pit mine, will cover 5.2 ha. The land is being leased for six years.

Community leader Aleksey Novikov marked three dangerous aspects of the mine. First, the mine is being excavated below the river’s surface level, meaning that the waters will decrease. “We’ll be guaranteed to lose drinking water,” Novikov said.

Second, the only pastureland for the community’s 1200 cattle and 680 horned farm animals is located 15-20 km away from the village. “The road to pasture will cease to exist,” he said.

Third, the mine is located very close to the homes of the village residents. Constant noise and dust will be created, which will not only be damaging to the nearby area but the entire environs.

Novikov believes that when the mine opens the owner may repair the main road in the village and might do some good for the children, but those are just temporary fixes. “And the future of our village will suffer as a result,” he said.

Vasily Zadorkin believes that oxygen in the village will be depleted when the mine opens. “We’re opposed to the mine because our cattle won’t have anywhere to graze and their drinking water will be decreased,” he said.

The mine is slated to operate 300 days a year, 8 hours a day. A total of 29 jobs will be created, with 20 miners and 9 people employed in higher positions.

“We won’t agree to work there because they’ll end up killing us,” Zadorkin said.

Fioletovo residents often find work in Artsakh, Yerevan or Alaverdi. “We work day and night, and people live by their own sweat,” Zadorkin said. “If we can’t reach our goal [of preventing the mine from opening], we’ll be forced to leave our village and Armenia as well.”

Grocery store employee Agrafena Dyakonova had a different perspective on the situation. “Fioletovo residents will lose their way of life and their homes so that a few people can get rich, and at the expense of our children. Do they have any right to open a mine in the village’s vicinity?”

On January 23, at a public debate held on operating the mine, four committees were opposed to the plan, concluding that the mine posed no benefit.

Who Are the Shareholders of the Fioletovo Goldmine?

Grand Redmond Ltd., which was founded in 2005, received an exploratory license for the Fioletovo vicinity. That same company is also preparing to start operating the mine. The company was founded by Hasmik Harutyunyan, Mayren Batoyan and Vardan Margaryan.

Grand Redmond received its exploratory and environmental permits at the time when Vardan Ayvazyan was the Minister of Nature Protection. (He’s now a National Assembly member and president of the Standing Committee on Economic Issues).

Hasmik Harutyunyan’s husband, Yervand Hovhannisyan, was department head at the State Environmental Inspectorate’s Division of Underground Resources and Surveyor Management when Ayvazyan was minister. Mayren Batoyan is a friend of Ayvazyan’s wife. Hetq Online uncovered this information in 2007.

Vardan Margaryan is the owner and director of Meghradzor Gold, a company which operates a mine in Meghradzor.

We tried to chat with Mane Margaryan via Facebook, but as soon as she realized that we wanted to know more about the Fioletovo mine, she stopped responding to our questions.

When we visited the address of Grand Redmond (registered at 7 Arin Berd Street) no office was located there. No one on the premises could give us any information about the company.

We were finally able to speak with the company director, Grigor Gyurjyan and Vartan Margaryan. Margaryan said he was once the director of the mines at Sotk and Meghradzor and owns the mine at Meghradzor, which opened recently. Gyurjyan worked as the First Deputy Minister of Geology during Soviet times.

“We earned our positions. We aren’t the sons of officials to own this or that,” Margaryan said. He insisted that both of them hold no close ties to Ayvazyan and that there were no other shareholders in the company.

What’s in Store for the Fioletovo Mine?

Henrik Grigoryan, deputy director of the Ministry of Nature Protection’s Center of Environmental Protection Expertise told us that an environmental impact assessment of the Fioletovo mine has yet to be made. According to Gyurjyan, after the suggestions and expectations of the village residents have been incorporated into the plans they will be evaluated again.

Gyurjyan believes that the village won’t oppose the mine’s opening since many of the able-bodied working residents have machine operating experience and have worked in other mines.  He also said that the youth are all for the mine, but rumors about potential birth defects have worried them.

Gyurjyan said that during the public hearings the community suggested holding closed elections, but they didn’t.

“They broke the table and started tearing up paperwork. The youngsters in the village want the mine to open but they’re parents are opposed. The kids don’t want to live like Molokans,” he said.

“I believe that anyone opposed to mining nowadays is a traitor to the Armenian people,” Margaryan said. He also thinks that environmental activists are stirring trouble. “I strongly believe they live well with their received grants, while simultaneously turning people into enemies,” he said.

The heads believe that only $1 million is necessary to invest in the Fioletovo mining project since mining equipment will be in use. An estimated three grams of gold is contained in one ton of earth, which amounts to 30 kilograms per year.

In the area there are around 26 families of rare beetles belonging to 133 species that may need protection. Margaryan brushed aside concerns that the beetles would be endangered.

According to the draft proposal, the economic damage caused by the mine’s operation is estimated to be more than 67 million dram.  Damage as a result of air pollution will cost at least 1.64 million dram.