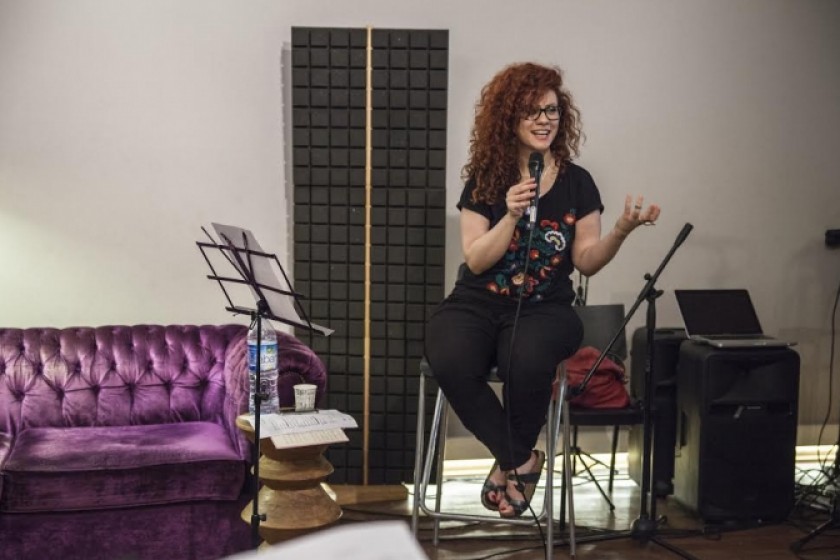 Syrian-Armenian Singer Lena Shamamian: “The identity of my voice is Anatolian”

"I want to return to those lands and sing in Armenian..."

Lena Shamamian, a Syrian-Armenian singer renowned throughout the Arab world is a little known commodity to music lovers in Armenia. She describes herself as probably the best known Armenian female singer in the Middle East.

Recently, Shamamian gave a sold-out concert at the 3,700 capacity Harbiye Hall in Istanbul’s Congress Center. The audience was mostly comprised of Syrians who had fled the war back home and longed to hear echoes of a more peaceful time.

While she greeted the audience in Arabic and Turkish, Lena conducted the concert in English. There were a few Armenian songs in her repertoire as well, and at the end of the concert Shamamian said "thank you" in Armenian.

I caught up with Lena Shamamian at a rehearsal session before the concert.

Your biography notes that you graduated with a degree in economics management from Damascus University. What’s the connection between music and economics?

In Syria, the marks you get at high school determine your future. I had high marks. My parents didn’t agree that I should go to study art. I was forced to select something else.

I studied economics and specialized in arts management. I then continued in business management. But when I started to work with musical groups, I understood that music was my passion. I couldn’t be behind the stage but had to be on the stage. I left it all behind to study music. My love of singing began in childhood and I cannot picture my life without song.

You don’t speak Armenian that well, but most Armenians in Syria do. Why the difference?

Armenian is my first language. Later, I studied Arabic and French. English came with time. My mother isn’t Armenian. My father is. When he left for Canada there was no opportunity to speak Armenian at home. That’s the reason my Armenian isn’t great. But let me be frank. I went to an Armenian school but the fact that my mom was an Arab was a problem. That’s why they failed to teach me Armenian correctly. They didn’t have a right to do so and was a sign of their closed minds.

Now, many say that my western Armenian has improved since I sing western Armenian songs. I can understand the words. I still have difficulty speaking. To improve my Armenian I have to live in an Armenian setting. I feel very close to the Armenian culture but there aren’t many Armenians in my environment. This is especially true now since I live in Paris. I have started to work with André Manoukian, but he too doesn’t speak Armenian that well. (Manoukian is French-Armenian songwriter, arranger, jazz musician, and actor-AM)

Who writes the lyrics and music for your songs?

What are your songs about?

The themes of my songs can be diverse. I don’t sing much about love. It all depends on the situation. I have no preferences and sing about those things which I experience.

But I like to sing about freedom; especially women’s freedom and making their voice powerful. I sing about how women should be their own masters and not allow others to control them. This is what I enjoy to sing about.

You note that Armenian songs have influenced your art greatly. Can you expand on this?

My music has always been influenced by Armenian melodies and harmonies. Even if I sing in Arabic, the roots are more Anatolian than Arabic. Even the way I sing Armenian songs is more in the Anatolian Armenian manner. I can say that the identity of my voice is Anatolian.

I really learnt much from Armenian songs. I learnt how to sing about hope, about going on living. Hope is a recurring theme in Armenian songs; that we always goes forward. This inspires me to do the same for y Arabic songs.

There are many Armenian songs about pain and longing’ about how people lose their land or loved ones. But there is also hope in the end. And that’s what I did for Arabic songs, for those Arabic composers dedicated to the Syrian people. So that they understand how to move forward given the present conditions of war in Syria.

You aren’t well-known in Armenia. What’s the reason?

I’d say that’s Armenia’s problem. I have a unique quality and tempo which I believe people enjoy. The music moves them. I think Armenia is a closed society. If you are Armenian but do not live there, they won’t establish close relations with you. I do not have many video clips to broadcast via television. My audience is reached in the new media – Facebook, YouTube, etc. I don’t know the reason, but I’d say it’s a shame that I, an Armenian singer, is better known in the Arab world than Armenia.

In 2011, I received an offer from the Syrian Ministry of Culture to perform in Armenia. But it didn’t work out for reasons we all know. To date, I have received no such offers from Armenia.

I received an invitation to perform at the “Tzovi Tzovi” competition held in Moscow as an Armenian singer from the diaspora, not Armenia. I have never been to Armenia.

What’s your position regarding the Genocide and Armenian-Turkish relations?

I despise politics. It’s a like a poison that kills people. I don’t understand much about the Armeia-Turkey protocols and relations in general.

All I know is the following. My father hails from Marash and my mother from Mardin. Thus my roots are in Anatolia. I want to return to those lands and sing in Armenian. It’s important for me to say that I come from there. My identity is Armenian and I must sing in Armenian in Turkey.

I’ve never had any issues with Turks because my dealings are with progressive individuals. But at the beginning I was somewhat afraid because all I know about Turks was what I had heard; that they were our enemy.

I deal with people and not with politicians. I have no problems with Turks, the Turkish culture, music, language or religion. My problem is with the politicians.

In reality, I would like to invite all diaspora Armenians to Turkey. We belong to those lands. Those lands belong to us. This is important for me.

I feel this doubly so due to the war in Syria. France is a second diaspora for me.

But if I continuously focus on death I will not be able to go on living and doing that which I want. That’s my main message – to live. Let us live and go forward. I no longer wish to be afraid; to be afraid of death. If I’m to die, let me die. But before I do I want to live. I no longer want to focus on hate, even though I know very well what happened. I went through tough times because of it. Now, I want to sing about my story; that I want to live and that I want others to live.

There are numerous prominent Armenian musicians in the diaspora; for example Armen Chakmakian and Arto Tunçboyacıyan in the States. Wouldn’t you like to work with them?

I have many Armenian songs. Naturally, the best known is “Sareri Hovin Mernem”. But I have others and, through my music, I force people to sing Armenian, starting from Algeria to Egypt to Turkey.

What are your future plans?

My most important aim is to move forward. I am working on an Armenian album, as well as an English and French one. I perform around the world and will be working with different musicians. I’m also writing a new composition.

What would you like to tell the people of Armenia?

I would like to say that I miss them very much even though we have never met. I long to sing with them.

I want to come to Armenia and say that my name is Lena Shamamian.