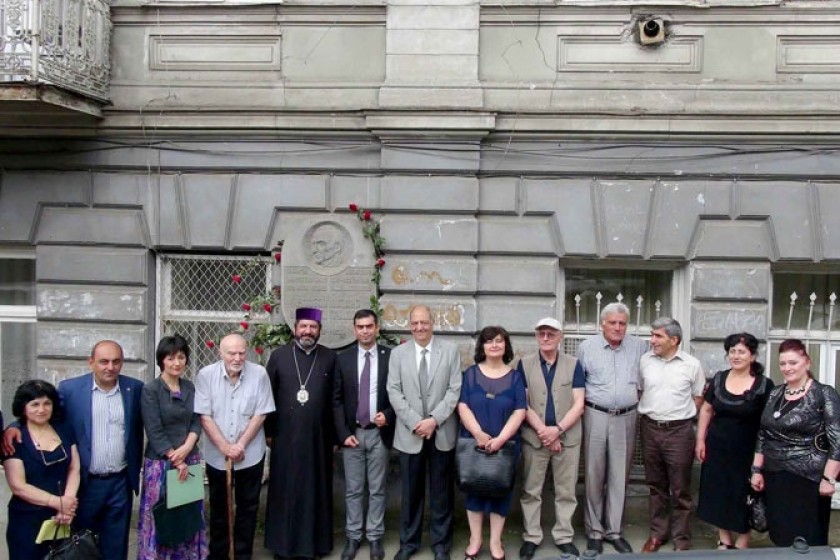 Entire Toumanyan House In Tbilisi Handed Over to Armenian Diocese

The Tbilisi house where Armenian poet and writer Hovhannes Toumanyan lived from 1909 to 1923 has been handed over to the Armenian Apostolic Church Diocese of Georgia.

Four of the six rooms at Amaghleba Street (formerly Davitashvili) had been turned into a library and were purchased in 2012 by former Gyumri mayor Vardan Ghoukasyan from a Georgian citizen. The other two rooms had been in the possession of Toumanyan’s heirs.

On June 8 Edvard Militonyan, President of Armenia’s Union of Writers, led a delegation to Tbilisi for the handing over ceremony.

The delegation was joined by Bishop Vazgen Mirzakhanyan, Primate of the Diocese of Georgia; Karen Melikyan, Advisor to the RA Embassy in Georgia; and Maghvala Gonashvili, President of Georgia’s Union of Writers.

Militonyan ceremoniously handed the keys of the entire six rooms to Bishop Mirzakhanyan.

The new cultural and art center will house book readings and discussions, and other cultural events related to Armenian and Georgian affairs.

One of the rooms will bear the name of Levon Ananyan, the late former president of Armenia’s Union of Writers, who worked so tirelessly to obtain the library section of the house.