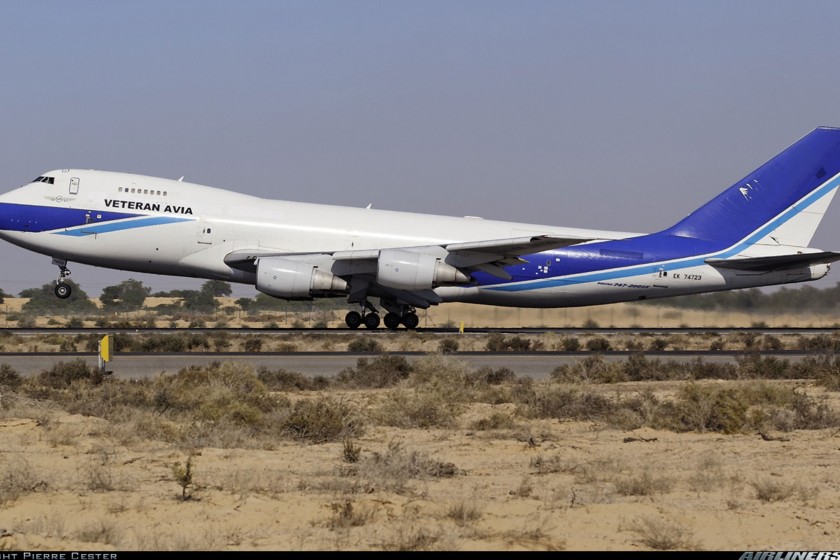 Overseas, and especially in the African continent, Armenian aviators are up to their ears in scandal.

The latest came to light on March 10 when the Wall Street Journal wrote about a United Nations report showing that various companies and countries have been violating an international arms embargo placed on Libya.

While this is not the first time that aviation companies registered in Armenia have been caught up in tangled international stories of intrigue, the government of Armenia seems to turn a blind eye to it all. Such an approach can lead to unforeseen consequences given the strong possibility that one day Armenia may face U.N. sanctions due to the exploits of Armenian aviators.

In February 2011, when mass protests against the Kaddafi regime in Libya began, the despot instructed the army to quash the popular uprising. On February 26, the U.N. Security Council adopted Resolution 1970, demanding an immediate end to the violence and implementing an arms embargo on Libya.

U.N. member states were prohibited from selling arms to Libya or purchasing the same from Libya. The resolution also called for the creation of ‘sanctions committee’ to monitor implementation of the measures imposed (arms embargo, travel ban, asset freeze). A ‘Panel of Experts’ would also assist the sanctions committee in a fact-finding role, following events on the ground in Libya and reporting on an annual basis. The document referred to by the Wall Street Journal (WSJ) is report filed by the panel covering 2015 and has yet been publicized.

The report notes that the arms embargo on Libya has been violated in 2014 and 2015; in particular, by the UAE, Egypt and Turkey. According to the WSJ, the Security Council will study the report and decide what penalties will be applied to U.N. member states having found to violate the arms embargo. 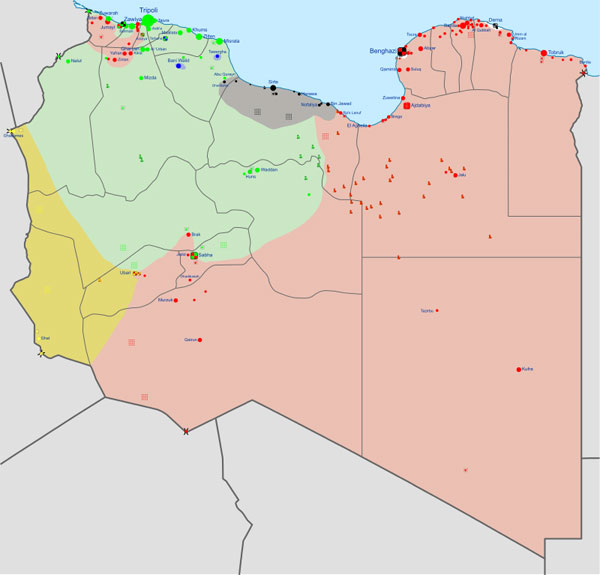 The report notes that arms were sent to the two of the warring government factions in Libya. In 2014, a new civil war broke out in the country. In the accompanying map, the reddish area is controlled by the internationally recognized Council of Deputies (also known as the Tobruk/Libyan government) which enjoys the support of the Libyan Army. The green area is controlled by the Islamist government of the General National Congress (backed by the wider Islamist coalition known as "Libya Dawn") based in the capital Tripoli. In December 2015, these two factions issued a decree regarding a joint government. Another player in the conflict is the Islamic State of Iraq and the Levant; see grayish area on map. The yellowish area is controlled by the Tuareg militias of Ghat. Currently, Libya is led by two separate governments, with Tripoli and Misrata controlled by forces loyal to Libya Dawn and the new General National Congress in Tripoli, while the international community recognizes Abdullah al-Thani's government and its parliament in Tobruk.

The authorities in Tobruk told U.N. experts that they have received vital defensive armaments from overseas allies. Authorities based in Tripoli stated that they had received armed personnel carriers but denied obtaining arms. While the UAE, Egypt, Jordan and other countries were supporting the authorities in Tobruk, the countries backing the Islamists include Turkey, Sudan and Qatar. While the U.N experts have amassed evidence (photos, documents, etc.) that all these countries have supplied military assistance to this or that Libyan faction, none of them have confirmed their participation in the Libyan armed conflict.

According to the WSJ, the as yet unpublished report by the Panel of Experts notes: “Arms and armament continues to be sent to various Libyan factions, in which U.N. member-states and a large network of intermediary companies are involved.”

The WSJ writes that the report mentions the Armenian aviation company Veteran Avia, which transported arms and armaments from the UAE to the Tobruk government via Jordanian airspace. Based in Sharjah, Veteran Avia was unavailble for comment, however the Armenian government informed the U.N. experts that Veteran did indeed fly from the UAE to Libya via Jordan, but that it transported ‘humanitarian cargo’ and not weapons.

This claim by the Armenian government was repeated by Veteran Avia Director Artashes Gevorgyan in a March 14 interview with tert.am. “There were no arms; just humanitarian aid. They asked us about this issue several months ago and we responded,” Gevorgyan is quoted as telling Tert.am. However, Gevorgyan doesn’t specify who inquired. Nevertheless, based on the WSJ article it is clear that the Armenian government inquired and that the experts had gotten in touch with the government prior to this. 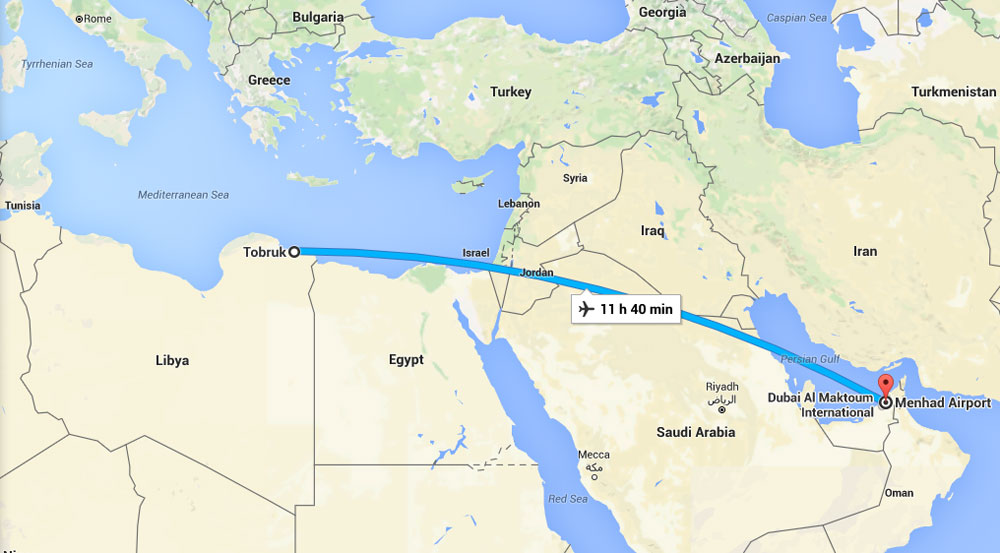 Google Maps measured the time not based on a direct flight, but with stops

In the U.N. Panel of Experts 2014 annual report, dated February 23, 2015, and submitted to the Security Council, we read the following regarding the Armenian company:

We will refer to another episode involving Veteran Avia later. Now, let’s talk about other Armenian aviation companies that have been embroiled in similar stories.

This story is quite similar to the one involving the Armenian company V-Berd Avia. Owned by Vahram Simonyan, from the village of Vahramaberd in Armenia’s Shirak Province, is also based in Sharjah, UAE. According to U.N. experts, the company was involved in the Sudanese civil war. Starting in 2005, the U.N. Security Council issued an arms embargo and a ban on rebel military flights on the Sudanese region of Darfur. Three of the experts on the sanctions committee regarding the Sudan, who had left the panel, wrote in their 2012 letter that an Il-76 aircraft (EK-76592) operated by the Armenian carrier flew 17 flights from the capital Khartoum to Darfur between April and June 2011. During the flights, the Armenian airplane employed the Gadir 101 call-sign. Gadir is the call-sign of Sudan’s military air force. The plane, according to a contract made available to the experts by Simonyan, was leased to the Sudanese ministry of defense. 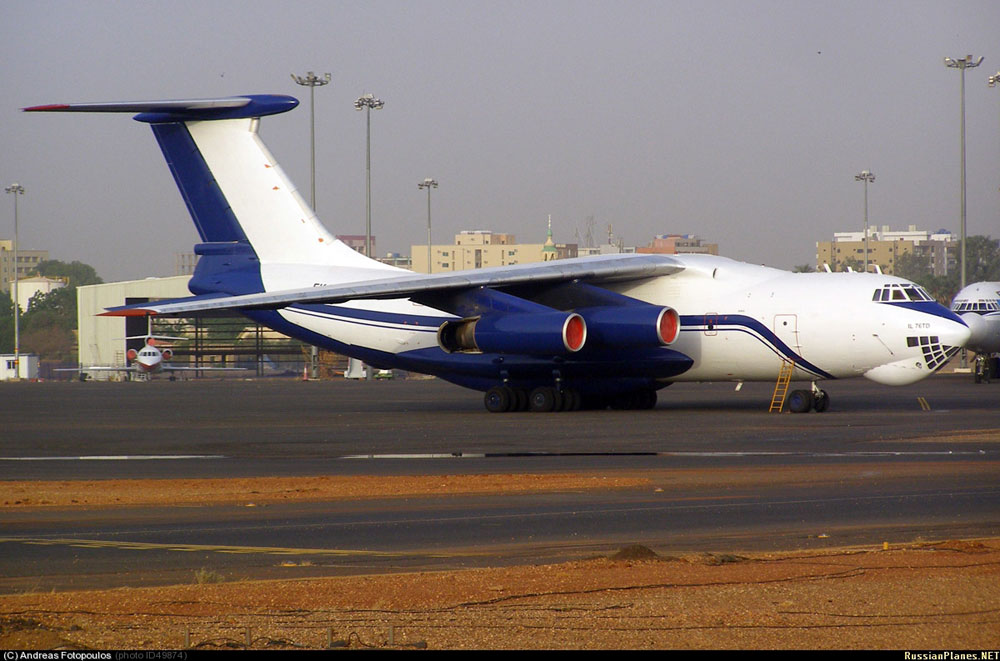 Due to restrictions placed by the Sudanese government, the experts weren’t able to immediately confirm what the cargo of the Armenian plane was. In several cargo manifests provided by Vahram Simonyan the items were listed as foodstuffs or ‘general cargo’, but this wasn’t the case with all the manifests. The experts revealed that the plane had also transported people. It wasn’t clear if the passengers were military personnel or civilians. The experts stressed that Simonyan’s ignorance on the matter was no basis to claim that the Security Council’s resolutions or even the plane’s lease agreement (stating that the plane would not be used in conflict zones and would not transport arms, explosives or other hazardous items) hadn’t been violated. 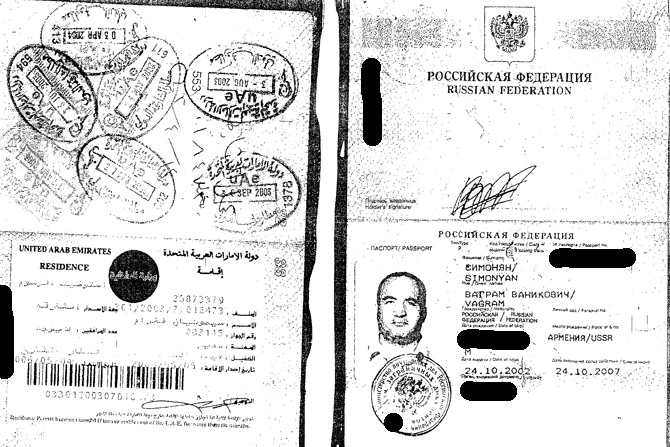 A Hetq source states that Russian citizen Simonyan, during the 2011 Libyan civil war, despite the U.N. arms embargo, transported weapons to Benghazi (under the control of Kaddafi opponents) from Albania with NATO permission. It’s alleged that Simonyan also transported arms to Puntland, an area in Somalia which declared its autonomy from the central government in 1998. This too contravened a U.N. arms embargo. 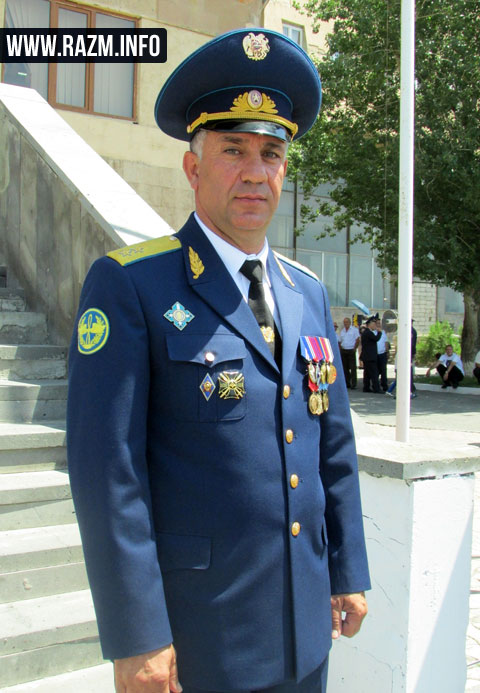 We should also mention that in 2010-2011, Sudan’s air force leased another Armenian Il-76 airplane (EK-76300). In this case, the plane was owned by Lieutenant-General Stepan Galstyan, Deputy Chief of Staff of Armenia’s Armed Forces. We can only guess what role Galstyan’s airplane played in conflict-ridden Sudan. (This plane crashed in the Congo on November 30, 2012, resulting in more than thirty deaths) Both the EK-76592 and the EK-76300 planes operated with documents provided by Armenia’s Department of Civil Aviation. The pilots and technical staff were Armenian.

In 2013, Vertir Airlines, an Armenian company owned by the uncle of the man who heads Armenia’s Civil Aviation Department, was accused by the U.S. Commerce Department for acting as a middleman for an Iranian airline in order to circumvent U.S. sanctions on Iran.

Founded in 2010, Veteran Avia was originally 52% owned by the Sona Gevorgyan, daughter of Artashes Gevorgyan (the current company director), and Russian citizens Muhammad Amir and Malik Bilal. They each owned 24%.  In 2014, Bilal transferred his 24% to Sona Gevorgyan.

Veteran Avia has temporarily suspended operations and Artashes Gevorgyan told tert.am that the company hasn’t flown for more than a year. 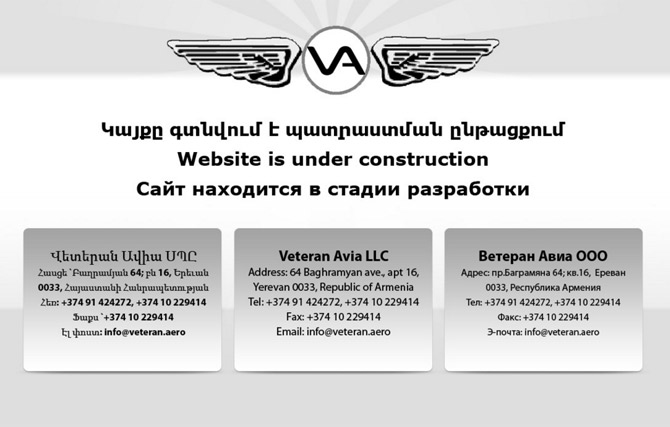 Armenia’s Veteran Avia is part of a wider network with the same name. Companies with the name exist in Greece, India, Pakistan and Great Britain. The same man stands behind all of them - Jaideep Mirchandani, a resident of the UAE. (the man on right in accompanying photo) 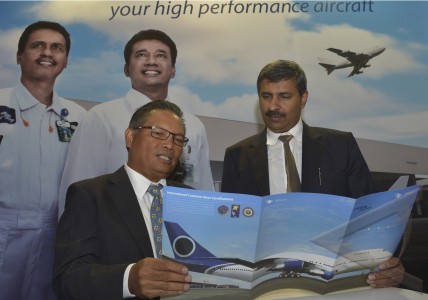 In September 2014, the Industry and Security Bureau (ISB) of the United States ‘blacklisted’ a number of aviation and other companies, including Veteran Avia, for “acting contrary to the national security or foreign policy interests of the United States.

The ISB also charged the Mirchandanis and their corporate officers/employees as having“engaged in transactions with individuals involved in weapons trafficking as well as individuals and companies named on the U.S. Treasury's Specially Designated Nationals (SDNs) list, including Mahan Air of Iran and its affiliates. Persons designated as SDNs were so designated for supporting the terrorist activities of the Islamic Revolutionary Guard Corps-Qods Force.”

In 2016, the names of Mirchandani, two family members, and several companies they own, were removed from the blacklist. Veteran Avia wasn’t removed.

P.S. Hetq sent an inquiry to the Armenian government, asking if it had done anything to avoid such embarrassments in the future. Have Armenian aviation officials looked into the above-mentioned scandals and is the government at all concerned about the activities of airline companies it has licensed? We are still waiting for an official response.