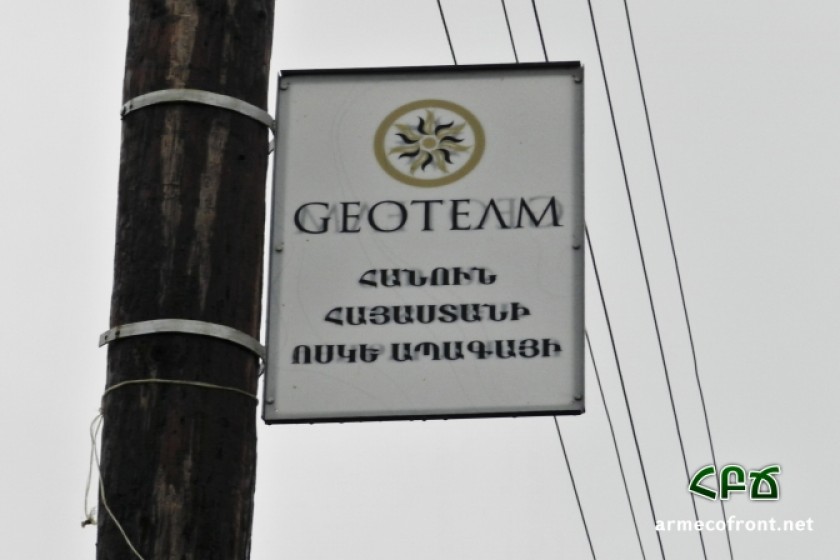 For years it didn’t include Jermuk town as an area affected by the project. However, in May 2016 it presented its 4th document on Environmental and Social Impact Assessment(ESIA) to Ministry of Nature Protection, where it included Jermuk as a project affected community.

This version of ESIA clarifies that the company plans to turn Jermuk health resort into a temporary residence for the mine workers. According to the company’s short term calculations temporary change of the health resort into the miners’ residency will fully compensate losses that the town will bear during the life of the mine. Moreover, according to the company, while the peak of tourists and visitors at Jermuk health resortis only several months a year, mine workers will reside during the whole year, which will be more profitable for the town.

The company foresees that during mine construction works around 370 workers will reside in hotels of Jermuk, while during the exploitation of the mine 250 workers will live in hotels and houses of Jermuk. According to the company, this will directly benefit the owners of the hotels and landlords, while mine workers’ demand for services and goods will indirectly benefit other residents of the town, which in its turn can create and develop new businesses.

As to long term economic development of Jermuk, there is no doubt about the poor prospects of a health resort with a mining site located next to it. 10-11 years later, when Amulsar mine exploitation is over, miners will abandon Jermuk, leaving the locals with polluted environment and a distorted reputation of the health resort. A detailed impact analysis of the mine on the environment can be read here.

However, these are half of the risks. As the company assesses the risks, other problems can occur for Jermuk as well, such as prostitution, drug consumption, sexually transmitted diseases etc.Allthese issues are presented in detail in “Environmental and Social Impact Assessment” (ESIAchapter 6.12, chapter 6.18) published by Lydian International in May 2016.

Here are some excerpts from the ESIA description of the above-mentioned risks: “Development of the Amulsar project has implications for various aspects of the demographic profile of the local population. Key issues include increases in population through bringing new workers to the area and potentially encouraging an influx of opportunistic migrants and changes to existing social structures. […] The construction phase will require a peak workforce of approximately 1300 workers. Due to the skills needed for construction, it is anticipated that approximately 70% of the construction workers will be sourced from other parts of Armenia and potentially other countries. A worker accommodation camp, with capacity for between 500 to 920 workers, will be built by the Company to accommodate the majority of non-local construction workers together with the use of hotel and apartments within Jermuk. […] The operations phase will require a workforce of approximately 657 people.During the operational period, hotel accommodation in Jermuk will be used by Lydian to accommodate approximately 250 workers. These workers are assumed to be professionals who are not from the local area, who will work on a rotational basis, returning to their families and point of origin on a regular basis. 30% of the workforce are recruited locally.

[…]Combining these figures would suggest there is potential for over 1000 people to migrate into the communities during the operations period, of which a significant proportion might be single males. The effects of this potential influx will not be felt evenly within the villages, with Jermuk likely to experience the greatest impact from influx due to the location of the project activities and accommodation locations and the attractions and opportunities that a city of this size can offer. […]Unmanaged influx into the Project area can have the potential negative impact of decreasing the standard of living due to increased pressure on local resources and existing infrastructure. Such pressure can impact community resources like schools and health facilities or exceed the capacity of community infrastructure. Potential impacts are discussed below: Education, Sewerage, Water, Waste. […] Similar Projects in other parts of Armenia and the world provide a solid indication of some issues that commonly emerge when large numbers of workers, mostly men living without their families, are placed in a community with which they are not familiar. […]Similar projects have experienced increased alcohol consumption, new or widening commercial sex networks and prostitution, closely associated to problems with sexually transmitted diseases and an increase in crime and violence in communities proximal to their operations. These impacts will disproportionately affect women and girls within the local communities either directly or indirectly.

[…] The Project will influence the increased transmission of sexually transmitted infections (STIs) through the “four m’s” of “men, money, mobility and mixing”. This is an acronym that is often used to describe the influence of extractive industry development and determinants that may influence an increased risk for the transmission of STIs. […]People (generally men) who benefit directly and indirectly from the Project may have more money available to partake in forms of transactional sex. The poor and vulnerable sectors in the community may be more susceptible to advances for opportunistic transactional sexual encounters with the risk of a “sugar daddy” phenomenon developing, where men that have disposable income entice young girls, who are vulnerable through poverty and lack of opportunity, into transactional sexual relationships. […] The temporary construction workforce is a high-risk group as they will have disposable income with limited entertainment opportunities. Those workers residing in the temporary camp (between 500-920 workers) will have limited exposure to communities, minimising this risk. However, up to 370 workers may reside in hotel accommodation in Jermuk during the peak of construction making commercial and transactional sexual relations likely in the communities in the study area.

[…]All communities are susceptible to the impacts related to social issues, though Jermuk will be most likely to experience changes because it will accommodate up to a maximum of 370 workers during construction and approximately 250 workers during operations. Gndevaz is also likely to be impacted through its relative proximity to the temporary construction worker’s camp. […] The magnitude of the impact is high as the characteristics of the town of Jermuk change (from a family tourist area to an area that also will accommodate a significant proportion of the mine workforce). These workers will live in Jermuk for several years and will therefore alter the balance of tourists to semi-permanent workers for the duration of the mine’s life.”

To mitigate issues related to prostitution and spread of sexually transmitted infections, the company plans to not only support women’s empowerment and education programs to avoid the temptation to be involved in forms of transactional sex work, but also ensure widespread availability and social marketing of condoms in the workplace and accommodation areas.

The full description of the ESIA can be found here.