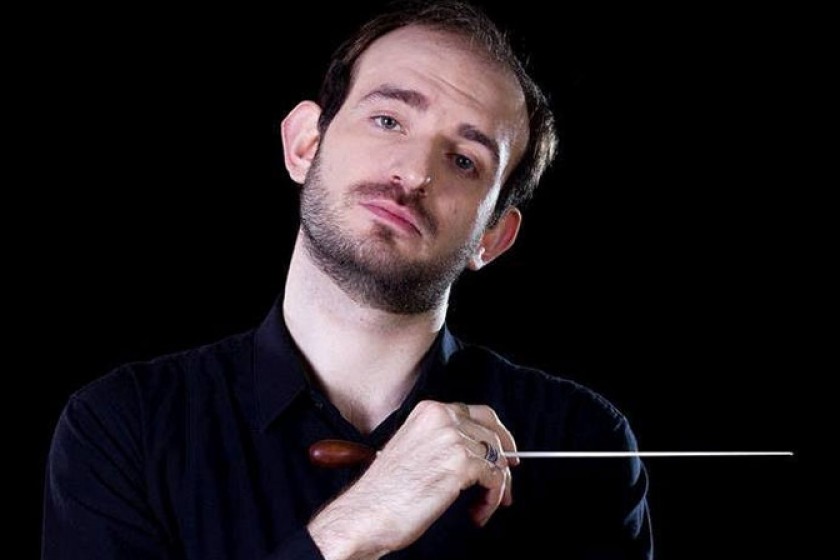 I’ve discussed a variety of topics with composer, conductor Alexander Iradyan over the years.

After graduating from the Komitas State Conservatory of Yerevan and having an interesting period of musical activity in Armenia, Iradyan continued his education at the Royal Conservatory of Belgium.

In summer 2016, when we were sitting together at a Yerevan cafe, he said he was thinking about quitting his education in Belgium and moving to Berlin. I said it was foolish, as he didn’t speak German, and Europe is Europe in any case. He looked at me. Two frowns appeared on his wide forehead, and said he’d decided to go to the Berlin University of the Arts (UDK):

Germany welcomed him with a few concessions. Iradyan had passed through a comprehensive competition process. Out of hundreds of applicants, only two managed to become university students, Iradyan and an ethnic Chinese conductor. At the time of the below long-distance interview, Iradyan is preparing for his Berlin premiere of "The Last Night".

When we were talking about you moving from Belgium to Germany, I couldn’t really believe it was possible. You did as you said. Can you talk about the reasons more specifically now?

I think it’s a very individual question, a question of aspirations and benchmarks of a person. I strive for more. I can only say that I was going through a stagnation phase in Belgium and I realized I was not going anywhere. I was in the center of Europe. We talked about it. You have seen it. Unfortunately, the Royal Conservatory wasn’t what I expected. There was an issue of care. In terms of my musical activities in Belgium, obstacles were created for a simple reason; the cultural and musical community did not show any support. The last time I received a project rejection from the Conservatory elite, I decided that was the end, I couldn’t see myself a student there anymore.

In other words, it was first the environment that made you move to another country.

Yeah, it was like that. I was alone. Had the loneliness only been physical, it might have caused no problems. But I'm used to, or, we can say, I have an internal belief that people should gather around a good idea, get inspired. Big politics of the big world shouldn’t inhibit young people’s dreams.

There’s also an issue of specialization. A conductor is a single soul. He comes with his music scores, on which he’s worked a lot, he practices, then closes his scores and stays alone in the hotel again. These two issues made me shrivel up. I realized that I needed to seek out new shores.

And it happened that out of a few hundred applicants, I was selected as a student in one of the best European universities. They could have chosen from hundreds of applicants, say, ten or twenty, but they are satisfied with one or two. It’s because they can assure a perfect environment and education for these one or two. The structure of the educational system is the best example of that. I have a professor, Steven Sloane, who has an assistant, Harry Curtis. This assistant treats us like his own children, our issues are his issues, our day is his day. And it's a gorgeous advantage.

I found an institution where they prepare first class conductors. Such an education is quite difficult to find elsewhere. It’s a very expensive education in all senses. I cannot say how much money is spent for two years of conductor training, but the investment is quite large. One or two days per week, we have an intensive orchestra course, which means that a whole orchestra is paid just for us, so that we can conduct a new work that has been our assignment for that week. In Belgium, I conducted only four projects in two years. In Berlin, it’s been 17 projects during six months.

You were saying that after moving to Europe you had an acute feeling (you called it "art suicide") and if you put an equal sign next to it, then it would be the same as capitalism.

Now I can stress it even more, because day by day, I see, feel, and acutely realize where the commerce and "labeled" collaborations lead. The problem of pure art and artistic environment are even left out of the agenda. Unfortunately, when you offer to collaborate with a musician, an artist, they first ask how much they will be paid, without even listening to the proposal’s true meaning or potential.

This situation scares me. Every day I feel on my skin, how buying and selling ideas is akin to selling cheese. It costs 20 euros. It’s yours if you have the money. If not, “a respectful goodbye and see you”. 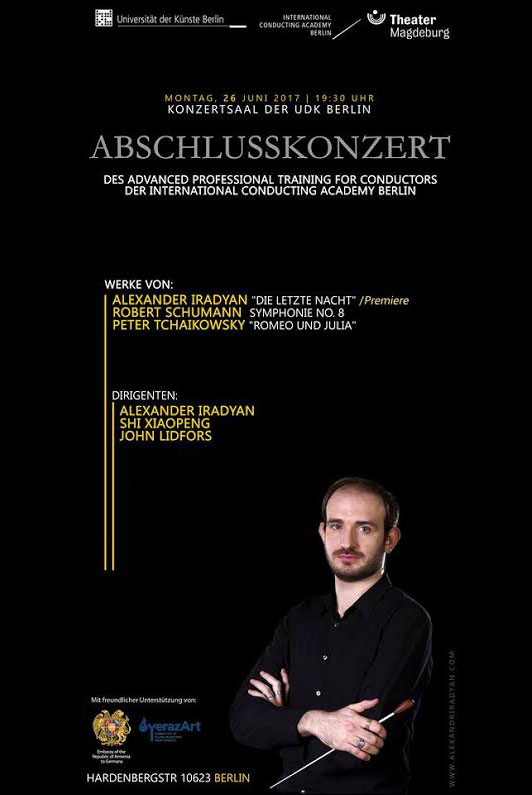 Any accomplished, invited musician, conductor or someone else from the musical world, however, has a clear mathematical approach, a “market price”, set by themselves or their agents.

Yes, I also have such definitions.

In that case, why are you so afraid and irritated. It happens to everyone. It’s nothing new. Judging from the quality and workload of your education in Germany, I can say that this very institution already defines a "price" for you, which is quite high.

I understand what you mean, but what I say is a little different.

At a professional level, everything, indeed, has a price. The definition of the price is important and competitive. But if you are a real artist, if you haven’t become a technical or political model that performs, receives, leaves, then you can still analyze, still believe that there are ideas and things that are of value in themselves, and you can’t get into the market mood when dealing with them.

My professor says there is a golden triangle for accepting a proposal, where every corner has a meaning. One is financial, the other is career development, the third is aesthetics. If there are at least two out of those three, you must agree to the proposal. In Armenia, for example, the financial angle is almost always missing, but it’s more or less good for career development, and as for aesthetics, it’s where it should be. I got convinced of it when we performed a ballet at the National Academic Theater.

What other concerns do you have there in Germany?

Everywhere, I have time to rid myself of anxiety. It’s been half a year that I am here, but it seems it was yesterday that I arrived. I realize, of course, that I’ve gained many things, but at the same time I cannot separate myself from time. I often think about justice. Both here and in Armenia. Wherever I am, there are matters that make me think about justice. As for loneliness, we’ve already talked about it.

Can you imagine yourself working as a conductor in Germany?

Definitely. Armenia’s limitations and many other concerns will have me travelling for quite a while. I feel I’m in the right place now, and I also realize that this place needs me.

It’s not only the limitations that concern me, I just don’t want to go in details of other aspects of Armenian reality which are the results of capitalism, finances, ambitions, and things like that.

I don’t say you can magically have everything here, but whatever is proposed, is being discussed and often implemented. That’s when you realize the positive sides of the Academy. You feel that you are in a highly respected place and that you can’t leave unaffected. That's why I appreciate being here.

Let’s talk about the "The Last Night" ballet, scheduled to premiere on June 26. Why has this historical night of 1917, the night when Russian Emperor Nicholas Romanov’s family is anxiously awaiting the decision on their fate, been selected?

The choice was not mine. I received an offer from a Russian opera theatre to write a new ballet. I started working on the idea and got so inspired by the events of the historical night, that I started to work on the ballet’s concept.

Unfortunately, the partnership didn’t work out, but I held on to the idea. Already having creative freedom, I linked it to another topic about a family placed in a Nazi concentration camp in 1943. This family also awaits a decision about their fate. This waiting and the accompanying hope are at the core of the ballet.

Why did you include this family’s waiting?

Totalitarian power, which can kill people and their dreams, should be a historical example for any new government to avoid. Perhaps the planned crimes are not so obvious to us any more, perhaps they have another context, other methods, but human emotions and the horror of expectation are expressed in the same way.

Sometimes, to prove their worth, I see people strangling and squashing others. This is a great tragedy for me. Clashes that arise among people usually result from their emptiness or evil. I can never tolerate this hatred.

The premiere, if I got it right, is not about the ballet performance, but the music.

Yes, on June 26 there will be a premiere of a 17-minute ballet suite in the UDK hall. Besides the orchestra, there is also a choir whose recording we've already done. It’s wonderful. This is the first step. I might start thinking about the ballet performance afterwards.

It’s interesting how the music, containing those historical layers, will be received by the audience.

If you transform all the notes into words and letters, you’ll receive information, a part of which is hidden in a way that is difficult for anyone to guess. There is a lot of risky information that is of historical and political nature.

You cannot write about revolution until you go deep in those layers. We often know the ending and the consequences of the historical act, its victims and participants, but the real motive and the base are often hidden. This ballet needs a lot of work to be decrypted, but that’s not the aim, of course. I've got it exactly the way I imagined. The audience should feel how horrible it is when there’s the possibility of the crime repeating.

For us, the story that happened is not a tragedy if the same does not happen to us. In other words, it’s the crime that continues to be perfected, and not humanity, which already knows that something like that has already happened. The music written on that basis cannot be simple and primitive.

Do you remember, the last time you were in Yerevan, you said that Kafka's "The Trial" amazed you because you could not understand what happened.

Yes, of course I remember. I haven’t stopped thinking about it. Now I feel like Kafka’s K. in the Berlin underground.

Being convicted is a given from the start. The question is how to skirt the absurdity in which you daily find yourself. Or, rather, can you really evade it without losing yourself and your values?