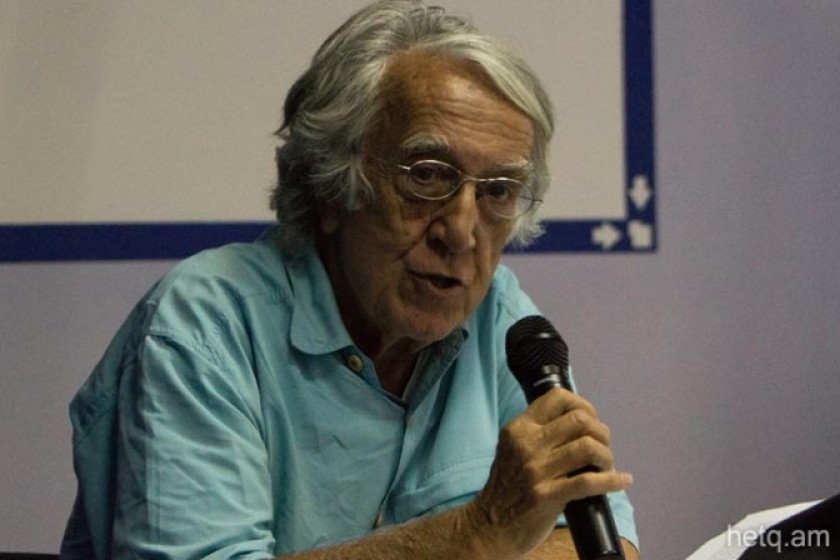 David Barsamian: “Journalists Should Not Have Any Friends”

David Barsamian is the founder and director of Alternative Radio in the United States. In addition to running audio projects, he has authored books with several well-known intellectuals, including Noam Chomsky, Edward Said, Arundhati Roy and others.

On June 6-9, Davit Barsamian gave three lectures in Yerevan, on U.S. foreign policy and its targeting of Iran, capitalism, the environment, propaganda, as well as the role of the media in these issues.

"The media like to present themselves as objective, balanced and free from bias or agenda. But the reality suggests something very different. The media function as a weapon of mass distraction," says Barsamian.

Media and the authorities are exposed to the influence of large corporations, and the idea of democracy is questioned. When choosing allies, the United States is guided not just by democracy and human rights principles, but economic, military, and other interests that turn into allies the countries known for repressions and human rights abuses (Turkey, Saudi Arabia), and, instead, target others (Iran).

Science is also being exposed to the impact of corporate influence, when articles that deny climate change or the connection between smoking and cancer appear, ordered by industry firms of fossil fuels or cigarettes. The U.S. President Donald Trump called the climate change "a hoax", and the American media reduced the coverage of the issue by 66% in 2016. In Barsamian's opinion, whatever is happening with the climate is the greatest threat facing humanity.

He proposes to challenge the word of the government (often spread via the media) and think "outside the box." "We cannot give them that weapon to use against us. We have to think outside the box, in creative ways." he says.

David Barsamian is also a journalist, he’s covered the situation in several countries - in Iran, Pakistan and elsewhere. He’s been barred from entering India since 2011, due to his work on Kashmir and other revolts. "Real journalism is investigative, it’s interrogating, it's challenging assumptions," he says.

The last time he was in Armenia was 38 years ago. He’s visiting Yerevan now to give talks at the invitation of the Commune Social and Cultural Platform.

Hetq talked to David Barsamian on several issues related to the topics of his lectures.

This is your first visit to Armenia after decades. How would you define the political system in Armenia?

The political system here in Armenia… There is a semblance of democracy. That is to say - you have elections, you have members of parliament, you have ministries. But democracy cannot be defined by simply having elections. It must have real substance.

You might have heard about Amulsar gold extraction project, and about the Aurora award. Many people say those who fund a gold mining project cannot organize a humanitarian award. Others say they are separate matters and shouldn’t be judged on an equal footing. What is your position?

I think you do have to judge them equally, not separately.

If I am a wonderful, kind gentleman with you and then I go to the next room and I am cruel and beat someone, is it the same person? Yes. And of course, you must judge a person or an organization by their values. And if they are looting the country of its natural resources like gold and then creating a prize as a distraction and entertainment, I think there’s a real contradiction there.

There must be respect for the environment and respect for human rights. It’s not some toy or ball that you throw up and then you catch. It’s a real thing. It shouldn’t be manipulated for propaganda purposes to cover up the bigger crime of looting the earth and accumulating wealth for a small group of people - wealth that will not benefit the Armenian people, but the owners of that gold mine. 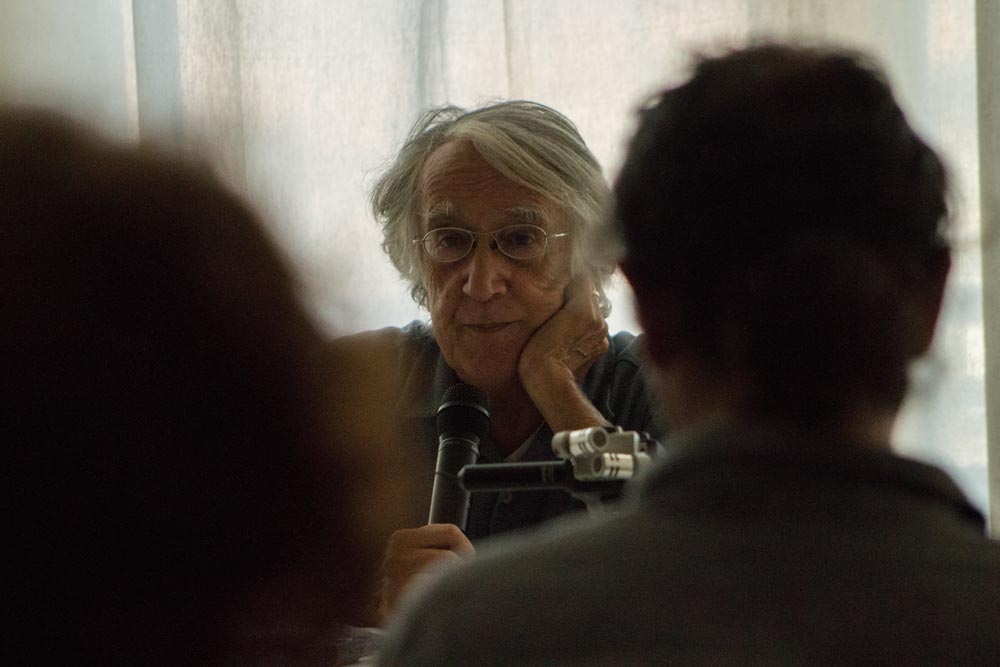 In one of your talks, you mentioned scapegoating. Trump blames Mexicans, Muslims, refugees and Islam for the Americans' “misery”, thus distracting them from the real threats. Similarly, in Armenia, the authorities always point to national security and Nagorno Karabakh issues when faced with public dissatisfaction and the possibility of political change. The media, as part of this discourse, are usually biased on this issue. What do you think the role of the media should be in resolving the conflict?

In resolving the conflict or on any other issue, the role of the media is to speak the truth, to provide citizens of the country with real information, not propaganda, not garbage that is produced by some public relations firm on behalf of some corporation, saying how wonderful they are and how much they love Armenia and its culture and things like that.

There is a saying in America – “the role of journalism is to comfort the afflicted - those who are poor, and to afflict the comfortable - to make those people who are comfortable, uncomfortable”.

On this issue, you have to figure out some solution, otherwise it’s going to continue to bleed the country dry in terms of resources. It creates more and more militarism in the country and it feeds racist ideas about Muslims, Turks and Azeris; ideas which are dangerous.

I’m not in favor of racism of any kind. We are the victims of racism; we were scapegoated by the Turks to be blamed for the collapse of their empire. Thus, scapegoating is extremely dangerous and we should be very careful about how politicians want to manipulate us to achieve certain goals that they have in mind, which will benefit them, but not necessarily the people in the country.

Who do you regard as intellectuals and what’s their role in dealing with social issues?

Antonio Gramsci has written about this extensively, as has Edward Said and Noam Chomsky. I think the responsibility of intellectuals is to be an opposition, not to be cheering for the rulers and the elites, to provide inspiration, as well as analysis in language that is clear and plain. This is one danger many intellectuals have succumbed to. They use a language that people don’t understand, with very complicated words.

And intellectuals, be it James Baldwin, Malcolm X or someone like Noam Chomsky, whom I have worked with a lot, are very courageous. They are not afraid to criticize people with power. In fact, it is a duty.

Intellectuals are usually in privileged positions. They are university professors or they have some other college teaching position. So, they are already in the upper echelon in terms of class, they are able to effectively criticize the system. That’s what people need - effective critique and language that is clear and is open and transparent. 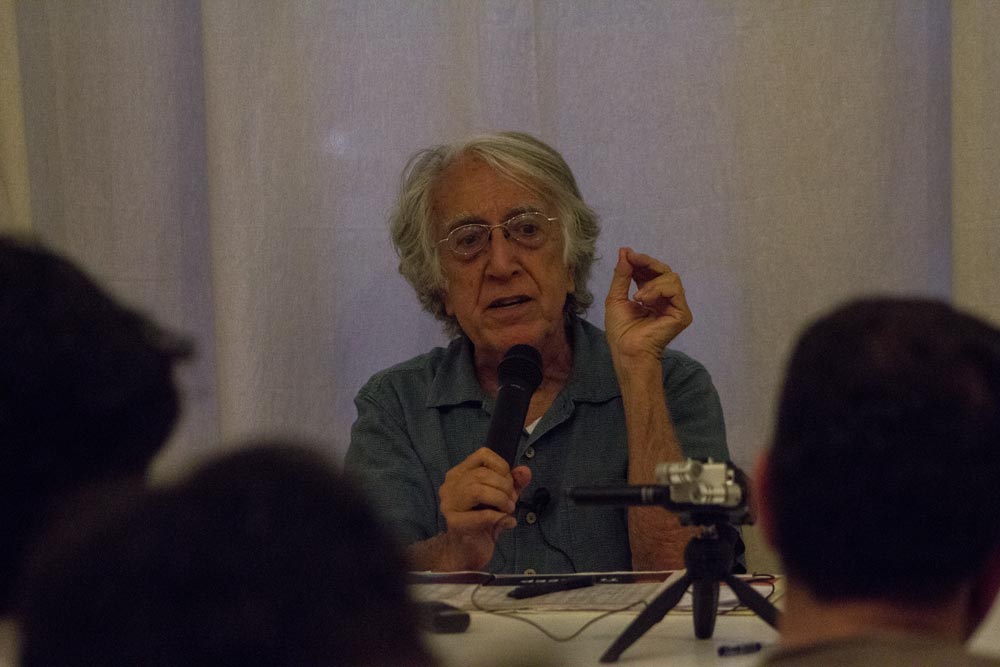 Where does change come from?

And that is because the bottom represents the grassroots, popular opinion, not elite opinion which is at the top, which wants to keep the status quo maybe with a few superficial reforms: if you put some pressure on me, I’ll give you some better wi-fi service in your particular district, but that’s all I’m going to do for you. But now, you have to change the whole structure of the government, of society, to have less income inequality.

That’s a big issue in Armenia, and it’s a big issue in the United States too, that the rich are getting richer and the rest of the population is either staying in the same place or they’re getting poorer. So, you have an unequal distribution of wealth. Intellectuals should be talking about this.

Change comes from below. It happened in numerous social struggles all over the world, like the American Revolution, the French Revolution, the Bolshevik Revolution. The energy came from the bottom - from the masses.