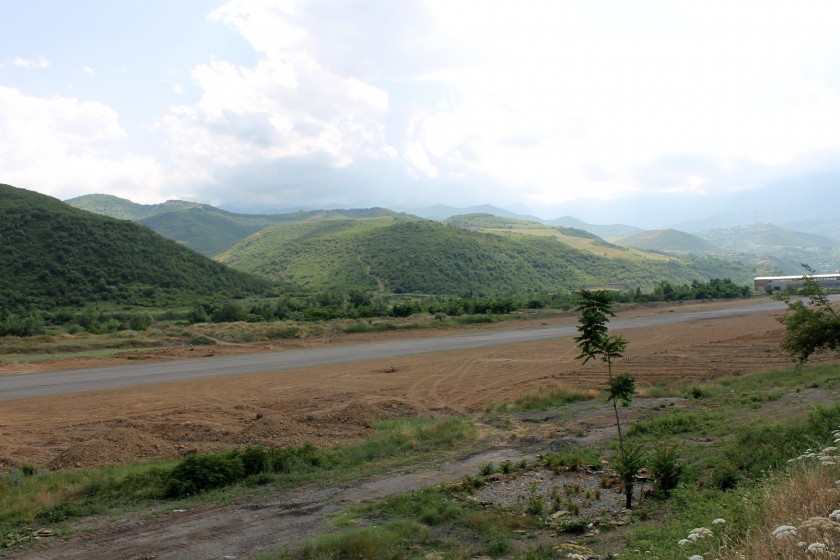 Armenia’s Kapan Airport: $2 Million Project Will Let Passengers Fly to Yerevan for Around $42

It will cost around 20,000 AMD (US$ 42) to fly one way from Kapan, the regional capital of Armenia’s Syunik Province, to Yerevan, the country’s capital, according to the province’s governor.

The airport plans to open by the first half of next year, if all goes according to schedule.

Recently, Hetq had contacted the provincial governor, Vahe Hakobyan, about news that the Kapan airport might be put back into service after many years of disuse.

A $42 one-way fare, naturally, is expensive, not only for Kapan area residents, who may need to get to Yerevan in a hurry for emergency medical service, but for Yerevan residents as well.

The flights, if started, will take just forty minutes to traverse the 195 kilometers by air. Driving from Kapan to Yerevan takes around five hours, and taxis make the trip for 6,000 AMD. The driving distance is some 300 kilometers.

The Syunik Provincial Administration told Hetq that the Kapan Airport is gearing up for regular round-trip flights to Yerevan and back, and that, at present, no additional destinations are in the works.

Such domestic flights will be the first for Armenia ever since the collapse of the Soviet Union.

Perhaps, given the costly price announced, the Syunik Region Development and Investment Fund (SRDIF) has said that it would subsidize airfares for those passengers who have medical emergencies and need to get to Yerevan as quickly as possible. 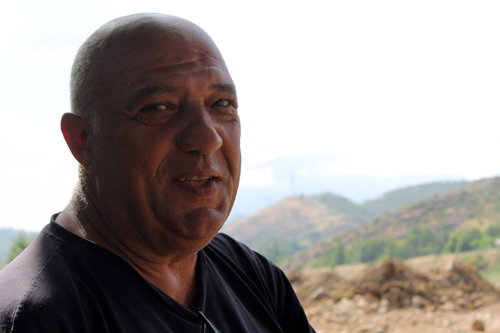 As we go to press, work is underway to repair the Kapan airstrip and to draft blueprints for a passenger terminal to accommodate 100 passengers per hour.

Hetq reporters visited the Kapan Airport in June of this year and talked to aerodrome engineer and builder Gevorg (Gagik) Ghazaryan. The Syunik governor had invited him to come down from Yerevan for consultations and assistance.

Ghazaryan says that work on the airport began on May 15. The airport needs improvements to comply with International Civil Aviation Organization (ICAO) standards.

The engineer says it’s not likely that the landing strip will be fully gutted and repaved by the end of the year. Instead, a company called Kapani Norogshin will be filling in all the landing strips potholes and evening out the surface this year. 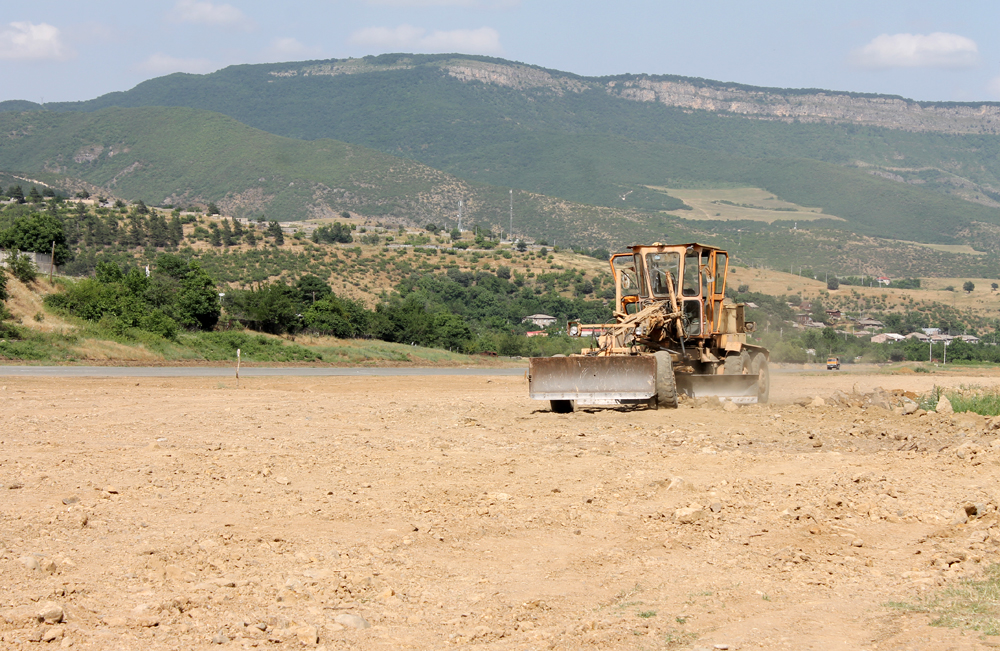 The airport’s landing strip is 1,590 meters long and 40 meters wide. Once refurbished, it will be certified as a “3C” class airdrome. This means the airport can accommodate planes with a capacity of 50-80 passengers.

Ghazaryan says the airport can be upgraded to accommodate larger planes if further improvements are made to the landing strip.

In the meantime, it appears that the Kapan Airport can operate as is, since it was never designed to service larger planes and has mostly catered to the Yak-40, with a 40-passenger capacity. Larger planes would also require a longer landing strip. 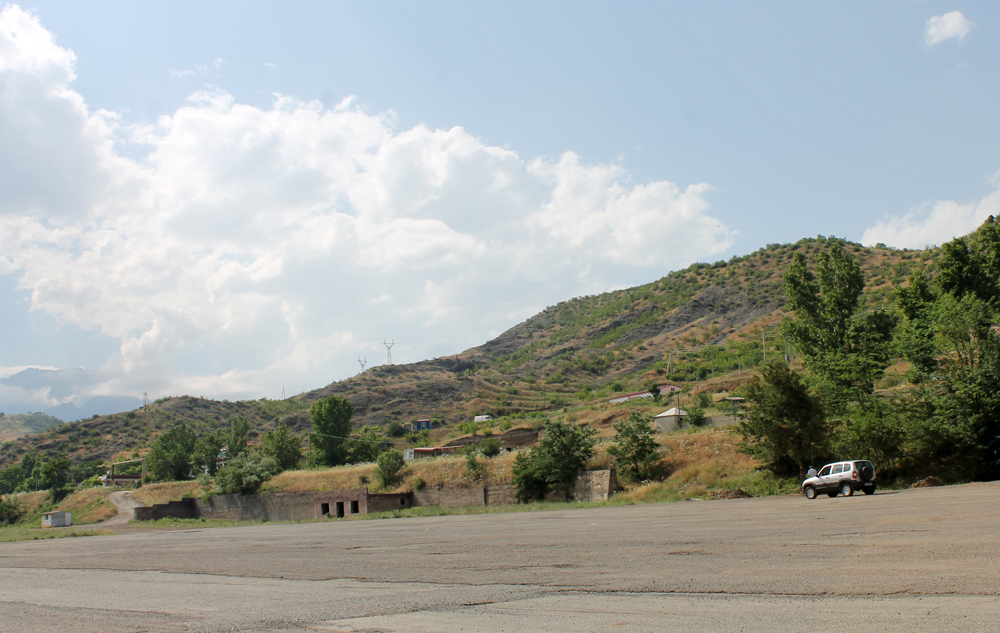 Site for the new passenger terminal

A parking lot is also planned for next to the passenger terminal.

The Kapan-Yerevan flights will operate according to Visual Flight Rules-VFR (a set of regulations under which a pilot operates an aircraft in weather conditions generally clear enough to allow the pilot to see where the aircraft is going), and will not be directed by air traffic controllers.

Such VFR flights are also permitted at night, and planes can also fly above cloud cover, just as along as minimum visibility criteria are in effect.

The Syunik Provincial Administration says there are currently no plans to install a lighting system on the landing strip, meaning flights will only operate during the daytime.

Hetq has previously reported that according to a 2000 government decision, the Kapan Airport has been handed over to the Kapan Municipality at no cost. 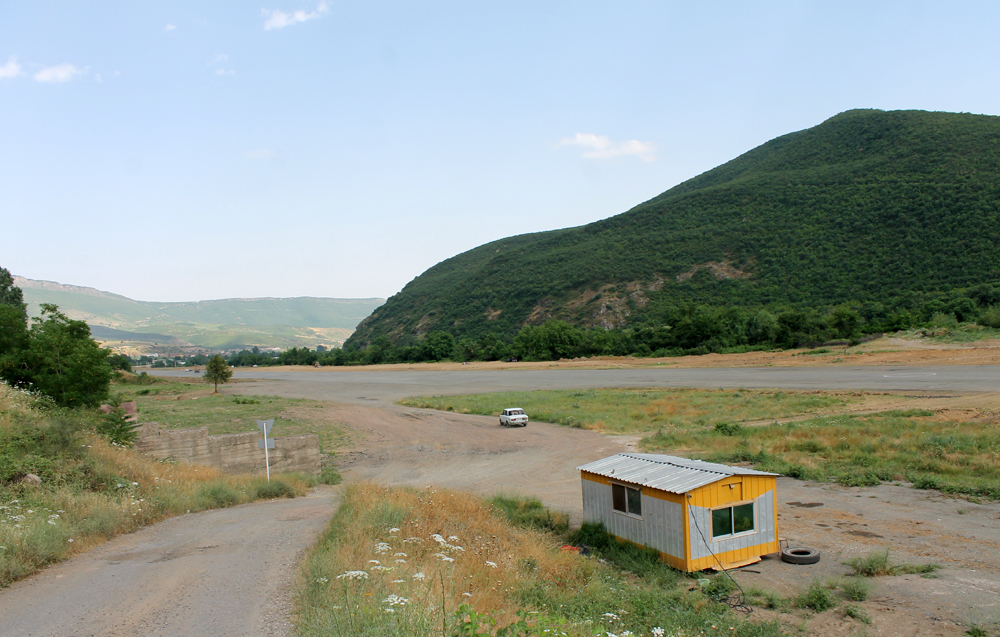 However, Kapan Mayor Ashot Hayrapetyan has said that talks are underway to lease the airport to an operator on a concession basis. The names of such possible operators haven’t been revealed yet.

Sahak Hakobyan, an advisor to the provincial governor, has stated that the operator will be a company that has the means to invest in the airport’s reconstruction.

Of note in this regard is the fact that the entire airport reconstruction project is being financed by the Zangezur Copper-Molybdenum Plant CJSC, a company with mining interests in the area, and the Syunik Region Development and Investment Fund (a government creation tasked with attracting investment and creating jobs in the area).

The provincial government doesn’t plan to allocate any budgetary funds for the project estimated to cost US$2 million.

When Hetq asked what airlines would be using the airport, the Syunik administration responded that at this stage it couldn’t provide any such information. What we do know is that the Czech-made L-410 Turbolet will be flying to and from Kapan. It’s a twin-engine short-range transport aircraft, manufactured by the Czech aircraft manufacturer LET (now known as Aircraft Industries), mostly used for passenger transport. The aircraft is capable of landing in small airports like Kapan.

Ural Mining and Metallurgical Company, based in Russia, owned 51% of Aircraft Industries from 2008 to 2013, when it purchased the remaining 49%.

Negotiations to purchase a 2016-made L-410 plane, designed to carry nineteen passengers, are winding up, says the Syunik Provincial Administration.

We can only get a ballpark figure as to what the plane will cost. An internet search comes up with several versions of the L-410, with various modifications, that have hundreds of hours of airtime.

They’re being sold for hundreds of thousands of dollars.

The L-410 to be purchased for Kapan is quite new and will probably cost much more.