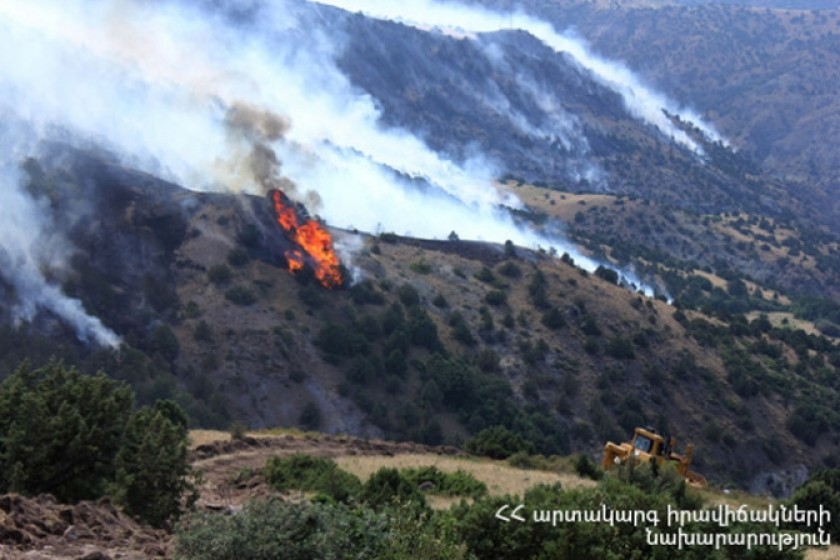 On August 10, a wildfire broke out on the tenth km of the Vayk-Saravan section near the village of Artavan, in Armenia’s Vayots Dzor Province. On August 12, another wildfire broke out in the Khosrov Forest State Reserve, which is one of the oldest protected areas in the world, located twenty km north from Urtsadzor village in Ararat Province.

Narine Kirakosyan, co-founder of Eco Media Journalist Club, who was in Artavan during the fire, says that people saw a burning bear rolling down the hill and rabbits running with burned paws.

Narine says the saddest thing is that there are burned areas that serve as crossroads for animal migration - bezoar goats, gray bears, and South Caucasian leopards. The environmental journalist mentions the burned juniper trees that will need many years to recover.

"It was noon on August 12 when people from Khosrov, who came to help in Artavan, left hurriedly, saying that there was a wildfire there", Narine says. 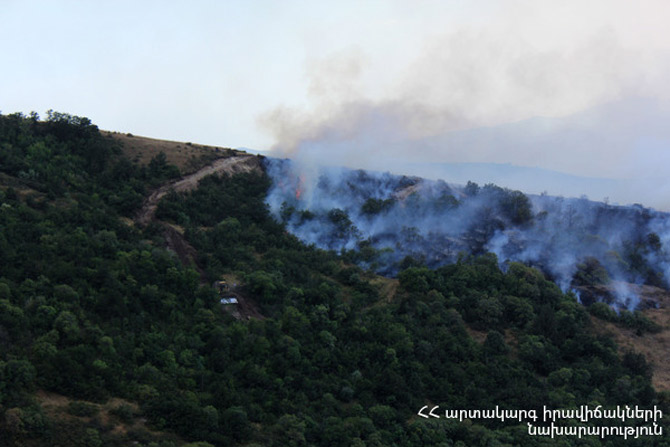 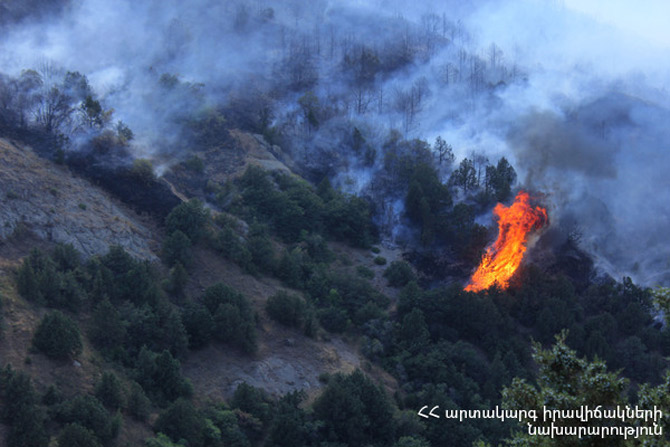 "It’s now clear that our government wasn’t ready. We saw what was happening from a technical point of view. Why did they ask another country to help with equipment? (at the request of the Armenian Minister of Emergency Situations, Russia has sent a tanker plane to extinguish the wildfire in the Khosrov Forest - author) Why is it that I go there as a journalist and only see people and no equipment? The only equipment being used there belonged to a private company, Lydian Armenia, and in the Khosrov Forest it belonged to a fish-breeding organization (Inter Aqua- author),” says Narine.

Narine adds that she has been in many countries around the world, and was in California during the wildfires in 2006-2007. But she has never seen extinguishing fire with cement, which was the case in Artavan. She says, “Imagine, you throw some cement, then comes the water and makes it solid like rock.” 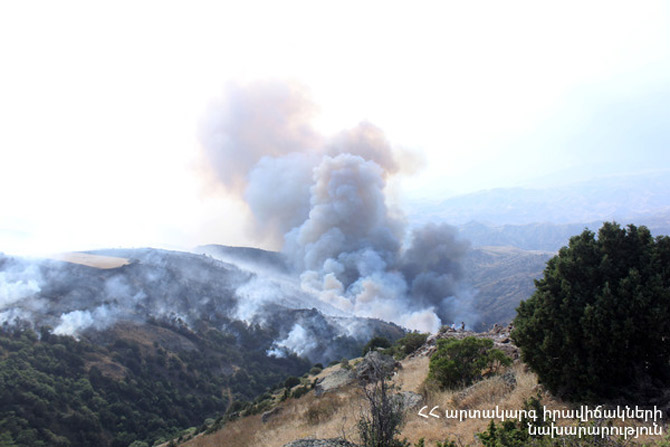 Levon Galstyan, a member of the Armenian Environmental Front, was in the Khosrov Forest yesterday. He says it’s still difficult to calculate the exact number, but many are saying that are thousands of hectares have burnt.

Levon says he doesn’t want to criticize, but no official information on the wildfire that ignited on August 12 was forthcoming.

"At first, we were informed that a fire broke out in the area of ​​around 100 hectares, after which there was no clear official information. We learned from other sources about the real situation. That means that the government didn’t want to present the real picture and couldn’t mobilize its forces to prevent the spread of fire as much as possible. They applied for help with an aircraft only after the situation got out of control,” the environmentalist says. 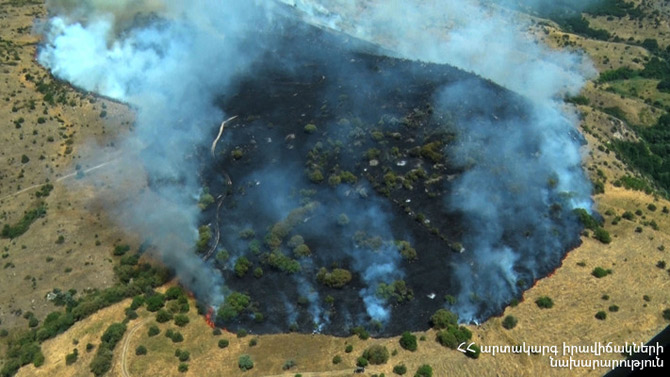 Levon says the main problem is the unpreparedness of Armenia’s government. It’s not about having or not having a firefighter plane, but rather about assessing the situation - what steps you take, what methods you use.

"On the first day, many people suggested that a plane should be requested as there was no other choice, but the decision makers didn’t want to. There were people who said it’s a shame to bother Russia with such a small thing. Thousands of hectares of forests were burning, but instead of correctly assessing the situation, they discussed whether it was shameful or not. Having such a government system is the real shame,”Galstyan says. 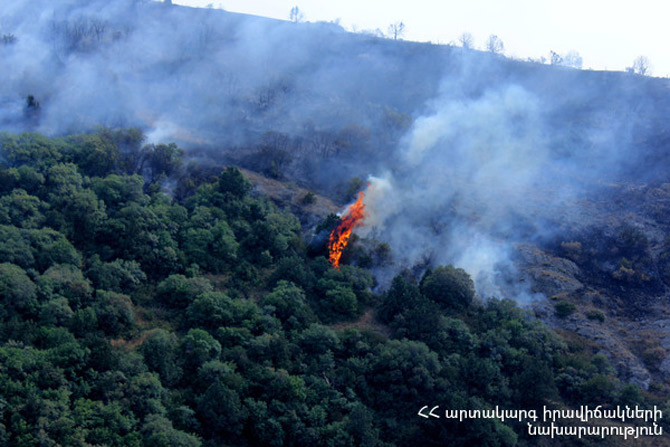 EcoLur NGO Director Inga Zarafyan notes that the number of fires in Armenia has increased by around 40%. She says this indicator shows that people in Armenia have no sense of responsibility and that the attitude towards nature has worsened.

"There were several wildfires in the Khosrov Forest last year, 2.5-20 hectares were burned, the same happened in Arevik National Park. Syunik Province with its Meghri region is the most vulnerable, since it’s the hottest part of Armenia. We should have been ready," Zarafyan says. 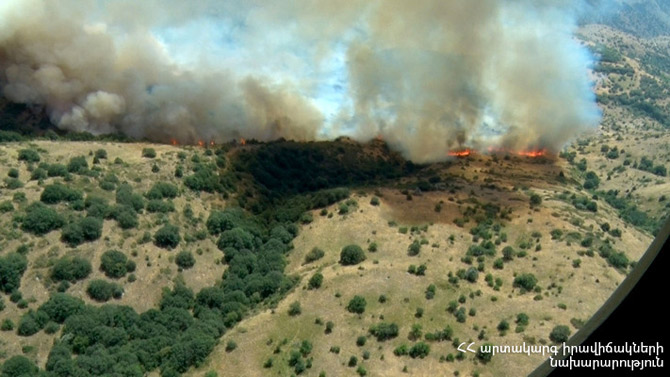 She says that the Ministry of Health should have appointed a shift in Artavan and Khosrov Forest, but that wasn’t the case. "There should have been official information instead of journalistic articles. It looks like all our governing bodies are sleeping, " Zarafyan adds.

Khosrov Forest State Reserve was established in 1958. The area, according to the Ministry of Nature Protection, is 23,878 hectares. Among preserved objects, there are four types of landscapes, unique flora and fauna.