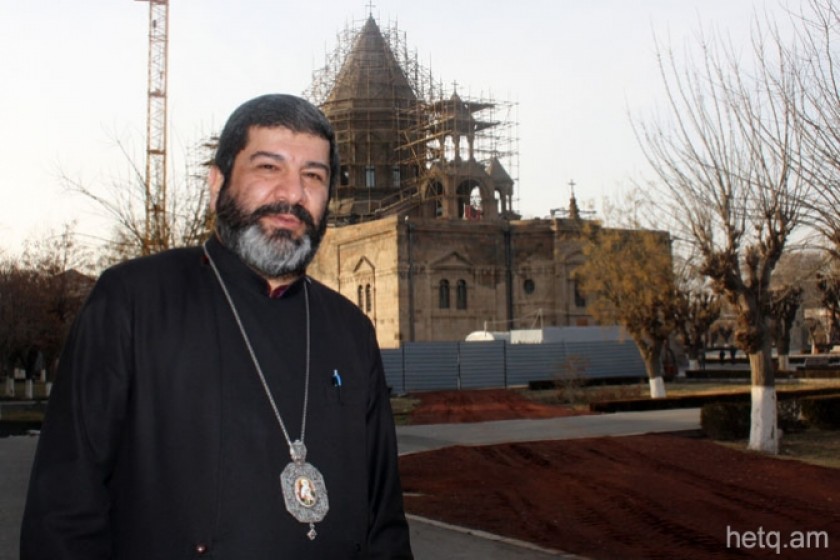 The meeting resulted in a joint statement declaring that the Diocese of the Armenian Church in Georgia regards the Holy Resurrection Church as Georgian and that it has no claim over it.

Hetq contacted Bishop Vazgen Mirzakhanyan, Primate of the Armenian Apostolic Church of Georgia, about the statement and other related issues.

Your Holiness, did you sign the joint statement, saying that you do not dispute the fact that the Gumburdu church is Georgian?

Yes, I signed. But who disputes this fact that I should dispute it. It’s long ago been proved to be a Georgian church. No one can prove it’s Armenian.

Samvel Karapetyan, who researches Armenian architecture, wrote that fragments of stone crosses unearthed in the churchyard prove the existence of an Armenian cemetery in the Middle Ages. They date to at least the 15th century, indirectly verifying that the Holy Resurrection Church had already been consecrated as an Armenian Apostolic church and was operating as such.

Samvel Karapetyan never said it was an Apostolic church. Only a part was Apostolic. It occurred in 1830 when they built an adjacent wooden vestibule as the Holy Resurrection Church. The church was never fully Apostolic. It’s Georgian. What’s right is right.

But the church has long since served the local Armenian community.

The entire church hasn’t been used, just the western vestibule. In the 1830s, the people filed a request with the Georgian Synod to use it as a temporary Armenian church. Why did they file such a request with the synod if it wasn’t Georgian?

They filed requests with the Georgian Synod and with Etchmiadzin.

And what about the six other churches whose ownership is now under question. I’m referring to Saint Norashen in Tbilisi and Saint Nshan in Akhaltskha.

No, they were never Georgian, and the Georgians don’t claim otherwise. They say these churches are Armenian. They were built on the sites of ruined Georgian churches.

Do you know when the Georgian Orthodox Church took ownership of the Gumburdu church?

It was in the 2000s, or before. Maybe in the 1990s. They are now restoring the church to look as it did in the 10th-11th centuries. There’s no Armenian element. We must be straight with them so that they are sincere with us. Tomorrow, when we make demands, we want them to take a similar approach on matters that concern us. The Georgian government and patriarchate are very troubled over the matter and are doing all to resolve it amicably. The Georgians are favorably disposed to our community and to Armenia.

Has the Armenia Apostolic Diocese in Georgia ever undertaken the installation of a stone cross at the Gumburdu church?

Never. That was an initiative of area residents, not us.

Have residents asked you to consecrate the stone cross?

The people wrote to the government and church leaders of Georgia and Armenia about all that. We went and met with the people. We learnt that a permit was needed to erect the stone cross. The community must negotiate with the Georgian Orthodox Church. It’s not our problem. The Georgian government also needs to be involved in the negotiations for allowing the erection of the stone cross. I believe we’ll have something to report soon.

Is there any final decision regarding the installation of the stone cross?

No, not yet. Work is underway. It’s not important if it’s this cross or another one. We’re not focused on the cross. We’re resolving more principled matters for our people.