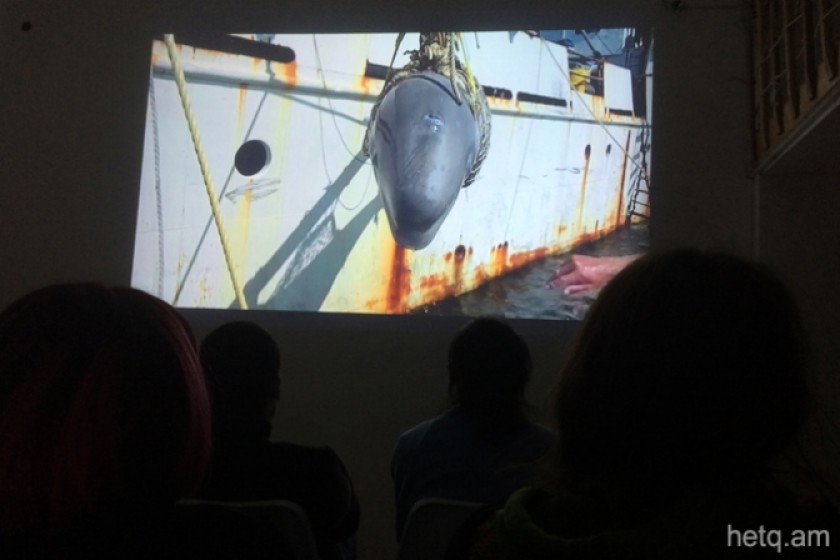 Guests at the Best Western Paradise Hotel in Armenia’s northern resort town of Dilijan may be surprised to see two bottlenose dolphins swimming in a pool under the hotel.

Hotel management says that another company owns and operates the dolphinarium. This company claims that the mammals are being used to provide medical therapy for a host of ailments, despite growing public opposition.

Animal lovers and others suspect the hotel is merely exploiting the animals to attract business.

Those opposed to using the dolphins have launched a petition drive, arguing that the mammals are being kept in unhealthy conditions and are limited to a small enclosed swimming pool.

Yesterday, in Yerevan, the Commune Social-Cultural NGO, organized a debate on the plight of the dolphins and showed a Russian film entitled “Born to be Free.”

The film documents how dolphins and other sea mammals, especially Beluga whales, are captured and transported to different cities in Russia and other countries. Some die in the process, and others are injured.

In the wild, dolphins swim an average of 150 kilometers, at a depth of 100 meters. Dolphins at the Dilijan pool are restricted to a few meters of swimming space.

Gayaneh Petrosyan, who directed and cowrote the film, offered the film at no charge to be shown in Yerevan. She participated in the Yerevan debate via Skype.

She said that children swimming in the pool with the dolphins, allegedly for medical therapy purposes, can become infected by wastes secreted by the animals.

Anna Shahnazaryan, a member of several environmental initiatives in Armenia, told the debate audience that the hotel was using the dolphins as a back-up business venture.

Best Western Paradise claims that it is not affiliated with Dolphin Therapy Dilijan (the outfit operating the business), and that it stopped collaborating with the company on November 1.

News that dolphins had been brought to Dilijan started to circulate in the social web this past September.

Word of the Dilijan dolphins plight even made it to the pages of the British news outlet DailyMail.com.

A November 10, 2017 article called for a boycott of Best Western Paradise in Dilijan, noting that a British marine mammal charity had launched a fight to rescue the dolphins “kept as a tourist attraction in a subterranean swimming pool under the hotel.”

“The stressed and lonely creatures under the Best Western Paradise Hotel Dilijan - not far from the Armenian capital of Yerevan - see little natural light or hear other creatures. They swim endless laps of the pool built originally to accommodate human guests and are offered up as a dubious form of 'therapy' to 'cure' sick children.”

The author quotes Marino as saying, “Dolphins are not healers but smart sociable predators and they shouldn't be used to cure the ill.”

The Daily Mail article goes on to quote hotel guests as taking Best Western Paradise to task for its cruel treatment of the dolphins.

Best Western Paradise Director Vahagn Harutyunyan, in an interview with Armenia TV, publicly stated that the dolphins didn’t belong to the hotel, but rather to the Sochi Dolphinarium. The hotel also says that it does not own the pool holding the dolphins.

A few days after the Daily Mail article appeared, Best Western Paradise, օn its Facebook page, published a letter from the Sochi Star of the Sea Dolphinarium saying  they  merely agreed to collaborate on sales and marketing until November 1. The Dilijan hotel and the dolphinarium, the letter says, are two separate companies with nothing in common other than they share a common entrance to the building.

The Russian company claims that the two dolphins were born in captivity and that the animals in Dilijan are well looked after.

Despite these claims from Best Western Paradise, environmentalists in Armenia point to a permit issued by Russia’s Federal Service for Supervision of Natural Resources Management showing that the importer of the two bottlenose dolphins to Armenia is listed as Paradise Hotel LLC.

“This is clear-cut deception. The only document on the matter shows the hotel as the importer,” says Anna Shahnazaryan.

In September, in a response to a Hetq inquiry on the importation of the dolphins, Anoush Harutyunyan, who heads the Information Division of Armenia’s State Food Safety Service, stated that the dolphins were imported by a company called DelfinTherapy Paradise LLC.

Now here’s where it gets interesting.

The very same Vahagn Harutyunyan, who now serves as the Director of Best Western Paradise (Dilijan), served as director of DelfinTherapy Paradise LLC until October 24 of this year.

The Dilijan dolphins remain in their artificial environment, promoting a ‘medical therapy’ business that raises more concerns than cures.

The best efforts of Best Western Paradise to distance itself from the dolphin furor haven’t worked.

By the way, why isn’t Armenia’s environment ministry looking into the matter? Or is it that they just can’t be bothered.

Silva 2019-01-25 08:30:29
հարգլիներս դուք հիմնավորումներին բացարձակ ծանոթ չէք եթե չունեք տեղեկատվություն գոնե հարցրեք
Հրանտ Գալստյան 2019-01-25 08:30:29
Ողջույն Սիլվա: Շնորհակալ եմ գրելու համար: Ի՞նչ հիմնավորումների մասին է խոսքը, կարո՞ղ եք ներկայացնել:
Marina Ossipova-Shakhbazyan 2019-01-25 08:30:28
The Armenian people know what suffering and genocide are from their own history . So suffering and humiliation, turning other sentient and thinking beings into slavery should not leave them indifferent. The dolphins belong in the seas and oceans, and not in chlorine pools with water filled with bacteria They have the right, like every creature on the planet, to live their lives with their families, swim, hunt, swimming up to 50-100 km per day. Leave them just be wgere they are : in the wild, in their own homes. Don't be cruel and indifferent!! #Emptythetanks, #Dontswimwithdolphins!!!!
Anna 2017-12-13 05:52:43
Free the dolphins! Stop animal cruelty & cruelty for profit! Shame on you!
Anne van ingelgem 2017-12-05 14:30:15
Free the dolphins