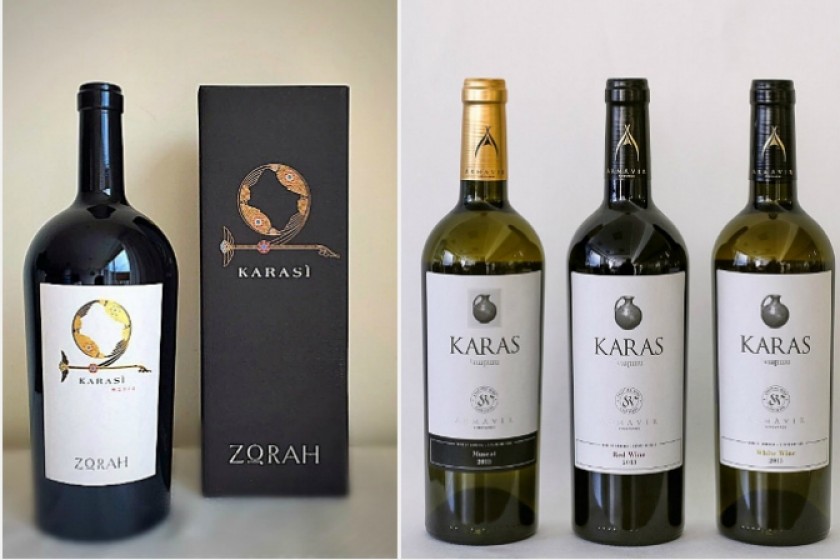 Two diaspora Armenian winemakers are facing off in a Yerevan appeals court over a trademark dispute.

It’s the labelling on the Zorah bottle (top photo, left), that prompted Eurnekian’s company to go to court. The company argues that Gharibyan is using the main element of its “KARAS” trademark, (the word KARAS) to sell his wine, and that this is a trademark infringement.

Eurnekian’s company won the first round in a lower court, but Gharibyan is fighting back. This is what happened.

Saki and Sons CJSC, which produces Karasi Zorah, is a third-party litigant.

"I could never think that I would go to court against another diaspora Armenian. He’s a winemaker himself and he tries to hinder me. It's absurd,” says winemaker Zorik Gharibyan, whose 2010 Zorah “Karasi Areni Noir”, a dry red, made it to Bloomberg Business Weekly’s top ten of the world's best wines.

In May 2016, Administrative Court Judge Hrach Ayvazyan rejected the claim, noting that according to the Administrative Procedure Code, the plaintiff missed the two-month deadline to challenge the administrative act. (Ayvazyan has since found in favor of Tierras de Armenia).

Tierras de Armenia then applied again to the court, noting that they based their claim on the Law on Trademarks, under which the disputation deadline was five years. Judge Ayvazyan didn’t change his previous decision, and the winemaking company applied to the Court of Appeals. The latter, recognizing that there was a legislative contradiction, satisfied the complaint and sent the case back to the lower court. In September 2016, the suit was reinstated to Ayvazyan.

One diasporan winemaker sues another

Tierras de Armenia CJSC has stated in its claim that the company filed an application to the Intellectual Property Agency for registering the KARAS trademark on September 17, 2011.

Saki and Sons filed an application with the same agency on October 4, 2011, to register the Z KARASi ZORAH trademark. In December, Tierras de Armenia filed a written complaint against Saki and Sons application, arguing it was subject to refusal since the Z KARASi ZORAH trademark was similar to its KARAS trademark. The agency rejected the complaint and registered the “Z KARASi ZORAH” trademark in March 2012, and KARAS was registered in June same year. Four years after the registration, Eurnekian's team decided to sue the state department and Zorik Gharibyan’s winemaking company. 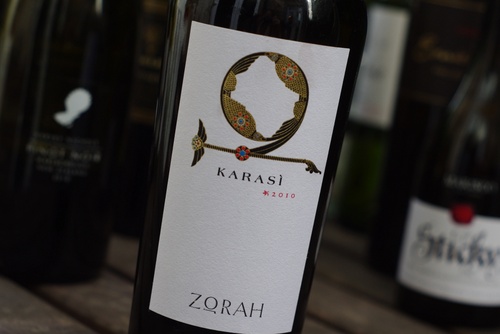 The representative of Tierras de Armenia stated in the court that they had submitted the application for the registration of the trademark earlier, so they were the legal owners of the KARAS trademark, insisting that “Z KARASi ZORAH” is extremely similar to their trademark. In addition, in the “Z KARASi ZORAH” the word “KARASi” occupies a central and dominant position, and it resembles their “KARAS” in all senses.

Tierras de Armenia claims that “KARASi”, the main visual element, can be easily confused with their “KARAS”.

The IPA replied that the only written word in the plaintiff's trademark is “KARAS”, while the readable elements of the disputed trademark are “Z, KARASi, ZORAH, 2010”.

The IPA argued that the main visual item in the disputed trademark is the letter “Z”, since it occupies one third of the label, and the word “ZORAH”, which is stressed by the size. As to the plaintiff's claim that the main visual element is the word “KARASi”, the IPA found the claim groundless, since “KARASi” is written in a smaller size and is less noticeable than the “Z” and “ZORAH”.  The IPA added that the word “KARASi” is only there to indicate that the wine was produced in a karas (amphora). The agency noted that consumers usually thoroughly study beverage labels before buying them. 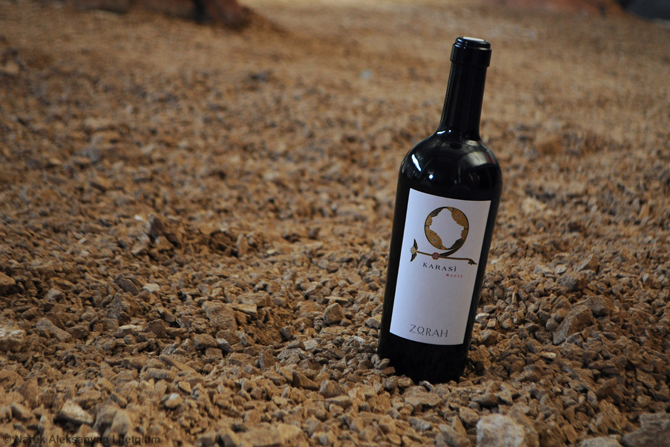 Before going to court, Tierras de Armenia ordered a marketing study to bolster its claim. The study placed presented the names of the two wines (“KARAS” and “Z KARASi ZORAH”) before consumers for a side-by-side comparison. Allegedly, most respondents said that both wines were "produced by the same producer" or "they were different classes of the same wine". In response, the IPA noted that it was guided by legislation, not such studies.

On September 13 of this year, Judge Hrach Ayvazyan found in favor of Eduardo Eurnekian, recognizing the “Z KARASi ZORAH” trademark invalid. In October, Zorik Gharibyan's company appealed the verdict, and the case is now being heard by the Court of Appeals.

After winning the above case in the lower court, Tierras de Armenia proceeded to the next step. On October 18, it again sued the IPA, as well as Voskevaz Wine Factory LLC. The claim is the same- to recognize the disputed trademark registration invalid.

The importance of the “karas” (amphora) tradition

Zorik Gharibyan says he decided that he would produce wine exclusively stored in amphorae. He recalls going to villages and collecting old clay vessels before starting the production. 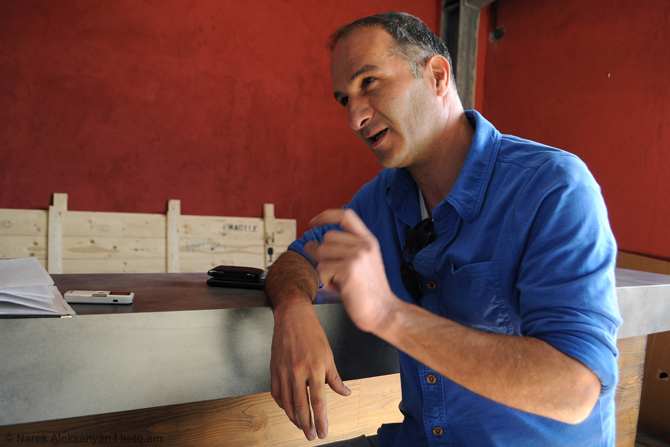 "My karases are the basis of my winemaking factory, and my visitors know that. Obviously, I was the first in Armenia to start experimenting with karases; they were my pride. We sell Zorah Karasi in every country, and we try to revive the karas tradition in Armenia,” says the winemaker, adding that Fine Wine magazine recently published an eight-page article about his clay vessels.

In the village of Rind in Armenia, where Gharibyan operates, there’s a class about making the clay vessels. A craftsman goes from Sisian to Rind (77 km) to teach the children. With the help of the master, the schoolchildren have started preparing their first amphorae.

“A matter of principle”, says a defiant Gharibyan

Zorik Gharibyan says he didn’t want to go public with the dispute.

“Up till now, I have struggled to find a common language with them, not to make it public. But, as we saw, the lower court decided against us, concluding that the first thing a person sees when looking at the Zorah Karasi label is KARASi,” says the winemaker.

Gharibyan says this is his first legal dispute during his thirty years of making wine.

"The funniest thing is that another diaspora Armenian took me to court. I was very disappointed. From the very first day, I was told that I should be careful in Armenia, careful with Armenians, the Armenian government. Everybody in diaspora says so. I must say that so far neither local Armenians nor the Armenian government have created any obstacles for me," says Zorik Gharibyan.

The winemaker says his reputation is at stake.

"I would like this topic to be concluded in Armenia, but I have no problem going abroad. I feel self-assured abroad. I have lawyers in London, Milan and Dublin. They are ready to petition the European Court of Human Rights," he says, adding that his lawyers are convinced he will win in the foreign courts.

Gharibyan says if Tierras de Armenia wins, the word "karas" cannot be on any other label apart from theirs. Meanwhile, he believes, using amphorae is becoming a global trend. Armenia is also experiencing a rebirth of amphora usage in winemaking.

"There’s a new wave in Armenia. There’s already 3-4 winemakers who have started experimenting with amphorae. This wave will gradually increase. Because of the monopoly of the name Karas, our future generations will not be able to use it. When we go abroad and are asked where we store our wine, what word should we use instead? If this word is monopolized, it means no one else can use it,” says Zorik Gharibyan. 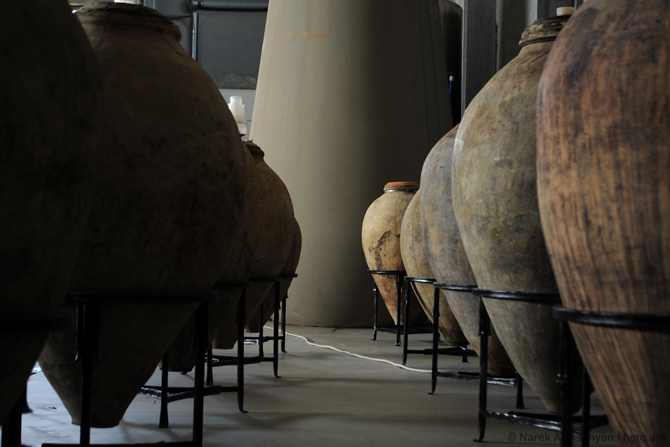 The winemaker is surprised to see that after years of registering the wine’s trademark, Eurnekian's company went to court. He says the crux of the matter is that a big company wants to appropriate a part of Armenian culture.

"One of our winemakers named his wine Karasi Collection, but I never thought of suing him. It’s not my property - it's our culture," says Zorik Gharibyan. He cites the example of Georgia, which received $ 1 million from the World Bank for a karas-making school.

"The Georgians are so clever that they use this as a marketing tool. Tomorrow I will go to France to promote my wine. I’m now thinking, if I do not use that word, what else should I say, the Georgian word? I'm ready to finish this fight. It's a matter of principle for me,” says Gharibyan.

Photos by Narek Aleksanyan and from the Internet