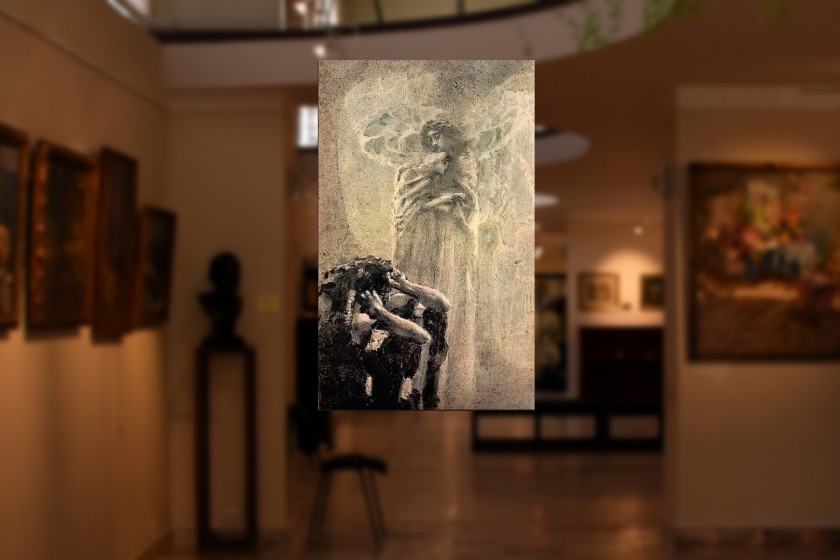 On March 20, after an absence of more than 22 years, the illustration by Russian painter Mikhail Vrubel, entitled "Demon and Angel with Tamara's Soul" will once again be on display at the Museum of Russian Art in Yerevan.

It was stolen from the museum in 1995, and nothing was known about its destiny until 2017, when during a meeting with Armenian President Serzh Sargsyan in Moscow, Russian President Putin announced his intention to return the recovered painting to Armenia.

However, the staffs of the Russian and Armenian presidents and law enforcement agencies either do not know, or do not want to disclose, details about the circumstances of the painting’s disappearance and detection.

How Vrubel's painting appeared in the museum

"Demon and Angel with Tamara's Soul" is one of the illustrations commissioned to young Vrubel for Mikhail Lermontov's Demon poem, created in 1891, when a full collection of Lermontov's writings was printed to mark the 50th anniversary of his death. 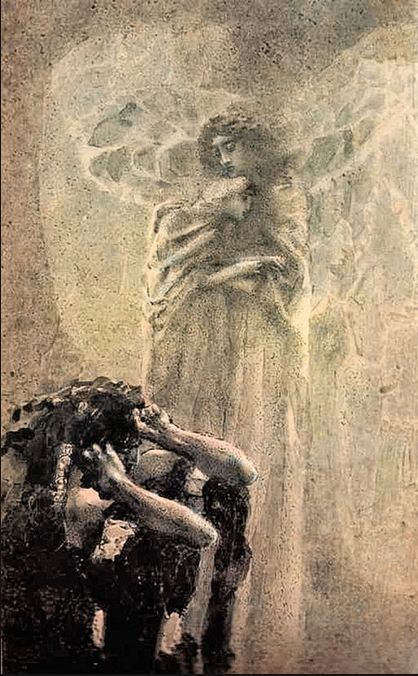 Art historians say that it was the illustrations made for Demon that brought recognition to Vrubel. These works later appeared at the Tretyakov Gallery in Russia and other museums or collections.

The illustration stolen from the Yerevan Museum appeared on the last poem page. After the publication of the Lermontov collection, it was acquired by Russian entrepreneur and patron of arts Savva Mamontov.

Russian prima ballerina Yekaterina Geltzer was the next owner. Geltzer's collection of several hundred paintings never was organized as a museum. Some paintings from her collection, however, including "Demon and Angel with Tamara's Soul", appeared later on in the private collection of Professor Aram Abrahamyan. Born in Tbilisi in 1898, he studied medicine in Moscow and lived most of his life there, working as a urologist.

Abrahamyan’s apartment in Moscow held a large collection of artwork. At first, it was done non-systematically, but then he started collecting works of the late 19th and early 20th centuries, known as “Silver age" of Russian Art. Chief custodian of the Russian Art museum Vera Kalchurina says that forms of art were closely linked in that period, so the paintings exhibited in the museum give a general idea about Russian art.

Kalchurina says that though Abrahamyan was not a specialist in arts, he showed an artistic approach. 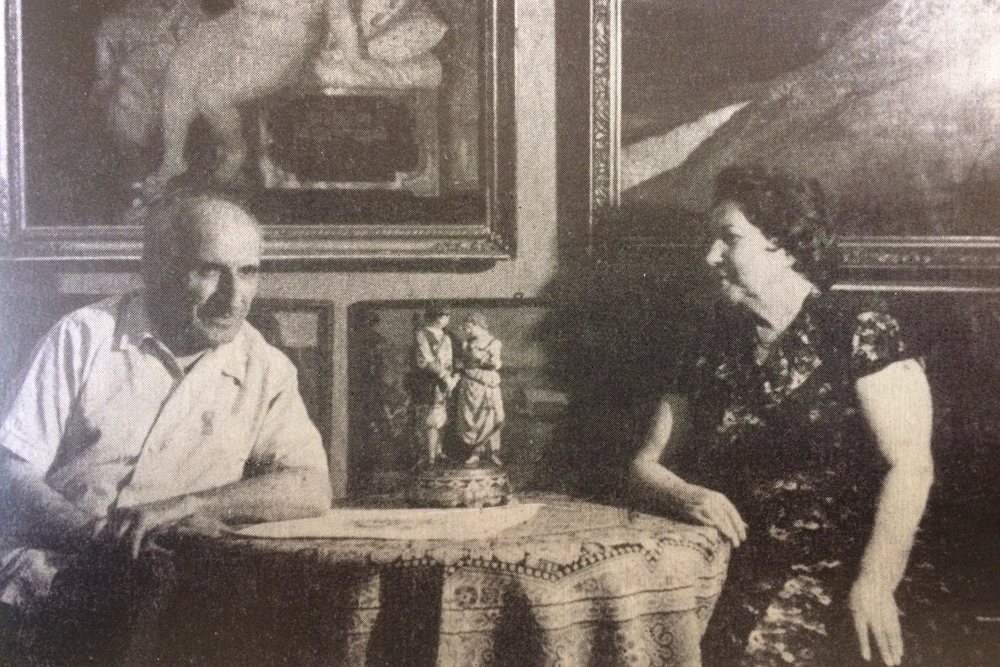 Aram Abrahamyan moved some part of his collection - more than 200 paintings, graphic works, sculptures and applied art samples - to Yerevan. 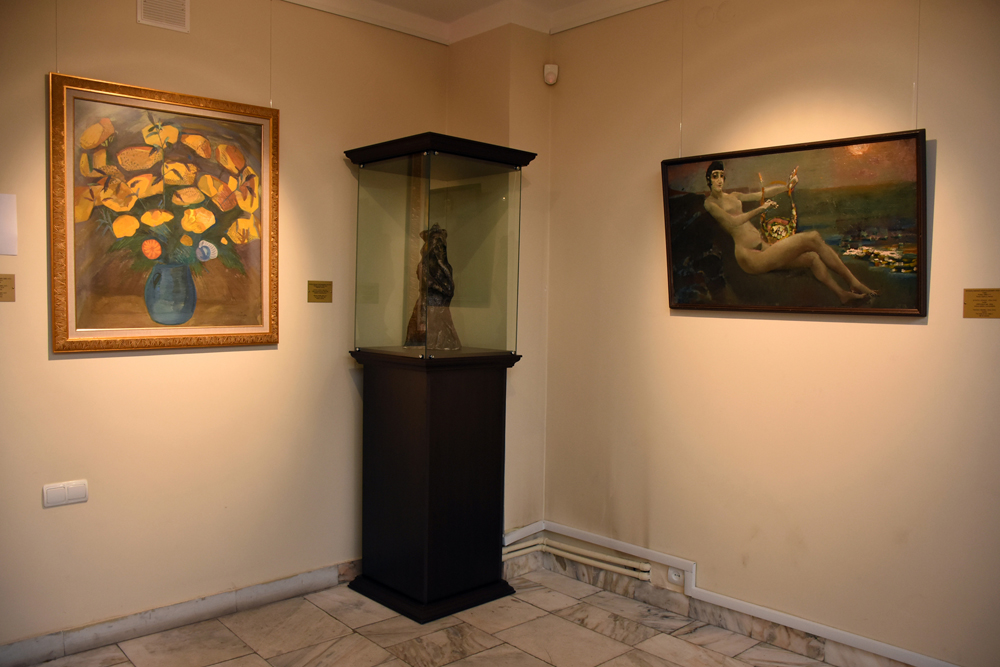 (From right): Mikhail Vrubel’s canvas "Safo", "The Princess of the Sea" sculpture and Martiros Saryan's "Yellow Flowers" at the Russian Art Museum.

The museum was compared to Moscow's famous Tretyakov Gallery and called Small Tretyakov. Describing the museum's collection, Vera Kalchurina says: "This is the best period of Russian culture and art, and many of its delicacies can be found here."

One night in June 1995, when there was no electricity in the building and no alarm system in the museum, and the guard was away from his place of service, some people came to steal one of those "delicacies".

Museum controller Tsovinar Aghayan, who lived in the same building, was the first one to find out about the theft. Learning from a neighbor about the broken glass in the museum, she went there and noticed the painting by Vrubel was missing. It was the only stolen piece of art.

The thieves used a metal manhole cover to break the museum’s double layer glass showcase. The newspapers of the time quoted the testimony of nearby residents about seeing two thieves.

Two months after the theft, the case was suspended "on the grounds of unknown identity of the perpetrators." Armenia’s Investigative Committee noted that the value of the painting was AMD 8,145,200. 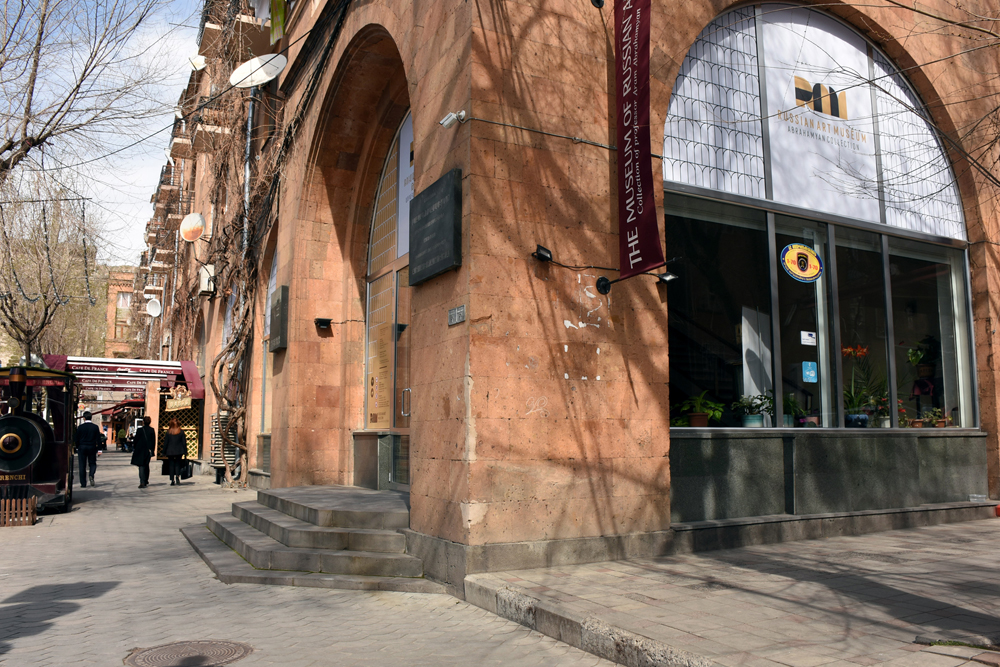 The museum staff does not know if the guard was involved in the incident. Kalchurina recalls the nights after the theft, when the museum employees, together with Police officers, took turns guarding the museum at nights.

Museum staff learnt about the recovery of the stolen Vrubel picture from the television. It was first announced a year ago, in March 2017, during a meeting of the Presidents of Russia and Armenia. No details were reported. On November 16, at the Vrubel Hall of Tretyakov Gallery, during the official opening of Armenian Culture Days in Russia, Vladimir Putin said that the illustration had been found in 2016 and Tretyakov Gallery specialists spent seven months to restore it. 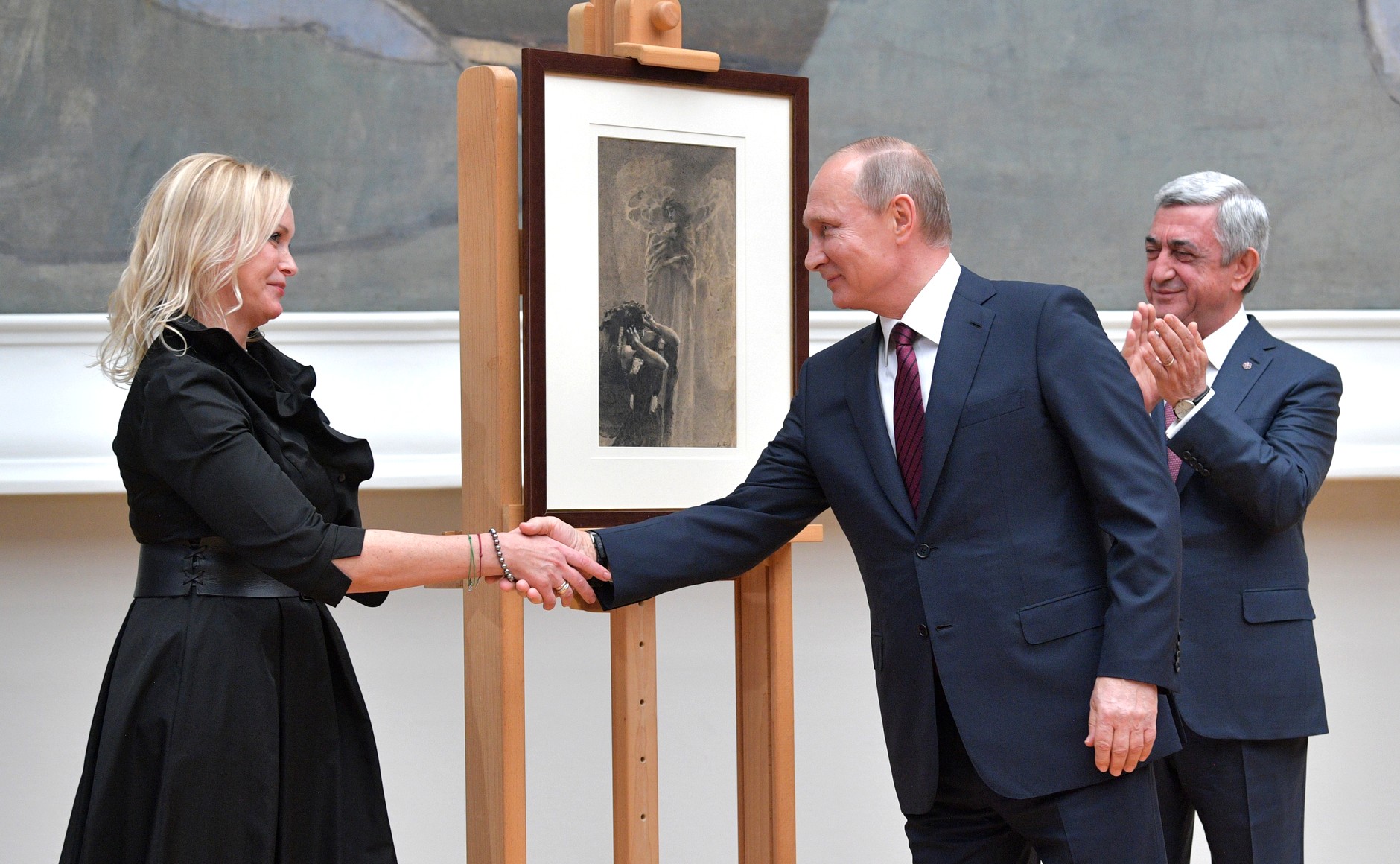 This is almost all the information available about the circumstances of the painting’s recovery.

The Kremlin's press service told Hetq that the painting was found torn into pieces, "as a result of complex measures taken by the law enforcement agencies" in 2014, not in 2016.

"The Russian side did not disclose any details of the discovery of the painting by the law enforcement agencies, so the RA President's staff will also refrain from providing details," the Armenian Presidential Office says.

The Investigative Committee only says no person has been arrested or charged with the theft at present.

The museum staff celebrates the return of the painting, but still has questions

The museum staff has no information about the incident details, either.

Director Marine Mkrtchyan only knows that the painting was found by special services "when inspecting someone's house" and handed over to the Tretyakov Gallery to check.

Mkrtchyan refuses to speak about the value of Vrubel's work. "It's priceless for us," she says.

Vera Kalchurina thinks this painting is the pride of the museum, noting that there are only a few museums that have Vrubel's works. She assumes the thieves knew about it, too. However, it is difficult to claim that they really knew the artistic value of the painting.

"Why would they tear it into pieces if they valued it?" she says. It’s also questionable if they had some collector who issued an order to obtain the painting.

Employees of the Russian Museum of Art compare the restoration of a torn painting to a complicated surgery or a medical resuscitation.

"If you do not know that it’s been restored, you won’t even notice the sewing. They did an excellent job," says Lilit Sargsyan, describing the work of Tretyakov Gallery restorer Inna Solovova.

During the exhibition, the painting restoration process will be presented, too.

The exhibition, entitled "Return of the Stolen Vrubel", will be open until November 20. It will then be moved to a permanent display.

The painting will be shipped to Russia in 2020, to be shown at Vrubel's personal exhibition at the Tretyakov Gallery.

Photos of the museum: Narek Aleksanyan