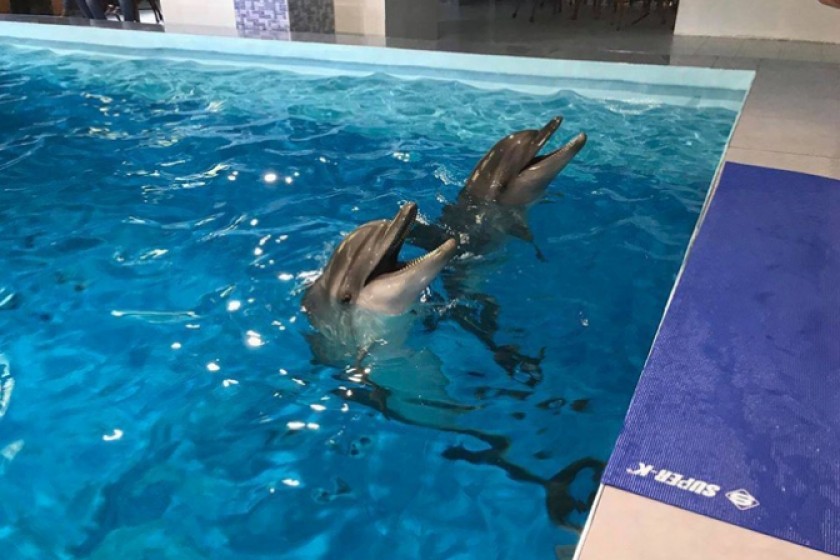 Dilijan Dolphins to be Sent to Iran

Two bottlenose dolphins, now being kept in a pool adjacent to the Best Western Paradise Hotel in Armenia’s northern resort town of Dilijan, will be sent to Iran according to Ministry of Nature Protection Chief of Staff Hovhannes Hovhannisyan.

News that the dolphins were being kept at the pool, ostensibly to provide medical therapy, created a furor in Armenia and abroad.

Animal lovers and others suspecting the hotel was merely exploiting the animals to attract business launched a petition drive to have the animals removed.

Best Western Paradise claimed that it is not affiliated with Dolphin Therapy Dilijan (the outfit operating the business), and that it stopped collaborating with the company on November 1.

Word of the Dilijan dolphins plight even made it to the pages of the British news outlet DailyMail.com.

Marine Connection, a registered charity based in the UK, working internationally on the protection, conservation and welfare of all cetaceans which highlighted the plight of the dolphins, announced on February 21 that the dolphinarium had been ordered to cease operations and that the animals would be sent back to Russia from whence they came.

In response to a Hetq inquiry regarding the news, the ministry merely stated that it had granted the company a six-month re-export license to ship the two dolphins to Iran.