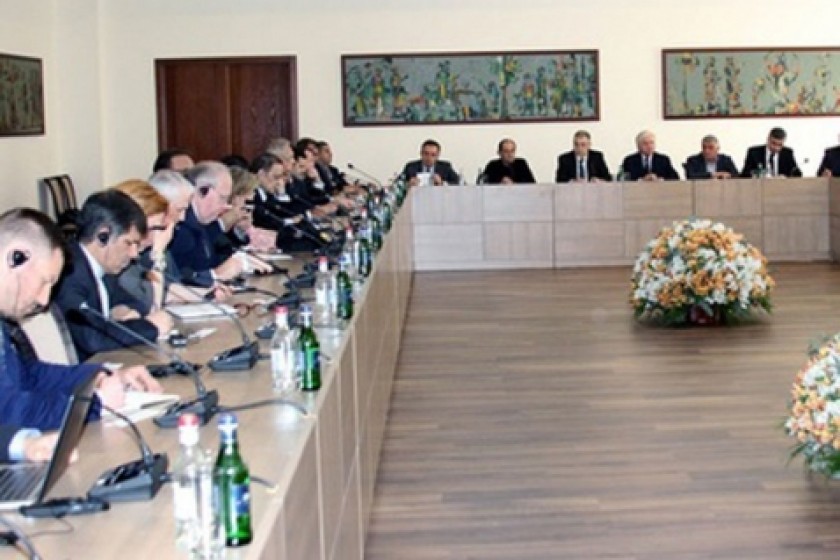 The following is an official Armenian government press release.

On April 22, Minister of Foreign Affairs Edward Nalbandian and Minister of Justice Davit Harutyunyan met with the heads of diplomatic missions accredited to Armenia.

Minister Nalbandian drew the attention of the attendees to the developments that took place after the meeting with the ambassadors the previous day. Foreign Minister touched upon the announcements made by the Ministry of Justice of the Republic of Armenia and law enforcement bodies, which pointed to the obvious violations of the Law of the Republic of Armenia on Freedom of Assembly and urged to cease the calls and actions aimed at violating public order.

Foreign Minister noted that the Armenian leadership and religious leaders voiced numerous calls for a dialogue. The President of the Republic even went to the place of the rally to meet with the organizer of the demonstration and to start the dialogue. Today, on April 22, the expectation that the meeting between Prime Minister Serzh Sargsyan and Nikol Pashinyan would cease the tension was not fulfilled, as the organizer of the demonstrations used the meeting with the Prime Minister to present the ultimatum to the Armenian authorities, in fact rejecting the proposal of dialogue.

Touching upon the statement made today by the European Union, Minister Nalbandian said that the Armenian side shares the provisions expressed there and not only respects the right to freedom of assembly but in practice ensures its adequate application in accordance with the legislation and international commitments of Armenia. Minister emphasized that the participants of the demonstration should respect the relevant legislation of Armenia while exercising their rights.

Minister of Justice Davit Harutyunyan presented clarifications on the Law on Freedom of Assembly and the international practice of ensuring freedom of assembly.

Minister Harutyunyan, while referring to the detention of the deputies of the National Assembly, noted, that ignoring the appeals by the Police, the organizers of the demonstration continued their calls on disproportionate limitation of the constitutional rights of other people and public interests, and a decision was made to halt the illegal demonstrations. Organizers of the demonstraion Nikol Pashinyan, Ararat Mirzoyan, Sasun Mikayelyan were forcibly removed from the place of the gathering and, in order to prevent the commission of the crime, upon immediate suspicion of intention to deliberately organize and hold demonstration in violation of the procedure prescribed by the law, and in full compliance with the Article 96 para 2 of the Constitution of the Republic of Armenia were arrested.

Heads of several diplomatic missions highlighted the importance of steps aimed at resolving the current situation through political means and within the limits of the law.