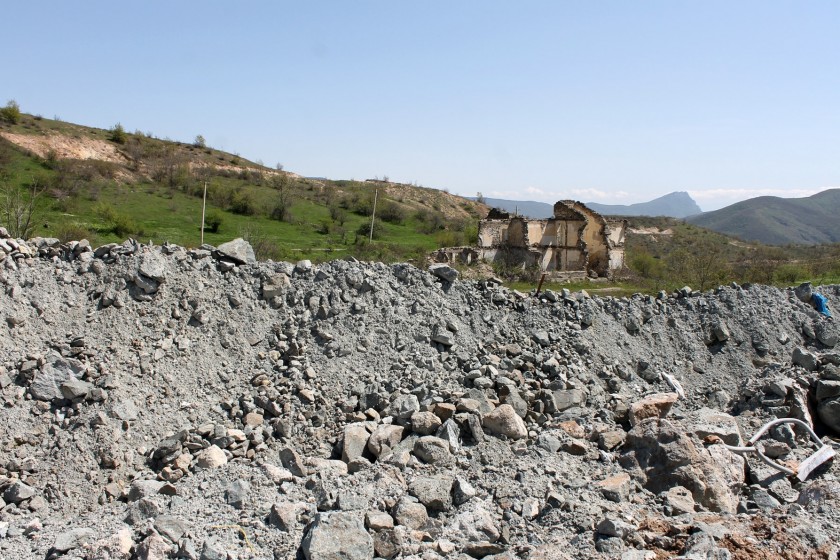 Mining’s Ghostly Spector: People Have Left a Kapan Neighborhood, to be Replaced with Trash and Tailings

One of the veins of the Kapan gold mine passes under the Shahumyan district in the town, the provincial capital of Syunik.

Deno Gold Mining, a subsidiary of Dundee Precious Metals Inc, (a Canadian-based international mining company) arrived on the scene and decided to launch an open-pit mine. It began by purchasing the land from residents. Exploratory work was conducted between 2008 and 2013. The company (later to become Dundee Precious Metals Kapan CJSC) decided to forge ahead and start production as an undergroundmine. 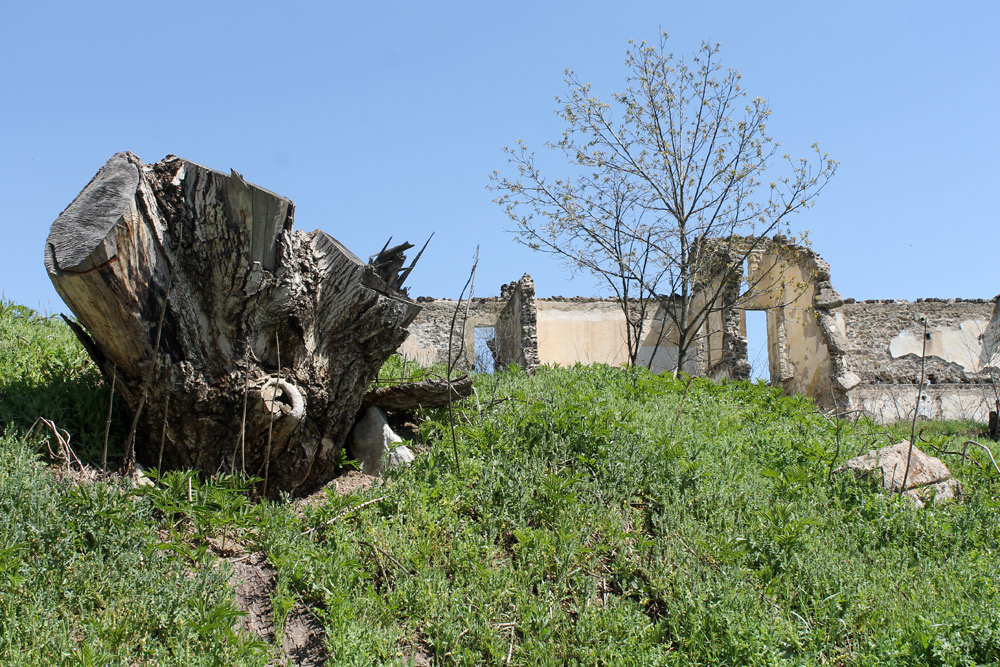 No one lives in the Shahumyan district today.

Polymetal International purchased the Kapan mine in 2016. It was the first operating asset in Armenia for the precious metals mining group that also operates in Russia and Kazakhstan. Polymetal’s subsidiary, Kapan Metallurgical Kombinat CJSC, now runs the mine.

Deno Gold had spent millions of dollars for exploratory work and to buy the land from Shahumyan residents. Hrach Jabrayan, Dundee Precious Metals Kapan CJSC managing director at the time, told Hetq that the amount spent ranged between US$40-60 million. 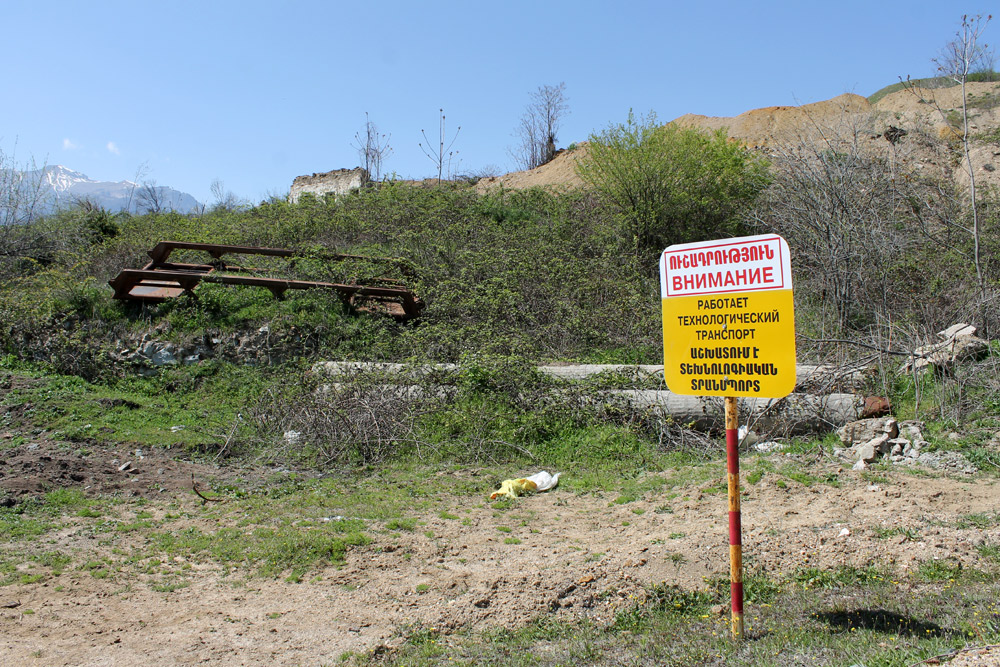 In March 2014, Hetq sat down with Jabrayan to discuss the Kapan operation and the fact that the open pit mine forced residents to leave the area after being paid for their land.

Jabrayan said it was a “good thing”.

What else could he say? He had to justify the company’s practices. Residents, on the other hand, remember the gardens and fruit trees that once graced the area. One of the residents we spoke to said that after the people left, gangs with chainsaws arrived and cut those trees down.

In its wake, the company has left numerous open rock pits. 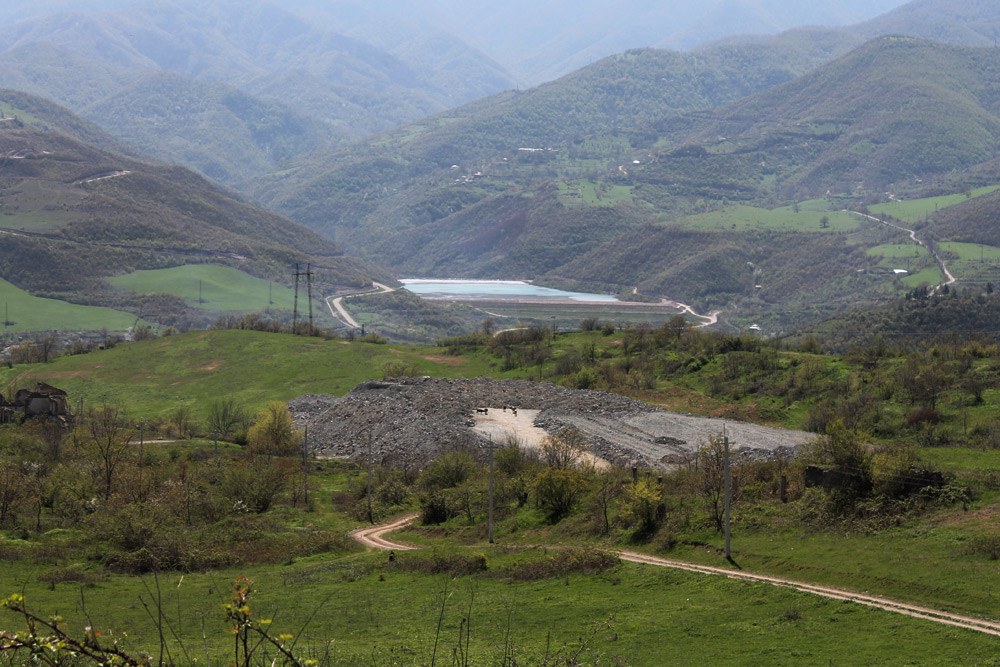 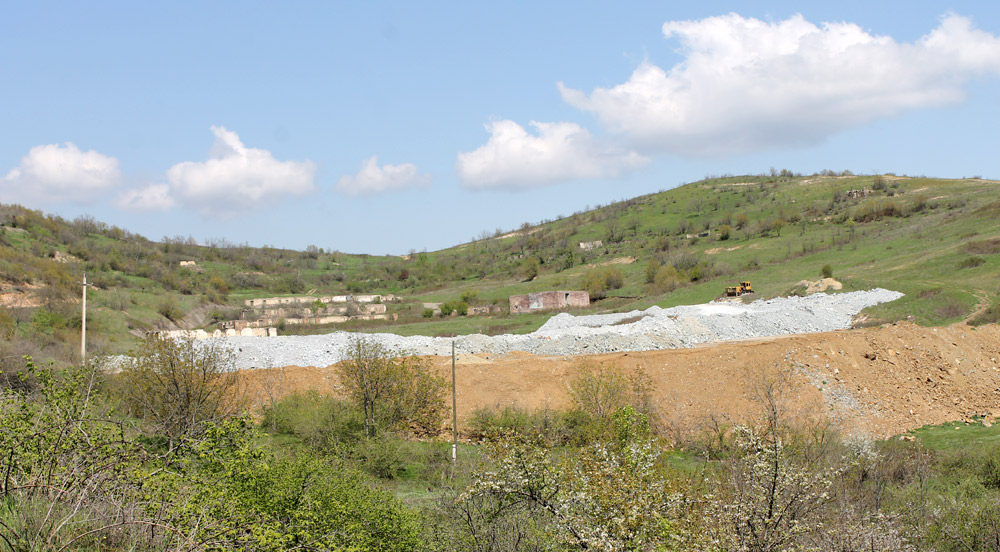 In addition to trucks, cows also visit the area. The site of domesticated animals at mining operations in Armenia is par for the course. 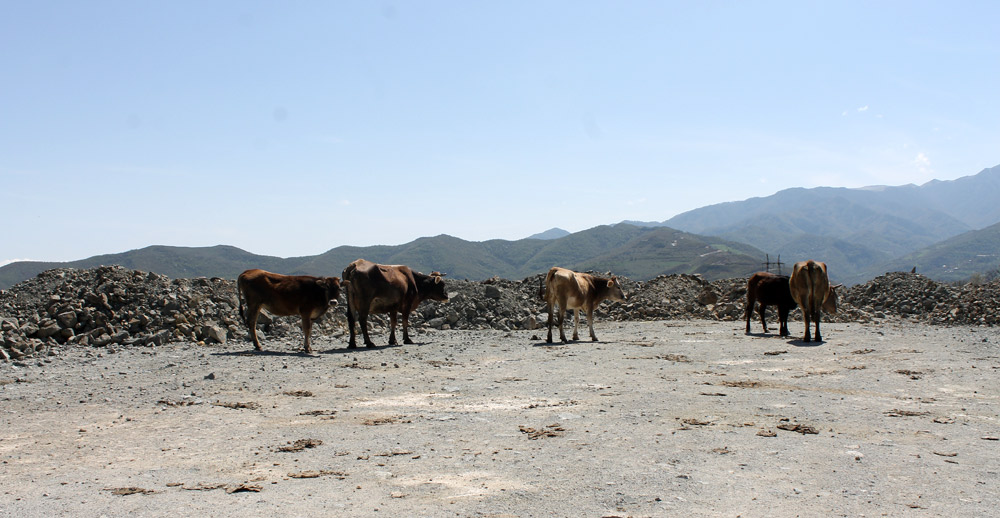 One spots the trash even before reaching Shahumyan. The mounds of trash hit your eye after making the right off the Yerevan-Kapan highway and onto the dusty curving road ahead. Garbage is strewn all over the place – along the roadside, in the big and small culverts, and in the Shahumyan district. It’s a mish-mash of household and construction waste. 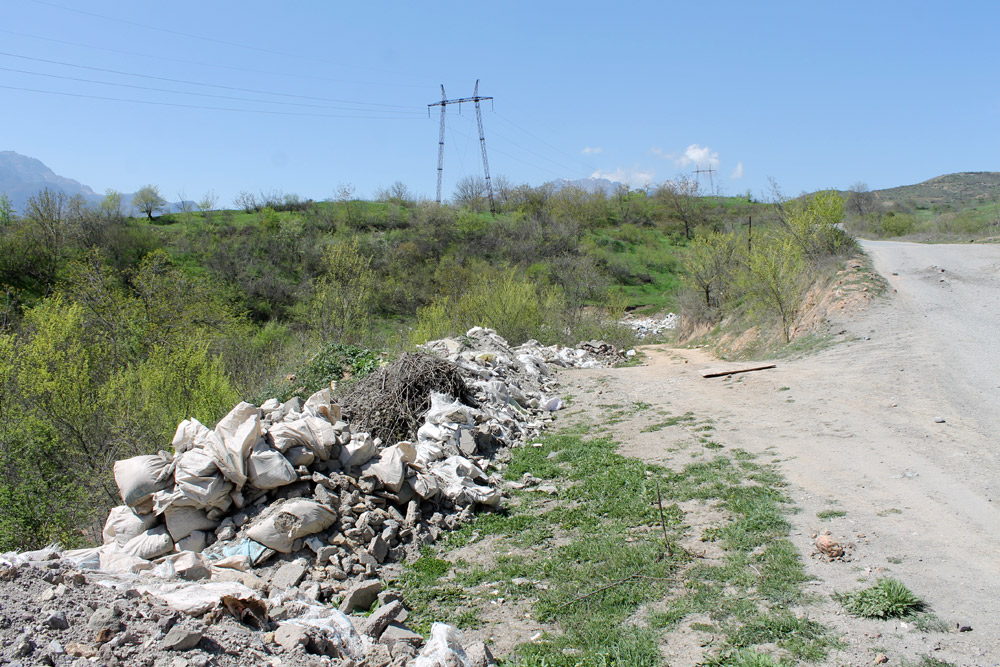 The rotting shells of abandoned cars also stick out. There are no trash bins or “No Dumping” to be seen. There are no visible markers separating the Kombinat’s land from public land.

Kapan Mayor Ashot Hayrapetyan, in response to a Hetq inquiry, said that the Shahumyan district is no longer inhabited and that’s why there are no trash bins or a trash dump site.

“The area belongs to the Kapan Metallurgical Kombinat CJSC. Thus, the company is responsible for the site,” Hayrapetyan said.

When asked about many mounds of trash along the road leading to Shahumyan, the mayor said there is no continuous garbage collection on the road. “No one lives there, as I’ve noted. Also, we’re often busy cleaning out trash mounds on other community lands,” Hayrapetyan said.

Looking at the amount of trash along the roadway, we can categorically state that the Kapan Municipality can’t tackle the problem on its own.

There are several manufacturing businesses at the start of the road leading to Shahumyan (near the Yerevan-Kapan highway) that might be suspected of causing part of the problem. 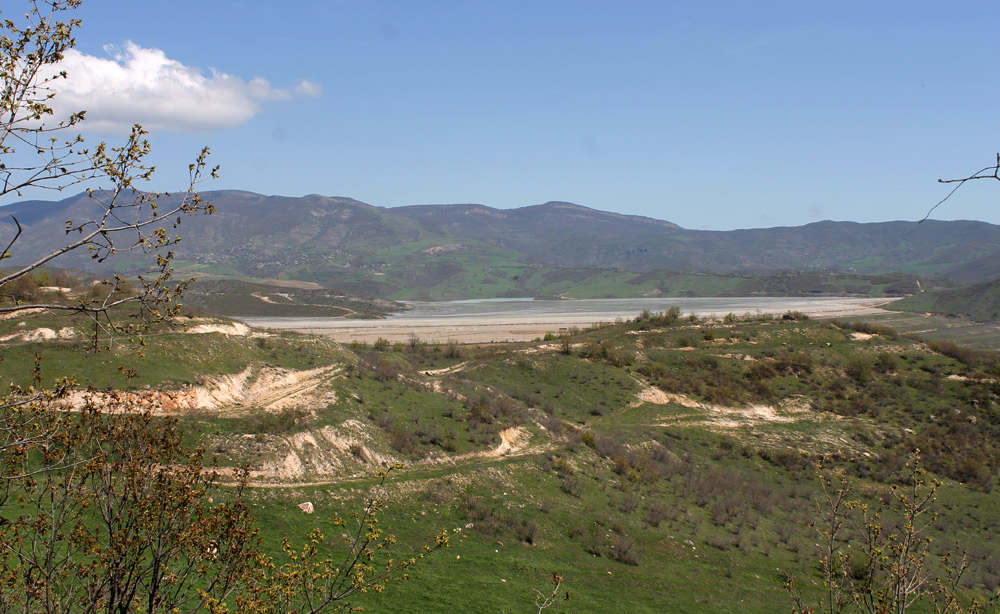 The Geghanoush tailings dam lies to the south of Shahumyan. To the north is the Artsvanik tailings dam

Hayrapetyan said it’s unlawful to dump trash in the Shahumyan district and along the roadway. When asked why the municipality isn’t taking steps to prevent the dumping, the mayor said that Kapan Metallurgical was responsible for cleaning the district since its their private property.

“The company has a permit to haul out industrial waste and it does. The municipality does the best it can to prevent unlawful littering, but we can’t monitor the entire town. It’s impossible for us to have the manpower to do so. But we’ve prosecuted many violators, forcing them to undo the damage. We’ve installed “No Dumping” signs in the worst effected areas,” the mayor said.

It goes without saying that local businesses and residents are responsible for dumping their refuse here and there. Nevertheless, the steps taken by the municipality to clean up the mess, especially at the Shahumyan district’s road, don’t appear to be making any dents.

When asked if the municipality had drafted a plan to clean up the site, and keep it clean, Mayor Hayrapetyan said town officials couldn’t devise a plan of action just for the one site.

“Let me note that the community recently drew up a list of several illegal trash dumps, including the site in question. Work is underway to clean them. Several have already been cleaned.”

The amount of trash we saw, however, clearly indicates that the work being done is far from sufficient.

We came upon the same scene while travelling along the road to the Kavart neighborhood. Plastic bottles and other household trash now litters the banks of the local Kavart River. 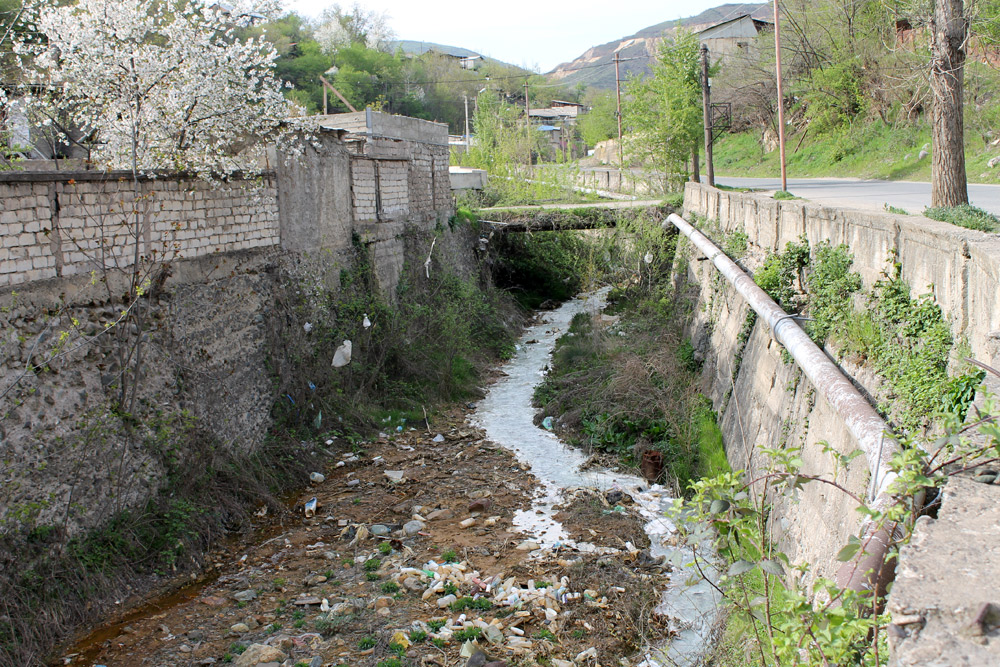 Along a stretch of road leading from the center of town to the Kavart neighborhood, its evident that equipment has been brought in to remove the roadside trash and dump it into valley below, thus “solving the problem”. There’s a car “cemetery” near the Kavart district. Kapan residents say people dump their damaged cars here. 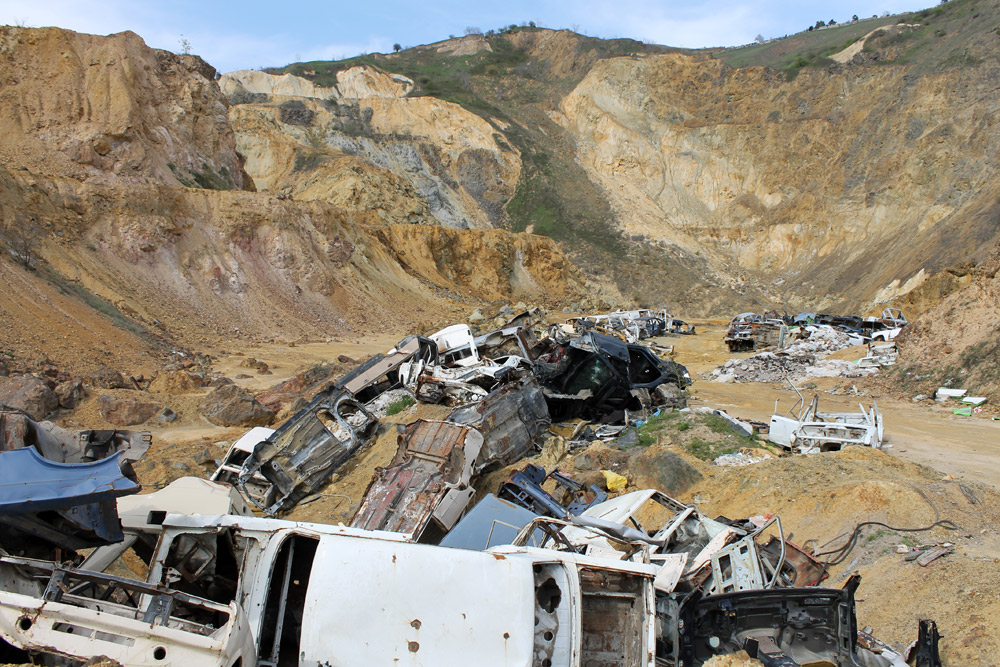 Mayor Hayrapetyan said there’s only one officially sanctioned garbage dump in Kapan, both before and after the government declared its ambitious Clean Armenia project.

The mayor said that nine illegal dump sites were cleaned because of the project. They were covered with dirt and restored to their previous appearance. “No Dumping” signs have also been posted. 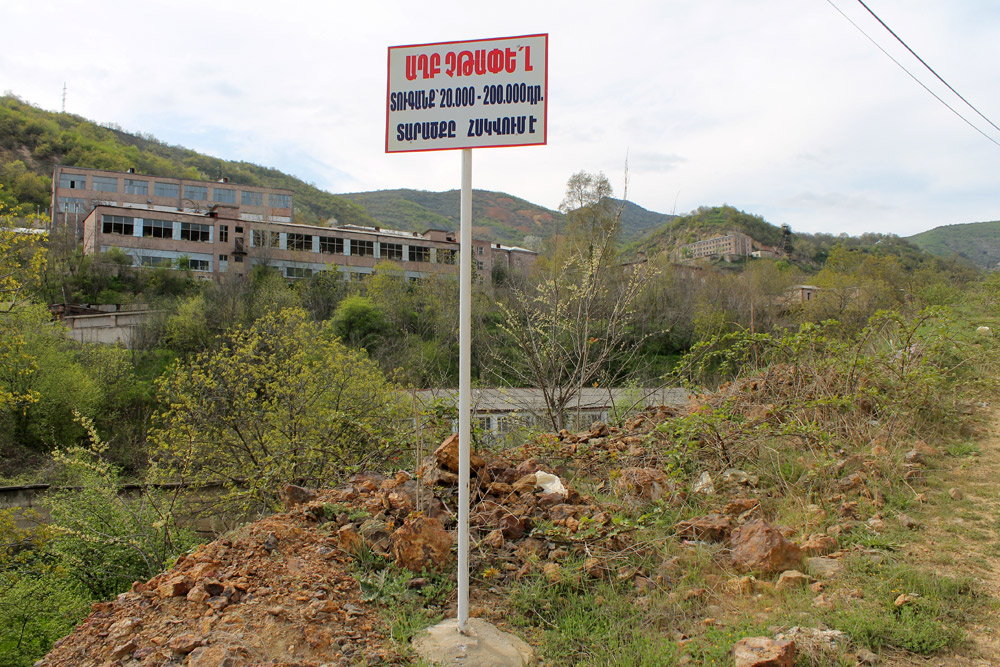 Despite a few warning signs, saying the area is being monitored, garbage is still being dumped by those who have no fear of getting caught and punished. Meanwhile, those old illegal dumps remain in certain corners of Kapan and are getting larger by the day.