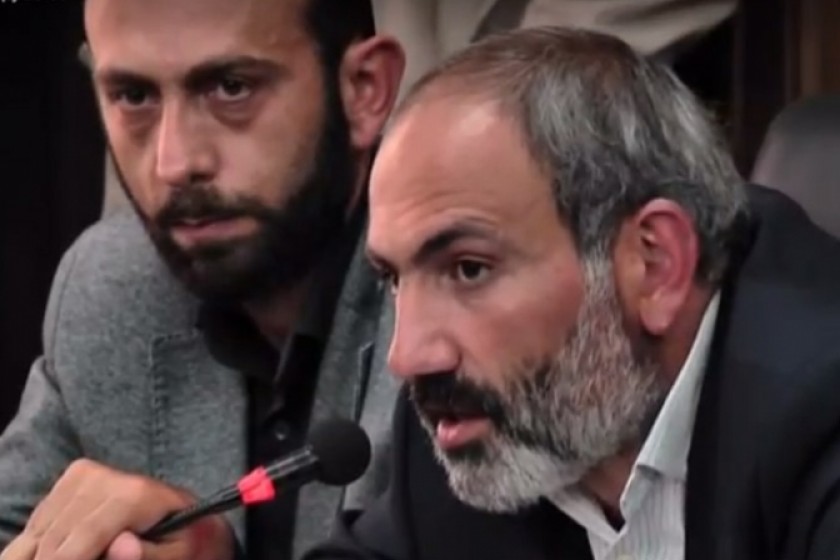 Pashinyan argues anti-government movement has helped, not hurt, the economy

This afternoon, Yelk Alliance MP Nikol Pashinyan, the only declared candidate for the post of Armenian prime minister, had an open-door meeting with members of the Republican Party of Armenia (RPA) faction in the National Assembly.

Here are some key issues discussed during the meeting.

Replying to RPA MP Karen Bekaryan’s question about the Karabakh issue settlement, particularly the methodology of getting the details of the negotiations, Pashinyan said:

"It is clear that the Karabakh conflict is one of the most important issues, and its discussion and settlement should be done within the framework of the OSCE Minsk Group. I think it shouldn’t take long to get the details, and the methodology should be an institutionalized one, since there are corresponding institutions in Armenia that should supply me with necessary information in case I am elected prime minister.

“In general, the methodology of work, I think, should still be institutional. Of course, individuals have their role, but that role must be balanced. I think that there are institutions in our country that have succeeded and can now serve as a counterbalance.

“To make peace, one needs a peaceful atmosphere. I think that it is a problematic issue for every representative of Armenia to negotiate with a country or representative of a country that occasionally threatens to take aggressive actions against one or other part of Armenia, even daring to declare its ambitions for Yerevan.

“OSCE co-chairs and the international community should understand that it’s not realistic to speak about the issue settlement in such conditions. It is not possible to have an atmosphere of peace. In general, Armenia's position in the negotiation process should be strengthened. Why? Because I believe that national awakening and national unity that we have today should strengthen the position of the Armenian side in the negotiation process, contribute to the increase of readiness of our armed forces and our spirit in general, which is not the least important in this process. "

“Armenia will continue its EEU membership”

Sharmazanov also claimed that Nikol Pashinyan's actions as a candidate for the post of prime minister are quite different from the political statements he’s made as Yelk Alliance parliamentary faction leader.

Nikol Pashinyan noted that it was never a secret that he had voted against Armenia’s joining the EEU. But, since Armenia is already a member of the EEU, politicians and state actors should take into consideration the realities of Armenia in order to serve the interests of Armenia. He’s against sharp turnarounds in the foreign policy, since they might be very dangerous for the country.

"I think that state officials and authorities should be guided by the national interests of the country," Pashinyan said.

There are many problems in the EEU as an organization, and Pashinyan said he is willing to discuss them with partners to find solutions.

MP Khosrov Harutyunyan asked a question about the candidacies of future ministers, vice prime ministers, and the government. Pashinyan said that the future government would be formed depending on the political scenario unfolding tomorrow.

MP Gagik Melikyan said, “The people should understand that every day of the movement throws our economy back for at least two months”. Saying that he speaks on behalf of people, Melikyan asked Pashinyan, “When will Nairit Plant renew operations?" [Here, Melikyan is referring to the anti-government movement of the past three weeks-ed.]

Pashinyan said that he did not have enough expertise at the moment to reply about Nairit Plant. As for economic losses caused by the movement, he replied that, on the contrary, this movement has accumulated a great potential for the essential and flexible development of the Armenian economy, including large investments from abroad.

MP Hermine Naghdalyan noted that Pashinyan's position in the sphere of external and internal policy does not differ much from that of the RPA. She also noted that the Azeribaijani press has expressed its satisfaction with the elimination of the democratic and political elite in Armenia, with which Azerbaijan was ready to cooperate. According to Naghdalyan, Pashinyan does not see any danger here.

Pashinyan says that the movement resulted in considerable increase in Armenians’ national spirit, which will have its military and political consequences. If Azerbaijan is happy with the current situation in Armenia, then they misinterpret the situation.