Regime change in Armenia has put an end to the operations of the Luys Cultural, Scientific and Education Foundation founded in 2009 by former Armenian President Serzh Sargsyan and former Armenian Prime Minister Tigran Sargsyan.

Hetq has studied the financial accounts of Luys for the past five years and has uncovered that in addition to providing financial assistance to students accepted at top world colleges, the foundation has also allocated money to some forty organizations, some linked to the former Armenian regime.

While Luys formulated such allocations as part of its charter mission, such payments were kept out of public view.

On the executive board in addition to the above two Sargsyans, were Armen Gevorgyan, former Presidential Chief of Staff, former Minister of Defense Vigen Sargsyan and People’s Artist Robert Amirkhanyan.

Support to Unknown Organizations and Programs

In the accounting statements of Luys, we found baffling and huge allocations made in a ledger line entitled – Support to similar organizations and social programs.

Luys failed to provide details about these allocations that amounted to AMD 3.4 billion over the past five years. (That’s equivalent to US$7.043 million at today’s exchange rate). AMD 1.6 billion was allocated in 2017 alone.

Hetq wrote to Luys Executive Director Vardan Markosyan, asking that he supply Hetq with a list of those organizations which, during 2009-2017, received money for such disbursements, the amount each received, and the nature of the allocation.

Markosyan’s reply was just as vague as the disbursement line itself.

He claimed that all the allocations were in line with the charter of the Luys Foundation and that the accounting documents, audited by KPMG, meet all the requirements of Armenian law.

Markosyan wrote that over the past ten years Luys had financially assisted some 570 university students and that most of the AMD 1.6 billion spent last year went to buy medical equipment for a Yerevan rehabilitation center for injured and disabled soldiers and as cash outlays to soldiers and civilians who suffered during the 2016 Artsakh “Four Day War”.

Some money was also spent to repair roofs in the Tavoush border village of Aygepar damaged due to Azerbaijani gunfire.

Smaller amounts of the AMD 1.6 billion, according to Markosyan, was spent on a number of cultural programs including the purchase of musical instruments for the Children’s Art Palace in Gyumri.

“I am certain that those donating to the Fund are satisfied with the content of the programs we’ve carried out and their effectiveness. The best proof of this is their continued support,” Margosyan wrote in this reply to Hetq.

Margosyan fails to explain why there won’t be any financial assistance to high school grads planning to attend university this year and if it has anything to do with the ouster of Serzh Sargsyan from power.

Hetq sent another query to Luys, asking to know what else it would be doing this year besides processing scholarships to the seventy university student recipients in the system.

More than half of the budget of Luys was spent on items other than financially assisting students at top colleges and universities throughout the world.

For example, the total Luys budget for 2016 was AMD 3.9 billion, of which 1.5 billion was spent on scholarships for 104 Armenian students.

In 2017, the Luys budget amounted to AMD 4.7 billion, of which 1.7 billion was allocated as scholarships for 116 Armenian students. The remainder was allocated to a variety of non-profit organizations or was spent on staff wages.

Luys Foundation: Playing the Role of a Government Agency

Over the past five years, five Armenian SNOCs (state non-commercial organizations) and one non-profit have received millions in hand-outs from Luys. It’s as if Luys acted as an intermediary between the government and organizations in the cultural and art sectors, doling out large amounts of the state budget. Of note is the fact that the Luys Foundation’s financial resources, in addition to individual donations, also came from the AMD 100 million allocated annually by the Armenian government’s staff.

It’s worth noting that in addition to Ohannes Tchekidjian’s Armenian National Academic Choir receiving financing, the Tchekidjian Charitable Foundation also received 10 million drams in 2014 and 2017, to pay for the choir’s expenses and to cover the costs of performing overseas.

During the past two years, the Luys Foundation allocated AMD 95 million (some $200,000) to the Tchamport (Traveler) paper founded by Arianne Caoili, wife of chess grandmaster Levon Aronian. (The photo shows Serzh Sargsyan serving as godfather at their wedding) 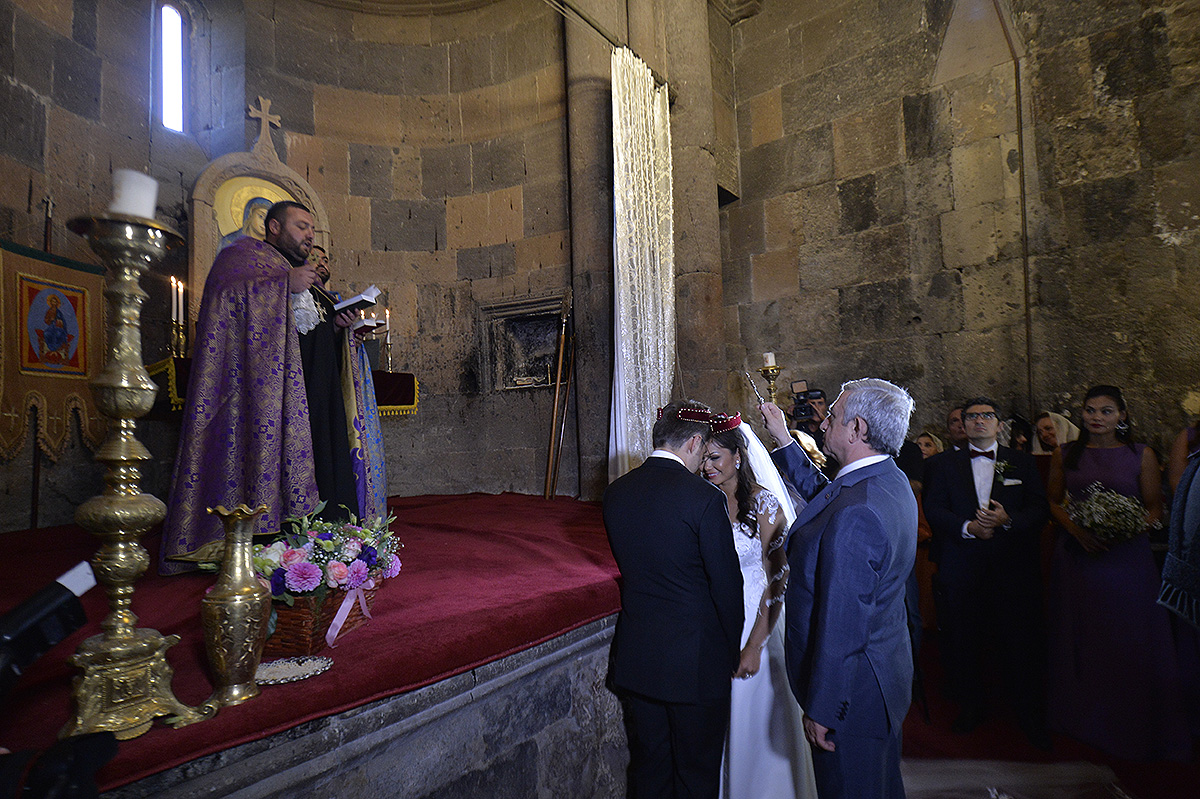 The freebie paper began publication in February 2016, and was distributed, via boxes, installed at all major public transportation venues – metro, bus stops, etc. The paper’s website claims it has a readership of 50,000.

Luys allocated the weekly 35 million drams during its first year of publication. In the 2016 Luys annual report the expenditure is classified as “assistance to the Tchamport non-profit foundation to help and give guidance to young reporters, to print news outlets taking their first steps, and to assist the independent press and spur the development of political society.”

From 2014-2015 Luys allocated money to the Chess Federation of Armenia.

Luys classified its AMD 10 million allocation to the Chess Federation as assistance to ongoing programs.

In 2013and 2017, Luys assisted the “Ayp” Educational Foundation. In 2013 it allocated AMD 114 million to carry out the Ayp Educational Juncture program. In 2017, it allocated 24 million drams to create the Foundation for Armenian Science and Technology (FAST).

Luys allocated AMD 40 million in 2016 to a non-profit organization called “In the Name of Gyumri and Gyumri Residents”. It was founded in 2015 and is run by former MP Martun Grigoryan, a member of the Prosperous Armenia party from 2009-2015.

Studying the details of those receiving financial assistance from Luys, it’s apparent that Serzh Sargsyan, or his wife Rita, sits on the boards of most of them.

For example, Luys allocated AMD 50 million to the “Aragil” Reproductive Medicine Support Foundation in 2015.  Rita Sargsyan is the honorary president of the Aragil’s board of trustees.

So where did Luys get all this money?