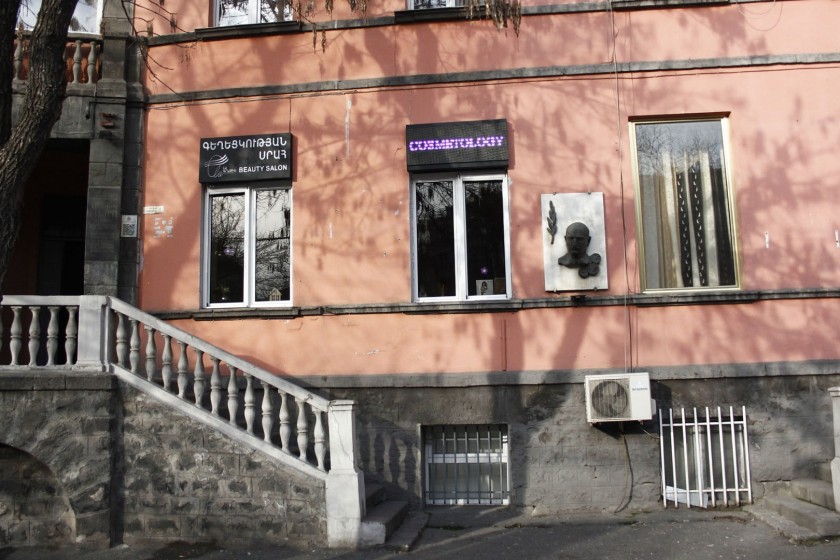 Yerevan’s Landmark Buildings: Bastardized in the Name of Business?

When we talk about preserving cultural and historical monuments in Yerevan, we immediately think about those historic homes and architectural sites that have been destroyed by neglect or the wrecking ball.

But what about those landmark residential buildings in Yerevan that we walk past every day? Many are now nearly unrecognizable, stripped of their former appearance, as a result of the architectural interventions  and commercial facelifts by developers and storeowners.

There are several such landmark buildings on Abovyan Street, a main downtown Yerevan artery. Over the years, their facades have been “bastardized” to such an extent that little remains of their former glory.

Take the building at 31 Abovyan Street. Designed by the architect Mark Grigoryan, it’s lost in a mishmash of boutiques. Each storeowner has installed a set of stairs, made modifications to the façade, and added advertising signs. 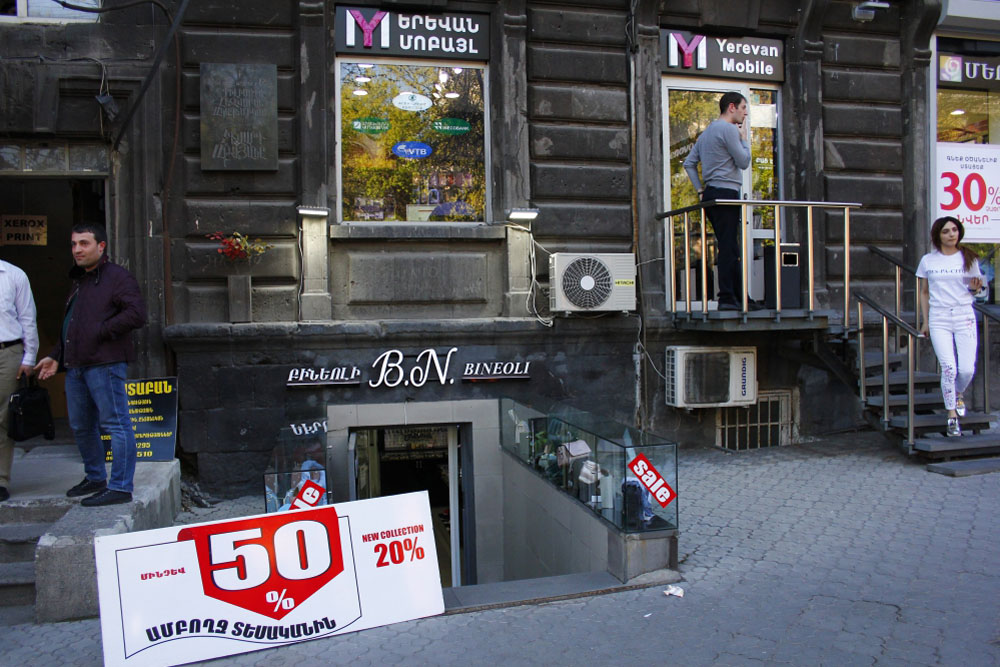 According to Article 38 of the Law on the Preservation and Usage of Historical and Cultural Landmarks and Historical Space, landmarks can be utilized for commercial and other purposes if such usage corresponds to the character of the landmark, if it doesn’t damage the landmark’s stability, and if it doesn’t mar or defile its historical, scientific or artistic value.

Erected 78 years ago,  the building at 32 Abovyan Street, is registered as a Yerevan landmark. Designed by the architect Samvel Safaryan, the building (The House of Professors), has also been “modified”.

Smaller businesses sprout from its side like mushrooms. There’s the Zizzi clothing store and a Toto betting parlor facing the sidewalk. 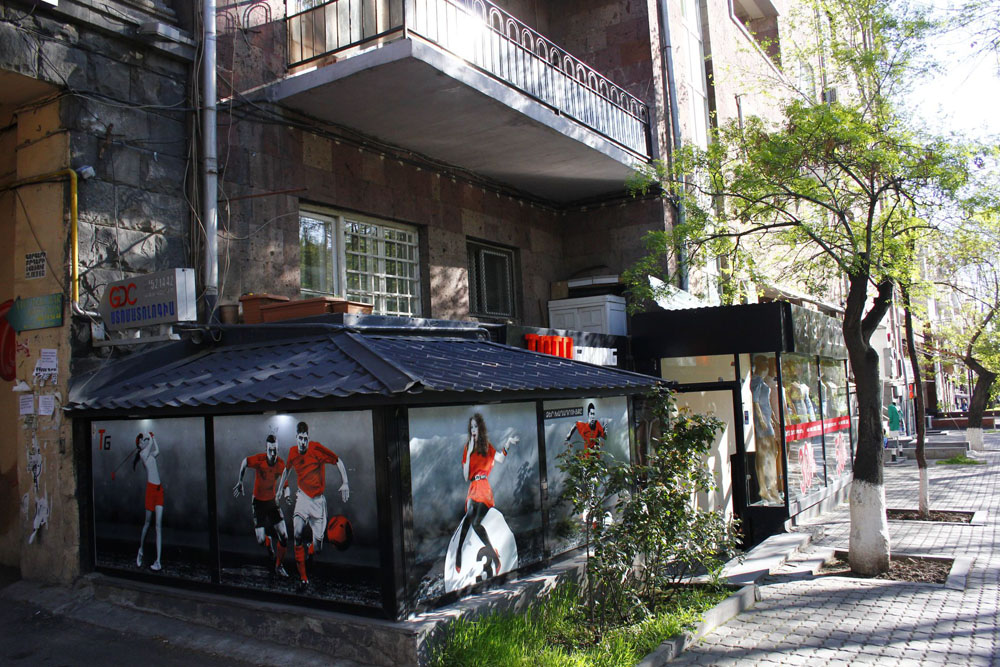 There’s another monstrosity on 21 Nalbandyan Street, the House Museum of Alexandre Spendiaryan, the famous composer and conductor.

A passerby might think that Spendiaryan, who wrote the Almast opera, had more to do with manicures and pedicures than classical music.

Right above Spendiaryan’s plaque, there are signs advertising beauty salon services such as haircuts, cosmetology, etc.

Museum staffers told Hetq that they tried for years to get the advertising removed, but to no effect. 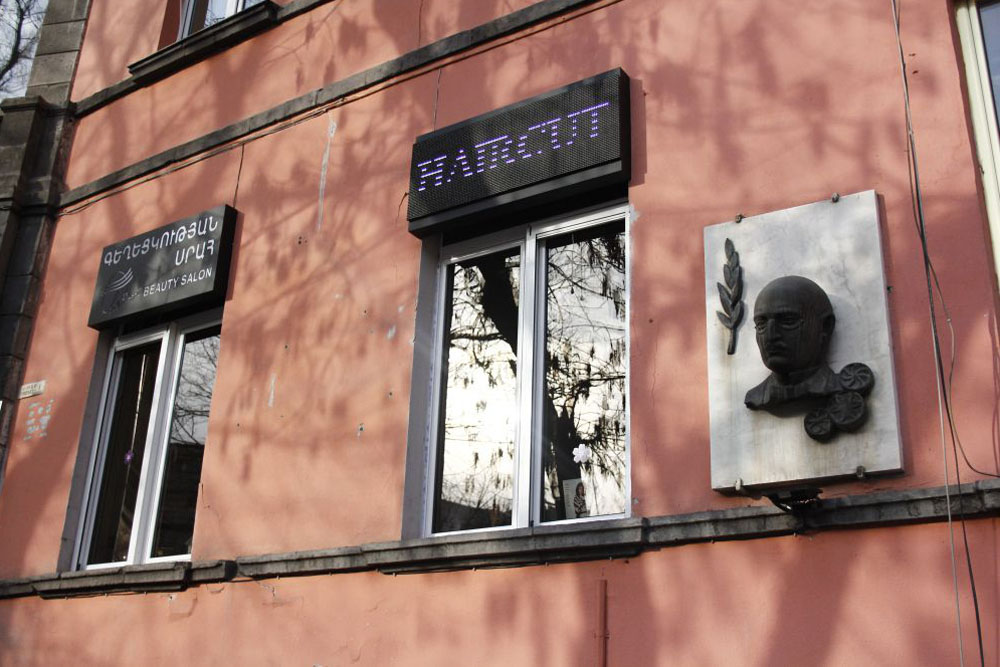 Karo Ayvazyan, who heads the Ministry of Culture’s Landmarks Preservation Agency for Yerevan, told Hetq that the ministry has written to the Yerevan Municipality, suggesting that it review the permit issued for the advertising on the building’s façade.

“We aren’t opposed to all advertising, but the standards must be met. Advertising shouldn’t detract from the building’s architectural  appearance. The municipality says it will review the matter but, as you see, the problem persists. We never agreed to the installation of this advertising. But the storeowner isn’t to blame. He installed his conception of advertising,” says Ayvazyan.

Article 22 of the Landmarks Preservation law states that all land allocations  and the blueprints for engineering/transportation arteries for construction, agriculture and other work on sites containing landmarks must be approved by the agency in charge; i.e. the Ministry of Culture. 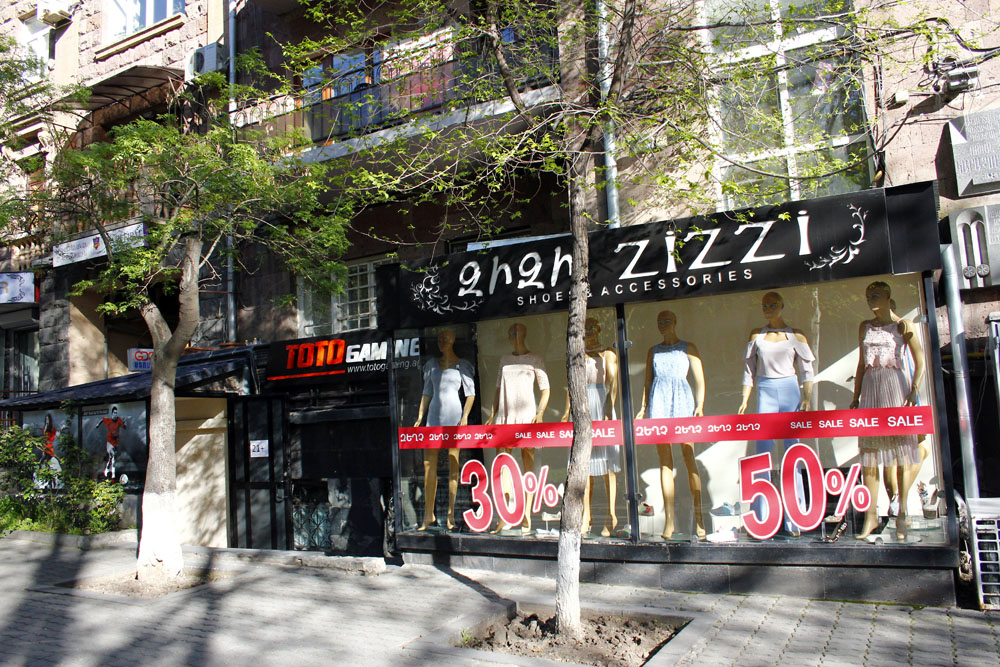 So, who is responsible for the current state of these landmark buildings? If these modifications and changes were made with the consent of the agency in charge, then the ministry is accountable. If not, the Yerevan Municipality is at fault. If a business owner has made changes willy-nilly, without anyone’s approval, then, that individual is responsible.

Needless to say, oversight is woefully lacking regarding the law on landmark preservation. There has been no unified government approach to the matter. Structures are built, razed and modified with little attention paid to aesthetic norms or the law.

Ayvazyan sounds an optimistic note that things will change given the recent change in government.

“We can’t replace that which is lost, but we can, in certain cases, make things right,” the official says, noting that contracts shouldn’t be extended to those who have leased landmarks.

Given their current appearance, it is also possible that the buildings we have highlighted here may lose their landmark status. This would be the height of irony.

Hetq plans to look at landmarks located in other parts of Yerevan in upcoming articles.

Eddy 2019-01-25 08:30:35
I like Yerevan a lot. Dsipte short commings the city has still a lot to offer to the visitors and so on BUT , BUT , BUT – NO PUBLIC TRANSPORT SYSTEM, TOO MUCH unfinished construction, too much cafes and smoking in parks (hookah/water pipe has nothing to do with our culutre too) … No public toilets, …. AND, AND , AND , AND the following one: UNFURTUNALTY , Almost all business signs in Yerevan/Armenian are written in (bigand ugly ) foreign letters. What a big shame for us Armenians!!!!. … What a shame ..this all shows NO respect for there own language and culture heritage! side all this, the risk of earthquake in Yerevan is big, how comes that still building of so amny high buildings with poor quality are permitted ?
Eddy 2019-01-25 08:30:35
PS: Development of Yerevan needs a new approach and concepts … If I had enough money, I would offer to bring back the remains of last Armenian King from Paris and build a (join) huge monument of Tigran the Great (royal dynasty) at the place of Lenin's monument at the Republic squaer and offer to relocate the government /PM office to a smal l city not far from Yerevan, e.g. Ashtarak or Artashat
aram 2018-07-23 21:10:51
We definitely need laws, stricter law and enforcement of the laws. I under no illusion about Pashynian trying to bring about law and order. Pashynian is a politician, he will eventually be exposed .for what he is. Politicians are servants of their own pockets.They don't become politicians for the love of the people. , i Why this former journalist become president be any different. .