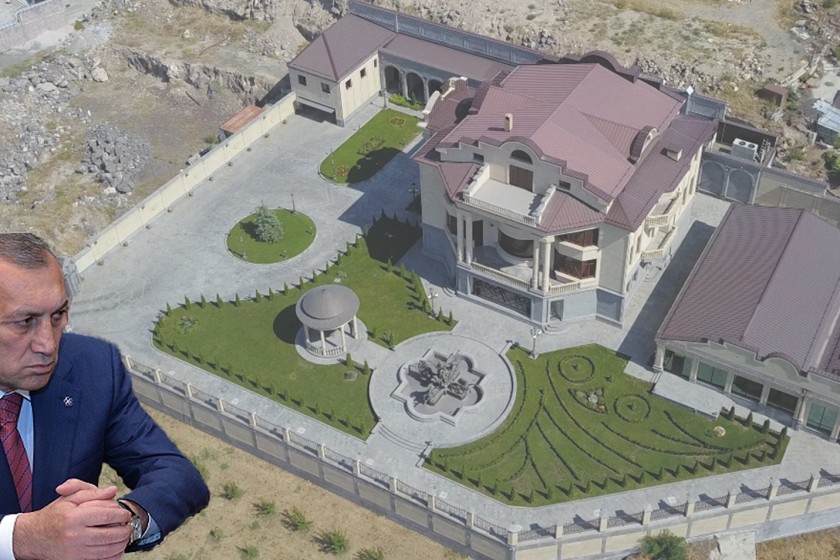 Former Syunik Provincial Governor Surik Khachatryan has been building a three-story house on  2,000 square meters of land owned by him in Yerevan for more than 10 years. However, he got a construction license only recently, on June 8, 2018.

In 2008, Surik Khachatryan purchased two separate land plots belonging to H.R.-A.A.A LLC, each with a surface area of ​​1,000 square meters. The plots are located in Kanaker-Zeytun administrative district of Yerevan, at Karapet Ulnetsi 32/11 and 32/12 addresses. The  sale contract mentioned the price of 39 million 600 thousand drams (around 82,500 USD), but it turned out that buyer Surik Khachatryan paid $ 500,000 for the land.

An existing house, absent from documents

According to information acquired from the State Committee of Real Property Cadastre, Surik Khachatryan registered his right of ownership of the land plots on July 18, 2008. About ten years later, as of August 22, 2018, there is no building registered on the land plots, while the satellite photos prove otherwise.

Using Google Earth, we were able to find out that construction on Khachatryan’s land plots started on October 2009. In 2011, the basements of the house were already built, thus signaling the start of active construction. Within two years, the three-story house and fences were built, and in 2014 - auxiliary buildings, one of which looks like a covered swimming pool. In 2016, the yard was renovated, and, in 2017, the landscape was greened, yard roads and the road leading to the house were paved.

Sending a written request, Hetq received extensive list of building permits in Yerevan from the Yerevan Municipality. Using this list, we see that on June 8, 2018, a permit was granted to Surik Khachatryan for the construction of a residential building at Karapet Ulnetsi 32/11 and 32/12.

In other words, a construction permit was given for a house which was already built.

In addition, on July 19, 2018, Aragats Ghevondyan, Surik Khachatryan’s proxy, received a decision from the Yerevan Municipality, according to which the two land plots were united at one address - 32/12 Karapet Ulnetsi Street.

Property tax not paid for the house

As of August 23, 2018, the official website of the Yerevan Municipality has a new page, which allows one to see how much property tax is paid for any address in Yerevan. However, it shows that no paid property tax for a private house for the above-mentioned addresses. The payment is made only for land - 14,646 drams (around 30 USD) per year for each address.

It turns out that Surik Khachatryan has been constructing a house illegally since 2011, in a plot which is visible from many central points of Yerevan. Neither the former mayor Taron Margaryan, nor the police ever took appropriate measures.

The Criminal Code of Armenia has a separate article on evading payment of taxes, duties or other mandatory payments (Article 205). The tax evasion, which has been committed in large amounts, is punishable with a fine of 2,000 to 3,000 times minimal salaries, or imprisonment of two to five years.

We tried to speak to Surik Khachatryan, but his mobile number was unreachable. The Yerevan Municipality requested that we  send our questions in writing. We have done so.

We weren’t able to get a clarification from the government’s Department of Urban Development, Technical Studies and Fire Safety Inspectorate, since the inspection body is yet to be formed. The former Urban Inspectorate hasn’t answered our calls.