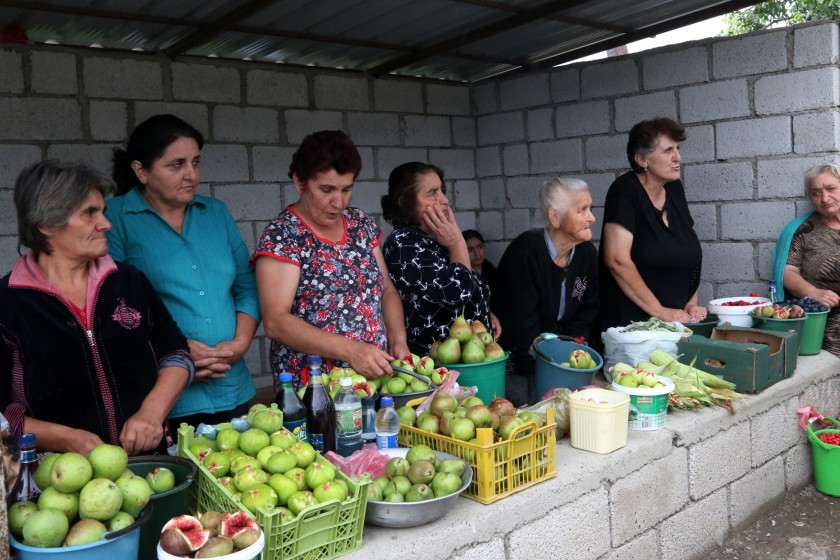 Vazashen is a village of some 871 in Armenia’s Tavush Province, just a few hundred meters from Azerbaijani military trenches on the border.

These trenches are built on lands the village lost to the Azerbaijani Army during the Artsakh War of the early 1990s. Some of the lands separating the two sides have been mined.

Being so close to the border, coupled with the fact that most residents are eking out an existence, makes life in Vazashen all the more challenging.

These risks, however, don’t stop boys in the Vazashen from racing their donkey cart through those parts of the village in range of Azerbaijani gunfire. 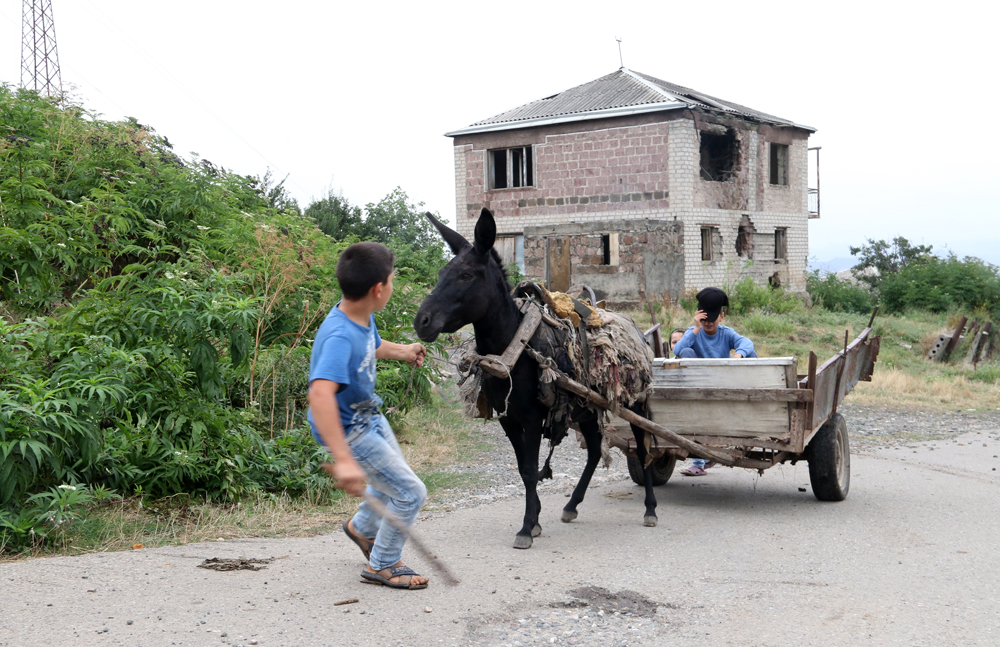 Some of Vazashen’s homes and the marketplace are within range of Azerbaijani sharpshooters and artillery placements some 1,500 meters away. Last year, one of the merchants, 80-year old Knarik Galstyan, luckily escaped a bullet.

The market has operated for seven years, but it was only last year that a wall was built to protect customers and merchants from gunfire. Women in the market say the Azerbaijani guns have been silent of late. 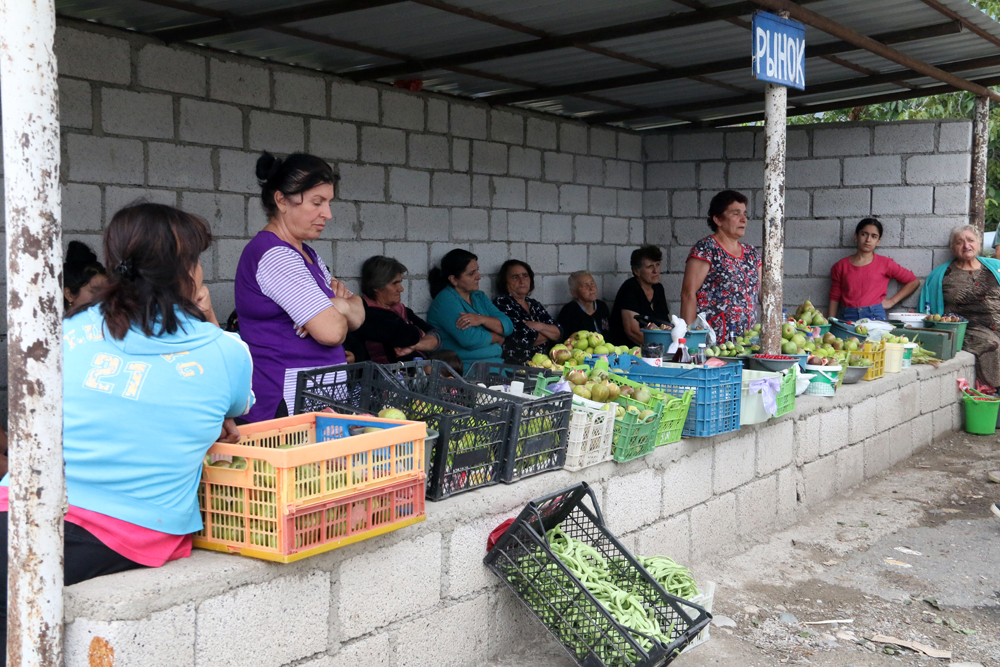 The women sit along the wall, selling their products - fruits or vegetables, homemade vodka and wine. When somebody approaches, they stand up, present the goods and negotiate the price. The market is a free space for those who want to sell their goods, and it’s open from spring to December. 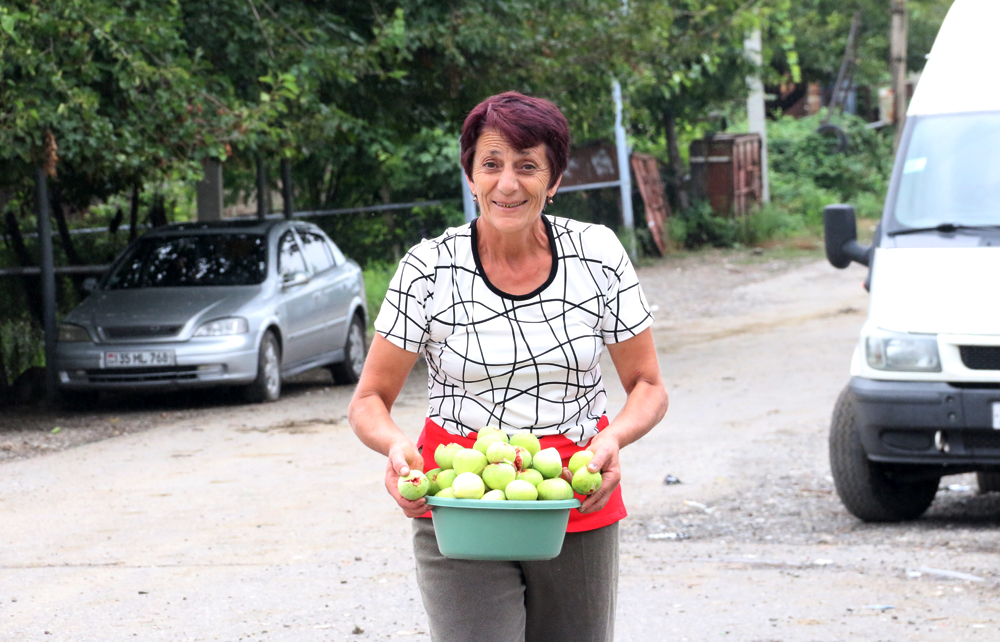 This year, according to villagers, there is lack of fruits in the village due to hail damage. There is no anti-hail station in Vazashen, who market is usually full of pears, apples, figs, grapes, plum, pomegranate, blackberries, etc. The market’s offerings change according to the season. 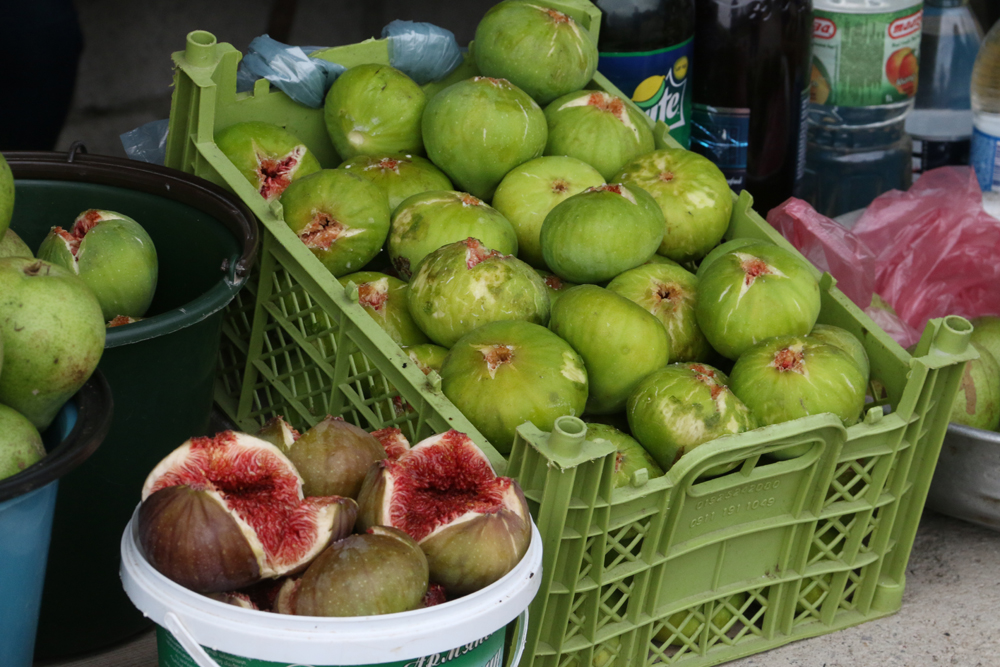 Vazashen is an old village. Prior to 1978, it was called Laligyugh. The name of Vazashen reflects local vineyard production in the Soviet era (“vaz”- grapevine in Armenian), widely used for Armenian brandy production. However, as a result of the 1990s war, border vineyards remained under fire and were destroyed. Azerbaijanis now control hundreds of hectares of former village land.

The traces of the war

Village Mayor Lorik Badiryan, in office for the past ten years, says that most of Vazashen's arable land, mainly used to grow grains, is close to the border. Badiryan says it’s a risky business farming these lands, something residents find off-putting to say the least.

To lessen the risk, Vazashen residents try to cultivate their land in tandem with their Azerbaijani neighbors. This way, the theory goes, they are too busy farming the land to shoot. Residents say that when the Azerbaijanis harvest the crop, they often burn the fields and the fire crosses the border, coming to this side.

Vazashen does not have a combine harvester. Badiryan says the former mayor sold the village combine. Bringing a combine from neighboring villages makes them late for harvesting, raising the danger of shootings and fires. The mayor says the village’s annual budget is 17 million drams, and they hope to buy a combine with government co-financing. 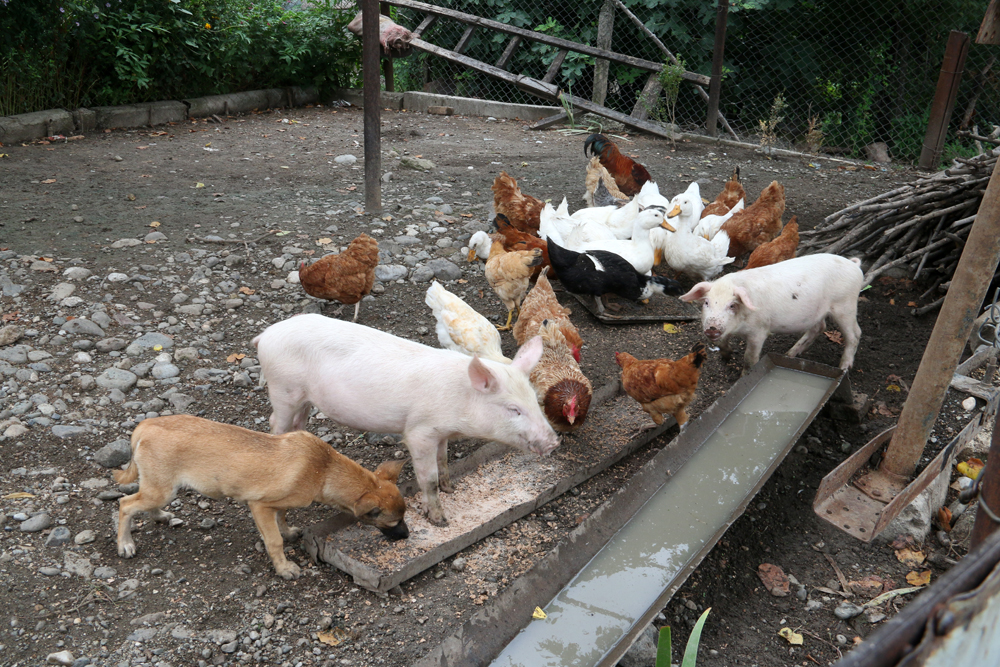 Badiryan says 15 of the village’s inhabitants have moved to the town of Ijevan in recent years. 70% of the village population is living at or below the poverty line, and some 50 families receive state social aid.

Tzovinar Hakobyan was born in the Shamkhor region of Azerbaijan and moved to Vazashen in 1977. She recalls that she lost the connection to her birthplace after the 1988 Artsakh War. 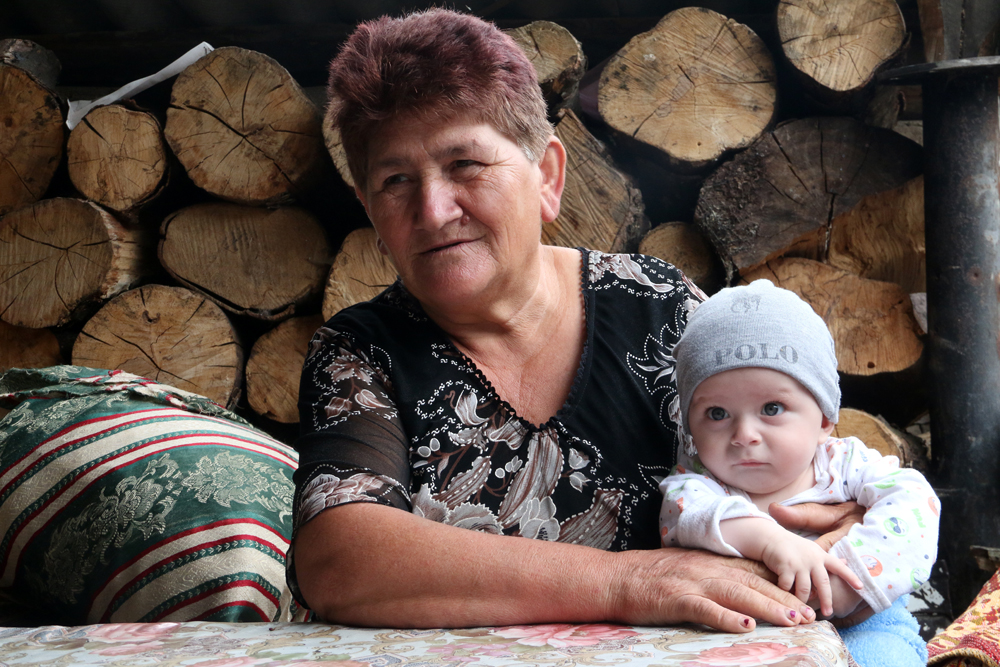 Their family also used to grow grapes, tobacco and vegetables. The vineyards were destroyed by gunfire. Tzovinar says Vazashen had one of the most prosperous economies in the Ijevan region in the Soviet era. Now, the Hakobyans sow beans and potatoes in their yard and have several types of fruit trees.

Tzovinar has five children and 17 grandchildren. Though her sons work abroad, like many others in the village, she does not intend to leave Vazashen. She says that Azerbaijani gunfirehas dropped, and it’s only the children she’s worried about. Adults, she says, are used to the gunfire. 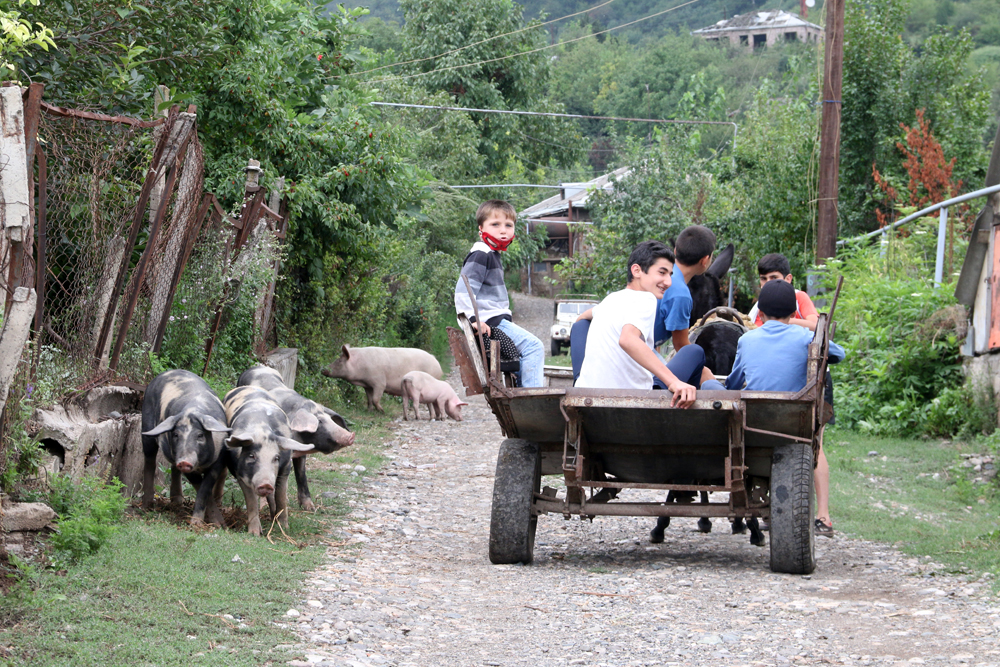 People in Vazashen have high hopes after the recent political changes in Armenia. Women at the market say that they welcomed Nikol Pashinyan on the road, when he toured Tavush Province.

Badiryan points to the lack of irrigation water as one of the village’s main problems. In Soviet times, Vazashen lands were irrigated by the Aghstev River waters, which were pumped by a pumping station. After the Artsakh War, the station remained on the Azerbaijani  side of the border. Residents do receive six to seven hours of drinking water daily, which they also use to irrigate household garden plots.

The mayor says that Prime Minister Pashinyan promised to build a reservoir 2 km away from the village.

“We hope that the issue will be solved. You can’t survive on the border without hoping,” says Badiryan.