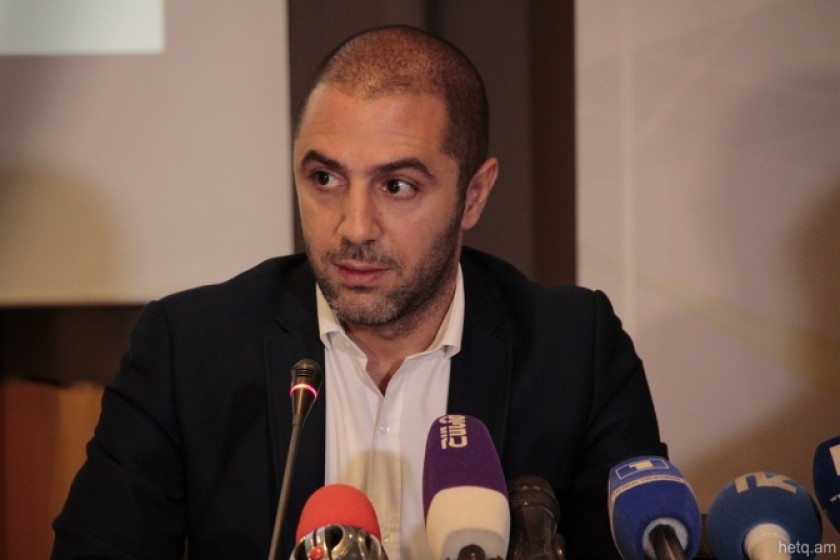 Responding to growing complaints that Sanitek, the company hired by the Yerevan Municipality to collect and dispose of trash in the Armenian capital, isn’t doing a good job, Nicholas Tawil, the company’s director told reporters that the company has invested $14 million in Armenia so far and has greatly improved garbage collection in Yerevan.

Trash collection has been spotty at best in Yerevan during the past two months, resulting in unsanitary conditions throughout the city.

Deflecting rumors that the company had been “taken over” by certain high-ranking officials, Tavil said that Sanitek remains outside the realm of local politics. He denied talk that the resignation of Taron Margaryan as Yerevan mayor in July, had anything to do with the growing garbage crisis.

Tawil said that more than 1,000 trash receptacles have been burnt since Sanitek won the municipal contract, arguing that this fact has seriously impeded normal garbage collection in Yerevan.

The Sanitek director added that company employees are forced to separate construction debris from household trash since it’s all thrown out together.

“Sanitek is not obligated to remove construction waste, but trash in Yerevan isn’t pre-sorted and a lot of it gets thrown in our rubberized bins. This really damages our garbage trucks when loaded. Each truck costs around $20,000,” Tawil told reporters, stressing that Yerevan residents must do more to make the job of trash collection easier.

“Garbage collection is a culture. Everyone must change their attitude towards the service. It starts at each person’s home, the car, the office. The children must also be taught,” Tawil said.

Tawil said that he has discussed these problems with local officials, but to no avail.

The company director claimed that most of the company’s equipment has been out of commission, in need of repair or replacement, resulting in mounds of trash throughout Yerevan.

Tawil said that the company has operated at a loss since the winter of 2016 and would have to invest €7 million over the long-term to turn things around.

Any new investment, he said, would have to wait until after the September 23 election to form a new Yerevan Municipality.

Tawil did not dispute the 25 million-dram fines Sanitek has been slapped with of late for failing to perform its contractual obligations with the city. He proposes that the municipality uses the fines to purchase new trash receptacles, thus compensating the company for its alleged losses.

As to the possibility that Sanitek might pull up stakes in Armenia if the new Yerevan government hires another trash collection company, Tavil skirted the issue, saying that would depend on negotiations with the incoming municipality.

When this reporter asked why Sanitek had waited until after the spring “Velvet Revolution” to declare its losses, and if the company feared doing so before, Tawil said: “Revolution is a very good thing for the country. We are business people and don’t get involved in politics. May God bless this country. A very important thing happened in Armenia. As investors, we have positive expectations.”

Lilu 2019-08-07 23:56:40
I totally agree with Sanitek on this issue & i sympathize with the dilemma they're facing thanks to the sitcom being played on everyone by the ACTOR Hayk Marutyan. I'm sure Lebanese Arabs are not much better but that is not the point; Armenians of Armenia are extremely ignorant & disrespectful of such rules. Even worse, they are also unbelievably stubborn about their ignorant ways. They could care less about taking the time to separate their trash. They could care less about whose property their trash destroys; how it affects the environment, .....& since they could care even less about the starving street animals; they won't waste an IOTA of a SECOND on those miserable souls getting poisoned & dying a torturous death (even more torturous than their miserable life) from eating scraps of rotten food mixed with broken glass, with house-cleaning products, with paint; nails, cosmetics; pharma-drugs, etc...... NOTHING! All that matters is getting THEIR immediate needs met (consuming) & getting rid of whatever is a nuisance to them. (ejecting its by-products). Are you kidding? Think about anything other than what goes on inside of THIER immediate surroundings????? And, you want them to care or consider for one second about Sanitek or what their 'nuisance' does to their' property??? Right! You might as well ask them to believe the FACT that their Saint-Nikolas did not take the power away from Serj but to be GIVEN the power (by Serj) to take THEM for FOOLS!!!!