There’s a section of Yerevan, originally zoned for public use, that has turned into an exclusive residential neighborhood for a number of former high-ranking Armenian government officials.

The area in question is located between Azatutyun and Babayan Streets in the north of the Armenian capital. It was wooded in the Soviet era.

The plan was to build parks, gardens and public pools on the site. It was still undeveloped in the early 2000s when the Yerevan Municipality sold the land. Illegal construction soon followed. 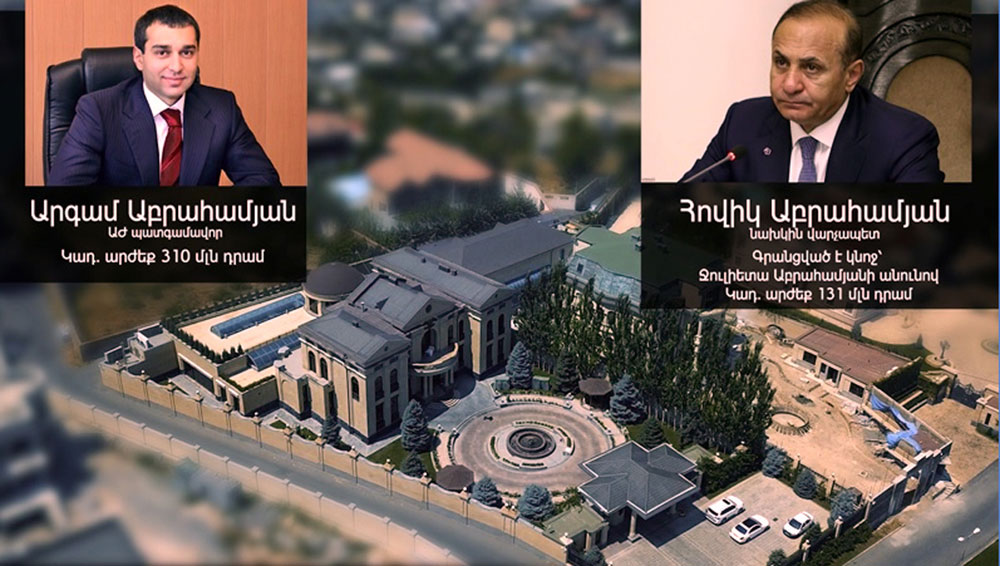 The house registered in the name of Abrahamyan’s wife was bought in 2017, for 630 million drams - $1.31 million at today’s exchange rate. It was purchased after Hovik Abrahamyan resigned as prime minister.

Houses of Other Ex-officials

The Abrahamyans’ closest neighbor is former Yerevan mayor and ex-Minister of Transport and Communication Gagik Beglaryan.

Beglaryan’s house is registered in his wife, Nune Nikolyan’s, name. The land was bought directly from the Yerevan Municipality in 2004-2005, when Beglaryan was mayor. 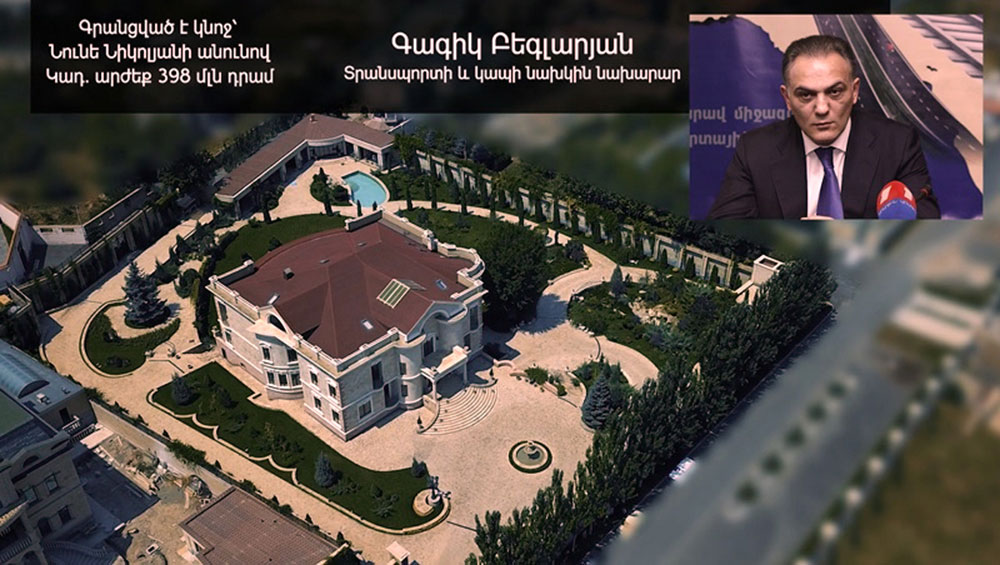 In 2014, when the house was under construction, Nikolyan purchased a plot of land in front of the house for 27 million drams, again from the Yerevan Municipality.

Interestingly, in her 2014 financial disclosure, Nikolyan declared the purchase of a house, but in reality, the Beglaryans constructed it themselves. Nikolyan got a construction permit from the Yerevan Municipality in June 2013.

Hrant Beglaryan, Gagik’s son, owns a two-story house in the neighborhood. He acquired the house from the Yerevan Municipality in 2016, paying 250 million drams. 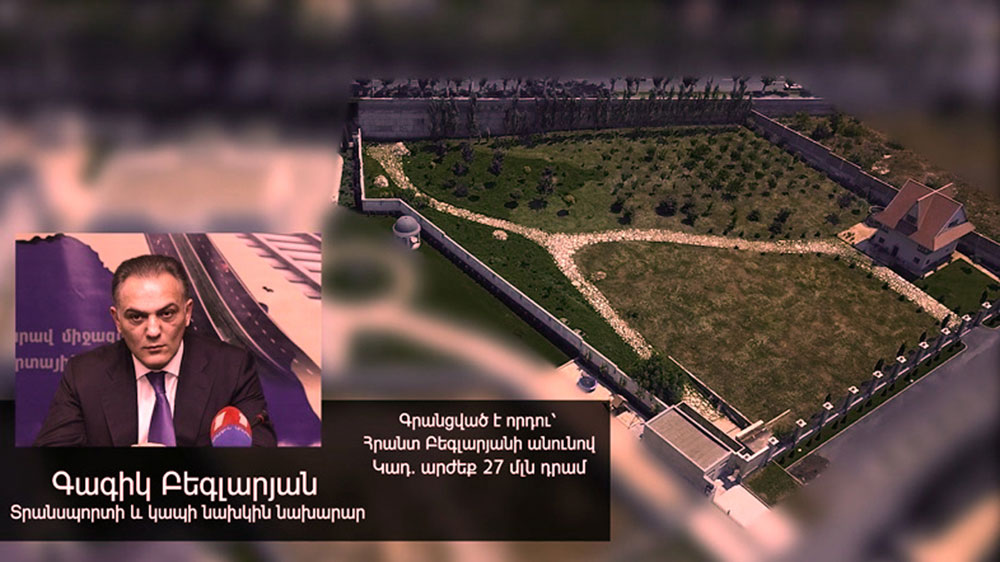 Beglaryan's house and land registered in his son's name

Gagik Abrahamyan, brother of former MP and President of the Union of Armenians of Russia Ara Abrahamyan, was one of the first residents in the area. Gagik’s house  according to the State Cadastre Committee, has the highest real estate value in Armenia - 428 million drams ($888,600).

In the 2000s, Gagik Abrahamyan acquired the largest plot of land (0.7 hectares) in the area. In 2001-2002, he signed a lease agreement with the Yerevan Municipality for 70 years. A few years later, he managed to privatize the area leased to him. 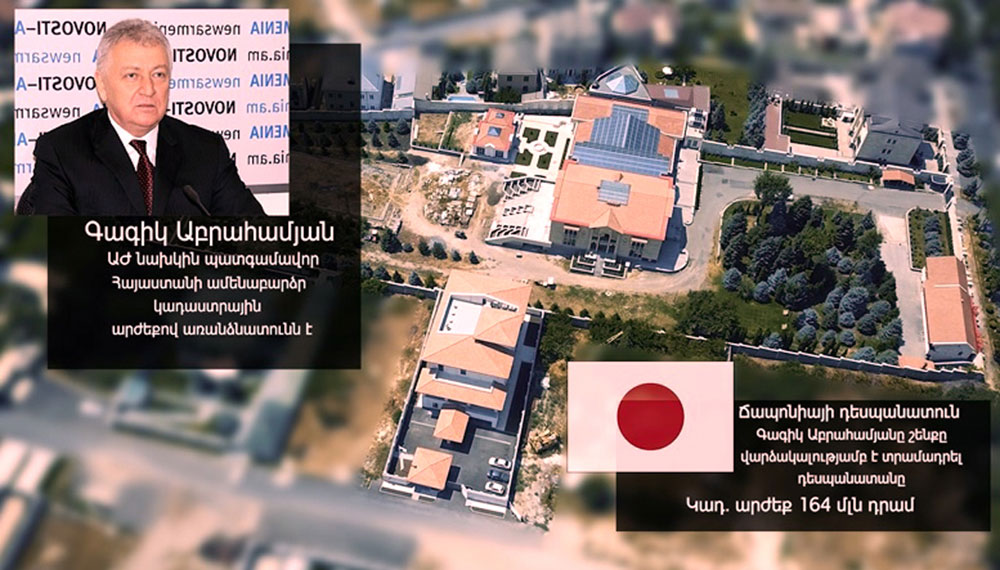 After privatizing, Gagik Abrahamyan built a private house, which is currently leased to the Japanese Embassy in Yerevan.

The houses, registered in the name of former Prime Minister Karen Karapetyan’s brother, Vladimir Karapetyan, and the wife of former SRC Chairman Vardan Harutyunyan, Zarine Danielyan, were both constructed by combining several pieces of land.

One of the plots belonged to the wife of Gagik Beglaryan, Nune Nikolyan.  The other two plots belonged to NGOs that were issued free use of the land by the Yerevan Municipality. They later sold these plots to different officials and their affiliates. 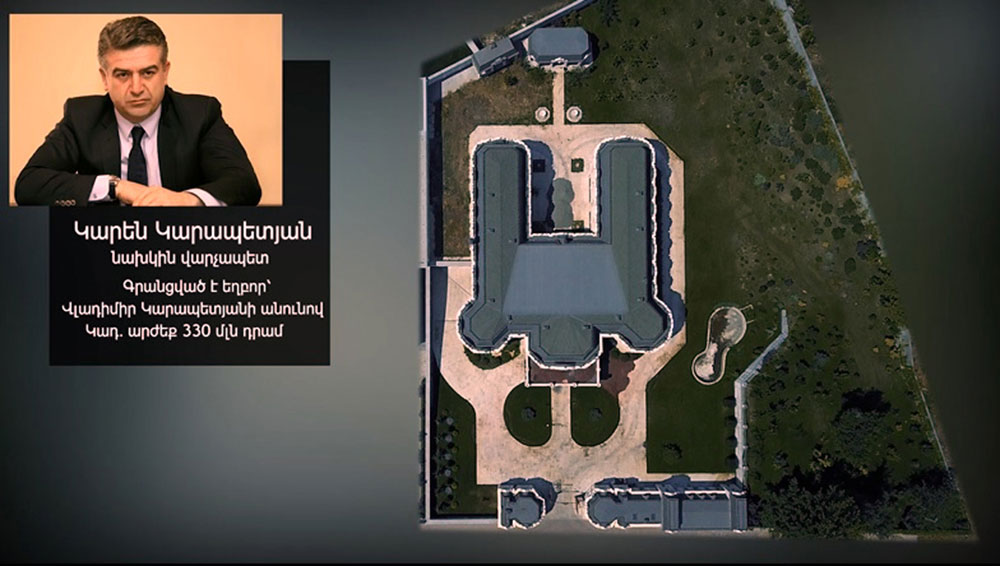 In a 2017 interview, Karen Karapetyan didn’t deny the fact that the house actually belongs to him and said that there were no trees at the site when they built the house.

Photos taken by aerial drones show that although the house is there, construction is ongoing. It appears the house is uninhabited.

Numerous transactions and documents for the area show that many officials have privatized community-owned plots under the name of implementing social and investment projects in this area. Later on, they either sold the plots to others or built houses for themselves.