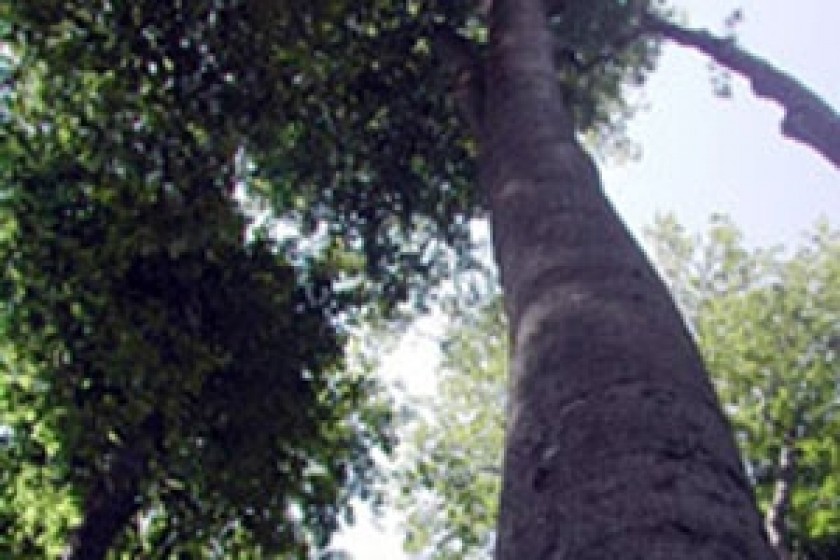 A Black Cloud Over Teghut

Very few of Armenia's once abundant forests are left today. Over the last 13 years, forests have fallen victim first to the blockade and the resulting energy crisis, and then to human greed and carelessness. A number of companies have been cutting down trees for lumber, despite the fact that deforestation for industrial purposes is prohibited. As we have reported recently, the threat of destruction now hangs over the Teghut forest in the Lori Marz as well (See also: 600 Hectares of Forest Under Threat). Armenian Copper plans to clear 600 hectares of forest in Teghut to open and the copper and molybdenum reserves located beneath it for exploitation, and to build an extraction plant nearby.

Throughout the world, open mining has long been out of use in new mines. "They should revert to closed exploitation, then both sides will be happy. But they want to get rich quick, using the cheapest method available. This is common practice in Armenia, which is why we're always in conflict with different companies and organizations. The ecological situation in Alaverdi, where Armenian Copper runs another plant extracting the same minerals, is catastrophic and worrying," said Karine Danielyan, president of the Association for Sustainable Human Development.

Minister of Ecology Vardan Aivazyan has said that none of the trees in Teghut are listed in the Red Book, and that there are few valuable species there. But according to Eleonora Gabrielyan, president of the Armenian Botanical Society and doctor of biological sciences, Teghut is home to Armenian Red Book species such as the walnut, Trautvetter's maple, and the Caucasian Persimmon, of the ebony family. The last has been officially considered very rare and on the verge of extinction as recently as 1989-1990. Gabrielyan also said that there were a number of other plants listed in the Red Book in Teghut.

"Besides the trees, flowers, and other plants listed in the Armenian Red Book, one can also find Atryushenko's snowdrop (Galantus artjushenko), which is a unique and very beautiful flower. It belongs to the Amaryllidaceae family. There is an international convention regarding the protection of that family. When I took a few bulbs of Artyushenko's snowdrop with me to show my colleagues at London's Kew Gardens University, they were very happy to see them, but they also reprimanded me at the same time for transporting those bulbs when I knew about the convention.

"It is tragic that money and profit are of primary importance to businessmen and the government today, but nobody is thinking about the fact that this deforestation will bring desertification with it, as it did in Vanadzor. The forest there has rarefied, it isn't like before, and when it rains, the soil gets eroded towards the city. Ijevan is in the same condition today. If the other forests in Armenia end up like this our water sources will dry up, because forests play an important role in the water cycle. Near the village of Athan in Lori, there was a lake which used to have six water sources around it. They have all dried up now, because the forest higher up has been destroyed.

"If the Teghut mines are opened, it will lead to the contamination of the Shnogh River Basin, and the pollutants will reach the Debed River, which is already very polluted due to the Alaverdi plant. We should also remember that the Debed flows into the Kur, which ends up in the Caspian Sea, so we could end up facing international charges of cross-border pollution," Professor Gabrielyan explained.

The Teghut forest is also home to animal species listed in the Red Book. "The rock eagle and snake eagle can be found here and both are listed as endangered species in the Armenian and International Red Books. There are also certain small bird species which are listed in the Armenian Red Book," said Martin Adamyan, doctor of biological sciences and director of the Biological Museum at the National Academy of Sciences Institute of Biology.

"The gray bear, listed in the Armenian Red Book, can be found in the forests of Lori, including Teghut. Deforestation in Teghut would be a deadly blow to nature. Of course, our country has economic problems which need to be solved as well, but I don't understand why one can't tap into the mineral reserves beneath Teghut using the underground method, thus exploiting the mine while keeping it closed. Armenian Copper wants to build an extraction plant there as well, which would pollute and simply ruin the environment around it. If that plant is to work with the latest technology, that is to say, if it is going to have modern filters - as they promise it will - then why hasn't Armenian Copper installed those filters in the Alaverdi Copper and Molybdenum Plant as well? That plant has been harming the environment and the health of the residents there for so long. Many women there have been condemned to infertility, and the number of people with respiratory diseases is very great," said Karen Manvelyan, director of the World Wildlife Fund office in Armenia.

As recently as early September of this year, a coalition of Armenian ecological NGOs sent a letter to Valery Mejlumyan, the President of Armenian Copper, voicing their concern over the possible destruction of the Teghut forest and inviting him to meet with them. Mejlumyan never replied.