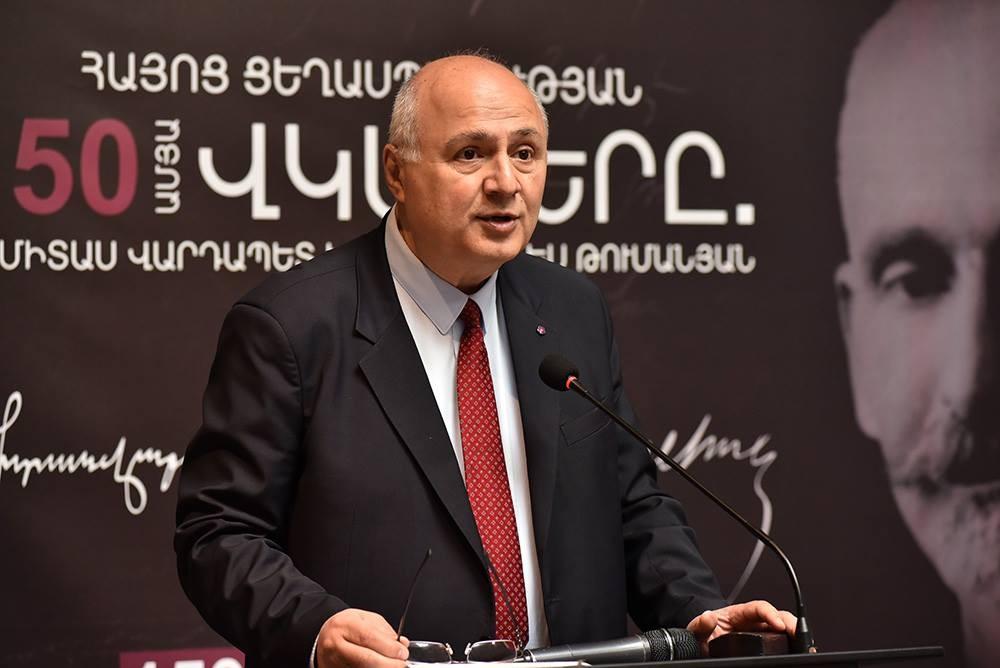 This year, on April 24, the traditional march to the Tzitzernakaberd Memorial will not take place. For the first time, this unique event uniting Armenians will not take place due to the demands of preventing the contagion. Do you think that this interruption will further undermine the continuity of the 52-year-old event?

I don't think this interruption will have any effect on our memory, much less that memory. It is true that our people have been visiting the memorial for 52 years, but that memory is more than 100 years old.

Even when there were no marches, people remembered the Armenian Genocide in various ways. In the Diaspora, people remembered through church ceremonies, and both in the Diaspora and in Armenia, they were remembered by telling various stories, reading books, and so on. This memory has been with us for more than a century and will not be shattered, because it is also one of the pillars of Armenian identity, which really unites Armenians of all origins in the world.

It is also a memory that unites people in the struggle for justice, for the truth, for the restoration of rights. Injustice has been done to Armenians. The world has begun to recognize and evaluate what happened. It is necessary to continue to remember and demand, and to pass that memory on to future generations.

Now everyone is saying that a lot will change in the world after this pandemic, but they do not specify what exactly. I am convinced that the values ​​for the people will not change, the struggle for justice, truth, the restoration of the rights of the oppressed peoples will continue. The spiritual values ​​that have been passed down to us from our parents, school, and literature will not change, and this whole movement for the recognition of the genocide is in that orbit.

These are values ​​that will last for a few thousand years, and I hope they will continue to do so in the future.

The Armenian Genocide Museum-Institute (AGMI) planned to hold a "March of Remembrance" on April 24 this year, urging our compatriots to visit the Armenian Genocide Memorial on that day with a photo-panel of their genocide victim or survivor. Since the epidemic does not allow us to do so, we decided to move the "Memory March" to a computer-generated level.

We call on the citizens of Armenia and the friends of the Armenian people to replace their photos on Facebook on April 24 with photos of their relatives (victims or survivors) created especially for that purpose.

The Armenian Genocide Museum-Institute has made this a part of its work since last year.

We have a wonderful motto: "I remember. and I demand," but the answer to the question "Who do I remember?" A century later, perhaps, the time has come to detail who we will remember.

We launched the “Share your family history, pass on your memory to future generations” project on our website in 2019. It did not receive a wide response.

April 24, according to the official calendar of the Republic of Armenia, is called Armenian Genocide Remembrance Day.

On that day, we all pay tribute to the memory of the innocent victims of the genocide. And who are they? After all, the victims, as well as the survivors, are people with names and surnames. If information about them is preserved, let us show it to ourselves and to the world. The planned march would show that the memory of the Armenian Genocide is strong, and I have no doubt that it is strong.

For decades, Holocaust researchers, particularly at the Yad Vashem Museum, have been trying to recover personal data from Holocaust victims. A database of victims and survivors of the Holocaust has been created, through which the names and data of about 4.7 million of the 6 million victims have been verified.

In the case of the Armenian Genocide, we cannot take any such pride because of a lack of similar achievements.

Attempts have been made, but for some reason they have remained half complete. This is a matter of many years. One way to collect this material is to contact people directly. As the descendants of the Western Armenian immigrants make up about half of the population of the Republic of Armenia today, we thought that by collecting the stories of the photos and other data they offered, we would make the archive complete.

In the future, we will ask them to fill out questionnaires, and in this way an important step will be taken in the process of designing the database.

What achievements will the Genocide Institute-Museum present for the 105th anniversary of the genocide and what new items have been obtained?

Last year, the Johannes Lepsius House-Archive in Potsdam provided us with digitally archived materials of exceptional significance in connection with the Armenian massacres. Most of them are directly related to the Hamidian Massacres of 1895-1897 and the orphanage activities that began then.

These are documents: letters, reports, descriptions, reports. This is the personal archive of Lepsius. The majority were either written by Lepsius or sent to him. The digitization of archival materials was carried out by a member of the editorial staff of the AGMI "Journal of Genocide Studies" scientific periodical, Ph.D. Hayk Martirosyan as part of a scholarship allocated by the Evangelical Church in Germany.

The institute's library includes the three- volume "Germany, Armenia and Turkey in 1895-1925, documents and newspapers, from the Johannes-Lepsius-Archive (by Hermann Goltz).

Eduard Fichijian, a Berlin-based engineer, once copied 36 packages of microfilm (10x4x10 cm each) from the archives of the German Ministry of Foreign Affairs, which date back to 1911-1921 and are directly related to the Armenian Cause and the Armenian Genocide.

Fichijian did it with his own resources and provided the original microfilms to AGMI. This is a significant addition to the museum-institute's funds. Armenian Ambassador to Germany Ashot Smbatyan assisted in shipping the microfilm from Berlin.

Writer Krikor Janigian kept 7-8 diaries from the 60s and 70s of the last century. He always wanted to hand it over to the museum, but for some reason it was postponed. We asked him because we thought it was time to hand over those memoirs. One of them was a diary, from 1915, kept from the place of exile and Aleppo. We have few such diaries.

Do you agree that Turkey has not ended the genocide against Armenians? The physical extermination and deportation of Armenians ended at the beginning of the last century, but the policy of assimilating the Armenian identity has continued to this day. Armenian archeological sites ​​are presented as Turkish in the most famous museums of the world. What is the attitude of the AGMI to falsifying history and assimilating cultural heritage?

Well-known genocide scholar Professor Gregory Stanton singles out ten stages of genocide in his The Stages of Genocide, the last of which he considers to be denial. This is a phenomenon that we have been witnessing for more than 100 years in the case of Turkey. This is the main line of Turkey’s policy.

The assimilation of Armenian cultural values ​​and their destruction continues in Turkey.

In recent decades, large segments of the people in Turkey have engaged in the destruction of Armenian cultural values. I’m talking about the so-called gold rush, which prompts people to destroy everything from graves to buildings.

The government no longer gets involved, letting the people to freely destroy cultural values. The process of assimilating the cultural heritage continues and is witnessed by thousands of pilgrims visiting Western Armenia, through whom the photos appear on social networks.

There was a lot of looting during the genocide, including the theft of many and carpets and fabrics.

Armenian carpets were placed in many museums around the world and were presented as works of Turkish art. They still are.

I am convinced that the problem is also in us. We must be able to counteract it by providing our material values ​​to the world. For several years, there has been talk of creating a carpet museum. An attempt was made to create a private carpet museum, but, unfortunately, it remained unfinished. The state must get involved.

There are many carpets in museums, and I am convinced that they need to be put together. Photo albums on these carpets need to be published. In this way, the historical truth must be gradually restored.