In 2018, three times more Armenians were deported from Europe than in 2017

“They broke down the doors at 5 in the morning. My eldest daughter heard the commotion and rushed out to the hallway. She passed out from fear. They beat my wife, four months pregnant, my young children, and my disabled son, and dragged them out. They didn’t even let them put on shoes or clothes.”

This is how Hamlet Sadoyan describes how German law enforcement officials deported his family from Germany on that fateful day in June of 2018, to send them back to Armenia.

Mr. Sadoyan, now back in Armenia, told Hetq that he wasn’t home on that fateful day, having gone to Cologne to inquire about his son Gor’s residency status.

Everything changed for the Sadoyans on March 29, 2014 when 17-year-old Gor was involved in an automobile accident in Armenia. Then studying at the Arno Babajanyan State Musical-Pedagogical College in Yerevan, Gor suffered a spinal fracture that restricted the movement of his hands and legs. 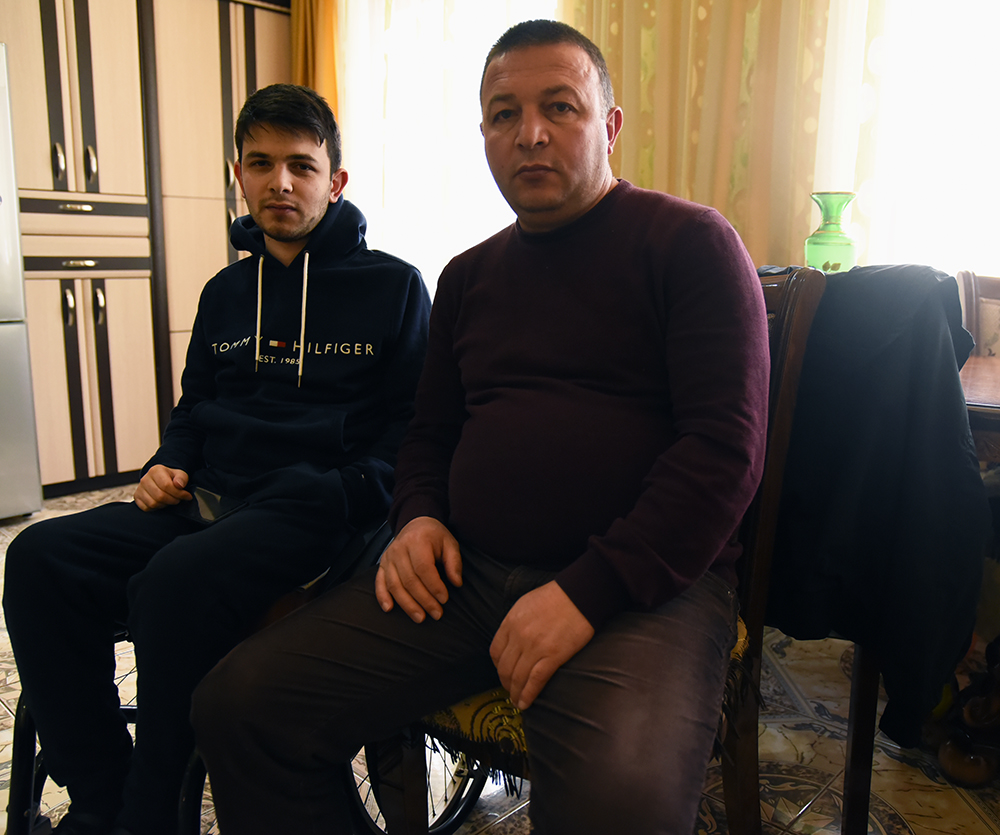 Prior to the accident, Mr. Sadoyan says he never contemplated leaving Armenia. The family illegally made their way to Germany, to get Gor the best medical treatment available, and then turned themselves over to German authorities.

They spent six weeks in a refugee center and were later transferred to an apartment allocated them in the town of Neuwied. The Sadoyans spent 3.5 years in Germany before being sent back to Armenia.

Mr. Sadoyan told Hetq that while he’s grateful for the assistance provided by the German government, he cannot fathom the viciousness perpetrated by German law enforcement. He showed Hetq the following photos allegedly portraying the bruises his wife suffered at the hands of German police.

Hetq contacted Germany’s Federal Office for Migration and Refugees (BAMF) for clarification of the abuse charge. We’ll publish their response when received.

According to Hamlet Sadoyan, German authorities deported his family because they claimed that   individuals with disabilities are protected in Armenia.

“People in the Armenian government told the German judge that the disabled are protected since they receive pensions. But they didn’t say how much. The judge grinned when I said that the disabled get around €30 a month.” 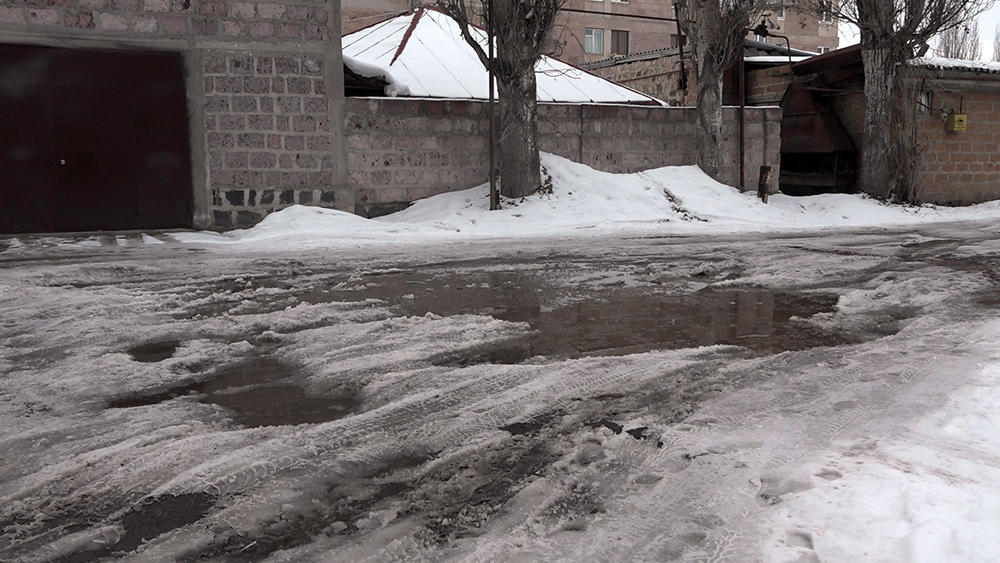 “Please, publish a photo of our yard in Charentsavan. He hasn’t left the house in months. How can my son Gor get around in a wheelchair?” Mr. Sadoyan rhetorically asks.

Gor regained some mobility a bit after receiving physical therapy in Germany. Upon returning to Armenia, such treatment was halted. It costs too much.

The family hasn’t received any government assistance since returning last June. The Armenian Caritas Benevolent NGO has promised to purchase a car for Mr. Sadoyan so he can make money working as a cabbie.

Mr. Sadoyan says he’s seriously thinking of leaving yet again because he sees no future for Gor in Armenia.

“Not being able to leave the house has negatively impacted his psychological make-up. Where can he study or find work in Charentsavan?” asks Gor’s father.

In 2018, three times more Armenians were deported from Europe than in 2017. This is the figure supplied by Armenian Caritas and is based on the number of people applying for assistance. There is no official Armenian government data on the number of Armenian citizens being evicted. 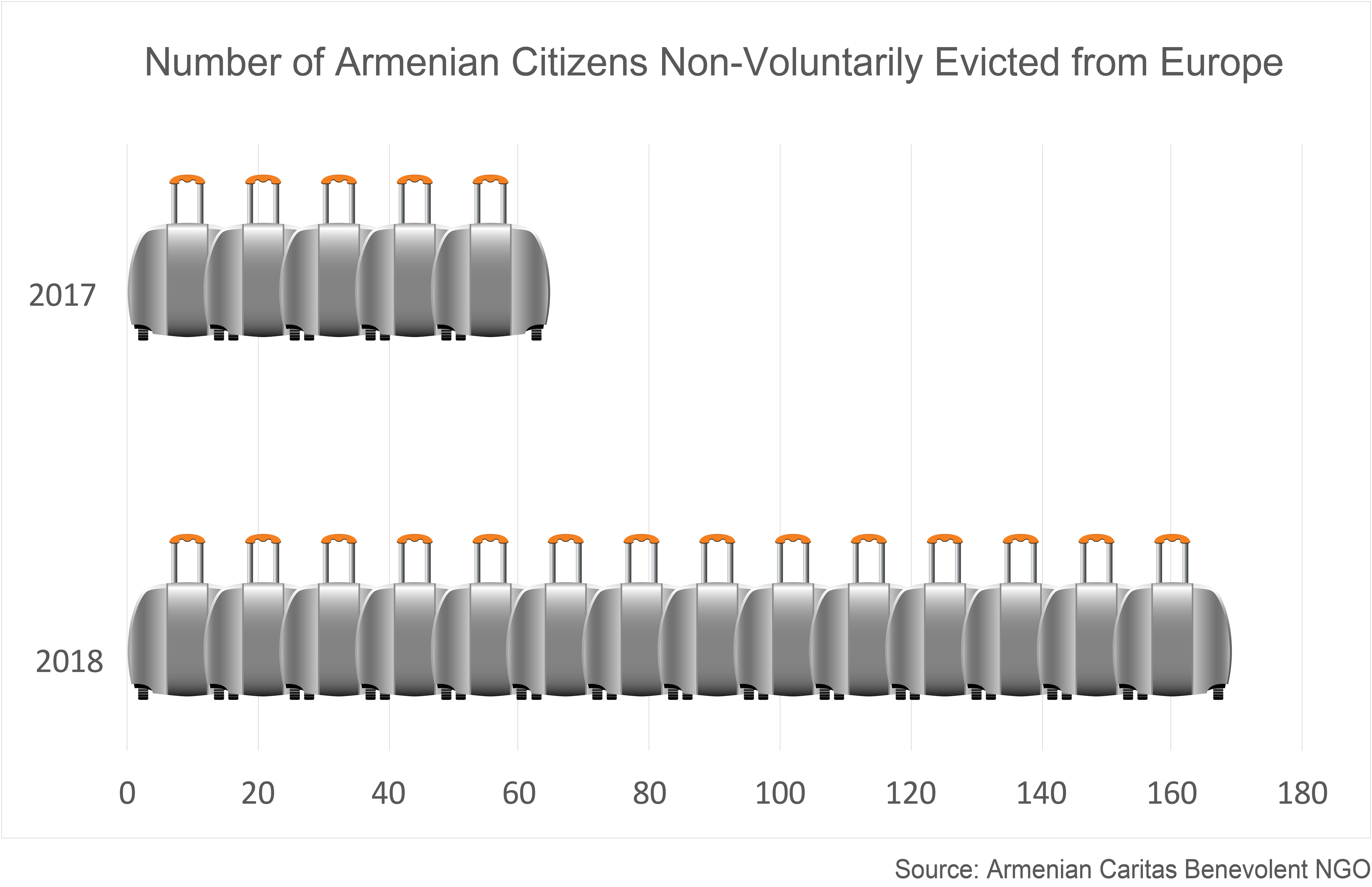 Lousineh Stepanyan, who runs the Migration and Development Program at Armenian Caritas, says the issue of sending back Armenian citizens intensified in 2015, when most of  Europe opened its doors to Syrian refugees.

“People leave Armenia for a better life, while Europe accepts those who flee their countries to save their lives. When you look at those leaving Sudan, Afghanistan, Iraq and Syria, well, their plight is much worse,” says Stepanyan.

Before deporting anyone, the European Union’s migration services must first verify an individual’s identity. To confirm the identity of Armenian citizens, Armenia’s Migration Service assists its EU counterparts, according to a 2014 EU-Armenia Readmission Agreement.

Applications filed by various EU countries with Armenia’s Migration Service, seeking to verify the identities of Armenian citizens in their midst, have quadrupled in the last two years. 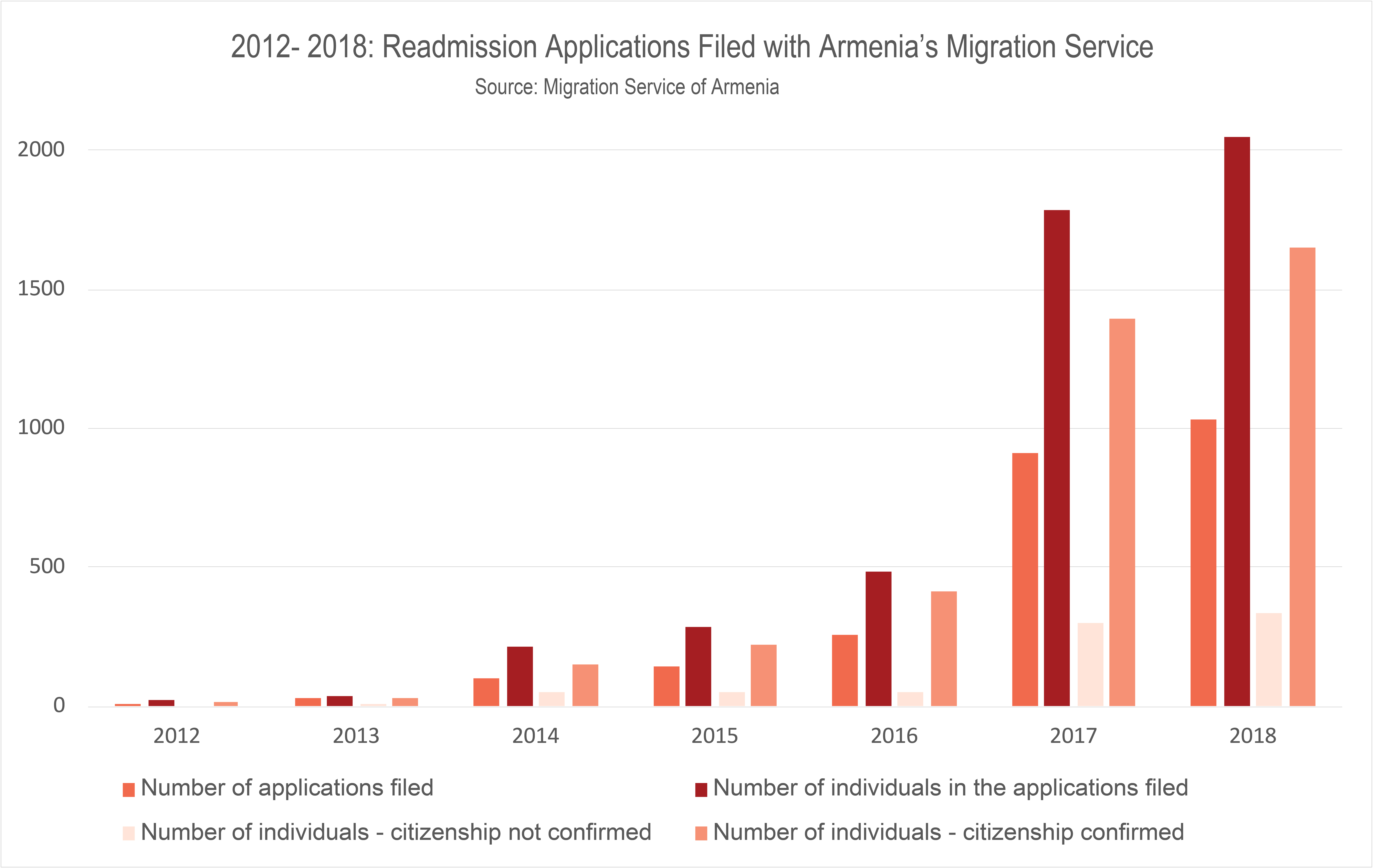 Armenia’s Migration Service notes that the above data doesn’t reflect the total number of Armenian citizens evicted given that even if Armenian citizenship has been confirmed, this doesn’t mean that the individual in question has physically been returned.

Migration Service Head Armen Ghazaryan told Hetq that a new electronic system is being installed that will assist the government in knowing whether a person whose identity has been verified has actually been returned to Armenia or not. The system is financed by the European Union and the International Centre for Migration Policy Development (ICMPD).

In Armenia, NGO’s shoulder the burden of reintegrating those evicted from Europe

Ghazaryan admits that reintegrating individuals deported from Europe is mostly being carried out by civil sector organizations. They are the ones allocating financial assistance and other services. 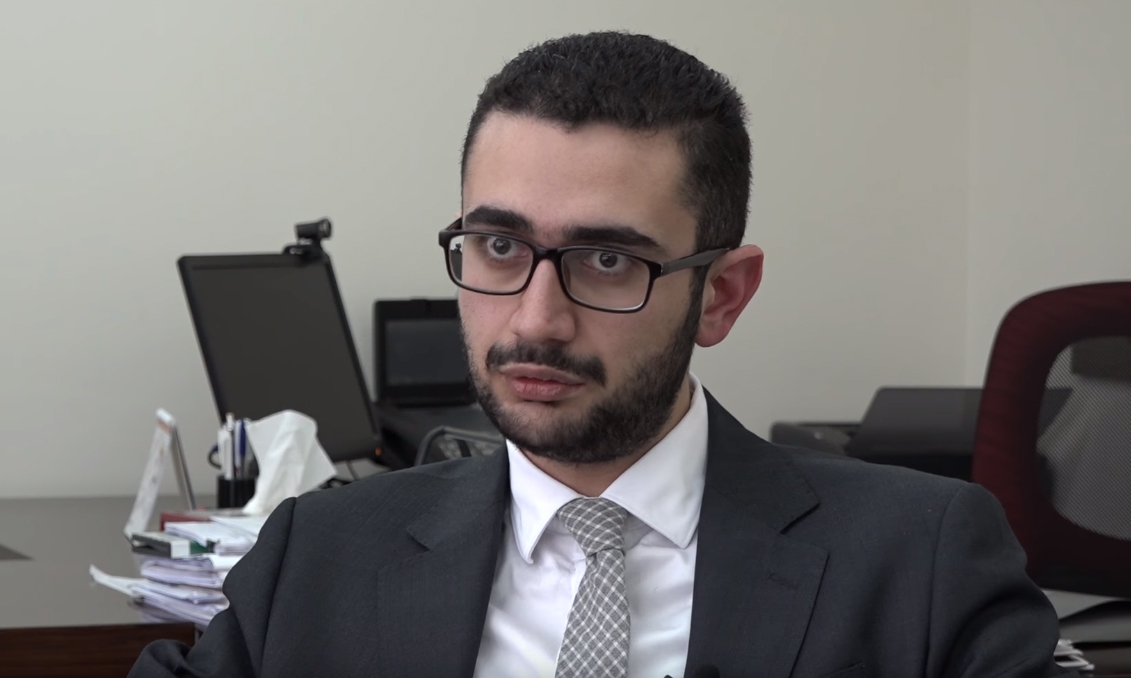 Ghazaryan says his agency is reviewing Armenia’s integration policy and that a new program of action and new legal decisions are expected.

He says it’s too early to talk about possible government aid to those returning.

Lousineh Stepanyan, from Armenian Caritas, says the reintegration hurdle stems from the face that those evicted aren’t registered as a separate vulnerable group in Armenia. 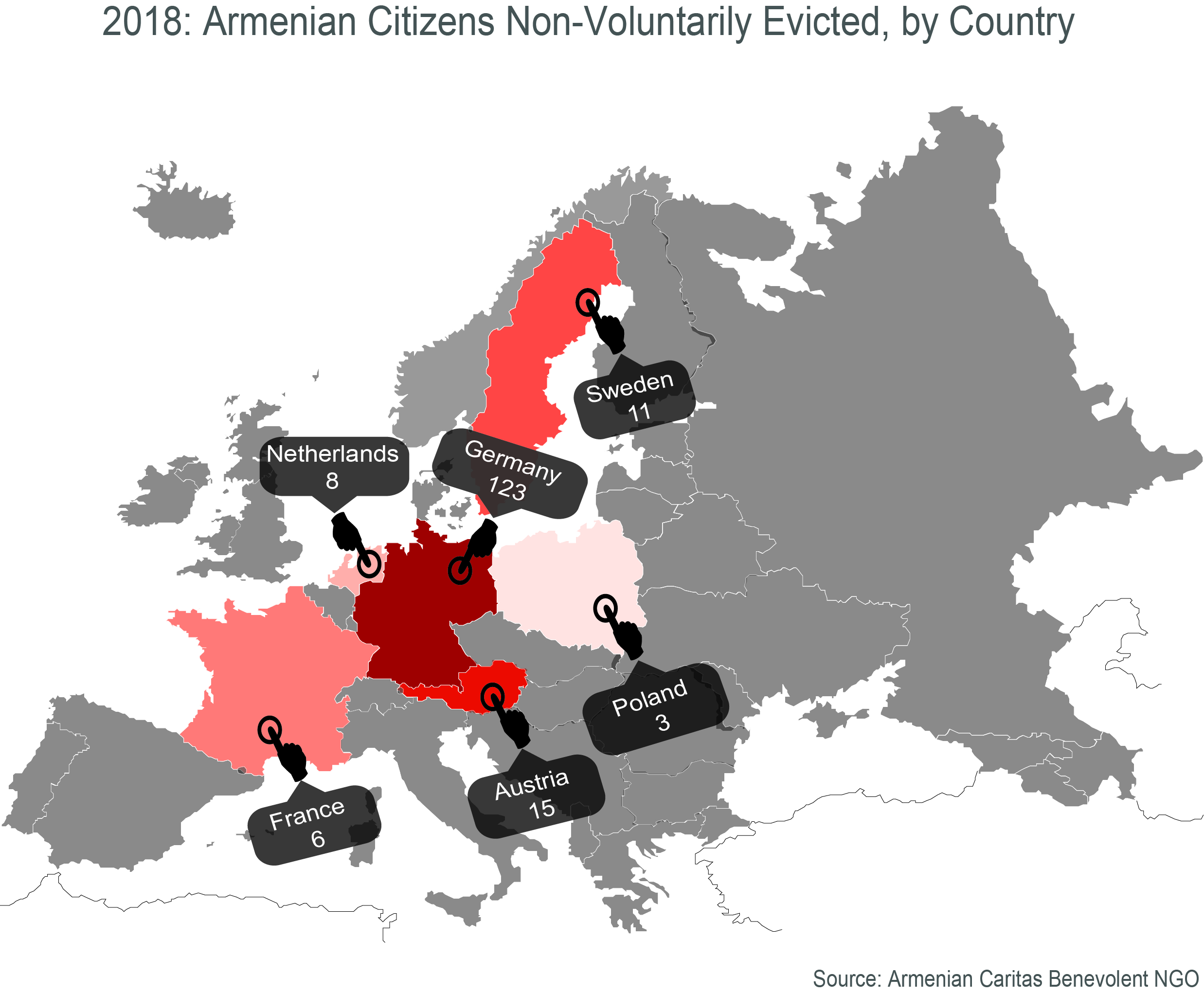 Most of those being deported from Europe are the elderly or have health issues.

Stepanyan says that in the past mostly middle-aged people were being returned, but that more and more it’s the elderly or those with health issues.

“It seems to me EU countries are returning those whom are seen as non-essential individuals. The infirmed and the elderly. Those with no beneficial skills.”

Andranik Mamikonyan left Armenia for Germany in 2012. Restricted to getting around with crutches, he turned himself in to German authorities and was granted residency status four months later.

He says it was much easier getting residency status back then when compared to today.

Mamikonyan knew the Sadoyans when they resided in Germany. He sends some of the medical apparatuses he gets from the German government to Armenia, to Gor Sadoyan. Mamikonyan would like to send an electronic wheelchair to Gor as well, but the customs fee is too pricey.

Mamikonyan told Hetq that when Armenian Prime Minister Nikol Pashinyan recently visited Cologne, those with disabilities who had left Armenia asked the prime minister about the government’s plan to reintegrate those evicted from Europe.

Mamikonyan says that Pashinyan responded that the government would be studying the matter.

“We are human beings as well who have the right to a normal life. I can travel from Cologne to Berlin, by myself, with a wheelchair. In Armenia, those using wheelchairs face obstacles everywhere.”

The number of Armenians seeking asylum in Europe has dropped

According to Eurostat data, the number of Armenian citizens applying for asylum in EU countries dropped threefold in 2018 when compared to 2017.

Over the last ten years, on average, 6,489 individuals from Armenia applied for asylum, of which half were rejected. 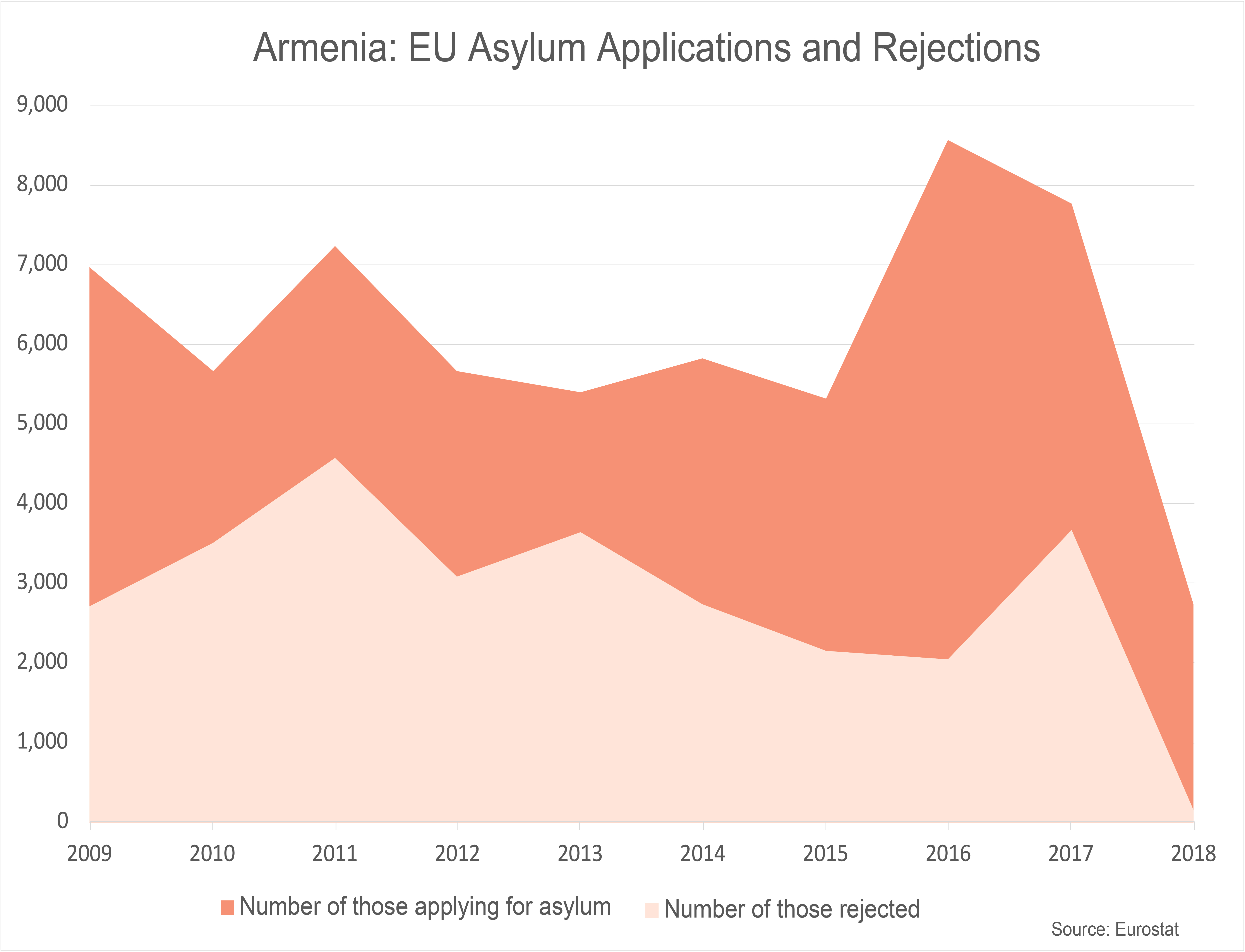 “We want to have regulated and legal migration. Our citizens must understand that it’s better to travel legally, otherwise we can’t expect a more liberal visa regime,” Ghazaryan says.