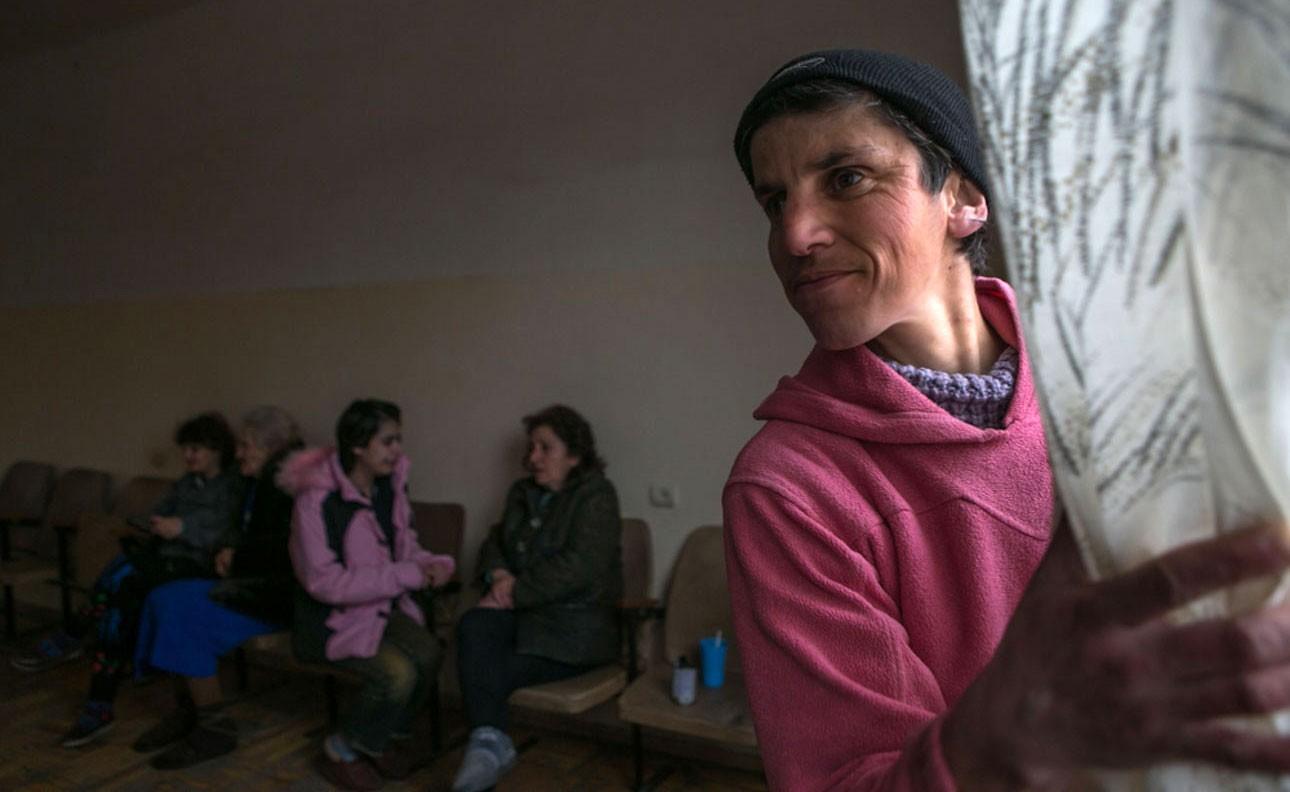 Armenia’s only homeless shelter is located in Vardashen, a small community just a stone’s throw from Yerevan’s Erebuni Fortress.

Conditions at the shelter have gotten so bad  that residents recently contacted Hetq for help.

It turns out that heating at the shelter has been switched off since March 1, leaving residents shivering in their rooms. Electric sockets in the rooms were also disconnected, making it impossible to boil water for tea  or charge telephones. The sockets were working in the corridor. Thankfully, lighting in the rooms hadn’t been switched off.

Hetq first wrote about the shelter in a January 2014 article entitled Out in the Cold: 1,000 Homeless in Yerevan, Only 10% of Which Are in Temporary Shelters.

Over the years, residents have pointed out a number of violations at the shelter. They claim their rights are restricted, the food they’re served is terrible, daily heating in the rooms is insufficient, and that there’s drug and alcohol use at the facility. 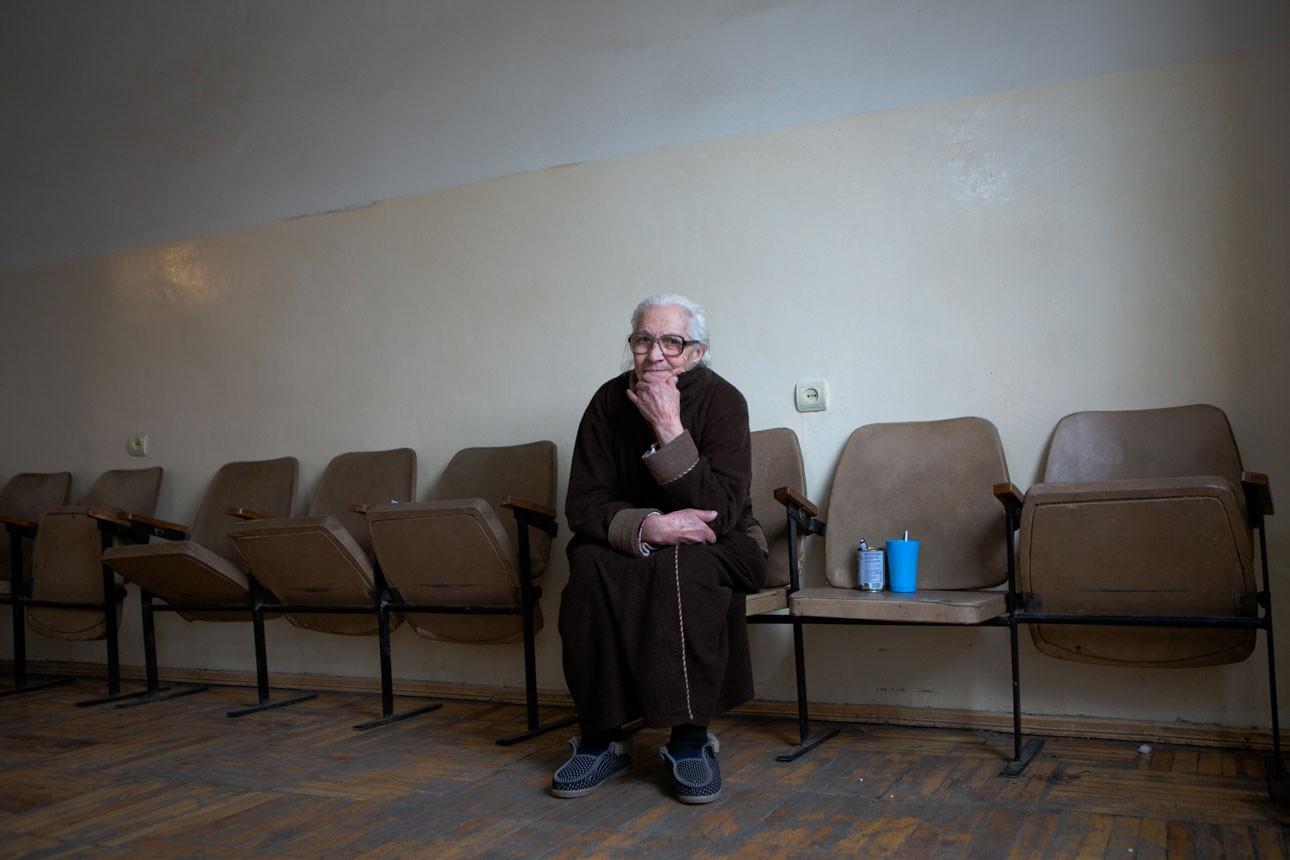 They also charge the director with nepotism, noting the abundance of his relatives in the staff.

Shelter residents claim clothing donations do not reach their intended recipients and that shower access is limited. They say that fellow residents suffering from a variety of mental illnesses are not properly monitored. During Hetq’s unannounced visits to the shelter, our reporters have seen the use of alcoholic beverages and violations of the smoking ban.

After receiving the recent phone call, we decided to visit the shelter and investigate the situation.

We asked a representative from the Ministry of Labor and Social Affairs to join us, since it’s a special facility. Arthur Kesoyan, Head of the Disabled and Elderly Issues Department at the ministry, came with us.

Shortly before we arrived on March 5, electricity in the rooms had been restored, the shelter   cleaned, and the rooms put in order. The entire staff  awaited our arrival, despite our efforts to show up unannounced.

In January 2014, the homeless shelter in the village of Haghtanak was moved to Vardashen and combined with the Danish-Armenian Hans Christian Kofoed Charitable Foundation.

According to the Charter, the foundation is based on the principle of "help for self-help" of those in socially vulnerable conditions.

The foundation is supposed to be organizing its activities along the same principles as the school in Denmark founded by the Kofoeds in 1928.

Founded in 2000, it first provided short-term vocational training, including cooking, hairdressing, manicure, make-up, pottery,etc., for the socially vulnerable aged over 20.

Since 2014, it has changed its mandate and has undertaken the function of providing shelter to the homeless.

Shavarsh Khachatryan, Director of the Hans Christian Kofoed Charitable Foundation, justified the lack of heating by saying that the "Winter Program” for  the homeless starts in November and ends on March 1, after which there is no heating.

At the time of our visit, shelter residents were wearing coats in their rooms. Some were in bed, wearing layers of clothes to keep warm.

During our visit, the staff assured us that shelter residents were taking showers two or three times a week. 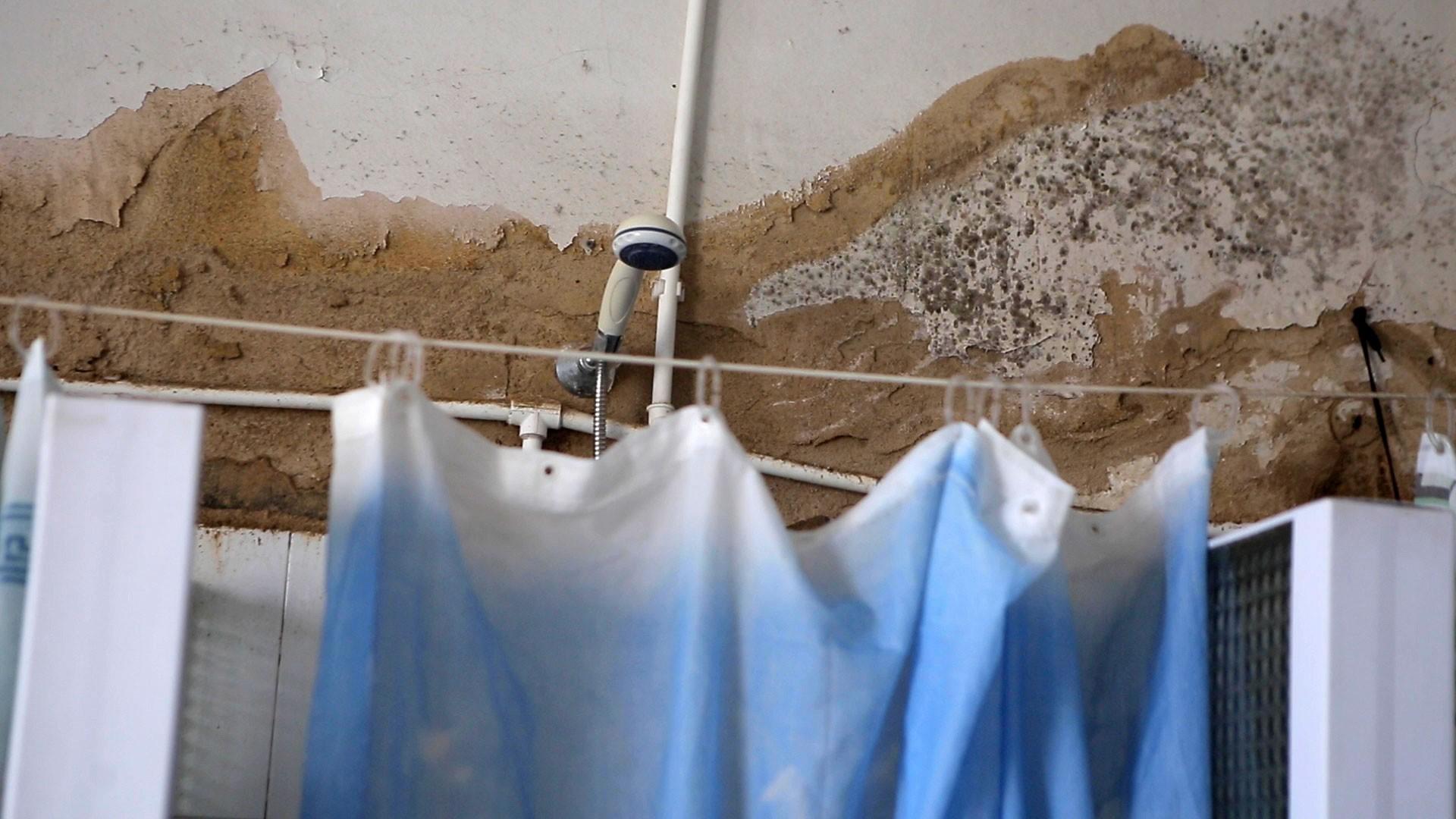 "We just manage to shower for 10-20 minutes once a week. It takes 10 minutes to undress and then dress. If you are slower, they will beat on the door until you get out,” says resident Vanik.  (His name has been changed).

There are five shower booths in the shelter. In the first one, water  constantly pours out.

Two others are in normal condition. In the fourth, the shower tap is not affixed to the wall. Staffers say it’s because only the disabled are bathed here. The fifth  shower stall serves as a storage space for cleaning supplies.

Hot water is only switched on by an employee and only during the set hours for bathing.

Staff psychologist Susanna Umutyan says it’s dangerous to leave gas boilers permanently switched on since "there are people with mental issues, people without arms or legs”.

Thus, if someone wants to bathe outside schedule, they must do it with cold water.

The Temporary Shelter is a Permanent Residence for Many

The shelter provides care to around 100 people.

Initially, the shelter was supposed to provide a roof to the homeless for three months, and assist in solving the issues that rendered them homeless in the first place. The shelter was to help with documentation and to ensure that residents were either return to their families or transfered to an appropriate facility if possible. 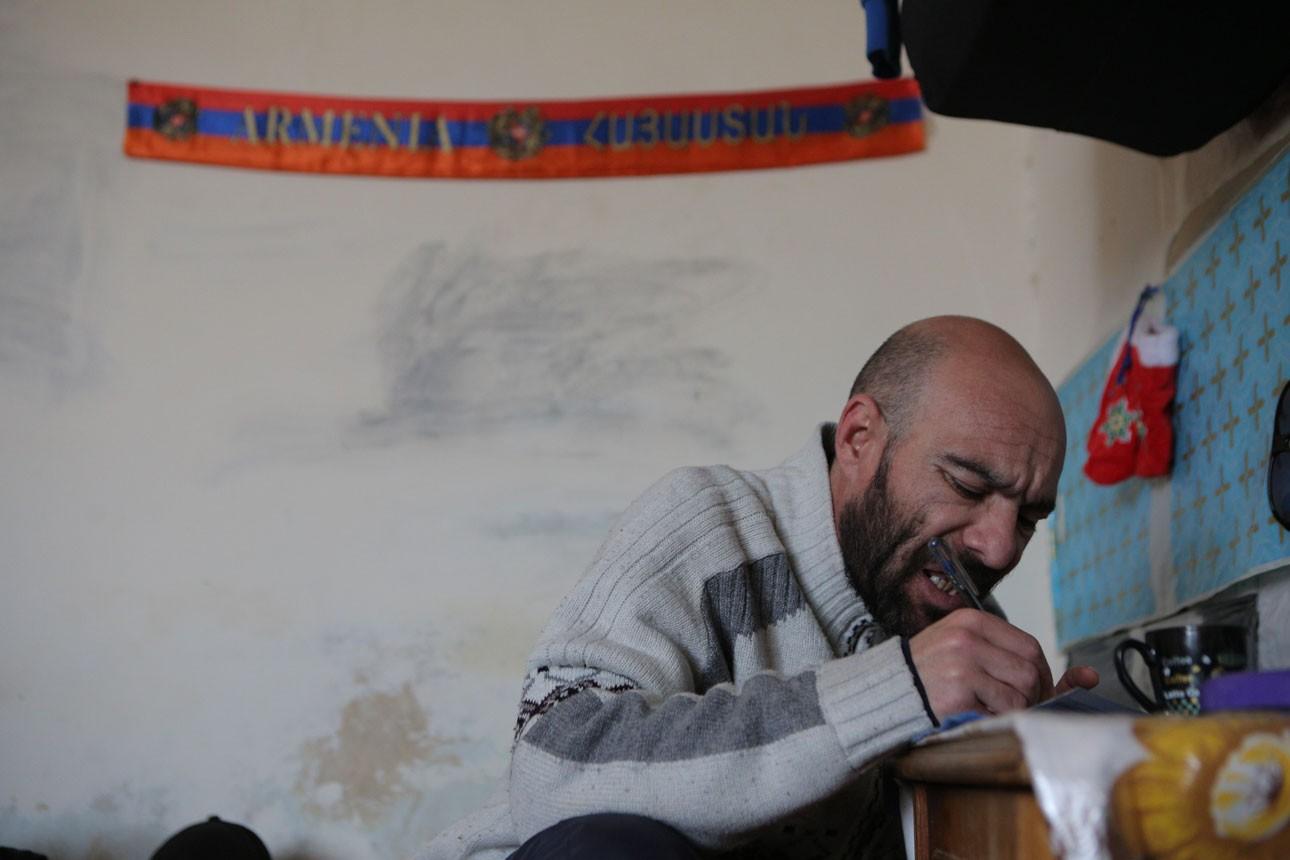 In other words, the shelter was tasked  with facilitating the reintegration of residents back into society.

Many residents, however, wind up in the shelter for the long-term.

There are homeless people living in the shelter for two or three years. There are even people who moved to the shelter since it   moved from Haghtanak village in 2014.

For years, the institution hasn’t solved their problems. In addition, there are people with disabilities and mental health issues. More than 30 people are 67 years or older, who could have been directed to a hospice or a nursing home instead.

Ten homeless people had died in the shelter every year since 2014.

Though the administration claims these residents pose no danger, Project Manager Hamlet Hovhannisyan confirms that there was a case of a suicide five years ago.

Other residents have told us about daily quarrels with people with mental health issues.

Loud shouting, replete with obscenities, affect the health of residents and cause unwelcome disturbances. 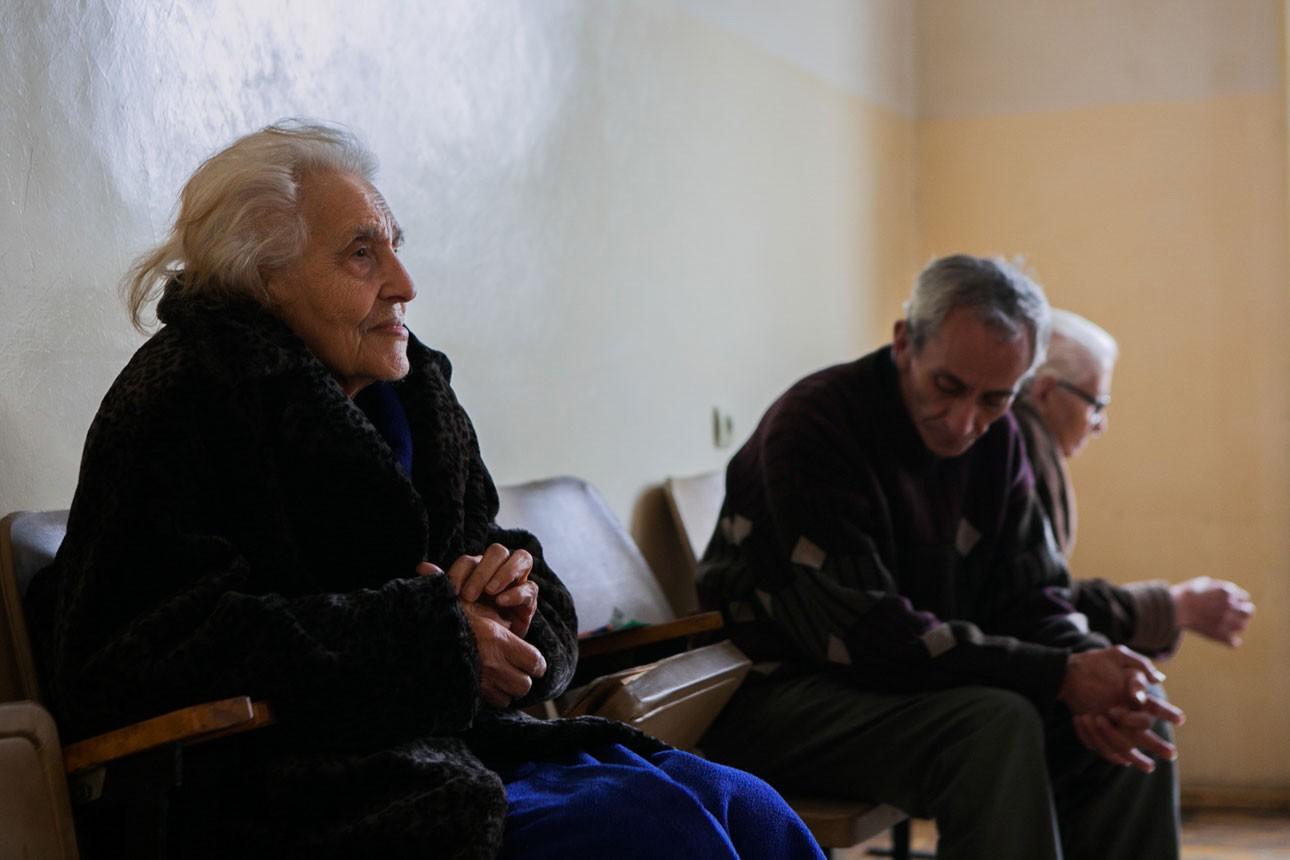 "This is not a psychiatric hospital, but a homeless shelter.  We’re also becoming mentally disturbed by listening to their screams, cursing and arguments every day," says resident Varuzhan (the name has been changed).

Kesoyan confirms there is a lack of openings in the institutions that serve the mentally ill in Armenia. If the Varashen shelter ejects mentally ill residents, they’ll wind upon the street.  He says the ministry plans to establish special housing for such people in the provinces.

Shavarsh Khachatryan wants to expand the shelter given the waiting list to get in. He says negotiations are underway with the Yerevan Municipality to allocate 50 places on the third floor, which is now unused, to house Yerevan’s homeless. 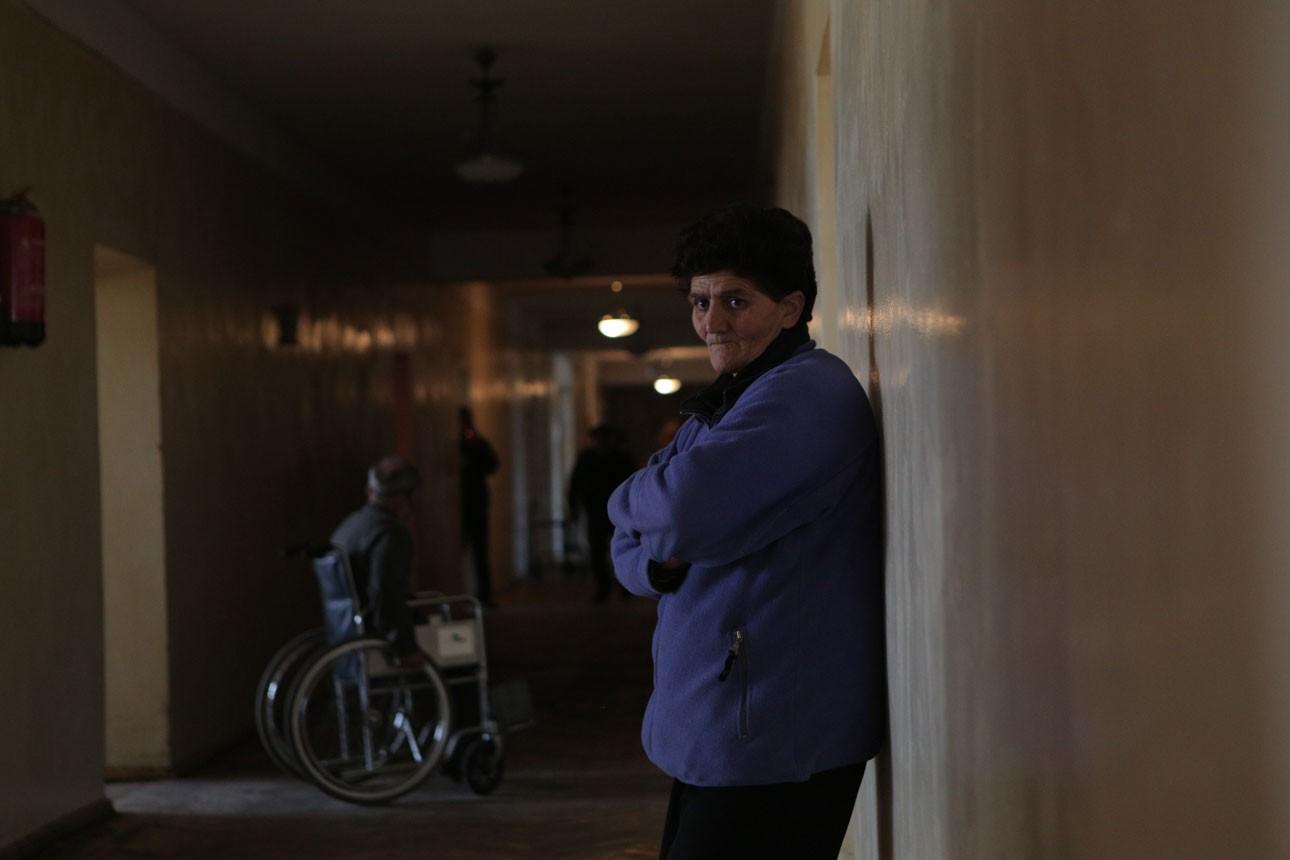 The shelter has already received some  furniture imported from Denmark.

The other idea is to create small shelters for homeless people in the provinces so that not all of them end up coming to Yerevan.

The shelter provides food to the residents in the morning and evening.

For lunch,  residents are expected to find work and feed themselves.

The kitchen is full of frozen and preserved food. Meat is never served here.

Instead, a large amount of frozen sausage is stored in the fridge. There is also pasta and cereals.

Shelter management says that the Ministry of Social Affairs has removed the meat from the diet given that only 760 AMD (less than 2 USD) per day is provided for every resident.

The shelter purchases the food itself, despite the fact that it’s mostly funded by the state. Director Khachatryan claims the shelter’s charter allows for purchases without competitive bidding by suppliers.

Every year, the shelter gets an average of AMD 56 million from the state budget.

Director Khachatryan says that the shelter also receives funding from the Danish Kofoed School, but that the Danish side is waiting for approval from the state budget to make a new transfer. 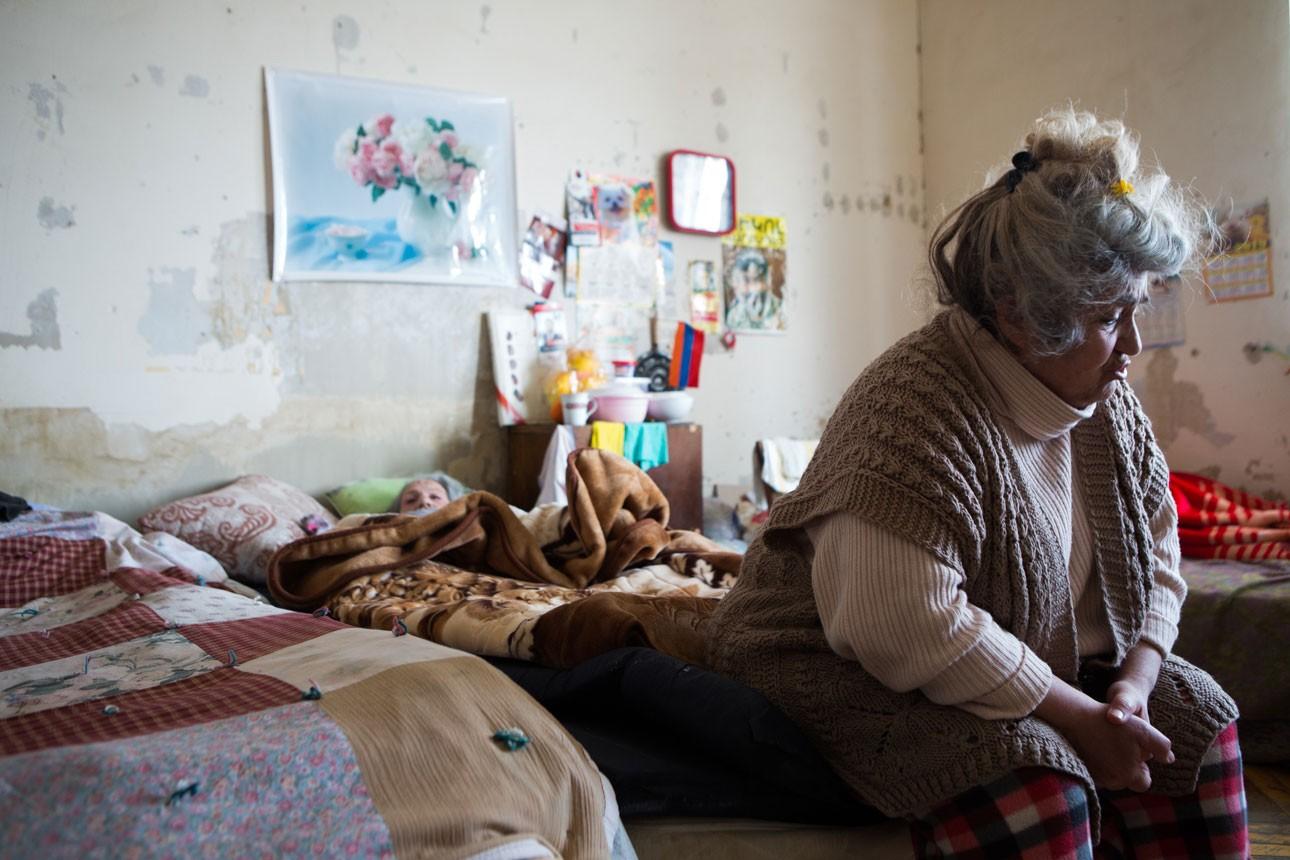 After examining the Fund's financial statements, it’s clear that the Danish side's contribution is symbolic.

For example, in 2017, it allocated 4.2 million drams to the Armenian fund. The 2018 report does not show any transfer from the Danish school.

The foundation has a yearly average of 28 employees, and the average salary is 160,000 drams.

The amount of salaries paid to the staff is 28 million drams per year. This is half of the state’s allocated financing.

The other half is spent on the shelter’s 100 residents.

Shelter staff haven’t received wages for the past two months, and their bank accounts have been frozen as a result. 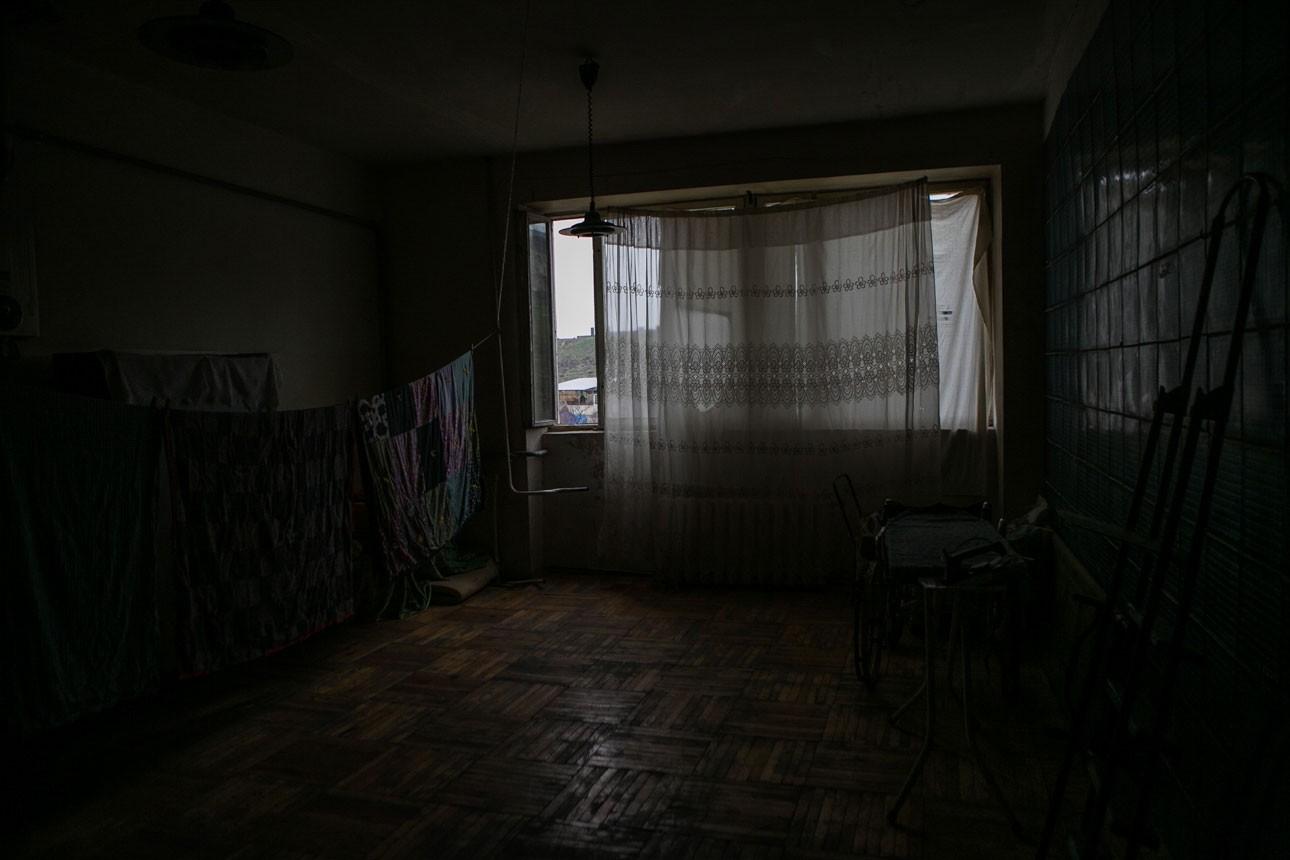 Our official visit ended in the administrative office, where we were invited to see some statistics. It was hot in the office. There was heating. "It’s an electric heater," staff members said.

We wrote the Ministry of Labor and Social Affairs, asking whether it has ever inspected the shelter.

Ministry Press Officer Sona Martirosyan replied that while they haven’t conducted inspections at the shelter, they have audited the books  of the Hans Christian Cofield Charity Foundation in 2014, 2016, and 2018. The results of the2018 haven’t been finalized.

Details of the  2016 audit results show that the shelter failed to:

In addition to these violations, the shelter failed to implement a requirement of a 2004 ministry order stating that each resident should be provided with a separate bed, a small shelf, and that each bedroom have a wardrobe (one for each of the four persons in the room). 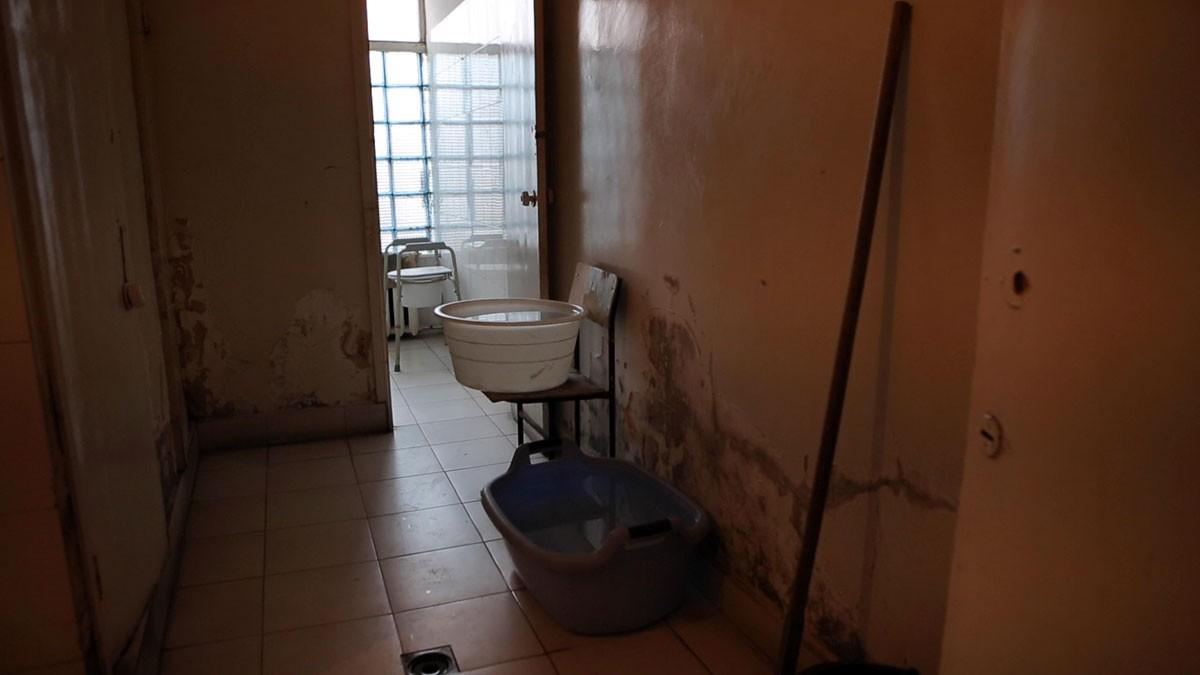 The audit found that the bedrooms were not equipped with small shelves and wardrobes.

Washing machine capacity was lacking, and  the number of toilets and showers failed to meet regulatory standards.

The foundation lacked required internal disciplinary or coordination rules, approved by the director of the fund.

A number of other points have also been violated, such as  proper document filling, the admitting and discharging of residents, required medical examinations , and quarantining residents when needed. 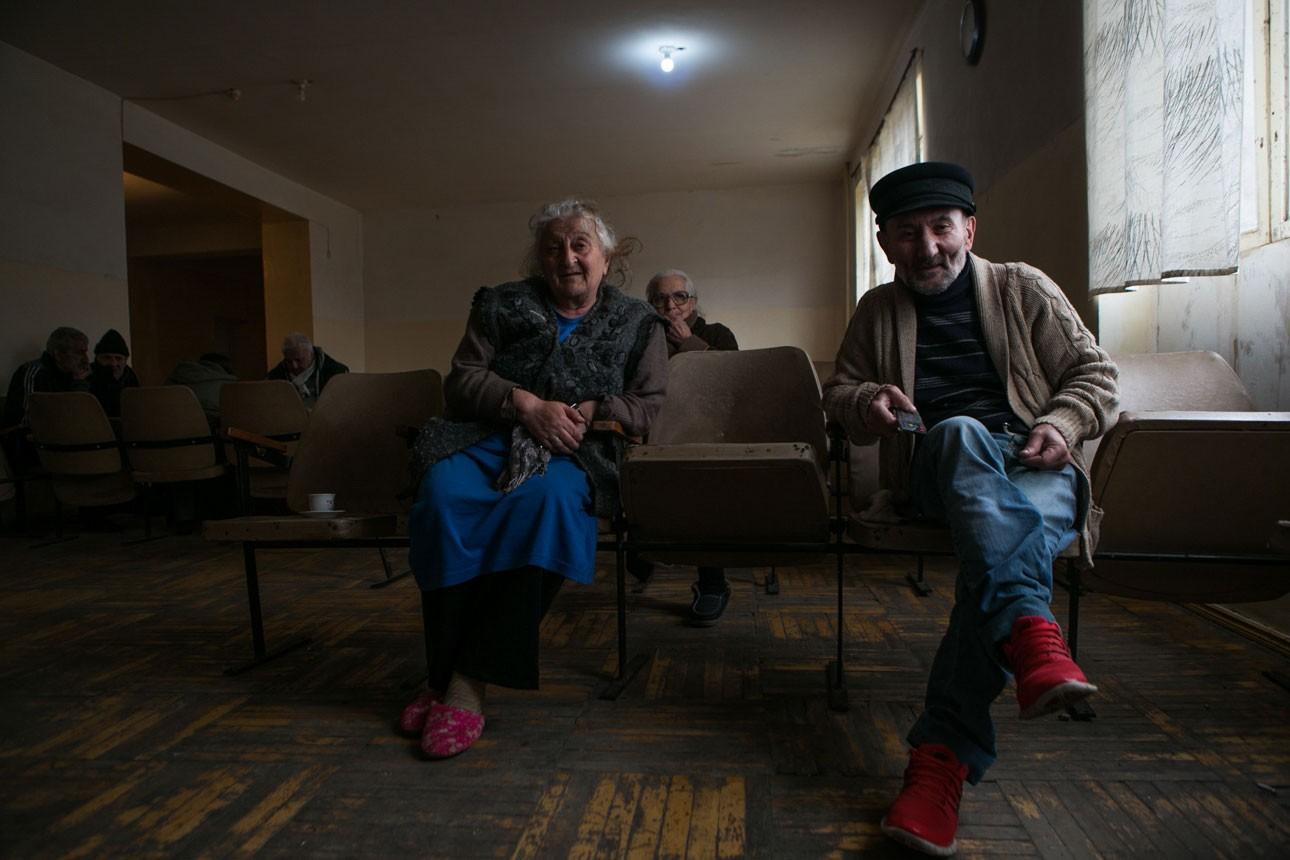 Our visits to the shelter show that most of these violations have not yet been eliminated.

Moreover, by examining the model of the Kofoed School in Denmark and its social network publications, we can conclude that the Vardashen shelter has practically no connection at all to the Danish-Armenian Hans Christian Kofoed Charitable Foundation, which has failed to implement the Danish model and the principles of self-help, social security and employment.

The shelter seems intent on “holding” people within its walls to fill some imaginary quota justifying its existence and continuing state financing. Meanwhile, dozens of homeless people remain on the streets.

P.S. The Electric Networks of Armenia (ENA) has threatened to cut power to the shelter given it owes 800,000 drams in unpaid utility bills. Shelter management and the ministry are trying to hammer out a deal whereby the ENA delays the cut-off until the funding issue is resolved.