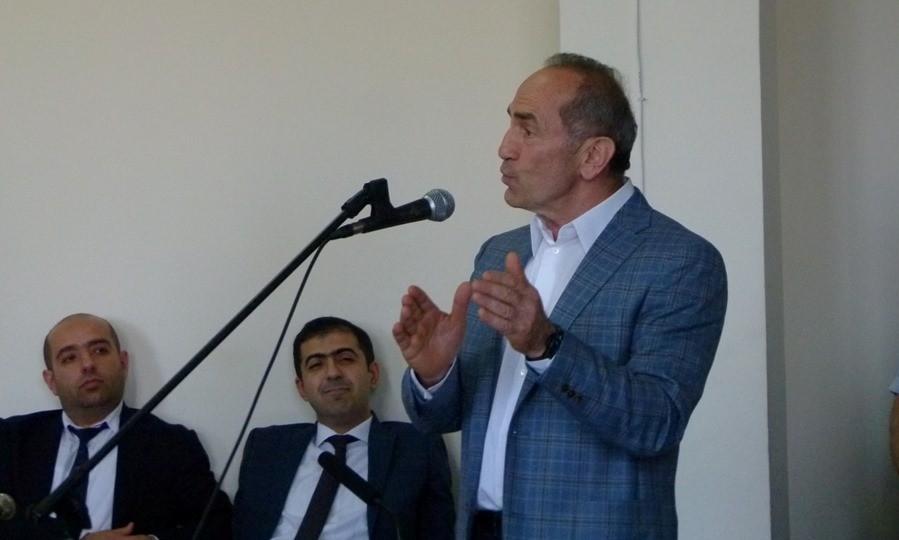 At his detainment hearing on May 16, former Armenian President Robert Kocharyan gave his take on the political unrest that shook Yerevan following the contested February 2008 presidential election.

Kocharyan, who has been charged with usurping state power and bribe taking, said that supporters of presidential candidate Levon Ter-Petrosyan, who received 21.5% of the vote, were staging daily protests in Yerevan.

The former president said that the criminal case against him is all about the chain of events that took place between February 23 and March 2, 2008.

Kocharyan, in his testimony at court, said that at a February 21, 2008 rally Petrosyan told his supporters that he had met with the deputy defense ministers and they had told him that they were joining the protesters.

Kocharyan said he was forced to return from Moscow on February 22 to deal with the situation.

“At the airport, members of the Security Council filled me in on the situation for some 15-20 minutes. The following day, I expressed a wish to meet with the command staff, at the presidential palace. Imagine, if you will, a situation where I, as the president am the guarantor of the constitution, and receive news that top military brass is being pulled into politics. What must a supreme commander and president do? Naturally, he must meet with the command staff and warn them such a thing is unacceptable and could lead to Armenia’s destruction. The meeting lasted for twenty minutes, no more. There was no discussion. It was a one-sided communication. I simply gave my observation and left.”

Kocharyan said that, at the time, he realized that Ter-Petrosyan had no intention of admitting defeat. “Even before the elections, he declared that if he lost it meant that the vote was rigged,” said Kocharyan.

“I faced one problem. Not to let an unelected person become president,” Kocharyan said in court.

Regarding the order to mobilize army troops to Yerevan to deal with the protests, Kocharyan said he only became aware of the decision’s contents during his trial.

“After learning about it, I’m convinced it was a very correct and timely order. Because of this order, we succeeded in avoiding possible negative outcomes. The order contained no illegal points and was fully within the purview of the defense minister. This is my opinion. But, as to the specifics of its acceptance and what was done, that’s not my job,” Kocharyan said.

Kocharyan said that Gorik Hakobyan, the head of the National Security Service (NSS) at the time, had circulated a letter to the police chief, informing him that some citizens were armed.

“There’s not a police chief who wouldn’t take steps after receiving such a letter,” he said, adding that on the morning of March 1, 2008 the police uncovered arms and ammunition at the protesters’ tent camp in Liberty Square.

On the morning on March 1, a large police force moved in and dispersed protesters who had set up tents in Yerevan’s Liberty Square. Many claim the police planted the guns and other weapons to justify the measure.

“That morning, I tried to understand what had happened. Later, the NSS told me about the gasoline and bottles, etc. Nikol Pashinyan started calling for barricades. They overturned some vehicles. They told me it might end badly, that it was necessary to draft an order and sign it if needed. I instructed the chief of staff to do. The parties prepared the text between 7 and 10. Everything was done legally. I coordinated everything with the national assembly and the prime minister.”