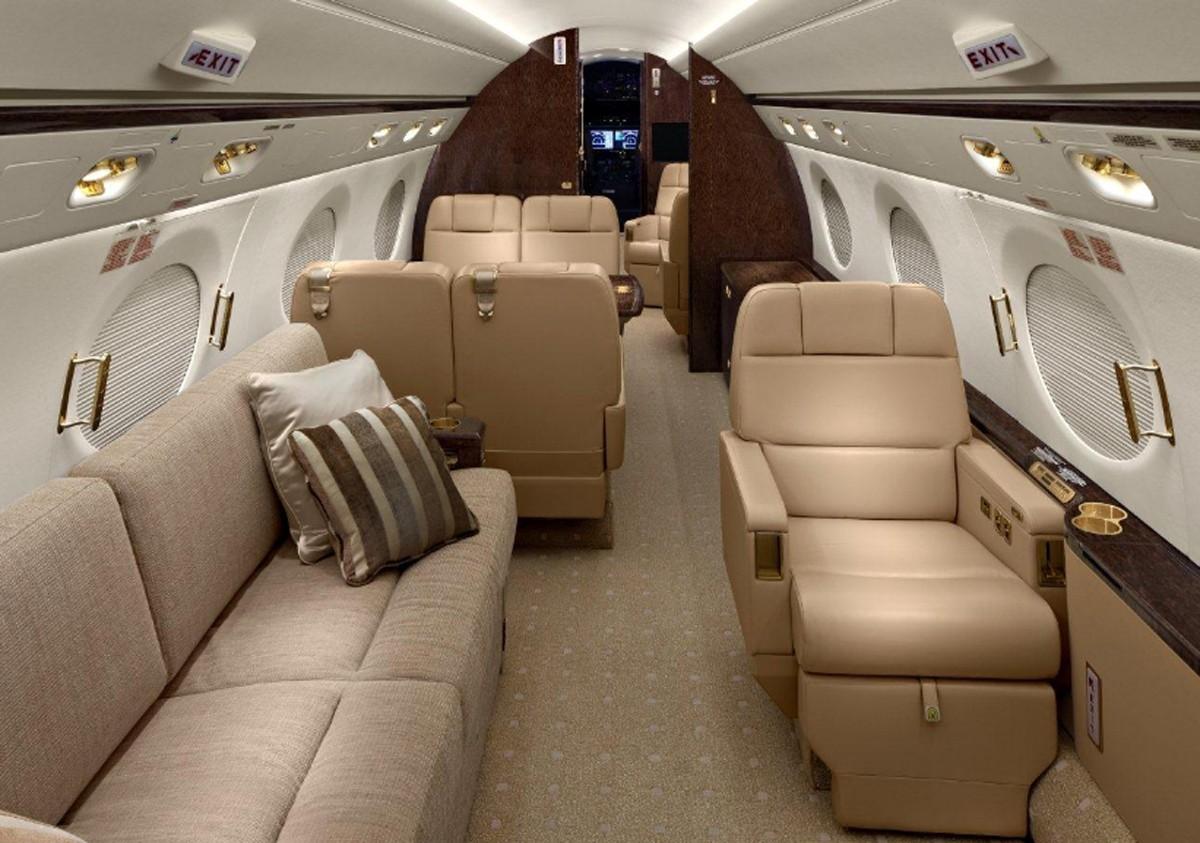 Hetq has uncovered the name of the owner of the plane used by Armenian Prime Minister Nikol Pashinyan and his entourage on their recent trip to the United States and back.

It appears that the private business class jet leased by Pashinyan belongs to Ukrainian politician Nestor Shufrych, who had dealings with Paul Manafort, a former U.S. political consultant and lobbyist convicted of tax and bank fraud in 2018. Manafort joined Donald Trump’s presidential campaign team in March 2016.

Pashinyan left the country on September 21 after participating in the events dedicated to the 28th anniversary of Armenia's independence in Gyumri.

The business class American "Gulfstream G550" plane arrived in Gyumri’s Shirak Airport from Kyiv on the same day, to take Pashinyan to the USA.

The plane, with Pashinyan's entourage aboard, first touched down in Ireland’s Shannon Airport for refueling and then left for Van Nuys Airport in Los Angeles, where it arrived on the evening of September 21, local time. 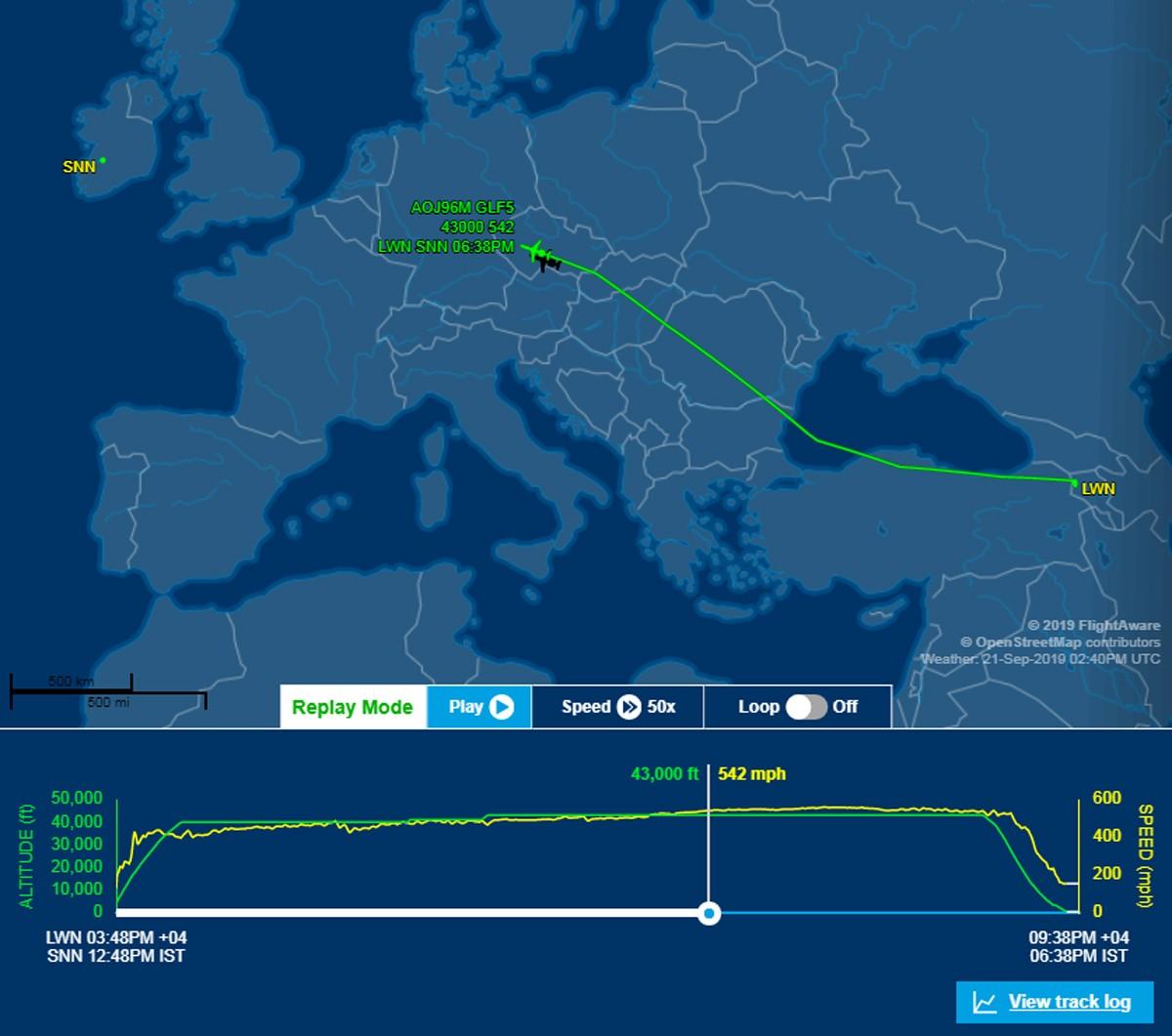 As widely reported in the Armenian and foreign press, Pashinyan had several meetings with local authorities and the Los Angeles Armenian community.

On September 23, Pashinyan's plane departed for Silicon Valley, San Jose, and in the evening on the same day, New York, touching down at Teterboro Airport in New Jersey. After a series of meetings at the UN and addressing the General Assembly, Pashinyan returned from Teterboro to Yerevan’s Zvartnots Airport, touching down in the evening of September 26. The Gulfstream G550 returned to Kiev from Yerevan the following morning.

After it became clear that Pashinyan had left for the United States not on a government plane, but on a leased private jet, a rather expensive pleasure (the press wrote that the rental cost was $ 300-400 thousand), Pashinyan’s spokesman Vladimir Karapetyan posted the following on his Facebook page September on September 23.

“Prime Minister Nikol Pashinyan's working visit to the United States was carried out by charter flight through a private company. In general, the sum allocated for the visit can reach up to 165 million drams (about US$350,000), and the purpose of organizing the charter flight depends on several circumstances. The Prime Minister's agenda in the United States is very extensive. Nikol Pashinyan's visit to Los Angeles has been under preparation for a long time, where the head of government has had more than a dozen meetings and events in a day, about which the public was given proper information.

“From there, the Prime Minister will travel to San Jose, the Silicon Valley, with a busy agenda, and again, in just a few hours, will hold a series of meetings and negotiations with leading high-tech companies. The Prime Minister will then leave for New York, engaging in the work of the UN General Assembly. Nikol Pashinyan will have more than a dozen meetings and events at the UN headquarters. At the same time, I would like to inform you that the Singapore Prime Minister's official visit to Armenia is scheduled for September 28, and the Prime Minister has a problem about arriving in Yerevan before that. Without a special flight, the Prime Minister's important working visit to the United States with such a busy schedule and short deadlines would not be possible, especially given that the Prime Minister could not attend the September 21 events in Armenia, including the Hero of Our Times award ceremony. From now on, such adjustments will be made in such a way as to facilitate the more effective organization of the President's visit.”

Putting aside the discussion of the amount of money spent, as well as leasing a private business class aircraft instead of using a government plane, let's look at the operator and owner of this aircraft. They have been paid millions by Armenian taxpayers.

Today, there are many airlines offering charter flights in business class worldwide.

In this instance, Nikol Pashinyan's staff leased the plane from the Austrian company Avcon Jet AG, headquartered in Vienna. (It has ten branch offices in Europe, Asia and Africa.) The company offers a variety of planes to potential customers, including Cessna, Bombardier, Gulfstream.

As mentioned above, Pashinyan and his entourage was provided with a Gulfstream G550 model aircraft.

According to the Austrian Aircraft Register, there are seven G550s in the Avcon Jet fleet. But there are two listed on the airline's official website. One (registration number: OE-ICQ) is based in Vienna International Airport, the other (OE-ISN) is based in Kyiv International Airport (also known as Zhuliany). Perhaps it was because of the shorter distance to Armenia that the Kiev-based aircraft, designed for 19 people (the other accomodates 18), was chosen. 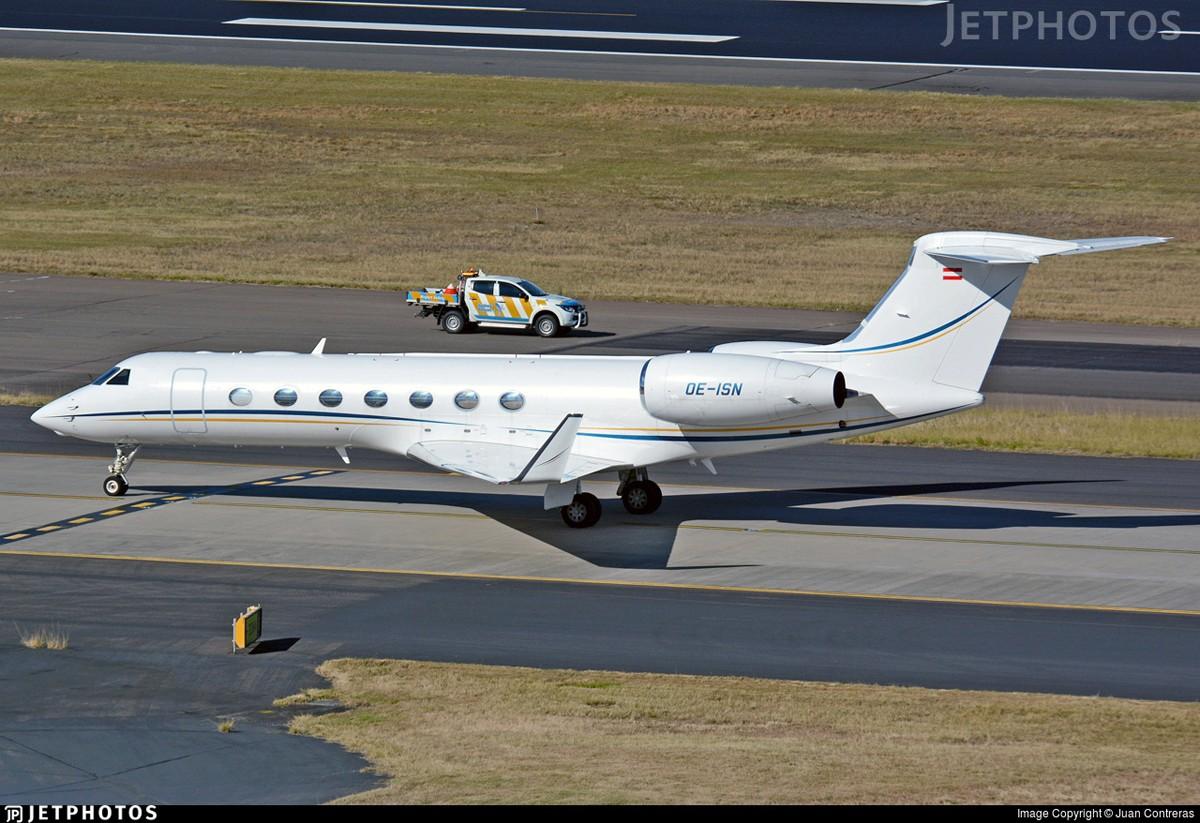 According to aviation reports, the first operator of the aircraft was the Austrian company Jetalliance, which ceased operations in 2013. Afterwards, Avcon Jet, a well-known business aviation company, became the operator of the OE-ISN.

Founded in 2007, the company’s owners include Managing Director Alexander Vagacs and CEO Maximilian Maruna. The main owner is Chairman of the Board of Directors, Austrian lawyer Roman Schweitzer.

Knowing the owners of the company isn’t the most important point for the purposes of this article. Avcon Jet is merely an aircraft operator.

It is well-known that such companies not only use their own aircraft, but also manage and operate planes owned by the rich and famous, assorted oligarchs, officials, and large companies.

Addressing such owners, Avcon Jet states on its website: “Your private jet – our business. In keeping with this philosophy, our experts look after your aircraft with utmost diligence: all technical, operational, legal and financial aspects are managed at the highest possible standards – and to your absolute satisfaction. We ensure that your private jet will always be maintained immaculately, giving it all the attention and service it needs. At the same time we can help you reduce the cost of ownership with solutions tailored to your needs. Offering your aircraft as part of our charter fleet will ensure a financial return. Of course we’ll take care of that too.”

Since the planes featured on the Avcon Jet website are based in Austria, Germany, Italy, Great Britain and Portugal, and only the OE-ISN is based in Eastern Europe, there is little doubt that its owner is from Ukraine.

It's no secret that wealthy people from various countries, including Russian and Ukrainian oligarchs, often register their aircraft and helicopters in other countries (some of which can be read here). For them, the “paradise” for aircraft registration are the offshore zones: the Caribbean, Aruba, Bermuda, Malta, Isle of Man, Luxembourg and Austria.

One of the best ways to identify business class aircraft owners is to pay attention to the registration of the aircraft. It is known that wealthy people have a "weakness" in registering aircraft with their first and last names. For example, in the registration of Samvel Karapetyan's plane 9H is the national mark of Malta, and SSK is decoded as Samvel Sargis(ovich) Karapetyan. 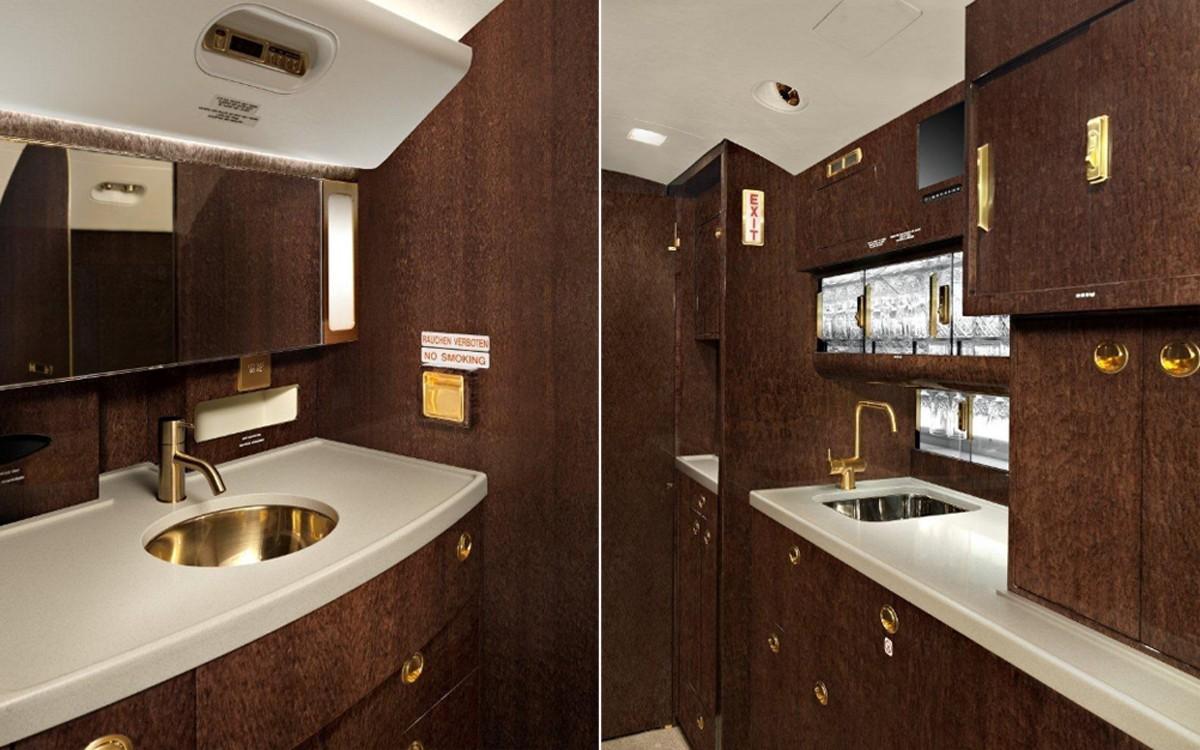 The lavatory and kitchen of the plane

In the case of the OE-ISN registration plane used by Pashinyan, the OE is the Austrian national mark and the ISN is logically the initials of the owner's name. (The registration and the name of the owner do not always correspond).

Searching the internet, we found out that the ISN is really the G550's owner's surname. We are talking about the Ukrainian politician Nestor Ivanovych Shufrych. 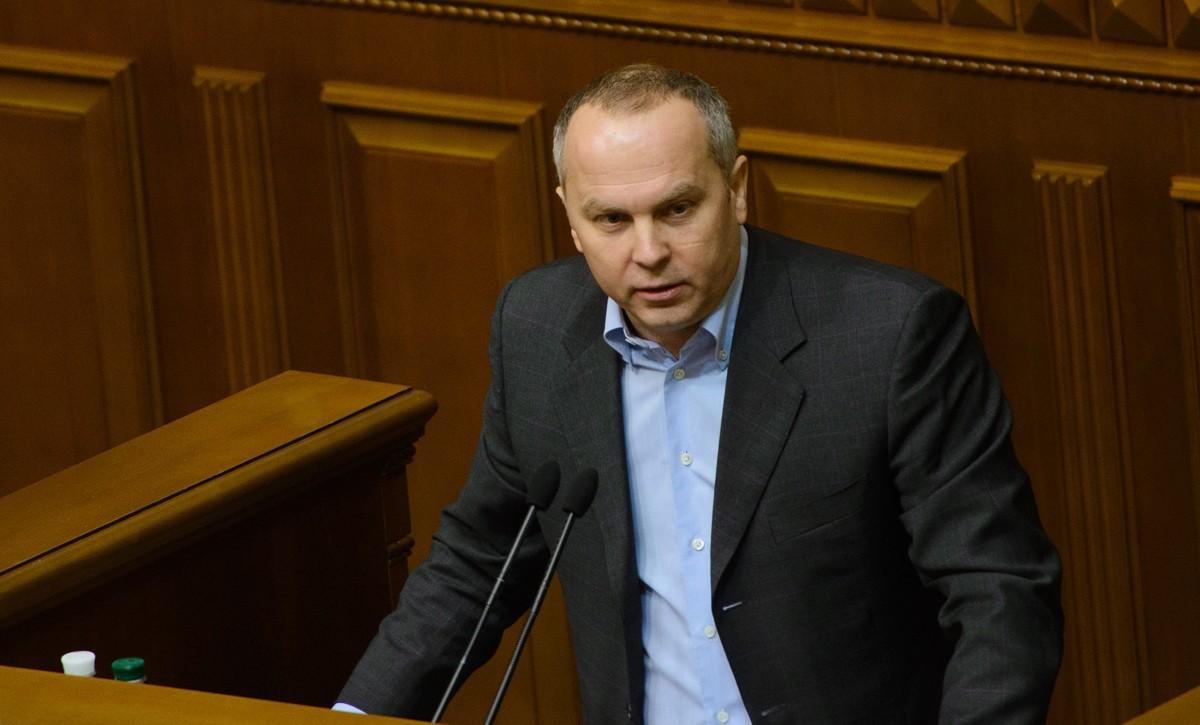 He was reportedly involved in the supply of fuel oil and coal to power plants in western Ukraine, as well as in the export business of building materials. 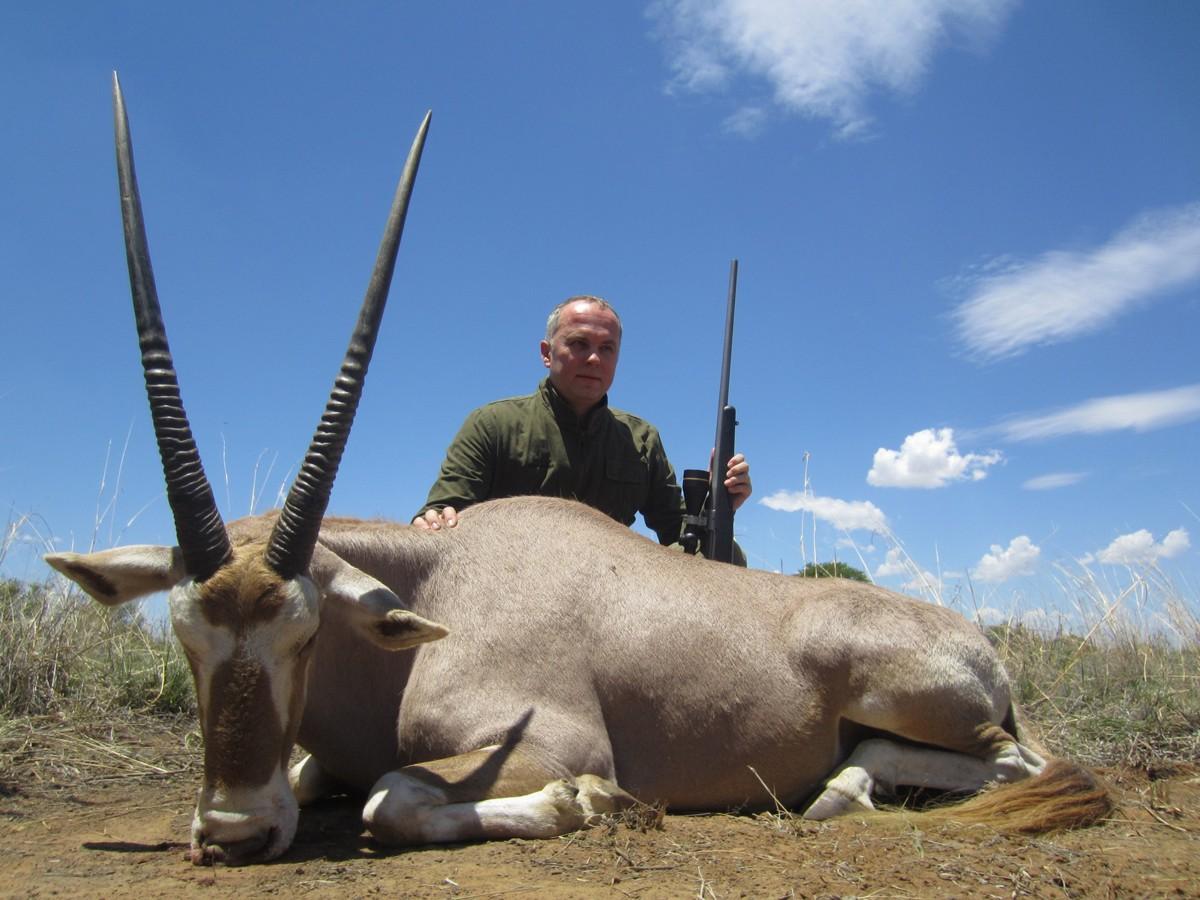 In 1998, Shufrych was first elected a member of the Supreme Council (Rada) of Ukraine from the Social Democratic Party of Ukraine (SDPU). He served as an MP until 2006. During the 2004-2005 presidential elections and the Orange Revolution, he defended then-Prime Minister Viktor Yanukovych, who eventually lost to opposition leader Viktor Yushchenko.

Shufrych served as Ukraine's Minister of Emergency Situations from 2006-2007 in the cabinet of Yanukovych, who was appointed prime minister by Yushchenko. He was later elected a deputy of the Supreme Rada from Yanukovych's Party of Regions, which he had become a member of after leaving the SDPU. In 2010, when Yanukovych was elected president, Shufrych again became Minister of Emergency Situations in Prime Minister Nikolay Azarov's cabinet but served only four months. In 2012-2014 Shufrych was an MP again. 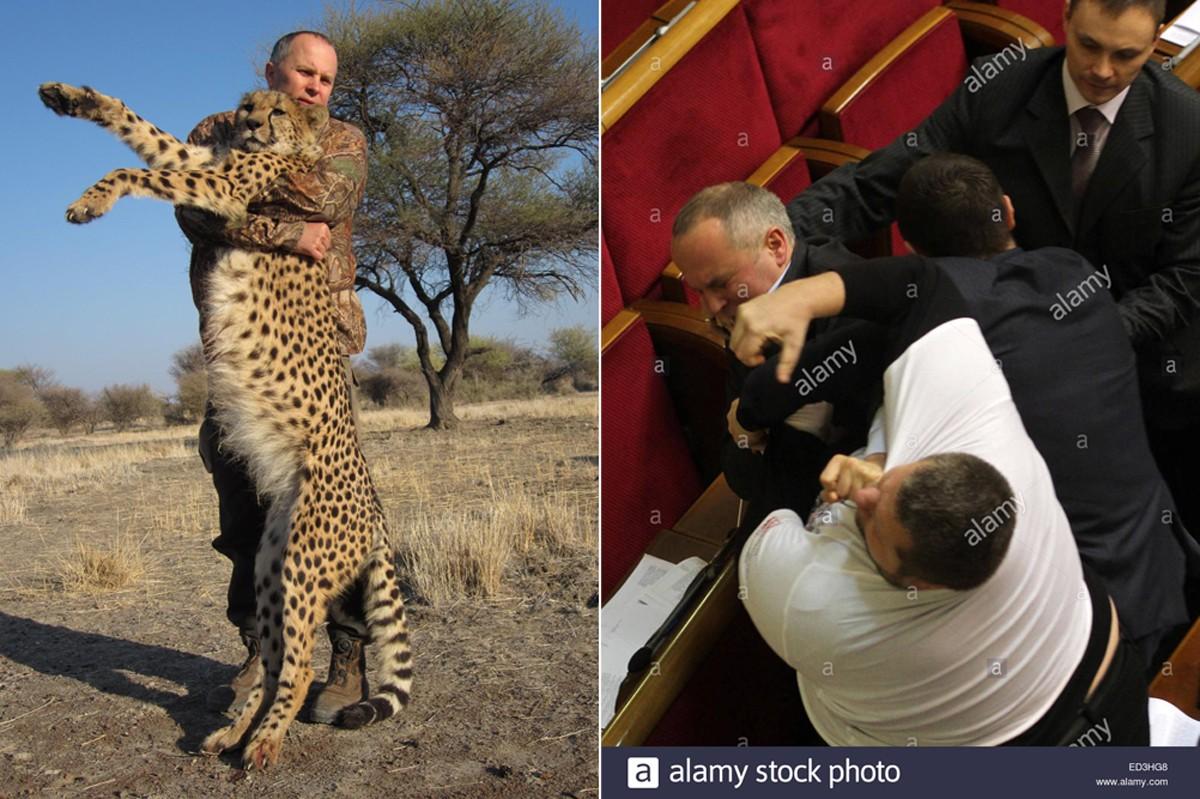 Shufrych kills a cheetah and brawls in the Ukrainian parliament

In 2014, after Yanukovych's ouster, Shufrych left the Party of Regions (which had decided not to run in early parliamentary elections) and was re-elected as a member of the Opposition Bloc (re-elected in the 2019 elections).

Shufrych later admitted that the Opposition Bloc had paid about $1 million to American political consultant, and later convicted felon, Paul Manafort to help them get into parliament.

“The investment in Manafort paid off. He’s a genius,” Shufrych said at the time. Paul Manafort has long lobbied for the interests of Viktor Yanukovych in Ukraine, and previously served on the election teams for U.S. Presidents Ford, Reagan, Bush senior, and Trump.

As for the OE-ISN, aviapages.com states that its lease requires the approval of the owner, which, if true, means that Nestor Shufrych had been informed in advance and had agreed to rent his aircraft to Armenian Prime Minister Nikol Pashinyan.

Lilo 2019-10-09 03:13:37
@preston Would you please give us some examples of that “most corrupt “ behavior? Maybe mansions in California or penthouses in London that we are not aware of? As for what he has done. Well, he has done a lot but the fact that he managed to stabilize Armenia’s surging public debt and avoid a default in a few years is enough for him to be proud.
Preston Bagrationi 2019-10-06 20:41:57
That OK, he saved Armenia from oligarchs...ehhem, yet he himself has become one of the most corrupt, vengeful person in Armenia. Already people on the streets are calling him a liar, for doing absolutely NOTHING for the last year plus he has been in office, but take REVENGE on the former regime officials. Let us see how long he will be able to fool the people. Eventually he will be chased out of Armenia and into a cell in Moscow Russia.
Garabed Missaelian 2019-10-04 12:05:26
And the point is?
Արման 2019-10-04 02:46:49
Հետաքրքիրա որ պետական A319 CJ 1998թ․ -ի կարող է անցնել շուրջ 11 650 կմ(wikipedia,և airbus-ի տվյալների) իսկ Gulfstream G650 12 960 տարբերությունը 1310 կմ է որը բան չի փոխում և Gulfstream-ը ստիպված պետք է Լոնդոնում կանգներ լիցքավորման։Կառավարական ինքնաթիռնել կարող էր դա Լոնդոնում լիցքավորվելով հասնել Լոս Անջելես։Իսկ ինչու չեն օգտագործել ինքնաթիռը հնարավոր է ինքնաթիռի նորոգման գումարները վատնվել են և ինքնաթիռը չի նորոգվել ինչի պատճառով այն չէր կարող իրականացնել մեծ շառավղով թռիչք։Ինքնաթիռ վերանորոգելը և սպասարկելը թանկ հաճույք է և հնարավոր է որ մի կազմակերպություն վատնելով Յուրացնում է "Բորտ 1"-ի վերանորոգման գումարը։
Վախթանգ Սիրադեղյան 2019-10-03 18:34:22
Իսկապես, հետաքննության ՕԳԳ-ն ավելի բարձր կլիներ, եթե համեմատվեր թիվ 1 «բորտով» և վարձակալվածով թռիչքների ծախսերի տարբերությունը:
Paruyr 2019-10-03 16:39:26
The explanation by his spokesman fully makes sense. Hetq & co. are just not happy with Pashinyan's stance on mining and thus try to make a fuss out of stuff like these. Do you expect the PM of a country to take regular economy class flights from one state/destination to the other where he has scheduled meetings? Oh and the A319 Airbus owned by the Armenian gov't can't make it to the USA because it doesn't have the fuel range capacity to cross the Atlantic Ocean.
Lilo 2019-10-03 08:20:41
Looks to me, after the revolution hetq journalists are desperately looking for some story to stay relevant. You don’t really expect the pm to fly economy class? The jet and its pictures show no luxury. It looks very normal. The Airbus owned by the Armenian government is far larger and probably more comfortable. The reason for renting this and not flying the Airbus is just technical. And who cares who is the owner? Most private jets are available for rent through different companies. And one more thing, flying the Armenian Airbus is not cheap either. Just because you own it doesn’t mean you don’t spend on fuel and maintenance.
Arthur 2019-10-03 07:30:31
Good research, but it was purely business transaction as the owner of the aircraft was happy that his aircraft got leased through the Austrian company and was not sitting idle in Kiev airport.