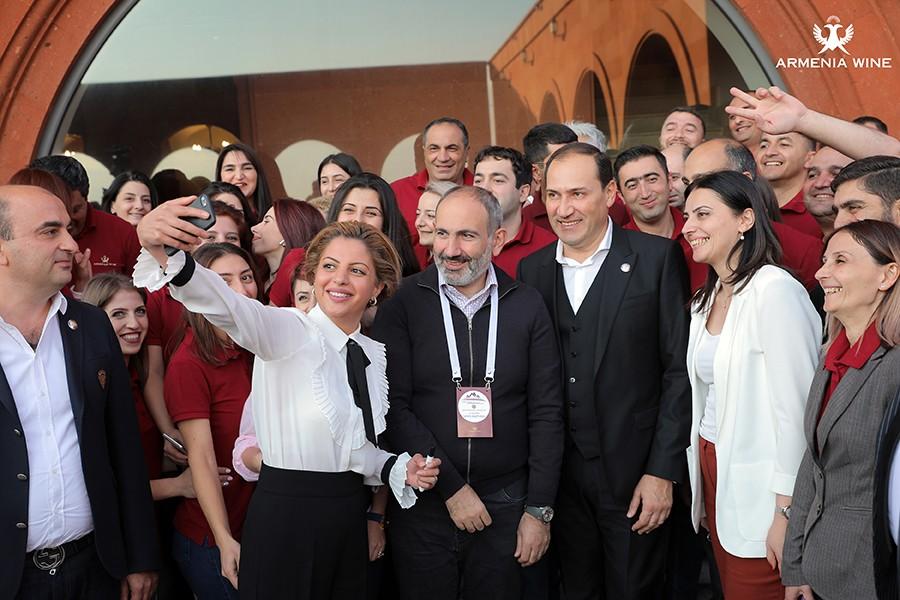 This is an unedited Armenian Wine Company press release.

On October 12, 2019 the Armenia Wine Company hosted the "My Step for Aragatsotn Marz" business forum with Prime Minister Nikol Pashinyan, members of the government, National Assembly deputies, dignitaries and entrepreneurs participating in the event.

The forum was held under the auspices of the Armenia Wine Company.

At the start of the event, Prime Minister Nikol Pashinyan delivered a speech, focusing on the state of the country's economy and the recorded results. The prime minister said it was symbolic that the forum was being held in the wine aging cellar of the company and expressed hope that creative thoughts and ideas would be voiced in this 'academic' environment.

The co-founder of Armenia Wine Company Vahagn Mkrtchyan presented the rich winemaking culture of the Aragatsotn region and the steps made by the company to boost the local winemaking industry. He spoke also about what the winery has achieved in recent years and the efforts of the company to ensure the competitiveness of Armenian wines in the international market.

“When we entered the Armenian winemaking industry 13 years ago, it was going through difficult days. We did not hesitate and stated that we should create such  wines that would compete with the best world brands. We believed in that idea and set the bar that high. That  meant that serious investments were  needed, international experience was to be brought to Armenia, and in this regard we did not make any compromise and invested the best international experience in Armenia Wine," said Vahagn Mkrtchyan.

According to him, top-class international consultants were attracted by the company and the team was replenished with young staff. He noted that the traditional winemaking culture, on which the company focuses on, has played an important role in the success of Armenian Wine Company.

In tune with the international winemaking trends, in 2017 Armenia Wine Company launched the process of planting organic vineyards having so far planted vines on 18 hectares of land out of the projected 100 hectares.

"Organic winemaking means respect for nature. We do not use any pesticides, the vineyards are sprayed exclusively with organic substances, for which we use modern technology. A drip irrigation system, anti-hail nets are also needed, and we were able to implement the first stage of the program," said Vahagn Mkrtchyan.

The company keeps on contributing to the development of tourism in the region through the implementation of wine tours. Last year, the plant was visited by about 5,000 tourists.

“An ethnographic tourist center and a church will be built on the territory near the plant. To do this, we have chosen the architecture of the 18th century, which is  inherent in the region. The building will have a celebration hall with 300 seats, a patio for outdoor events, two winemaking houses and cognac-maker, each of which will be furnished accordingly, and a land plot for workshops too ," said the co-founder of the company.

After round -table discussions in the  government-entrepreneurs format at the business forum Prime Minister Nikol Pashinyan made a tour around the Armenia Wine's winery and was told about the company's activity and winemaking traditions.

The prime minister observed the entire wine making cycle, starting from the stage of unloading and sorting grapes, then tasted new wines of the company, which would soon be presented to the consumers.