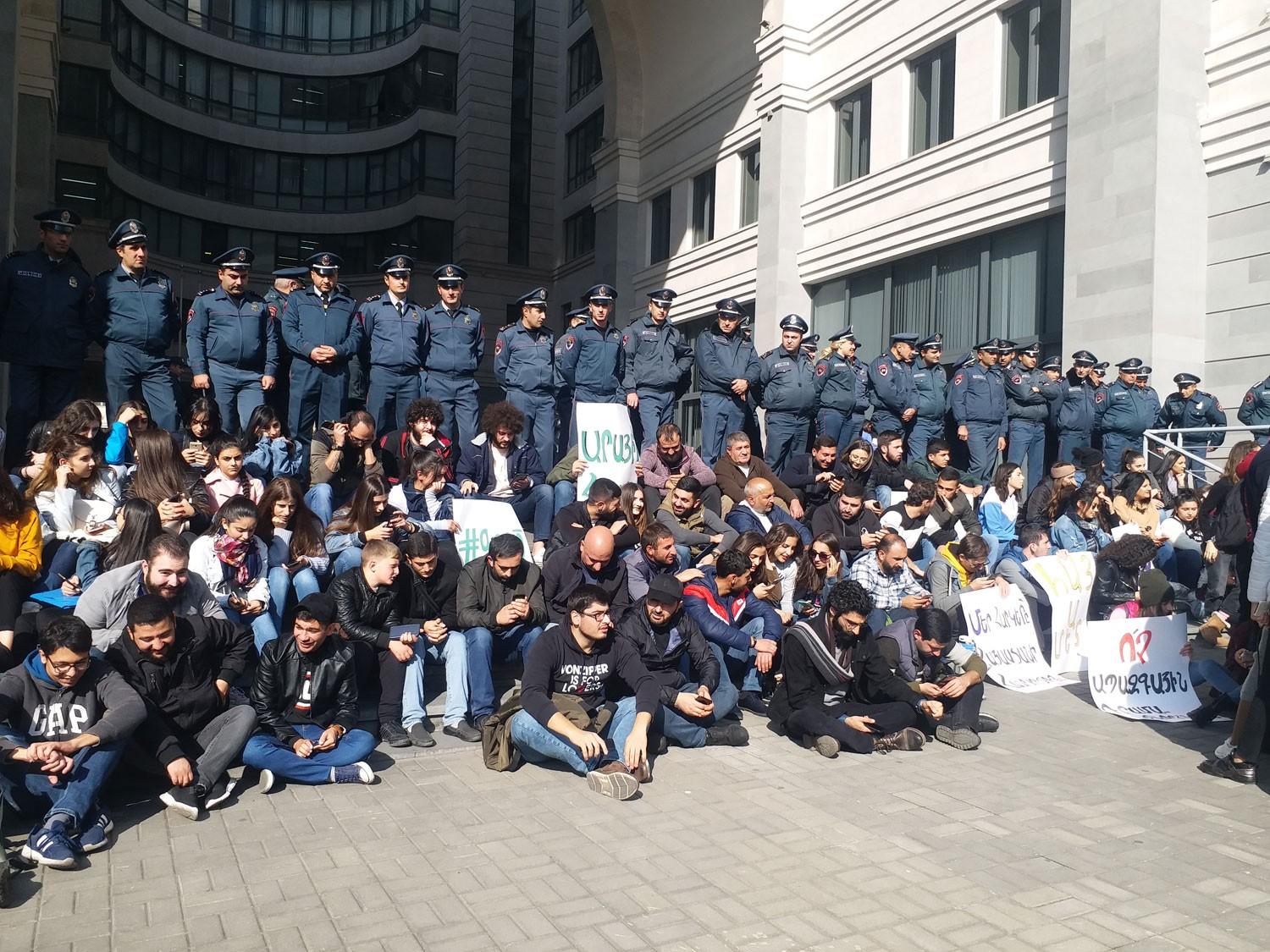 A group of some 100 people unhappy with the performance of Armenian Minister of Education, Science, Culture and Sport Arayik Harutyunyan staged a sit-down demonstration outside the ministry building in Yerevan demanding his resignation.

The demonstrators include members ARF youth wing, and students and lecturers from different universities in Armenia.

They are incensed that the ministry funded a film called Mel, arguing that the film is not about a weightlifter, but about transgender identity.

A documentary, the film is about Mel Daluzyan, a famed transgender Armenian weightlifter.

The demonstrators also voiced displeasure that the ministry spent AMD 2.7 million (US$5,650) for the November 2 performance, in Yerevan, of an experimental play called “Emotions and the Bell”

A group opposing the play, arguing it promoted unpatriotic and non-traditional sexual behavior, sought to disrupt it. One young protester threw green dye at one of the performers.

A video of the performance caused an uproar on social media, with some accusing the play of promoting satanism.

The demonstrators are also incensed that the ministry recently decided to make Armenian language and Armenian history classes at university programs non-obligatory.

Leaving a cabinet session meeting, Minster Harutyunyan told reporters that he has no intention of resigning and would only do so if he felt he wasn’t executing his responsibilities effectively.

Boghos 2019-11-10 15:23:18
@ Christopher Atamian "I actually do not think that these protesters represent the average Armenian view" well you are deeply wrong. Homophobia is deeply anchored in Armenian society and concern more than 80 % of the population, women, young. old, church, pagans, atheists, educated or not, diaspora or hayastancis altogether. But to realise that, one need to be in touch with the society in its entirety. I personally think that a governmental implication in promoting the LGBT rights is the worse thing that could happen. The issue is too sensitive and delicate to be politicised by both sides, the "holier than thou" self proclaimed elite on one side, and the "ignorant neanderthals" mass on the other. This way of despising the overwhelming majority of Armenian society will definitely not help the LGBT movement to achieve its goals. Governmental financing of pro LGBT art is just a posture aimed to international audience and will only create a profound gap between the rulers and the society, the later being convinced that the former try to rule the way they live. Finally, Im tired of people pretending not to understand that 6000 USD of public money for 30 mins finger- salad dance you called "perfectly fun and dadaesque artistic performance" is a plain and simple robbery. I find the waste of public money scandalous, while Im sympathetic to the cause. One thing only will sensibilise the Armenian society to the LGBT issues : COMING OUTS. Coming outs for god sake, not movies or obscure and artistically laughable street art performance.
Christopher Atamian 2019-11-08 05:19:13
Ignorant, foolish, homophobic neanderthals like these people exist everywhere. We still have people in the South of the USA that us the "n" word in public. Good for Haratunyan for standing up for human rights and intelligence. It makes me want to fly to Yerevan and hold counter demonstrations. Although there is a virulent strand of homophobia in armenian society--propagated in part by not solely by the Church and Christianity--I actually do not think that these protesters represent the average Armenian view--in Armenia or in the Diaspora. Let's put Mel aside a moment since that brings up intolerably scary thoughts for people like these demonstrators--i.e. that some people are different from them,that gender is fluid, that same-sex encounters and unions are perfectly natural and enjoyable. WHAT COULD POSSIBLY THREATEN THEM about a perfectly fun and silly Dadesque street art performance? Did th Earth open and the heavens rent when those six Armenians went around amMetro station giving an experimental theater performance, lol. they were doing this type of stuff in the 1920's in Zurich and PAris, for Christ's sake. GUH PAVEH. KHALAS. Educate yourselves and open your minds, folks.
Anita Davidian 2019-11-07 18:13:44
I would be more concerned with the Armenian language being undermined at Armenian Universities. We are an intelligent people... many of us know several languages. Why should we give up our own language? The Russians would love that. Then it would be a matter of time that they annex Armenia like Ukraine. Sexual orientation or being transgender has nothing to do with patriotism. At least know the facts.