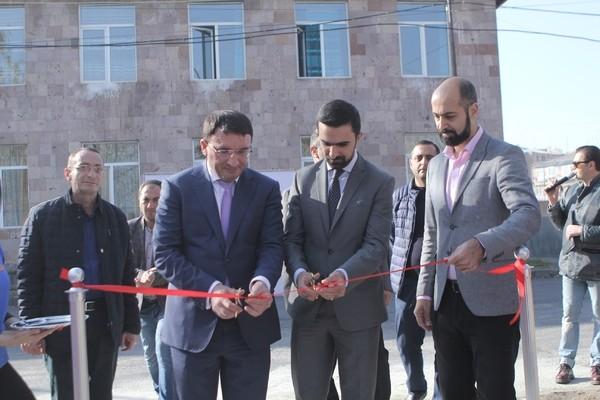 The following is a paid press release.

On November 8, the opening ceremony of a professional sports ground financed by Converse Bank took place in Nor Hatchn, a town in Armenia's Kotayk Province.

Guests from regional government and local self-government authorities, representatives of Converse Bank and StreetWorkOut Armenian Federation, residents of Nor Hatchn were present at the event.

The project for construction of professional sports ground in Armenia and Artsakh was launched last year as part of Converse Bank’s 25th Anniversary Events. As a result, sports grounds were built in the Bank’s five partner communities in Yerevan, Shushi, Gyumri, Metsamor and Nor Hachn. The total cost of the project made about AMD 24 million.

“With opening of a professional sports ground in Nor Hatchn, we are finishing the project designed to promote healthy lifestyle. Implementation of this project gave the habitants of  5 communities in Armenia and Artsakh new opportunities to run healthy lifestyles and engage in sports. The sports grounds are built in compliance with the highest international standards. Designed both for professional athletes and beginners, they have become the integral part of the daily life of communities in a very short term”, said Artur Hakobyan, CEO/Chairman of Executive Management of Converse Bank.

The deputy governor of Kotayk region Arnak Avetisyan welcomed the participants and guests of the event and highlighted the role of the private sector in community development.

“Professional sports grounds are considered as one of the best ways to promote healthy lifestyle in the world. We express our gratitude to Converse Bank for supporting this new culture in Armenia. We are sure that these sports grounds will become one of the favorite places of the young generation  in Nor Hatchn and in the other four residential settlements as well”, mentioned Ghazar Hakobyan, Chairman of StreetWorkOut Armenia Federation Board.

The opening ceremony of the sports ground was finished with exhibition performance of the StreetWorkOut Armenia team.