Tlik, a mostly Yazidi-inhabited village in Armenia a mere 200 meters from the Turkish border, still lacks a permanent supply of drinking and irrigation water.

This problem has plagued Tlik for the past 27 years and the patience of local residents, those that have remained, is growing thin.

Many have simply moved away.

Residents have heard any number of government officials and other promise to resolve the matter. None of their promises have been fulfilled.

Tlik’s plight has been widely covered in the press, and Hetq has focused on the village for the past five years.

Covering this issue has become a pointless occupation. How many articles need to be written, how many times should we raise the alarm so that the right of people living here to access water, sanitation and hygiene is no longer ignored?

This new election was held because then incumbent community leader Slavik Saloyan, the only candidate for the post lost in the December 8 election by a vote of 9 for and 13 against.

This time there were two candidates - the incumbent mayor and the Yazidi language teacher of the Tlik school, Alik Mstoyan.

I spent the whole day covering the election in Tlik.

The voting was peaceful enough. It had to be. The village only has a population of one hundred or so. I was surprised to learn that there are 114 names on the voter role.

I met Mraz, a Tlik resident, in the afternoon.  A truck carting irrigation water had just arrived at his house. The water is collected from nearby villages.

Mraz invited me to his home. Near the truck, I also met Mame, his brother, who asked me to take photos.

Each truck shipment of irrigation water costs 7,000 drams. The water lasts for a week at most.

“Come brother. Take a video. Let people see how we live,” Mame said, as his three sons played on the truck.

Mame told me that irrigation water must be trucked in from the nearby town of Talin because the pump used to fill Tlik green cistern from the Akhouryan River has been broken for the last two months.

“In the past, we could melt the abundant snow and water the animals. We haven’t seen a normal snowfall in two years,” Mame said, adding that he pays 350 drams for forty liters of drinking water shipped by the truck.

Walking through Tlik, I understood just how vulnerable Armenia is in terms of desertification. There are almost no trees in the village.

According to some data, 40-60% of Armenia is on the verge of desertification. The causes of desertification are related to both the geographical position of the country, global warming, and the relentless short-sighted use of artesian water.

Mame also offered to show us the kitchen. The small building serves as a bathroom and a kitchen. The family bathes here, heating the water brought by hand in buckets over wood stoves since there is no gas in the village. 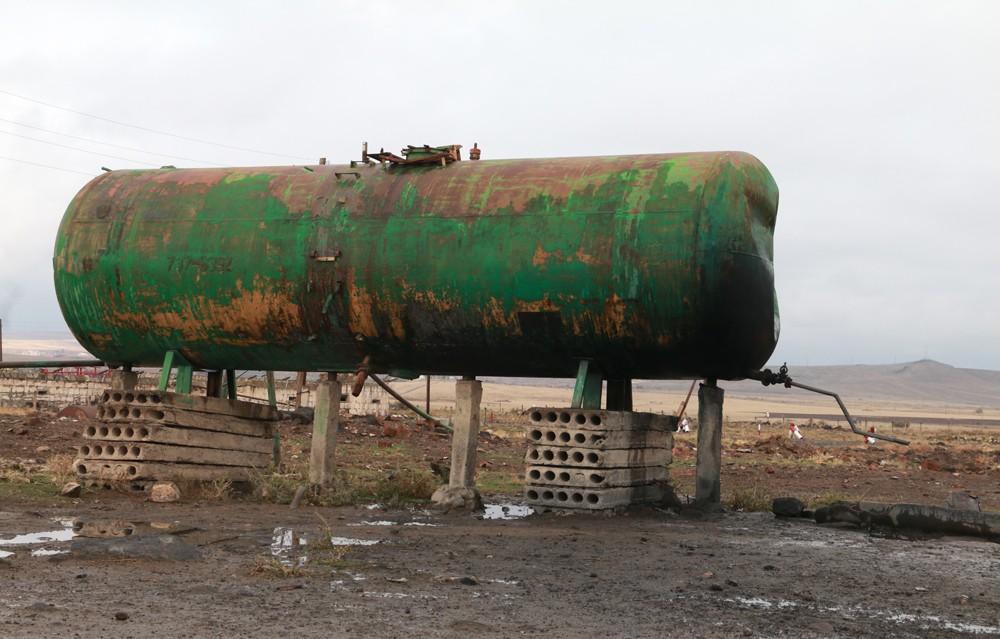 Towards the end of our conversation, Mame referred to the election, noting that resolving the water issue was uppermost in the minds of voters.

“Since the incumbent mayor was not able to solve this problem for four years, most residents voted against him in the previous elections,” Mame said.

On Election Day, January 19, 33 voters cast ballots. Half an hour after the polls closed, the count had already been completed. The incumbent, Slavik Saloyan, won with 17 votes.

Saloyan’s friends, who haven’t resided in Tlik for years, travelled from overseas just to vote in his favor. Residents said it was not fair.

Saloyan told me said that they had not violated any law.

He said the irrigation water matter would be resolved this year. What remains is to get some paperwork in order, Saloyan claimed.

Tlik residents are adopting a wait and see attitude to the mayor’s promise.

On the Armenian Side of the Akhouryan: “In worse shape than the ruins of Ani”

Yezidi Village School: Coal Stoves are Relics of a More Prosperous Past

Armenia’s Tlik Village: Residents Can Only Dream of Having Drinking Water

ani 2020-01-31 16:28:41
hello HETQ- team ! As a friend of Armenia since 1994 ( ! ) I like to read you very much . For water problems, there is a society in Switzerland, that helps poor villages to get drinking water.. Go to www.helvetas.org -->english --> what we do --> water As ofenglish speaking people, you may connect / translate the contact between that org. and the village authorities. I hope and pray it will be fruitfull and the villagers will get water ; that's double important for villages near boarders !! If they have no water, they will leave, and THE ENNEMY will take their lands ..