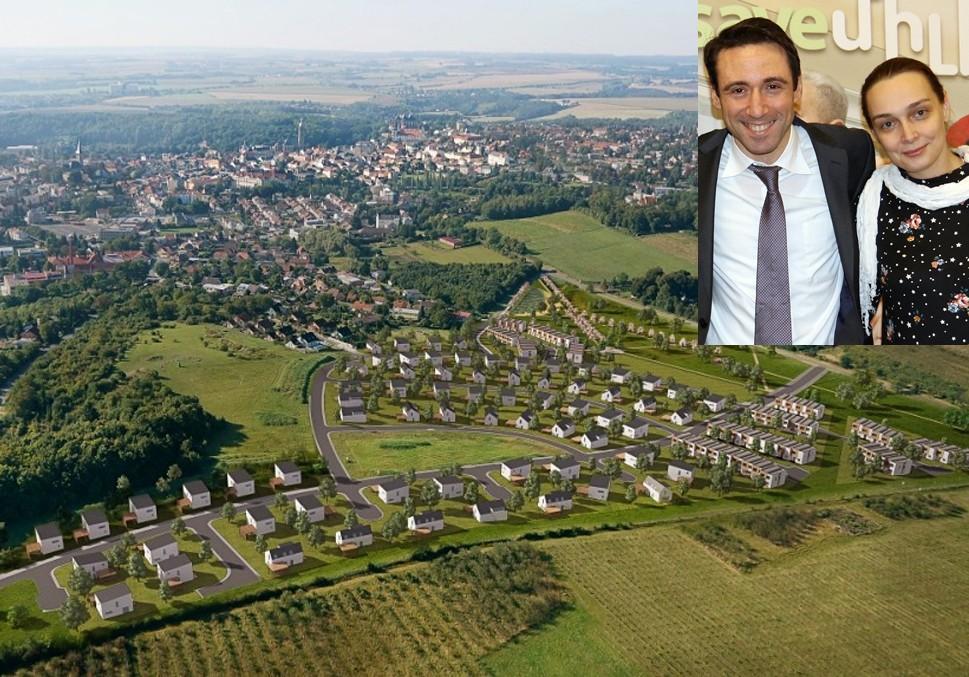 Hayk Marutyan has been Yerevan mayor since October 2018.

It should be noted that Iva Marutyan is Czech by nationality and a Czech citizen. The couple’s four minor children are also citizens of that country.

Hayk Marutyan told reporters last year that he was an Armenian citizen, did not have Czech citizenship, but did not disclose any other information. We are talking about the right to reside in that EU member state.

When Hayk Marutyan submitted a declaration of property and income to the Central Electoral Commission on the eve of the September 2018 elections to the Yerevan Council of Elders (Municipal Council), he noted that he had 2 units of real estate on Yerevan’s Northern Avenue (an apartment and a garage). In addition, the candidate declared 8 units of property in the Czech capital Prague (5 apartments, 2 plots of land, 1 private house).

Hetq wrote about this in 2018. Note that part of the Czech property is owned by Marutyan alone, and the other part is jointly owned by his wife, which we found out from the country's real estate registry. 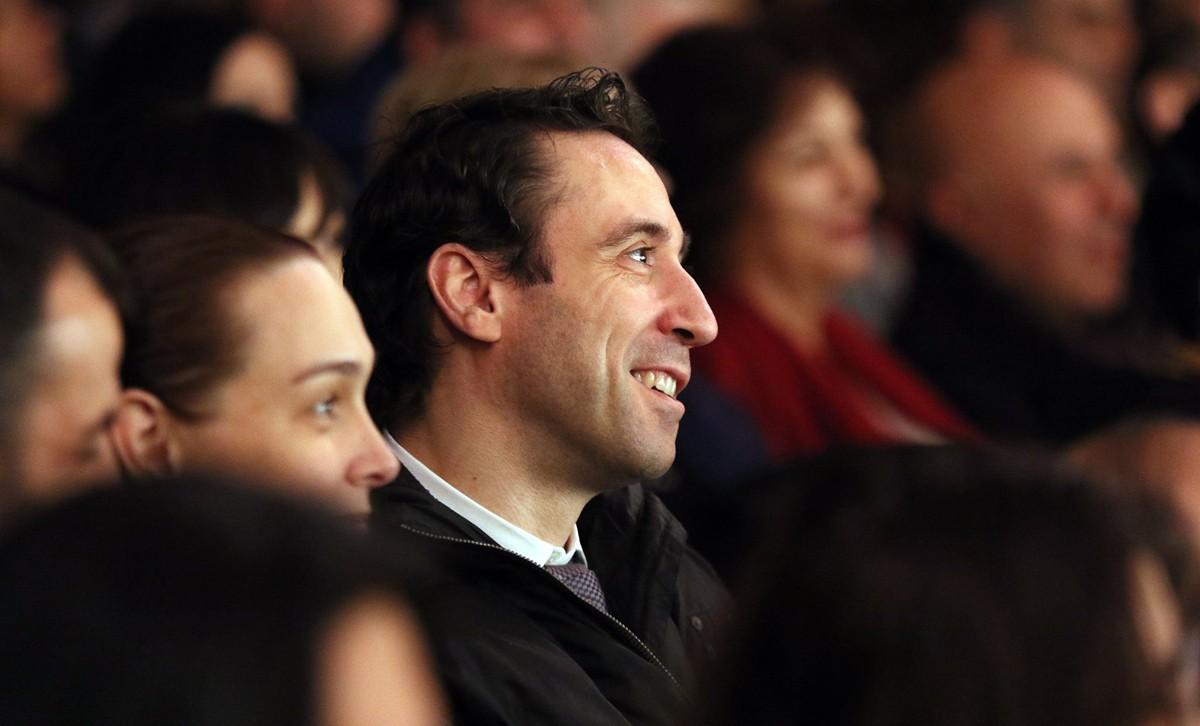 However, after being elected mayor, Marutyan sent a statement to Armenia’s Commission for the Prevention of Corruption (formerly the Ethics Committee of High-Ranking Officials) in which the real estate data was different.

In contrast to the ten units of real estate presented to the CEC, Hayk Marutyan mentioned twice as many - 21 units of property, all of which are listed as joint property. However, it should be noted that this significant difference is not explained by the acquisition of new property, given that Marutyan did not buy any new property during the gap between submitting his disclosure to the CEC and the commission. Moreover, he acquired that property from March 2006 to June 2018. We learn this from his 2019 disclosure completed in the new format.

Hetq has written to the mayor to for clarification on this disparity.

Marutyan noted that in 2018, in his disclosure to the CEC, he did not include Yerevan real estate (2 out of 4 - an apartment and a garage in the Kentron Administrative District), which is registered in the name of his wife. He says this property was later included in the disclosure filed with the commission as jointly owned by him, since "according to the Commission's instruction in the electronic register of declarations, the declared real estate, which is the joint property of the spouses, is declared by only one of them: as joint ownership.”

In other words, Marutyan followed the commission's guideline and presented the property registered in his wife’s name, but acquired during the marriage and considered joint property according to RA legislation, to the commission.

It appears that in this case, Hayk Marutyan could have also presented to the CEC the property registered in the wife’s name, but acquired during the marriage, which according to RA legislation is considered the joint property of the two of them.

As to why, in 2018, he reported 8 units of Prague real estate to the CEC, which became 17 in the declaration provided to the commission, Marutyan explained that the reason was different declaration methodologies.

"In 2018, on the day of assuming the post, my wife and I owned 5 apartments, 1 private house and 2 plots of land in the Czech Republic. (In 2018, Hetq wrote that some of them were registered in the name of H. Marutyan and others in the name of the couple. But the mayor considers all of it joint property, based on the above-mentioned legislative norms - author). However, these 5 apartments have a small storage room, and 4 also have a parking lot. These storage rooms and parking lots were purchased at the same time as the purchase of the apartments under one contract and have the same cadastral registration number, and from that point of view were not considered as separate property units in the declaration submitted to the CEC. Meanwhile, according to the procedure of filling in the declarations approved by the commission, they were considered separate property units, and a separate note was made in the declaration regarding each of them,” H.Marutyan told Hetq.

It is interesting that the mayor, in his 2019 disclosure, which, as mentioned, was filled out according to a new format, noted that in June 2018, he bought one apartment, one plot of land and one unit of non-residential space in Prague. The annual declaration did not mention the acquisition of new property.

The official said that the property in question is on Prague's Krejčího Street.

Hayk Marutyan described the reason for not submitting the property in the annual declaration as a “technical oversight”.

"I mentioned the existence of that apartment and the land plot both in the declaration submitted to the CEC and in the 2018 disclosure when I assumed the office. However, in 2018 annual disclosure, this acquisition was not mentioned due to a technical oversight and currently the error is in the process of correction, after which the declaration will be republished in accordance with the procedure established on the commission's website,” Marutyan told Hetq.

As we wrote in the previous article, part of Marutyan's real estate in the Czech Republic is jointly owned by his wife (one private house, one plot of land, two apartments), which is confirmed by the data in the country's cadastre. In the 2019 disclosure, however, Iva Marutyan did not mention any property she purchased prior to 2019. The explanation for this is the above-mentioned guideline to completing the disclosure. According to this guideline, issued by the CEC, the joint property of the spouses is declared by only one of them as joint property. In this case, the Czech property (as well as the Yerevan property) was declared only by Hayk Marutyan.

However, in her 2018 annual disclosure, Iva Marutyan stated that she had bought a mansion with 6.5 million Czech koruna ($275,000 at today's exchange rate) that year, meaning that the acquisition of property in this case was not announced by the mayor but by his wife. But the latter's 2019 declaration does not show that property. In this regard, Hayk Marutyan told Hetq: "The transaction has not taken place, and the declaration has already been amended, which will also be published on the commission's website."

Instead, in the 2019 disclosure Mrs. Marutyan said had purchased three new properties the previous year, but not in Prague, but in the city of Kutná Hora.

According to Iva Marutyan’s disclosure, in March 2019, she bought a house (for 3.76 million koruna or $160,000), as well as two plots of land (100,000 krona each). The total property cost 3.96 million koruna or $168,000. The mayor's wife mentioned this real estate as joint property, but it doesn’t appear in Hayk Marutyan's declaration. The reason, as mentioned, is that the joint property must be declared by one of the spouses.

Hetq found this property in the Czech cadastre. Iva Marutyan is the sole owner (see below), but she reported it as joint ownership, again based on the definitions of the RA legislation. 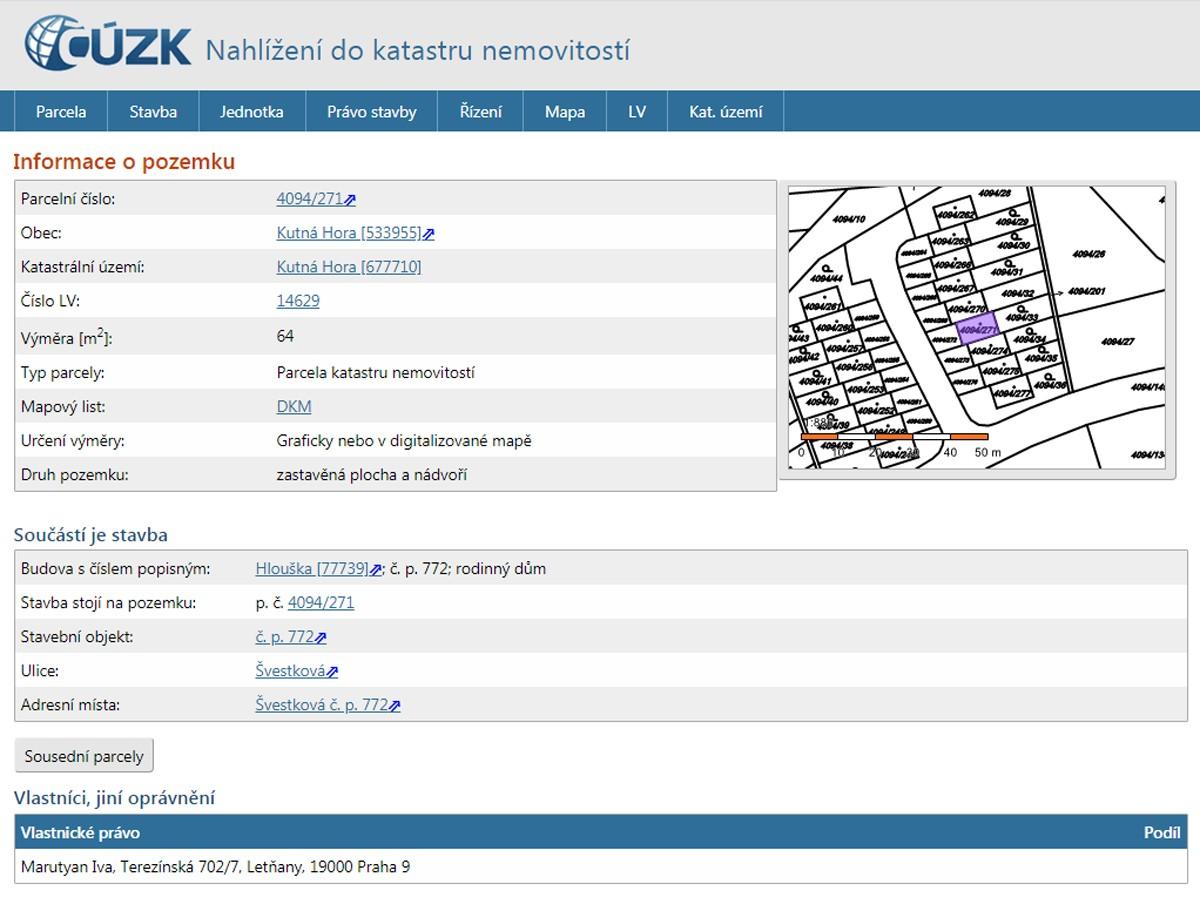 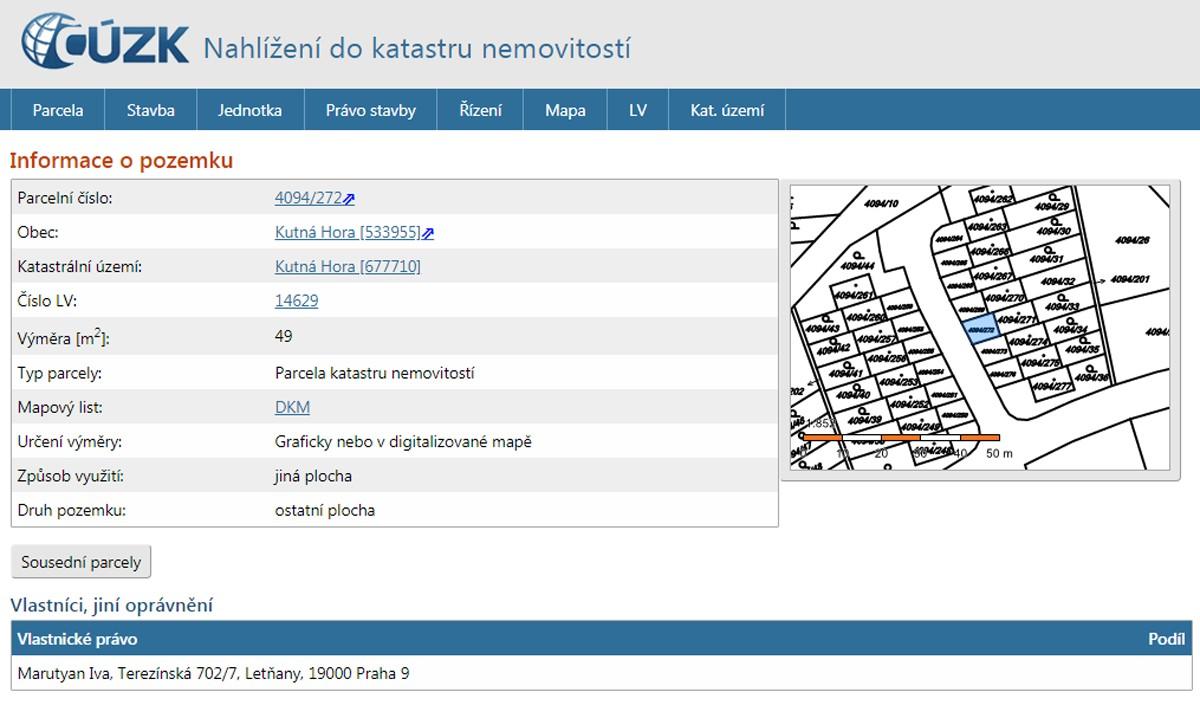 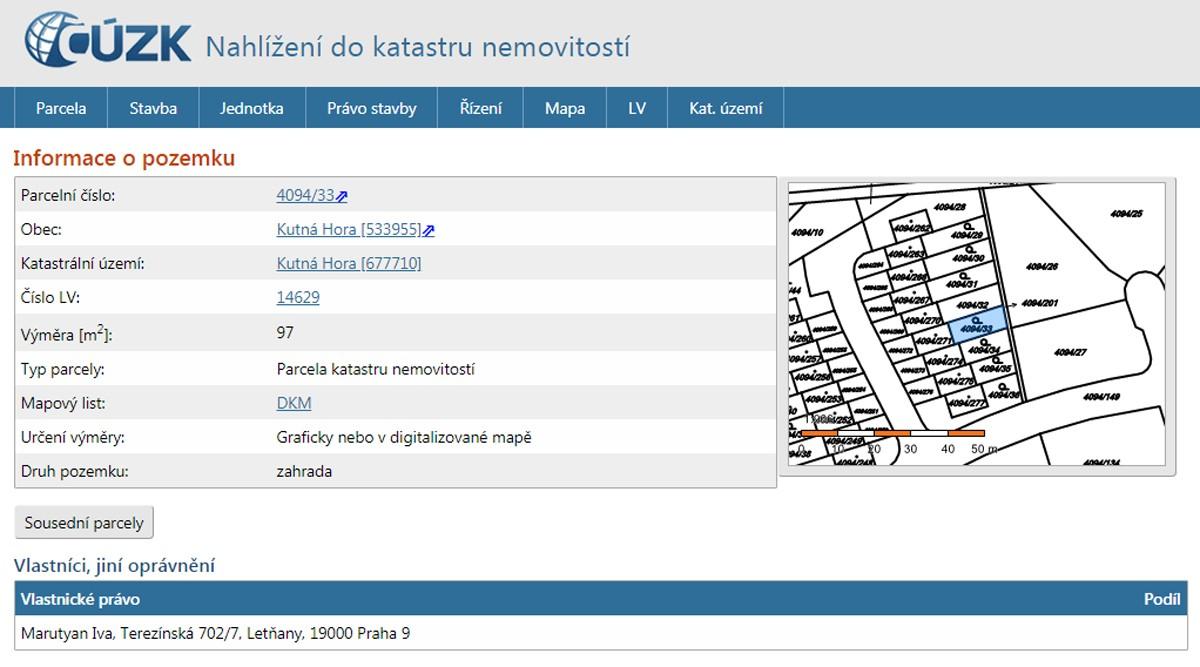 According to Iva Marutyan's statement, the seller of the property was the Czech company U.T.C. Properties LLC. Some information about the houses sold by this company in Kutná Horacan be found on the Internet. The company sells private houses in the Hlouška district, particularly on Jabloňová and Švestková Streets. Marutyan's house is located on Švestková Street. Google Earth shows that the house was not yet built in March 2019, when Iva Marutyan, according to her statement, had bought the property. However, in response to our question, the mayor noted that it was built at the time of signing the purchase and sale agreement.

U.T.C. Properties offers a variety of private home projects, but the new home purchased by the wife of the mayor of Yerevan is likely to match the design below. 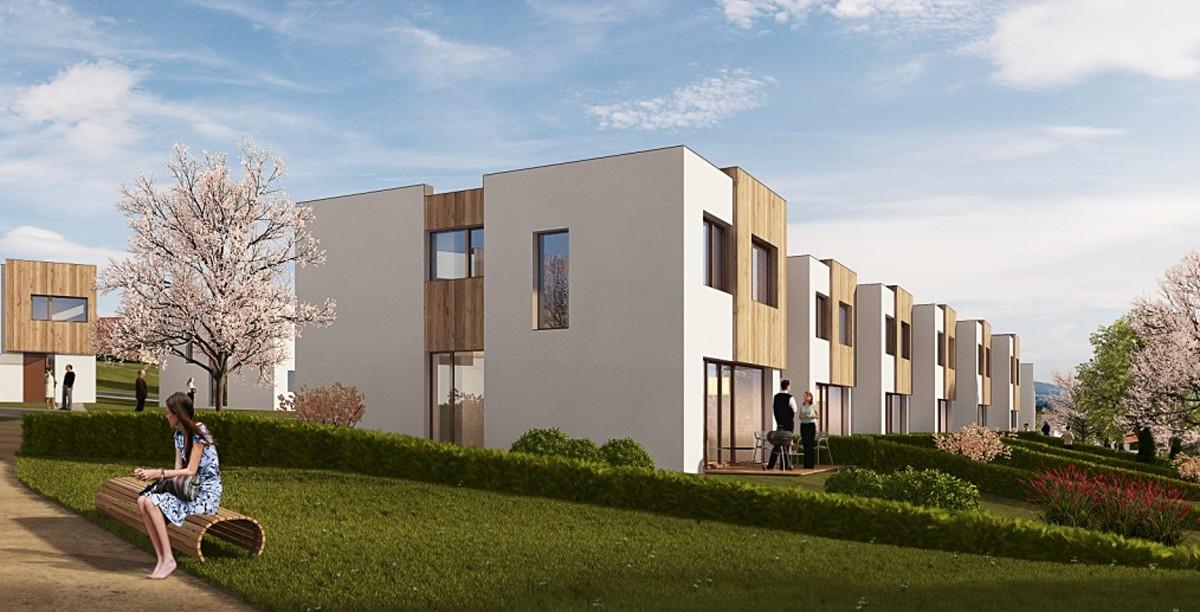 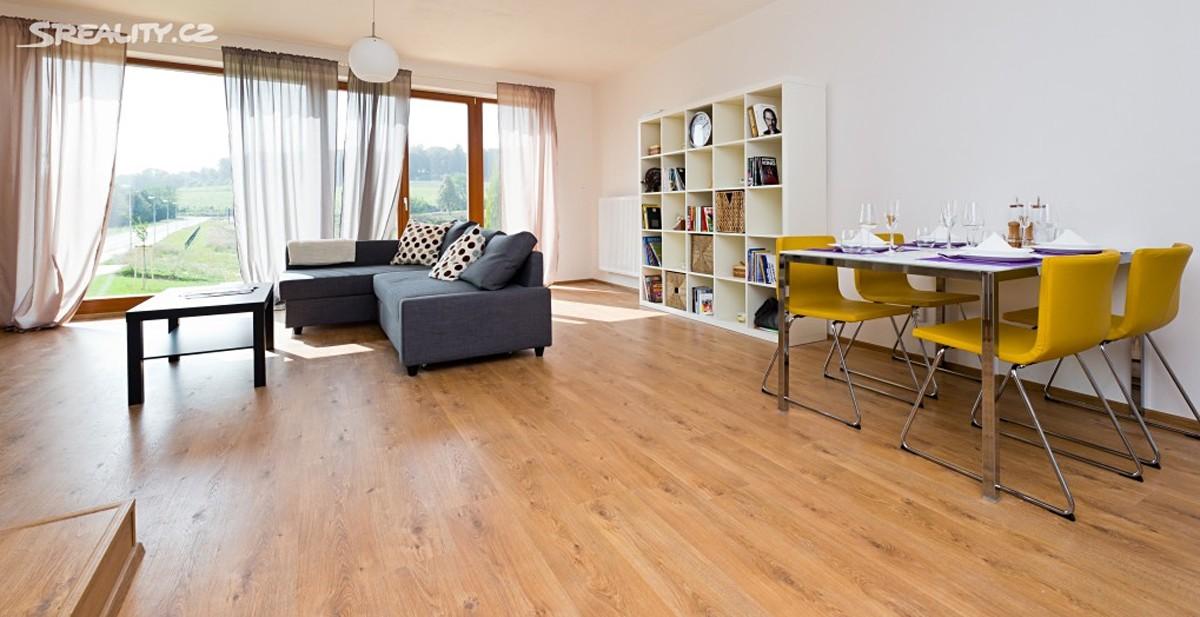 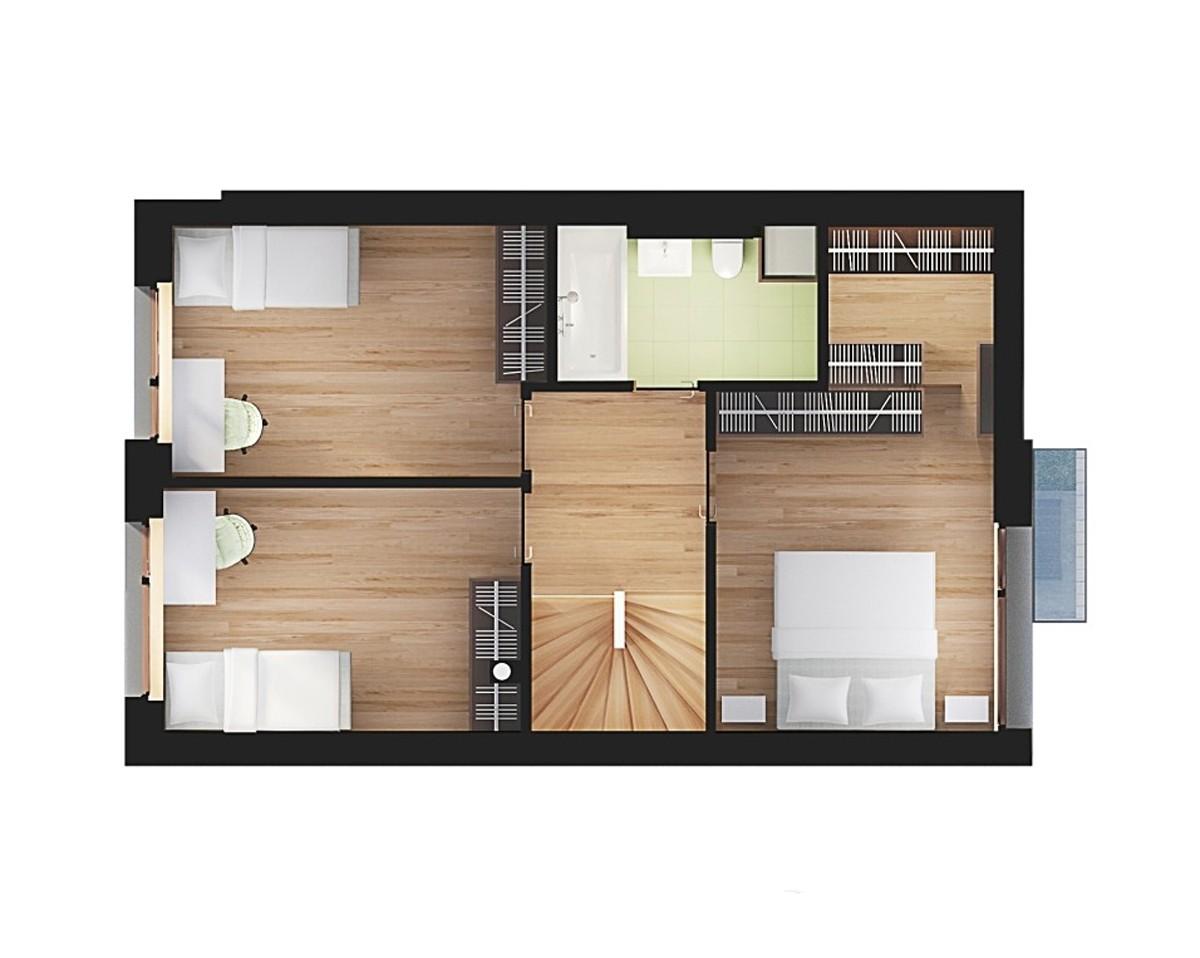 We should add that Iva Marutyan works at the Yerevan State Medical University (YSMU), where she is a graduate. In November 2018, she was hired as an assistant at the YSMU Chair of Epidemiology. According to 2019 disclosure, the mayor's wife received a monthly salary of 587,000 AMD. She reported end-of year cash assets of €230,000, US$70,000 and 6.1 million Czech korunas.

She started 2019 with 12.8 million Czech korunas. It dropped to 6.1 million by the end of the year due to the new house purchase.

In the first photo, Kutná Hora and the Hlouška district under construction.
The Marutyans’ photos are from Hayk Marutyan’s Facebook page.