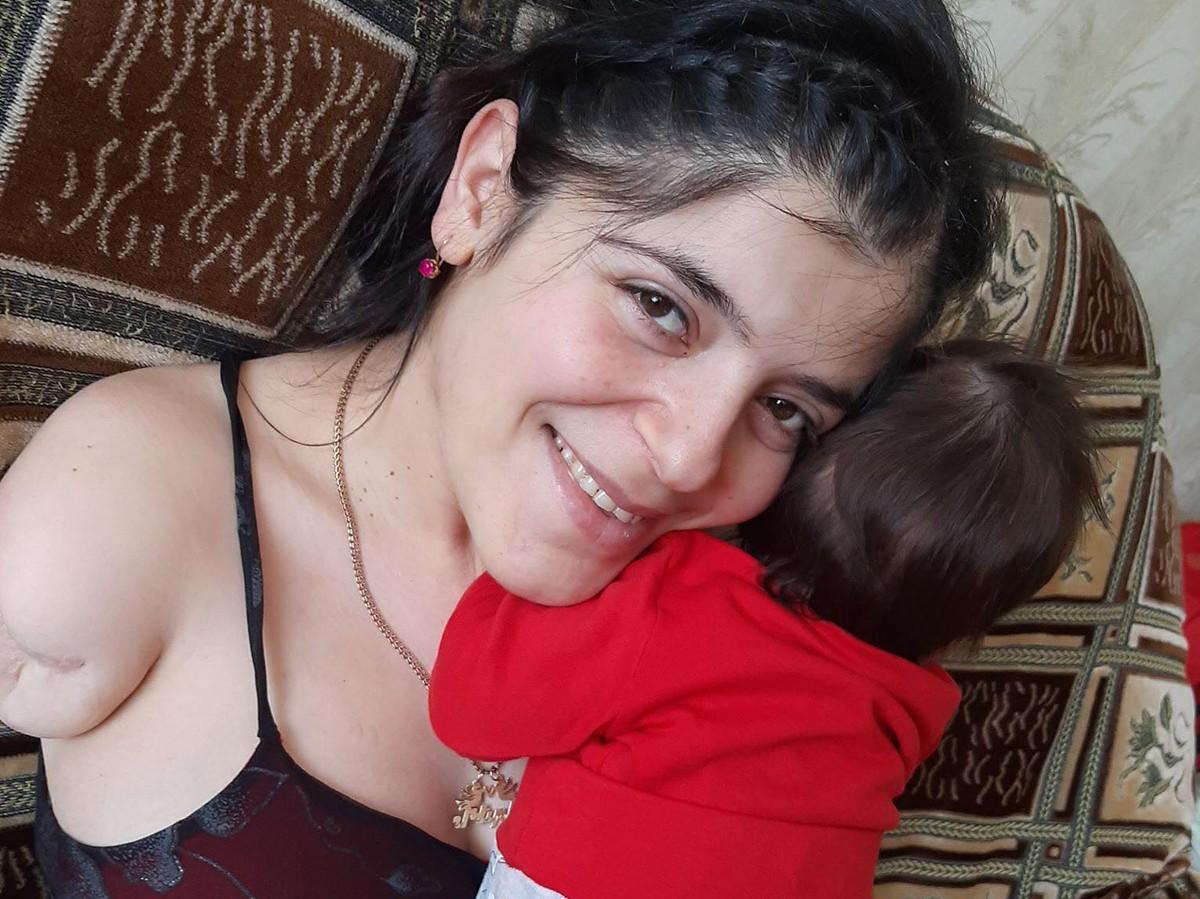 Karen, 2 months old, fills the room with his loud cries.

Mary turns to the bed where the baby is lying.

On May 7, in Kapan, Mary Mezhlumyan had a son, Karen. The baby was born two weeks ahead of schedule. Mary says he came fast, just like she did. (Kapan is the center of Armenia’s southern Syunik Province.)

We agreed to talk to Mary for a few days, but our conversation was relegated to the baby’s sleeping and eating breaks.

On July 23, 1993, eight-year-old Mary was playing outdoors together with her cousins and went to a spring to wash her hands when the Azerbaijanis starting bombarding Kapan. A cluster bomb exploded right next to Mary, throwing her into the water. Mary says her arms just melted away.

27 years after the incident, Mary still asks herself why it happened. Over the years, she’s concluded that it happened to her since she could overcome it, while others might not have had the will. 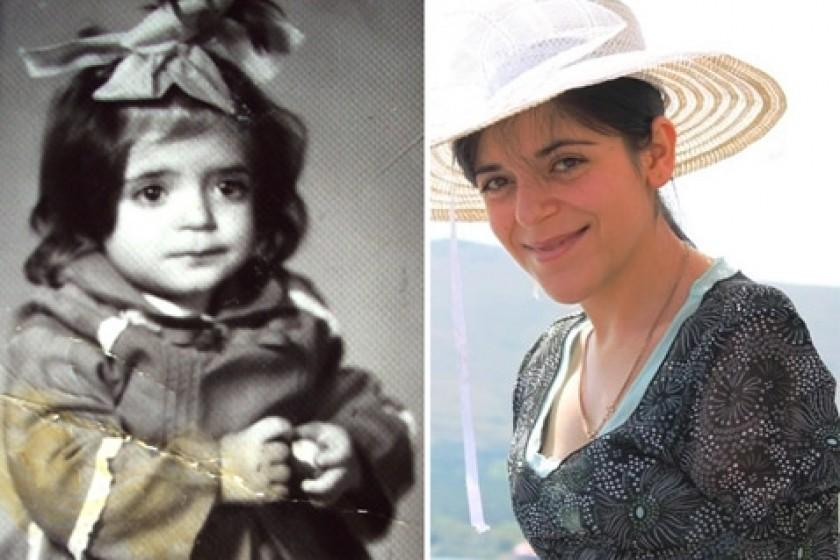 For a year and a half after the incident, Mary stayed at home. She shied away from going outside so that people would not look at her. Her parents were advised to invite teachers to the house, to home tutor the girl, but Mary’s father decided against it. He wanted his daughter to leave the house and interact with people. In time, Mary overcame her complex of appearing in public.

After graduating from high school, Mary studied at the Kapan branch of the National Polytechnic University of Armenia, majoring in economics.

For several years, Mary had refused to wear a prosthetic. She says one was too light to accomplish anything and the other was too heavy and cumbersome. Now, she finds them inconvenient for holding her son. The good and practical prostheses, according to Mary, are quite expensive. 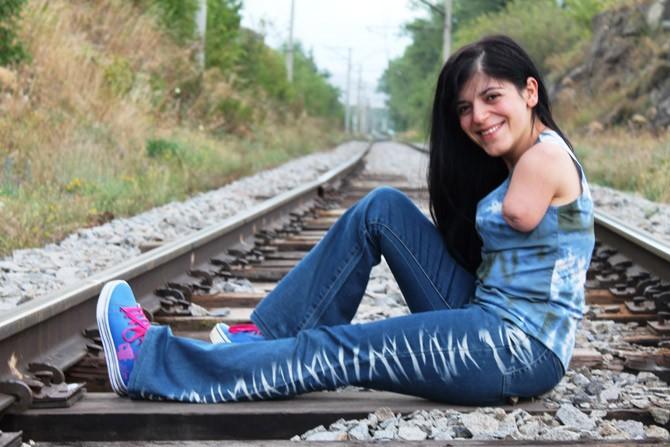 "I don't show that I'm upset. There are emotional moments at night when I'm alone. I remember what happened and ask why me. Maybe it’s because I was the strongest,” Mary said in one of our previous conversations.

She then told us about a neighbor's boy who has a disability and gets around in a wheelchair.

"When I look at him, I do not feel disabled myself. You must be strong, since whatever happens in life, human beings must bear it all. I know that bad luck is to be followed by good one, same as with the rain being always followed by the sun. Nothing stays the same. Life is too short for something to stay the same,” says Mary.

"Now I understand that I have become doubly strong"

Two years ago, on New Year's Eve, we were in Mary's living room, talking about this and that. The Christmas tree had already been decorated, and Mary, as usual, had a list of dreams to fulfill. 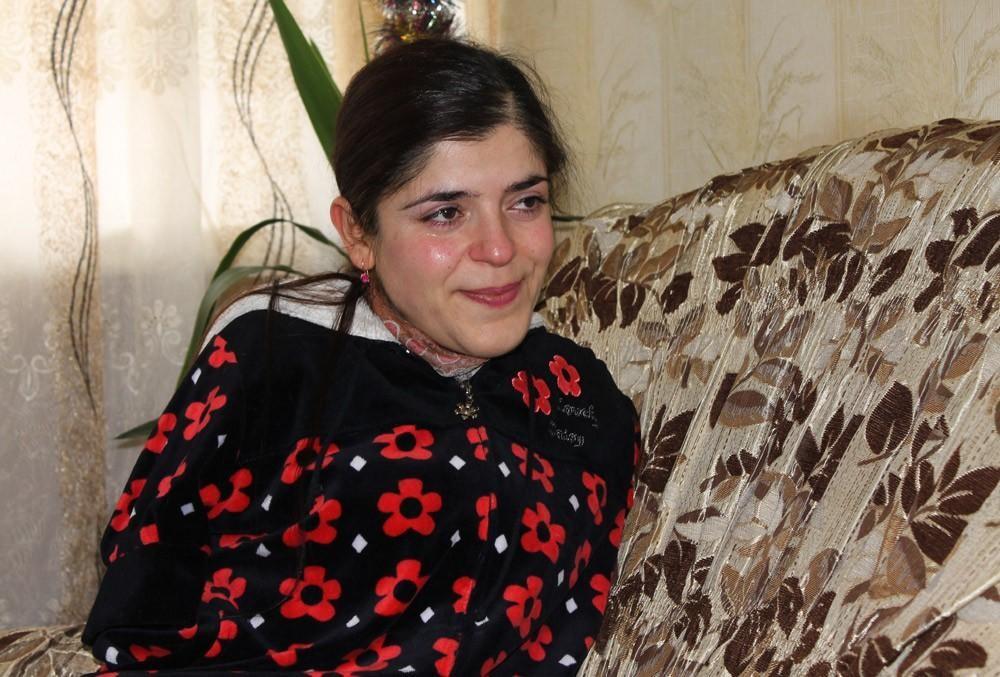 Now, Mary's dreams are tied to her son. She says that the most important thing is for her son to be grow up to be good person.

"Before Karen, I used to say that I was a strong person, but now I understand that I have become twice as strong. No one, nothing can beat me,” Mary says.

Little Karen has changed her life. The day passes unnoticed, feeding, bathing, and walking her son.

"Karenchik sleeps next to me in the quietest way. When he’s sleeping, you suddenly catch him smiling or breaking out crying. He seems to understand me,” says Mary, adding that she has been feeding Karen since day one.

"I already know who I live for. Before Karen I didn't live. Now, I live. I know why I was born, why God kept me so long. I was born at the age of six months and three weeks, weighing 900 grams. Then, I was bombed and lived again,” says Mary.

Before Karen and after Karen

Mary turned 35 this May.

She seems to have divided her life into two, before Karen and after Karen. Mary says that before she had a son, she wondered why there were so many difficulties, and now realizes that she had to travel down that road to have her son.

When I ask Mary about the difficulties she now faces, she immediately responds that she can overcome them all because her life’s main goal has been realized – she’s become a mother. She says that financial difficulties are solvable, and the most important thing is to be spiritually at peace. 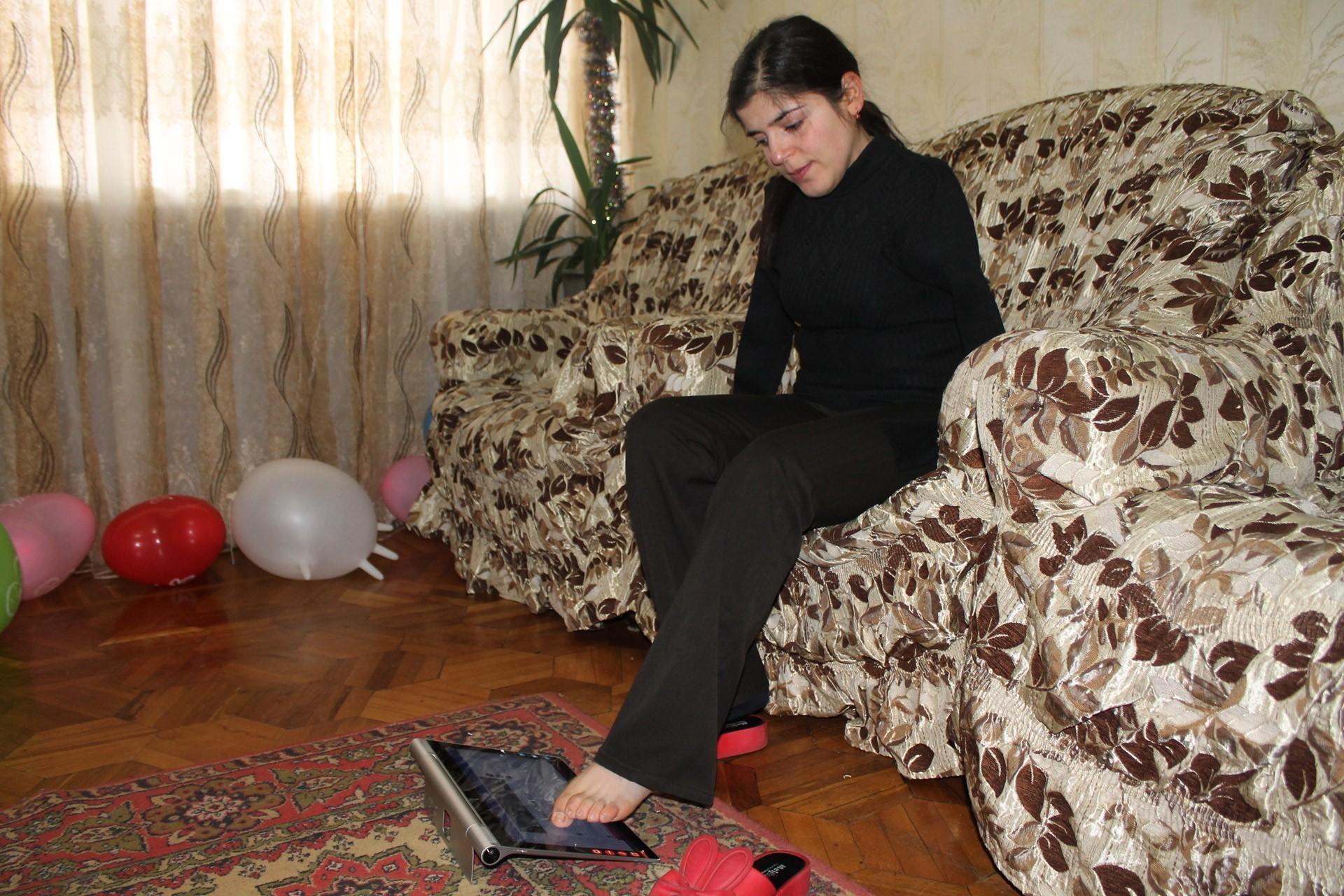 To date, she has not been able to change her disability status which incorrectly states that "the cause of the disability is due to a childhood sickness”. Mary has written to countless various government agencies, but nothing has changed. She says that the law must be changed before any correction can be made.

"People should look at me and then laugh at their own problems. When I look at how people complain, it seems odd. They don't appreciate what they have,” says Mary.

Over the years Mary has learned to make coffee and to style her hair by using her feet.

- What meals do you cook?

- Whatever you say. I can't wrap dolma alone or peel potatoes, but if I use my brain a little, I'll learn that too. I also iron clothes with my feet.

Mary plans to do certain things on her own in terms of taking care of Karen but acquiring the skills will take time.

"But in any case, I need a pair of extra hands to take care of Karenchik," she says, adding that Karen's birth has given her wings. 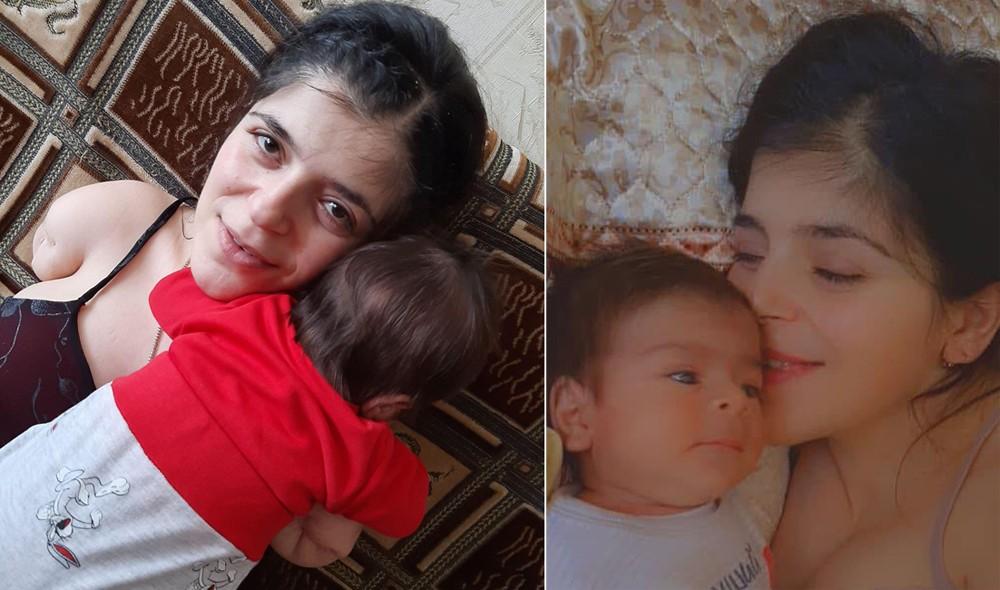 "I dream of Karen becoming a very good person. Second, that he gets a good profession so that he can, like a strong mountain, stand at my back. I want to live a carefree life with Karen. Let there be a good work. Karen and I will be inseparable,” Mary says.

hovsep 2020-07-10 17:34:08
Dear Mane.....of course the story is not about the father, as you say. But, as a reader, the first question that pops into my head after reading the article is just that - who is the father? why isn't there even one mention of him? It's a glaring ommission on the part of the authors. Yes, Mary is a courageous woman....who said otherwise? If it was Mary's wish not to say anything on the subject, which is her right, then, at least, the authors might have said as much in the article, thus allaying any suspicion on the matter. You seem to be speaking on behalf of the authors when you write, "If it is not written, it means it is not our business, it means Mary doesn't want to tell." How do you know what Mary does, or does not want to say???? Did you write the article? The authors were derelict in their journalistic duties....That's all I'm pointing out. Please check your emotions at the door and refrain from speaking on behalf of others!
Armine 2020-07-10 12:46:57
hovsep, any (I think it's not just mistakenly that you type your names in a small letter)...Very typical to your personality! What you know about handicapped persons, prostheses (Is it possible to move with cheap ones and how much do useful ones cost?) And where you find in the article that the strong women asked for your help ? ....Questions that you raised only discovered your empty souls and mediocre personalities !!! Your speech about civilization has no value without realizing that every person has the right of private life and that kind of questions are just out of censorship!!! So sorry that your kind of humen still exists hovsep, any and people like you!!!
any 2020-07-09 00:27:52
yes, Hovsep , I agree with you... this story gives an idea of the typical mentality of Armenians : everything is alowed ,especially to handicapted. She studyd but refuses to wear prostheses which could able her to find a job and earn her OWN money for living !! Instead of, she MAKES a child without any responsability -- no father for the baby, no income a.s.o... WHAT a shamefull , egoistic mentality ! No, really, I can't have any pity . And awaits to get everything she needs payed by others ...
Arman 2020-07-08 21:16:38
Hovsep, I am wondering why are you interested to find out who the father is? You really didn't get the meaning of this story or you are trying to look smarter than you are. Meri has a wonderful child Karen, and we are proud of her. The story is touchy and sensitive!!! Seems like you are unhappy person in your life or maybe you are not tghamard enough otherwise you would never write such a terrible comment.
Mane 2020-07-08 20:52:14
Dear Hovsep, The story is not about father of the child, it's about brave woman. If it is not written, it means it is not our business, it means Mary doesn't want to tell.
hovsep 2020-07-07 16:12:31
This could have been a very good human interests story. Sadly, it's a mediocre one. The first question that springs to mind when reading it is WHO IS THE FATHER OF THE CHILD? Instead, we are treated to an overly emotional article that is very repetitive in nature....Did the authors even ask Mary how she met the father of Karen? Where is the father now? What happened? Either the authors failed to understand the relevance of such questions or were too lazy to ask. Finally, does Hetq even edit such pieces? It's sloppy writing...