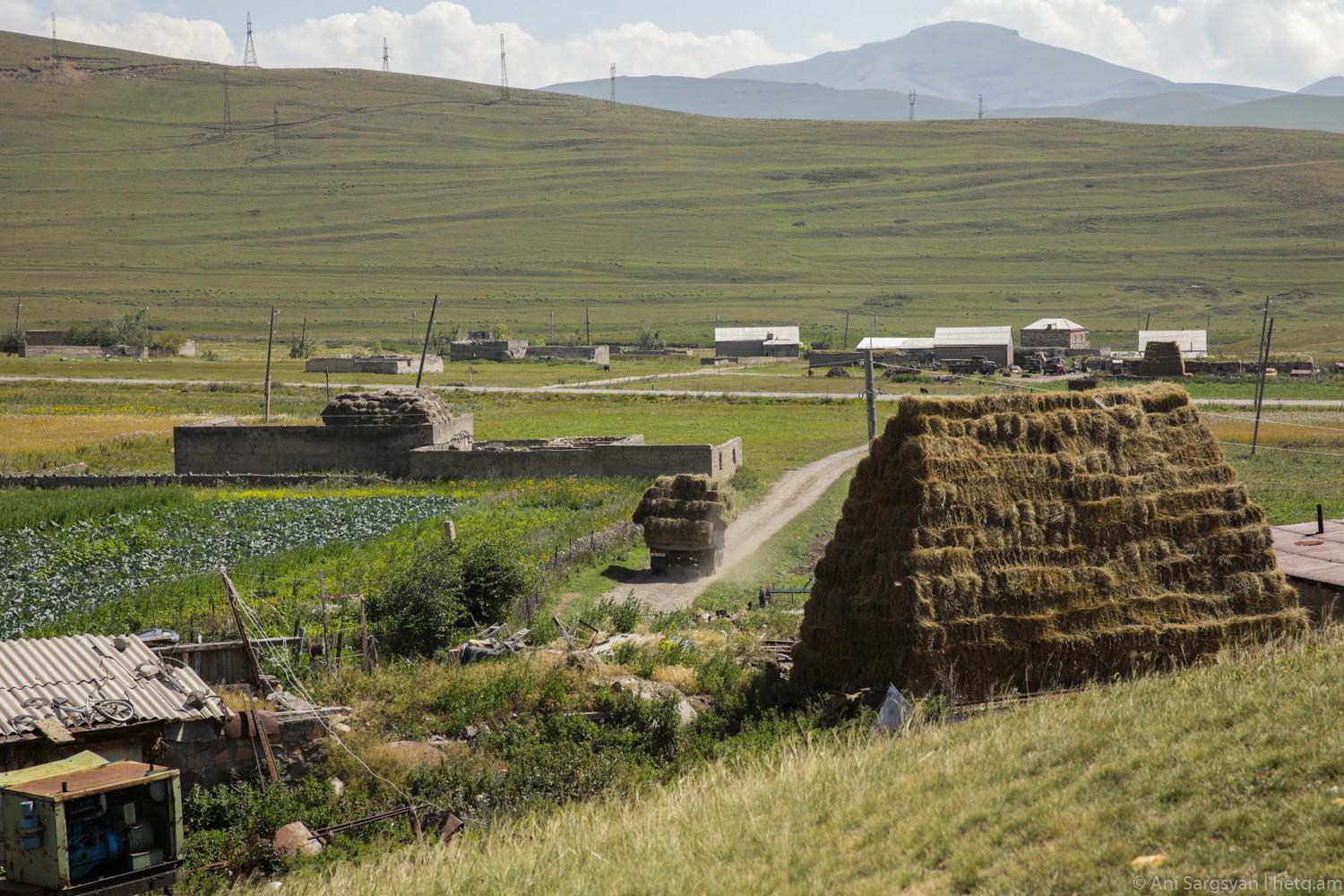 Sotk could have been one of the finest of villages in Armenia had GeoProMining Gold, the company that operates the largest gold mine in the country, been a bit more ethical in its dealings with residents.

Meanwhile, like most highland villages in Armenia, Sotk resembles a destitute village of dusty streets, one-story ramshackle houses, and dilapidated buildings. Even after becoming the part of the Geghamasar community incorporating eighteen area villages, Sotk's poor and disorganized appearance has not changed much.

The 1,780 residents of Sotk, a village in Armenia’s Gegharkunik Province, breathe in the gray poisonous dust rising from the mine and landfill area all year round. Groundwater leaving the mine area is contaminated with heavy metals and toxic substances. It all flows into the Sotk River, the water od which is used by residents to irrigate their vegetable gardens and land. Sotk joins the Metz Masrik River which then empties into Lake Sevan.

The cold-hearted and arrogant attitude of the mine management has angered residents who believe the company can mitigate the negative environmental impacts of the mine by using modern technologies. They say the mine can operate in a closed fashion but that the company doesn’t want to.

Sotk resident Vardan Hayrapetyan says the company dug holes under the mine to collect polluted water which is then sent to the Sotk River.

"We have always demanded that the river not be polluted. We are told that they will build a treatment plant, but they do nothing. We have been waiting for twenty years for a treatment plant to be built. Perhaps we’ll have to wait another twenty," says Hayrapetyan. A cloud of dust covers the Sotk gold mine 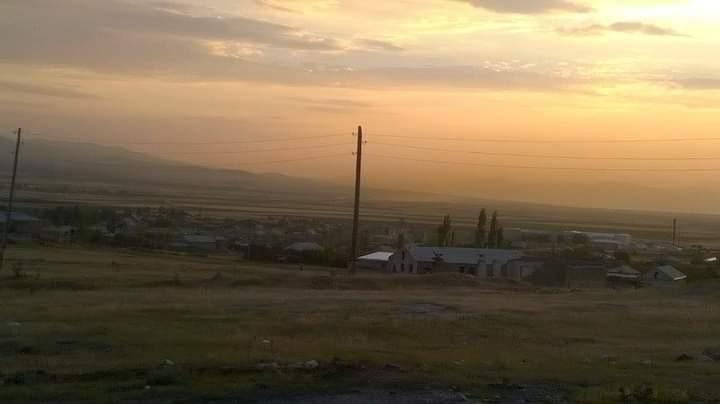 GeoProMining management promised to meet with the residents to discuss the issues raised. The next day, however, the company issued a statement calling the protests "baseless." The company claims that "the mine is operated in accordance with safety standards and environmental norms." It also argued that it pays compensation for the damage by implementing various social and environmental projects.

According to the Law on the Targeted Use of Environmental Taxes Paid by Companies, environmental tax paid by companies entitled to extract metal minerals is proportioned to communities where the activities of these companies have a detrimental effect.

Sotk is the only village in the enlarged Sotk community recognized as “impacted” and thus eligible for environmental tax allocations. What it gets, in return for the pollution, is a paltry 2.2 million drams ($4,515) annually. The calculation used by the government is a mathematical nightmare. 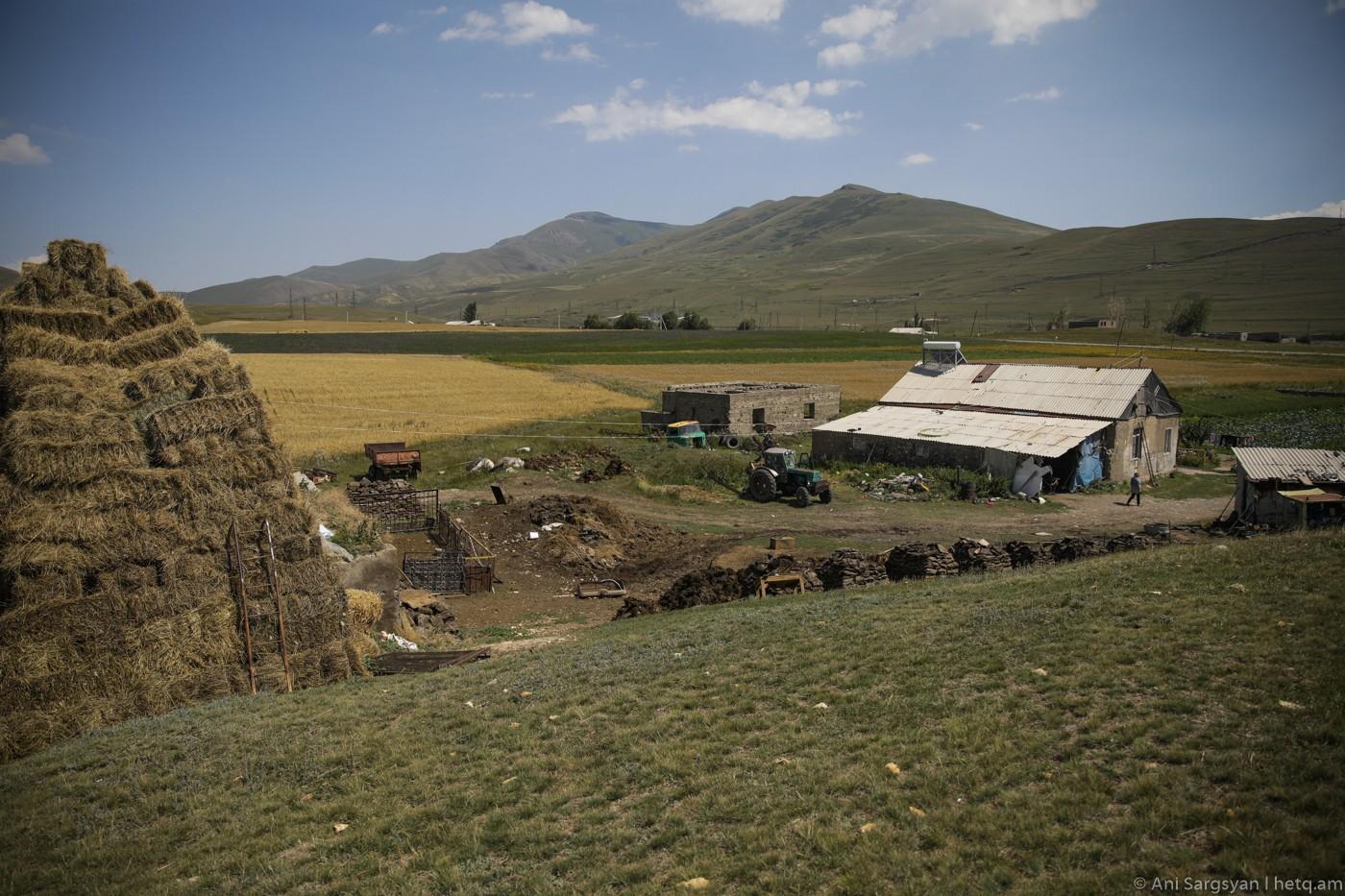 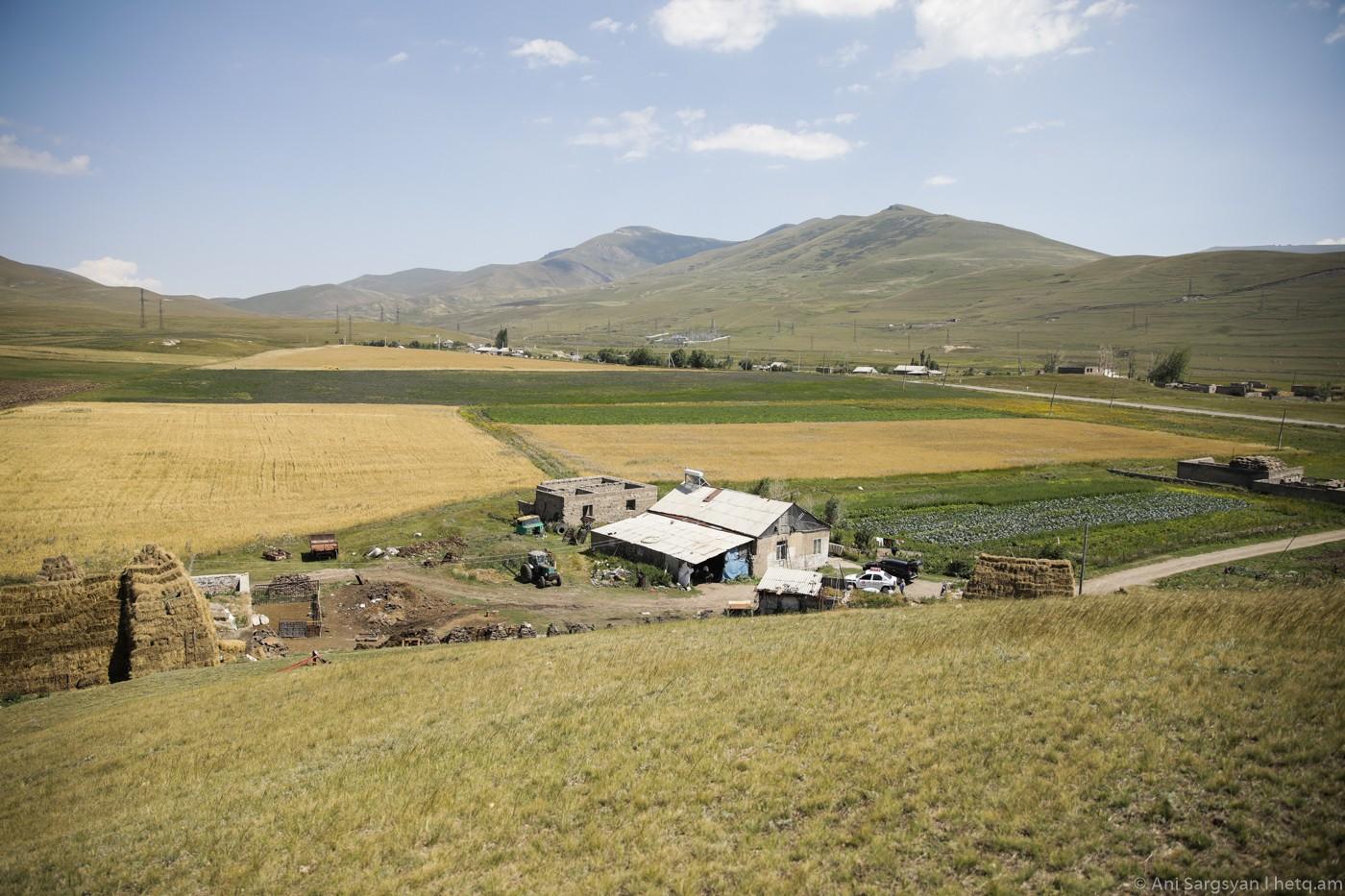 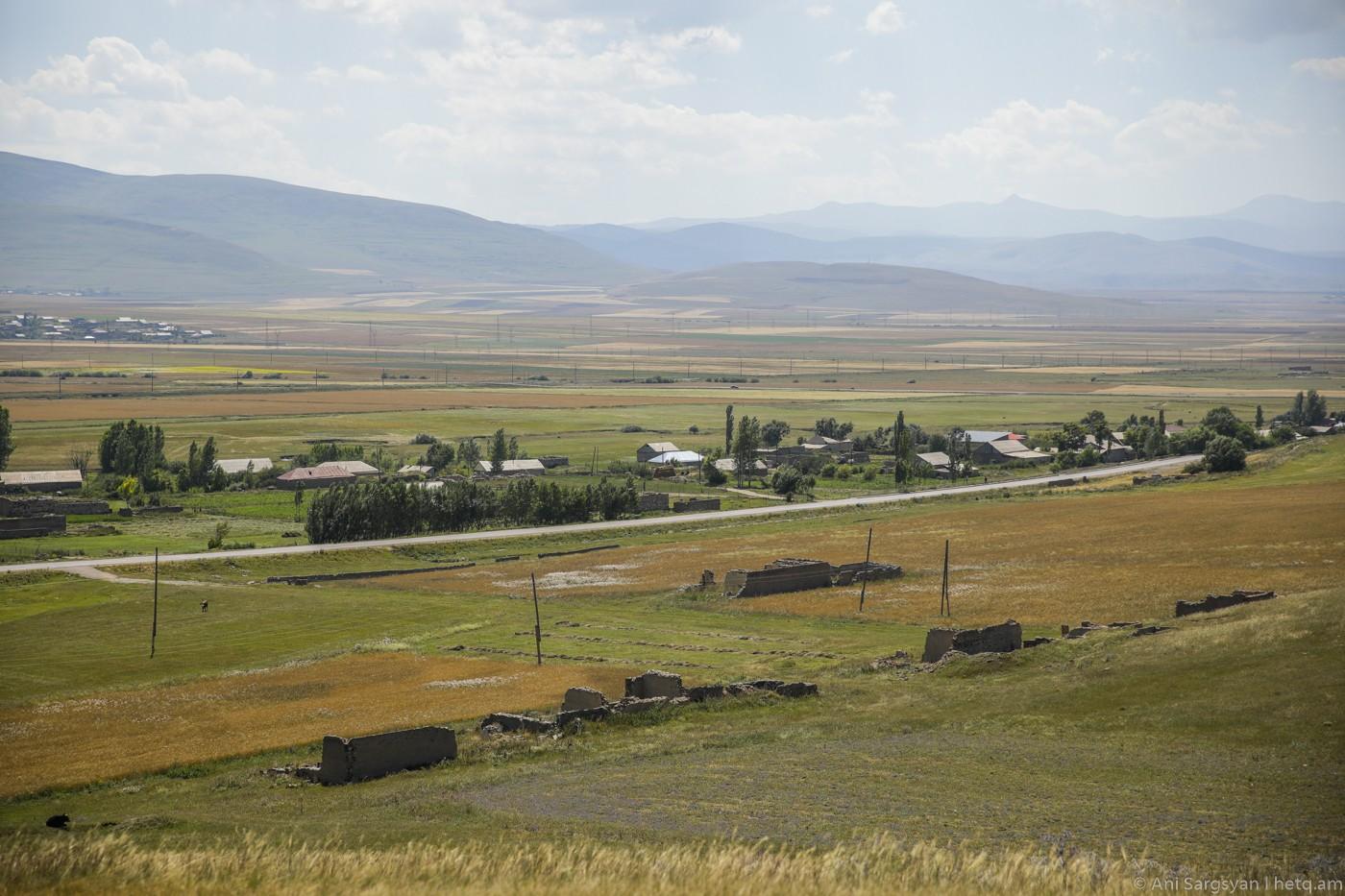 To receive an environmental subsidy, the local mayor must submit an environmental health plan to the municipal council for approval. The application is then submitted to the environment and health ministries. Once approved, the money is transferred from the state budget to the community budget.

GeoProMining Gold has operated the Sotk mine since 2007. In 2017, the community was enlarged, and the company’s current management is unaware of the environmental subsidy expenditures of previous years. The last time the Sotk municipality received an environmental payment was in 2015 - about 11 million drams to cover five years. The money was to be used to build a community park. It remains half-built, the land fenced.

"It's a small amount of money. We don't get it every year. We let it accumulate so that we can continue investing in the construction of the park," said Davit Shahnazaryan, an adviser to the Geghamasar mayor. He said that this year the municipality will apply for the money accumulated during the last 5 years to complete the park. 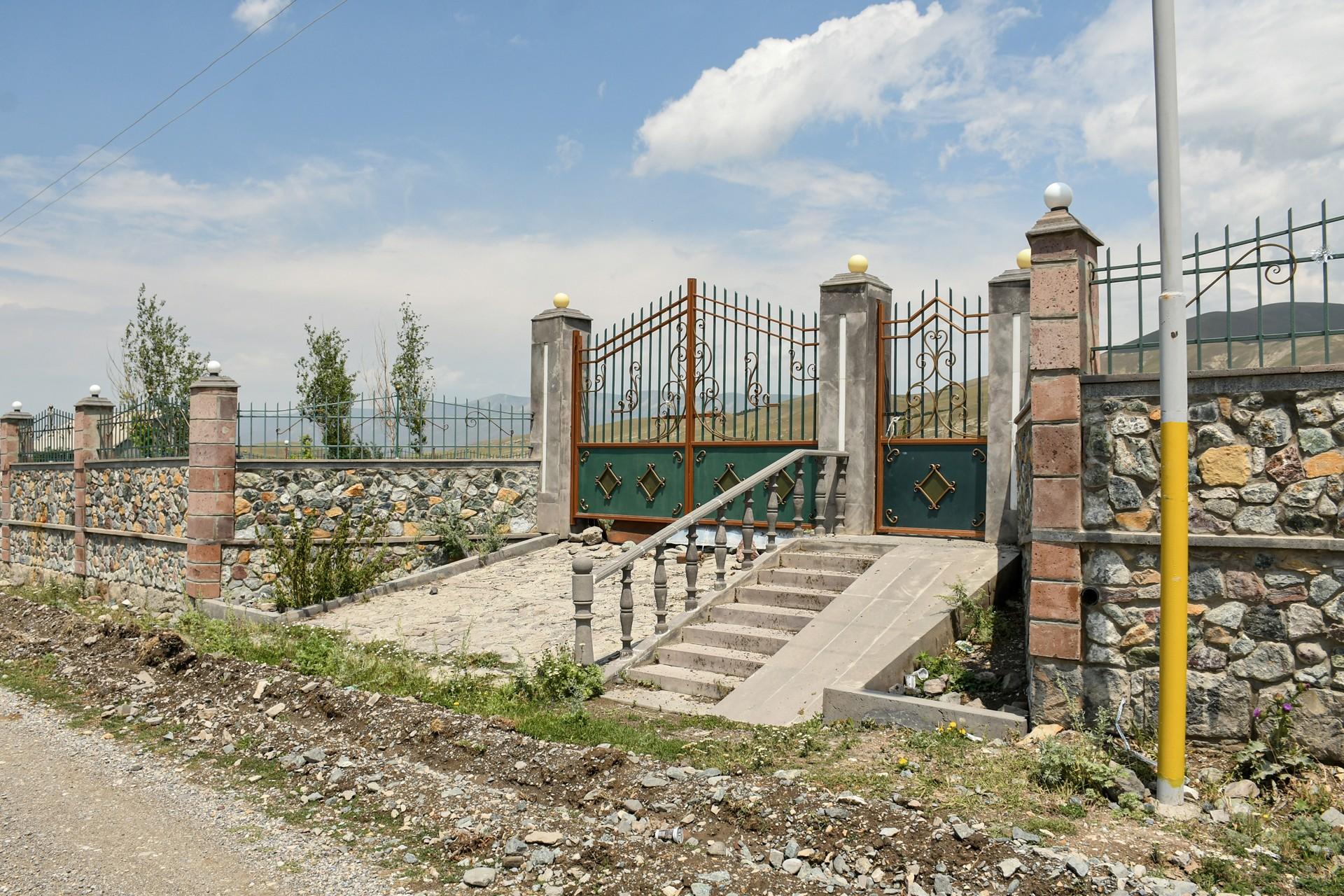 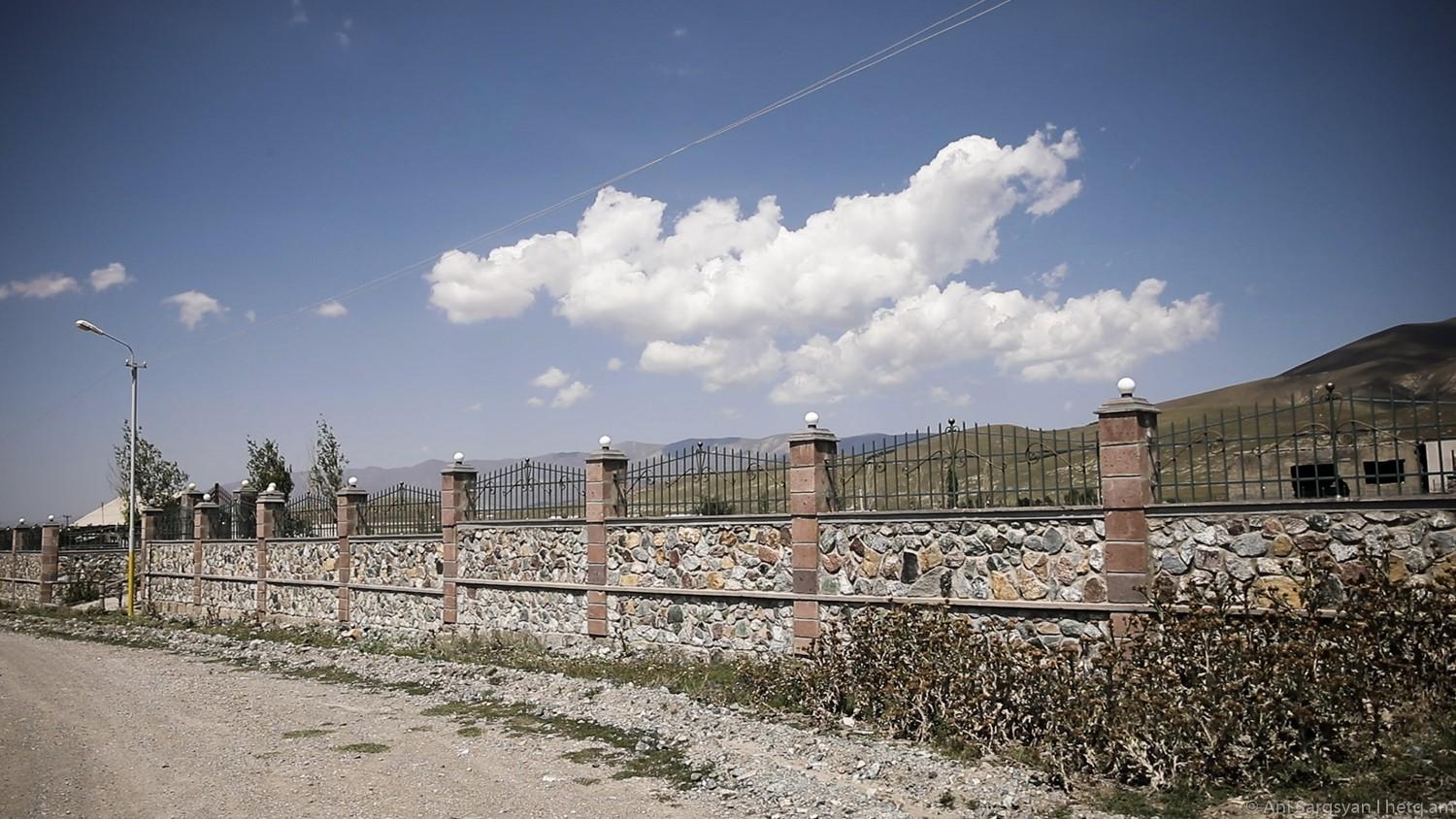 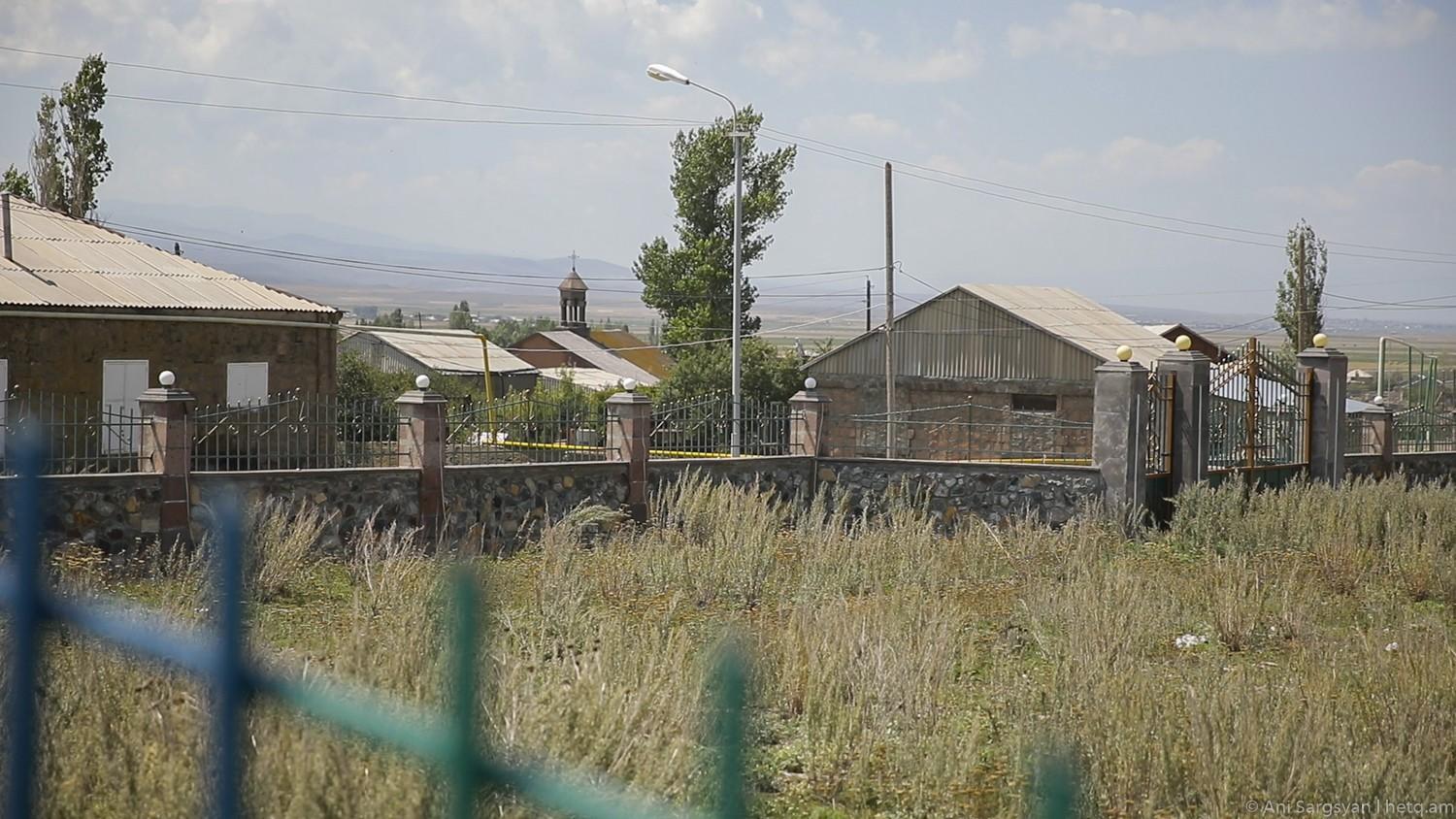 What Sotk really needs is an infusion of funds to buy equipment and supplies for the village dispensary. The only piece of equipment to be seen is a blood pressure monitor. Where’s where the mining company could step in and help.

"I would like to have an EKG unit. The blood glucose meter is broken, and we have no replacement. They did not provide any assistance to the clinic,” says longtime outpatient nurse Alvina Shirinyan. 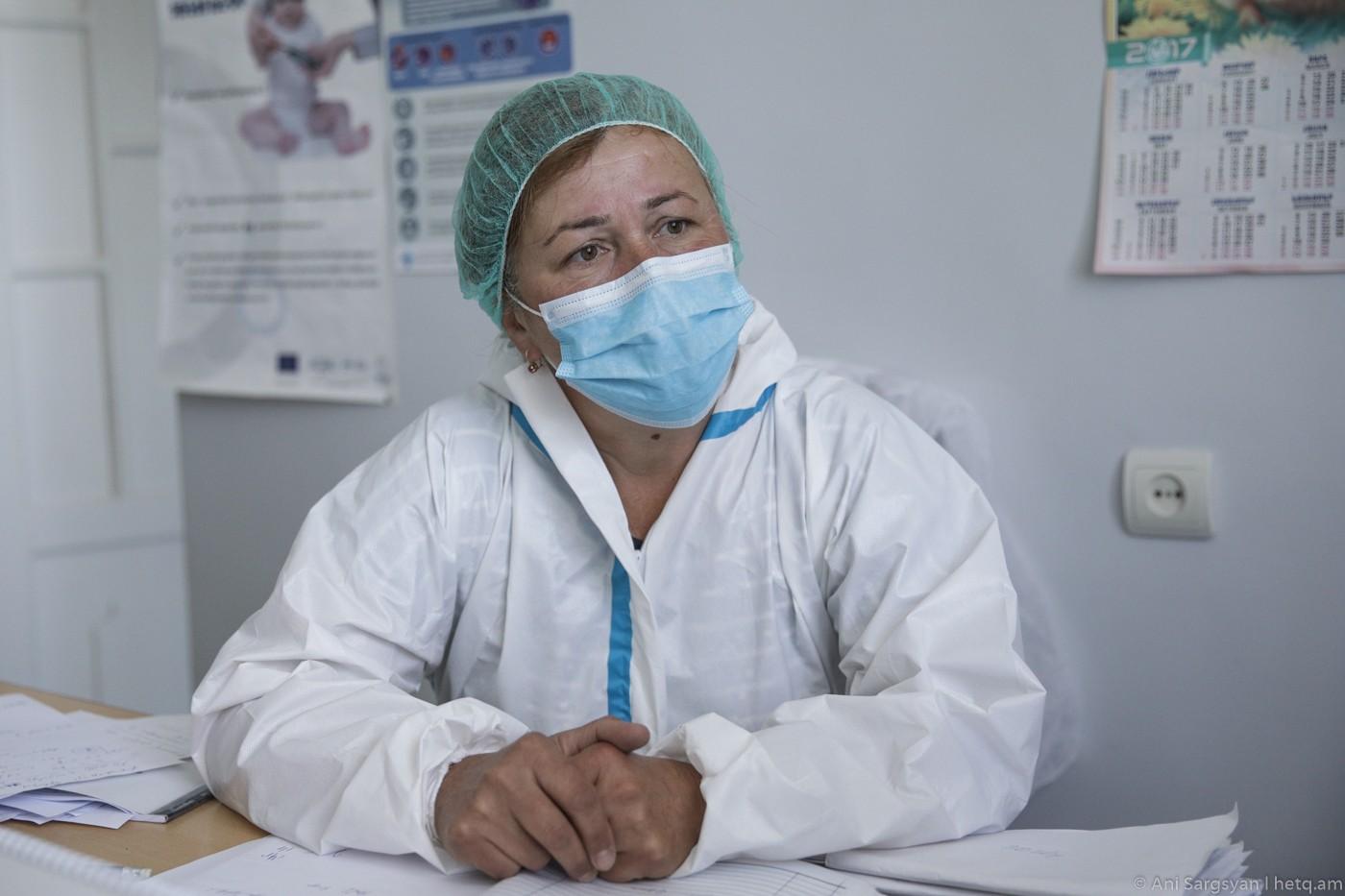 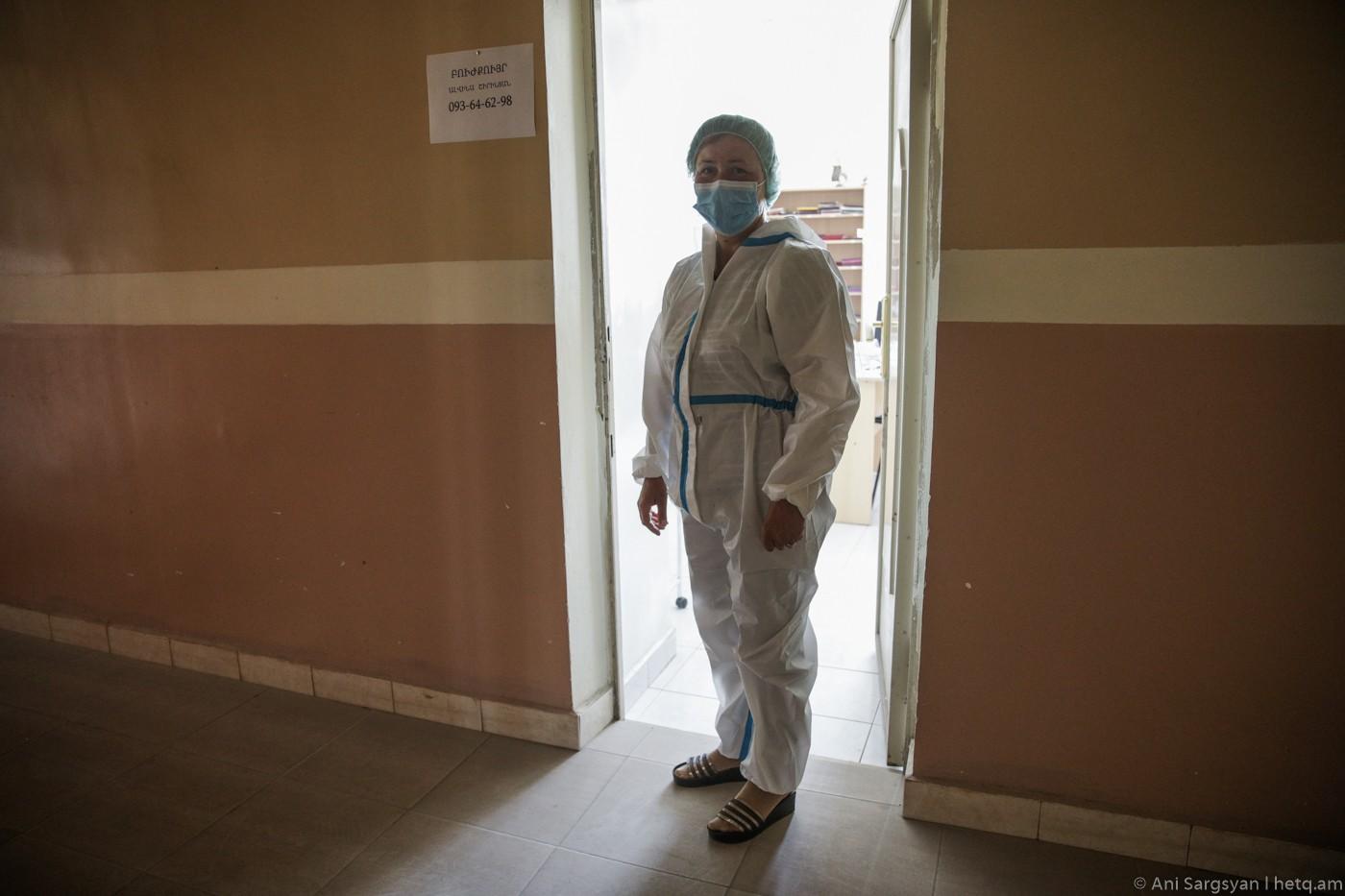 Residents claim that the number of impacted villages has been artificially cut and that the mine impacts a much greater area than officially recognized.

"At least seven villages are in that zone of influence. Sotk is the epicenter, but the villages of Azat, Kout, Shatvan, Norabak, Tretouk, Kakhak and Kutakan in the Geghamasar community are also negatively affected by the mine. They blow up twenty tons of ammonia here every day, and the local winds are strong. The toxic dust reaches them," says Geghamasar Community Mayor Hakob Avetyan.

"It is true that we are not experts. We haven’t even tested air and water pollution levels, but the consequences are visible. A part of the village draws irrigation water from a deep well. Deep well irrigated crops look healthy and fresh by autumn, while river irrigated crops do not. Given this comparison, we see that the problem is the water," says Avetyan. 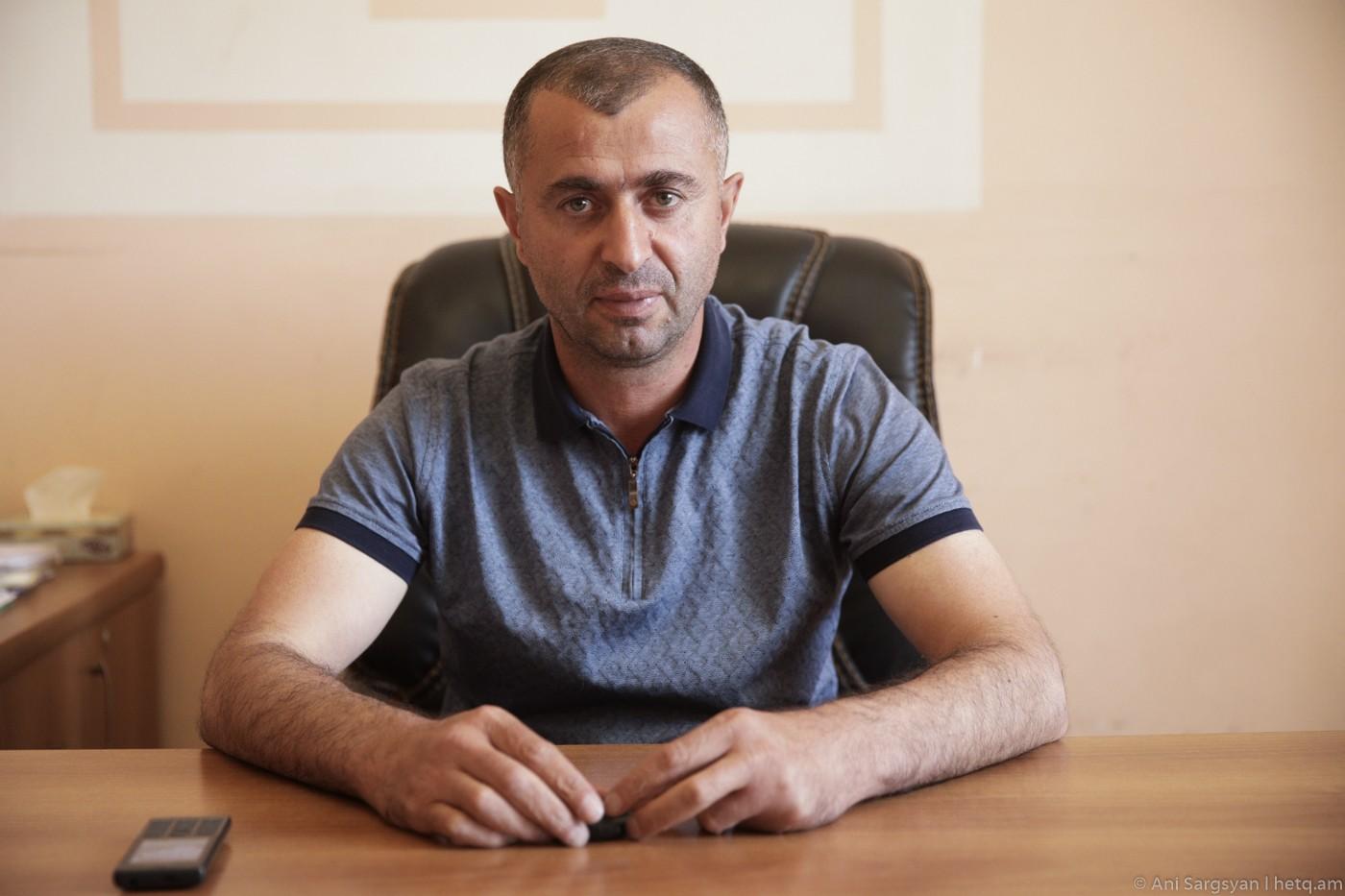 After years of sowing but not harvesting, residents have either given up completely or drastically reduced the acreage farmed because the air and water are polluted with toxic substances that have greatly reduced crop yields.

"Some eight or ten years ago no one wanted to work in the mine. At that time, the mine did not cover such a large area and the damage was not great. Each person cultivated 3-4 hectares of land, from which they earned an income of 3 million drams, and they did not damage their health by working in the mine. Now, they spend 500,000 drams to sow the field, but they do not reap anything. They have no income. They are forced to go to work in the mine, but the company isn’t hiring,” says Sotk resident Vardan Hayrapetyan. 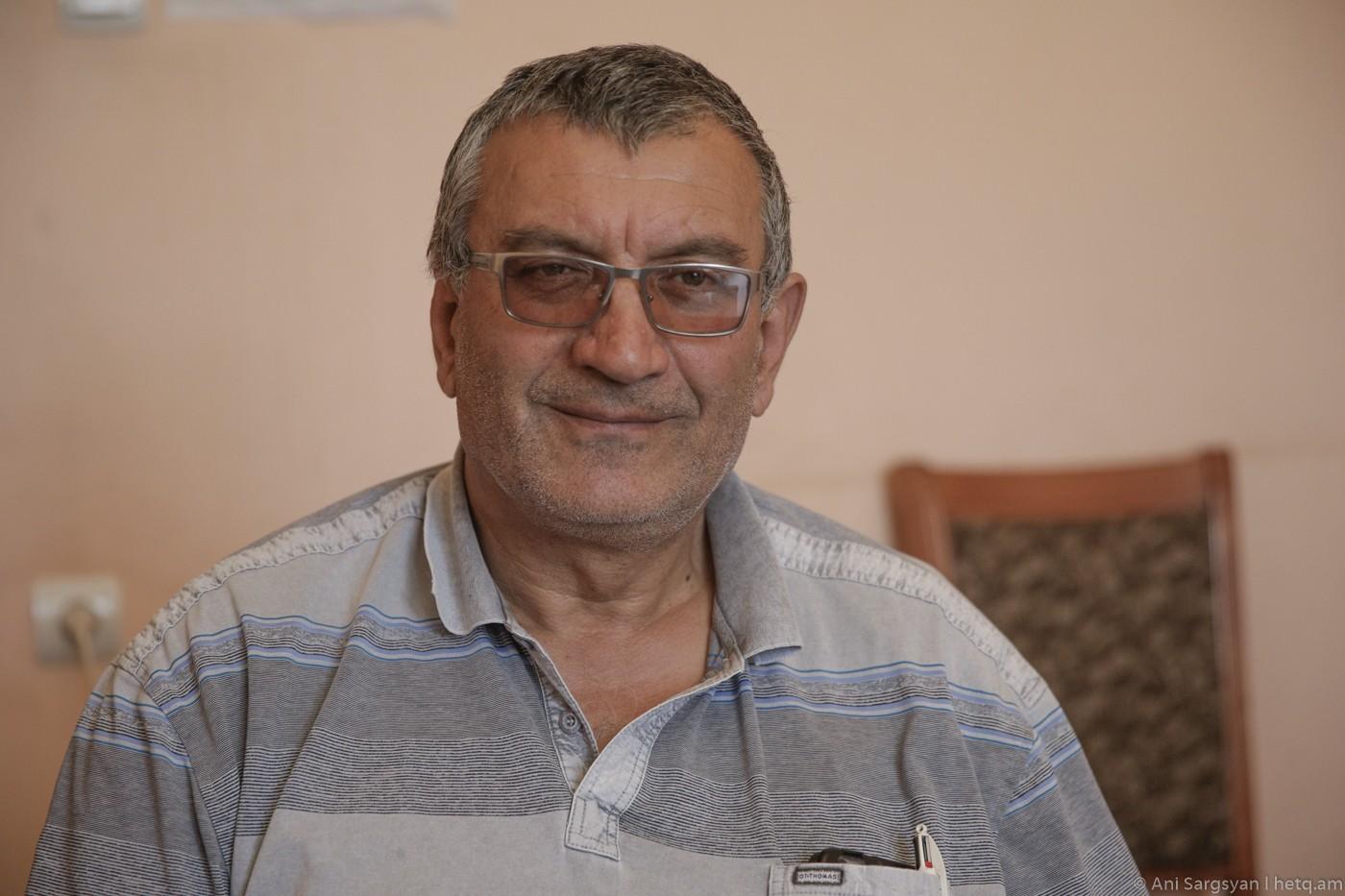 It’s a catch 22 situation in Sotk. The mine has negatively impacted farming and the company responsible fails to adequately compensate area residents.

Only 20-25 people from the village work in the mine. 70% of working-age men in Sotk are unemployed. The community leadership had met with GeoProMining CEO Anatoly Gogotin, who promised to prioritize residents when hiring. This year only two individuals were hired.

The specialists who conducted a 2015 study entitled "Comprehensive Description and Analysis of the Mining Sector in Armenia" concluded that, "Environmental payment rates should be based on rates that are comparable to assessing the real damage to the environment, human health, or the introduction of new, clean or less polluting technologies."

While compensation may be a hundred times less than the actual damage, there is no real calculation of environmental and health damage.

GeoProMining Gold itself orders such soil, water and air pollution testing. The results never deviate from the established safety norms. However, this does not signify that the operation of the mine does not cause significant damage to local communities and human health. 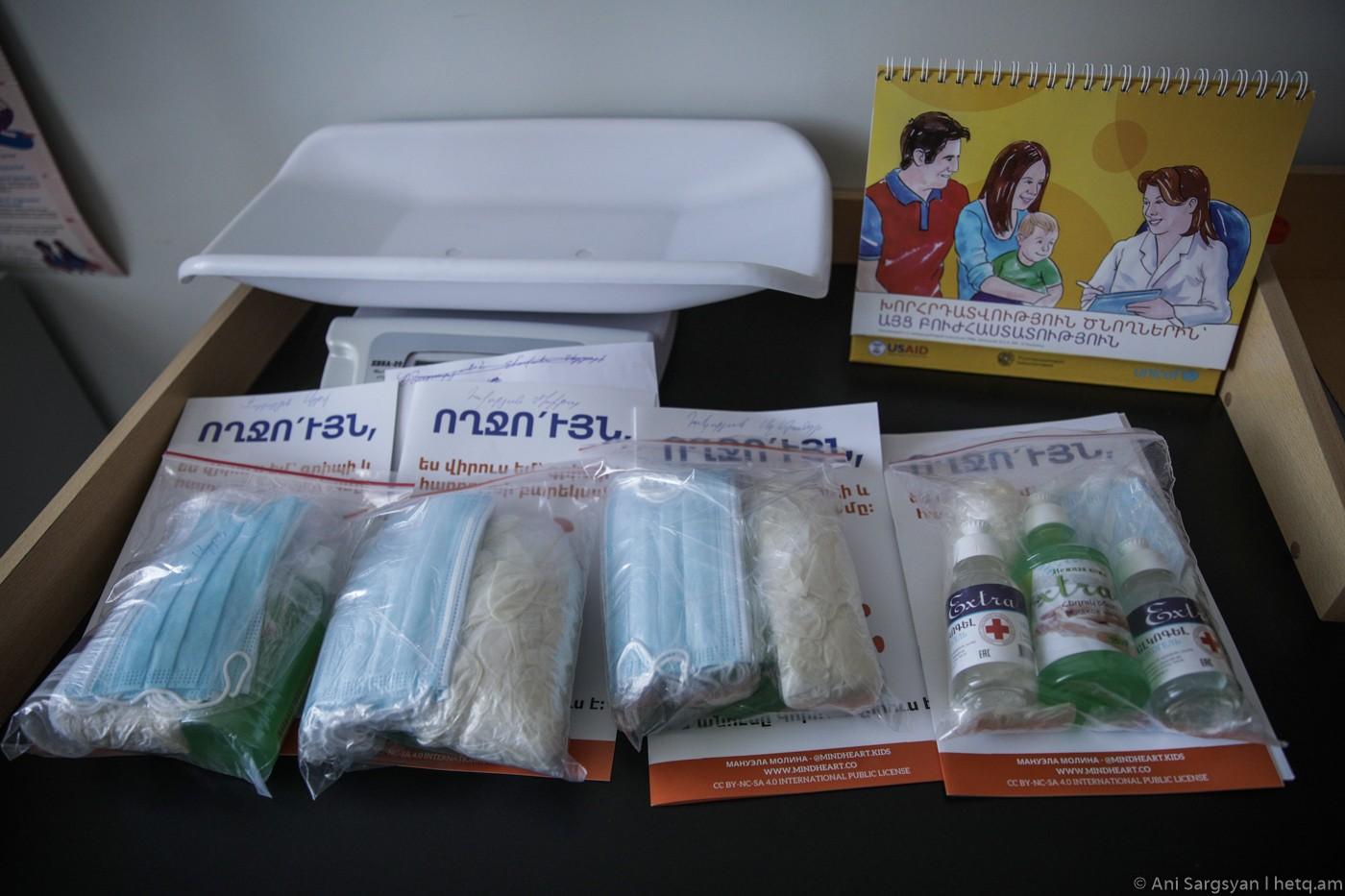 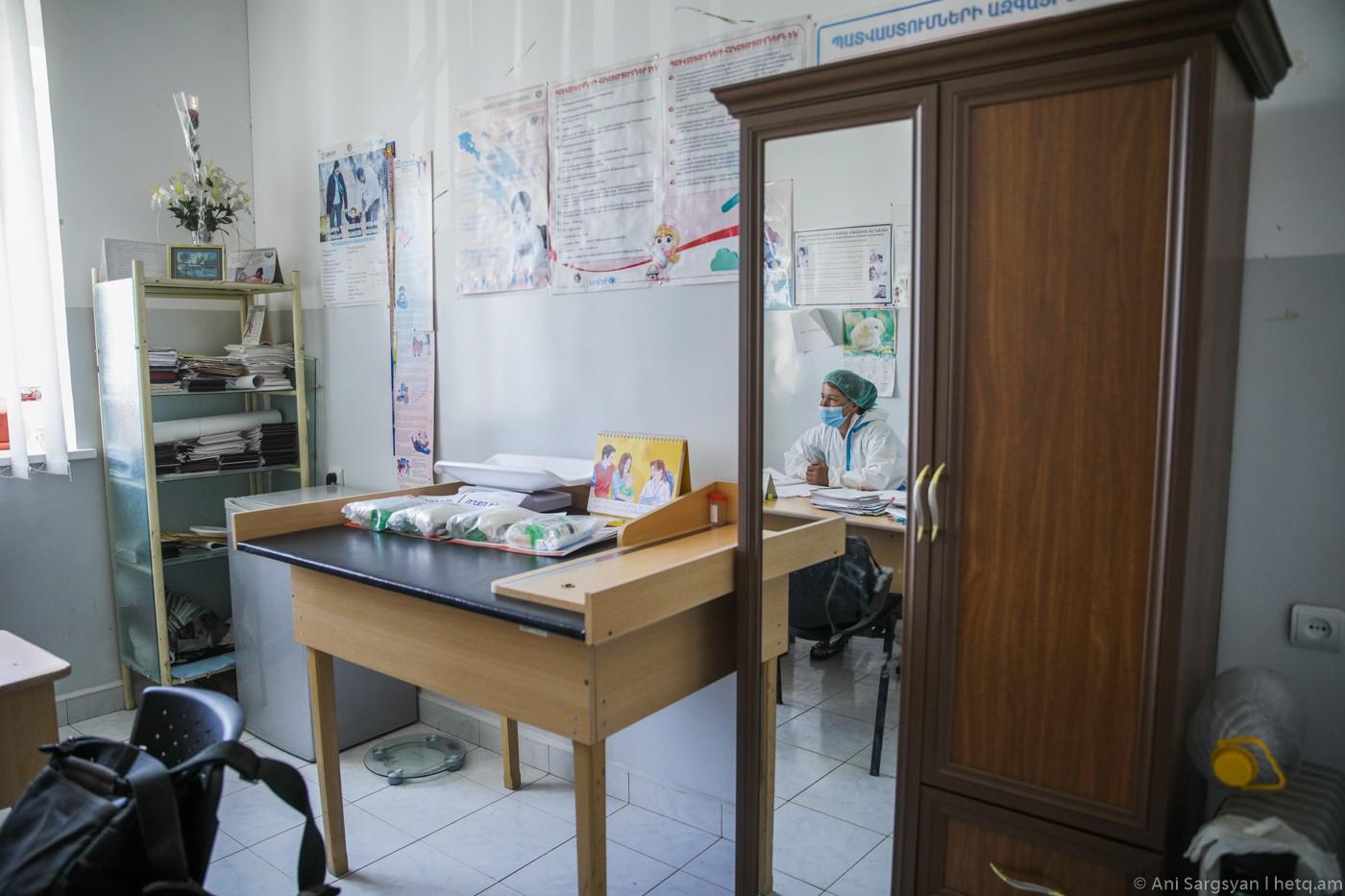 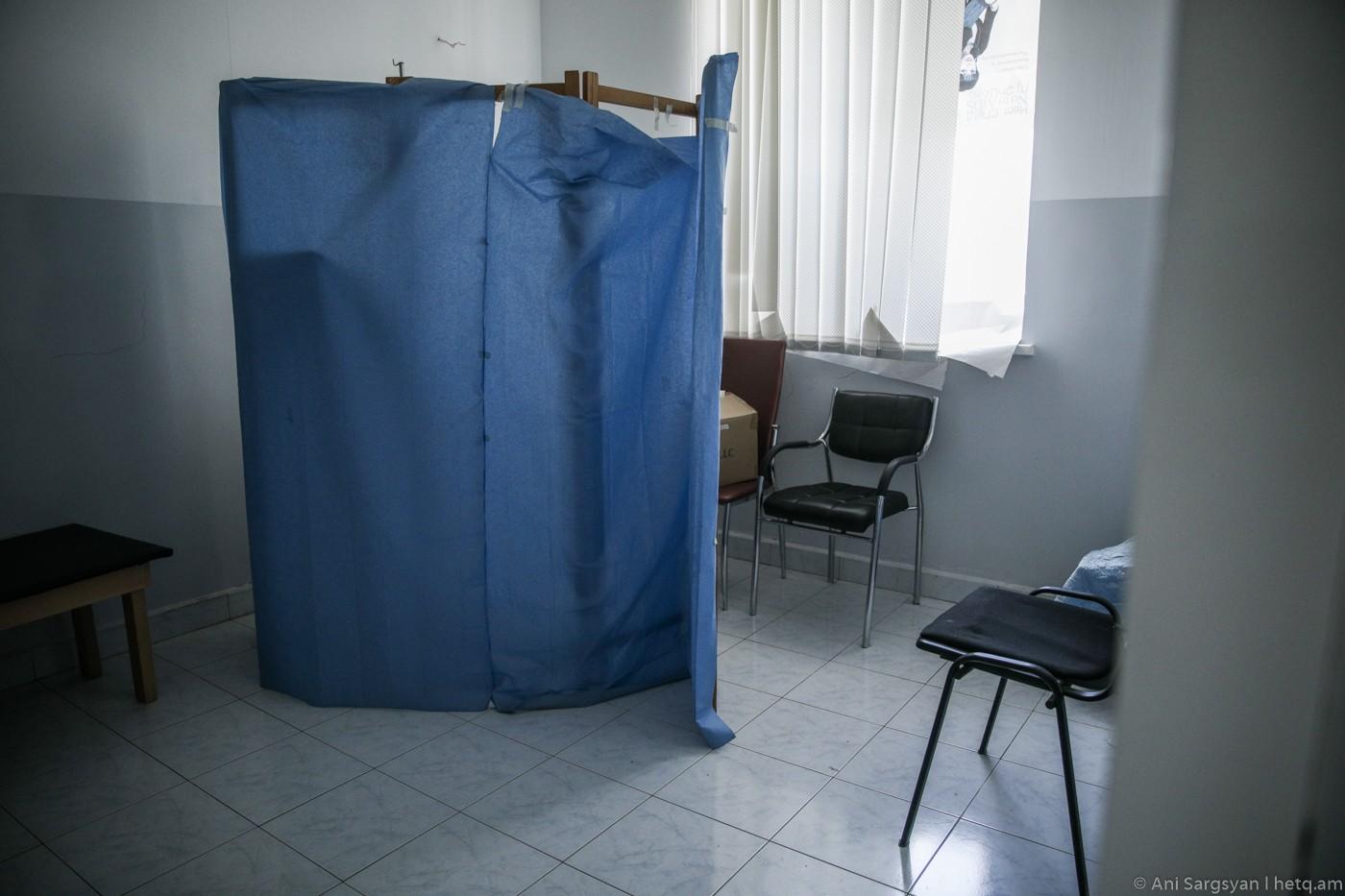 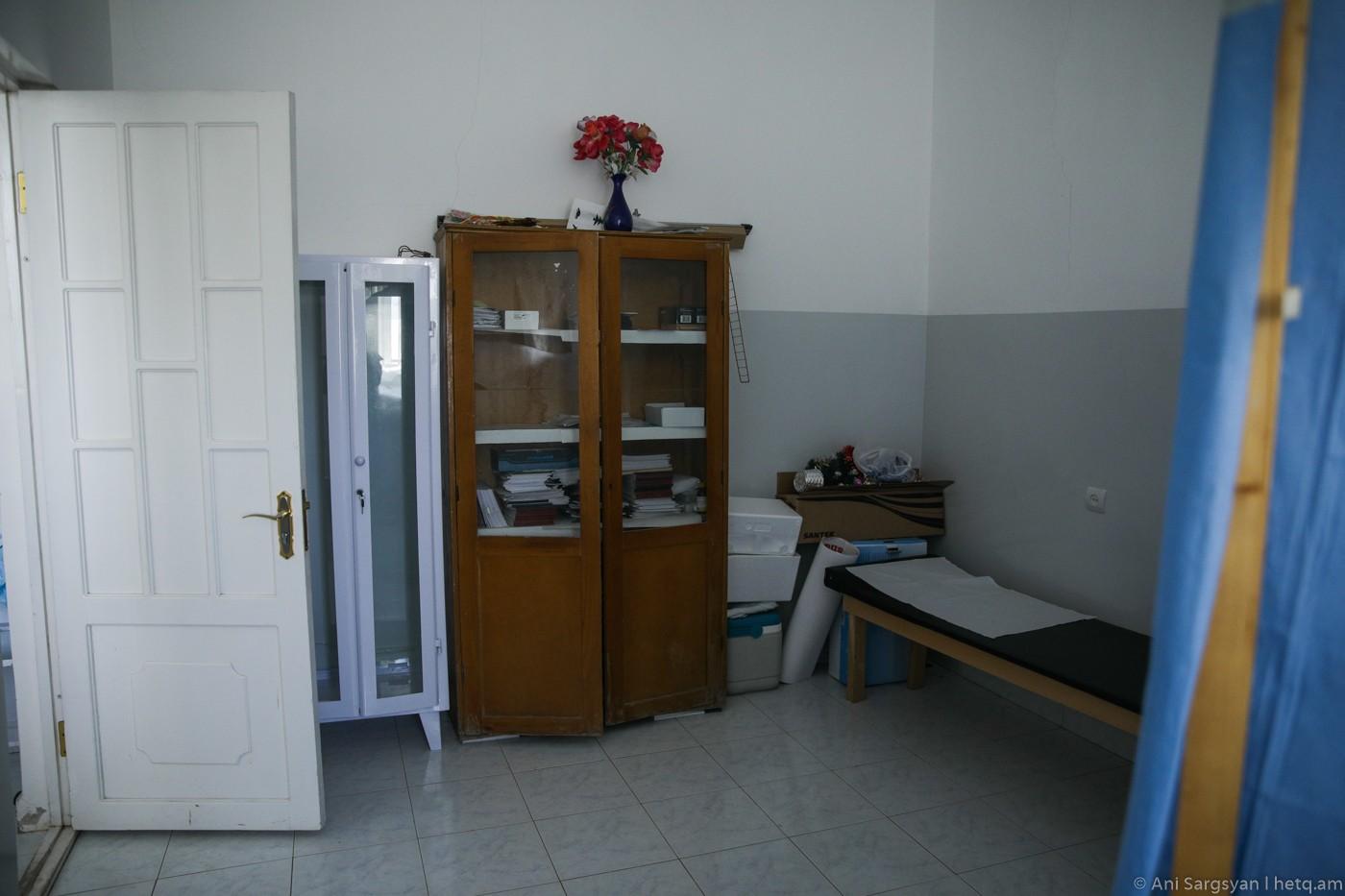 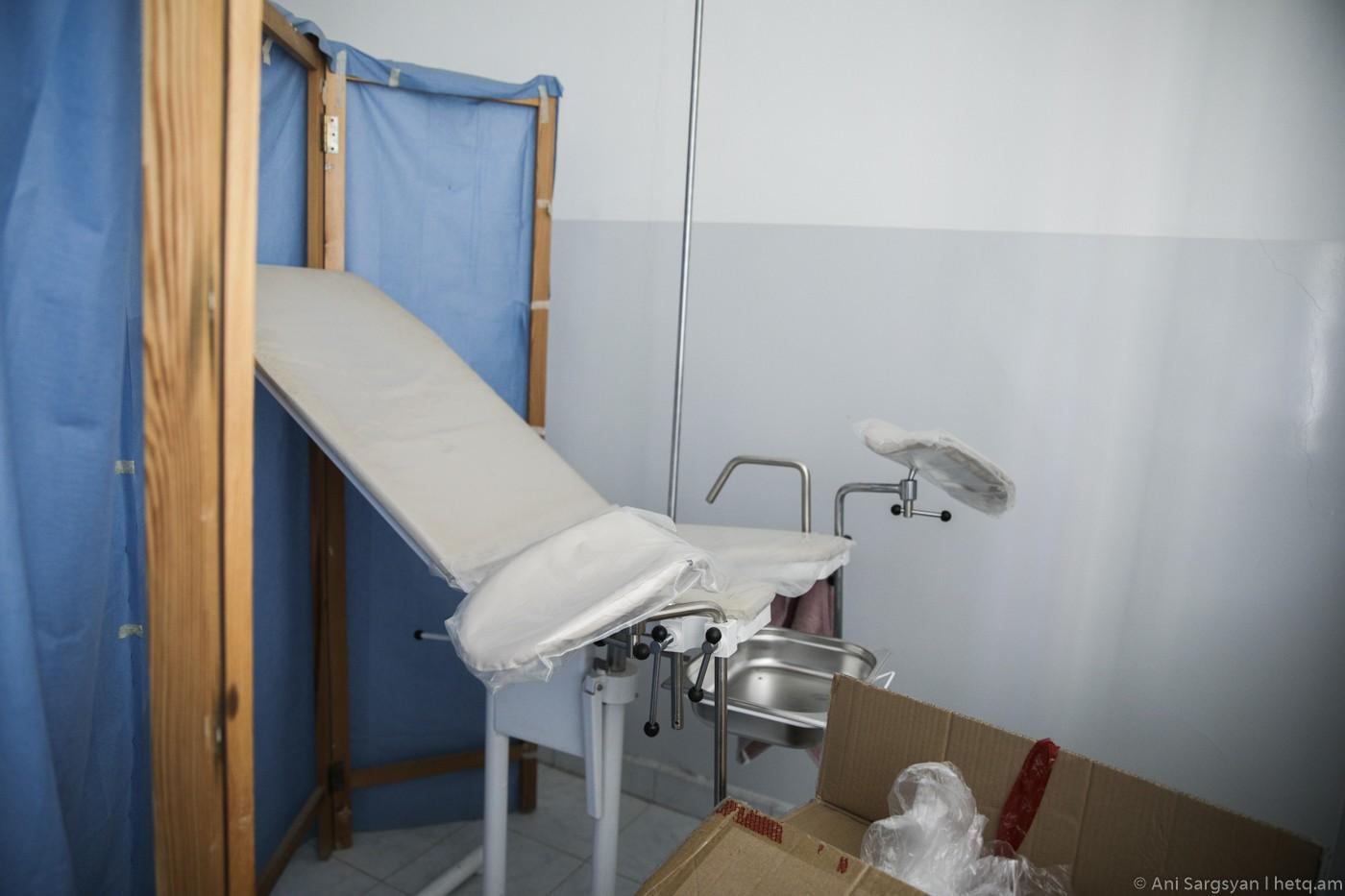 Nurse Shirinyan says the villagers have serious health problems. There are eight children with cerebral palsy in Sotk.  She says the mining company brought in various medical specialists from Yerevan to examine the populace. "There were serious illnesses. They were sent to Yerevan. Nothing has been said about organizing a medical examination this year," says the nurse.

"The list of diseases that are directly or indirectly mostly related to changes in the ecological situation is not clearly defined. Some diseases occur in a short period of time, others over a long time, even months or years later, making it difficult to find causal links. However, according to expert assessments, their occurrence is facilitated by air, water and soil pollution transmitted by crops,” reads the 2015 mining study.”

"In addition to the statutory requirements, the company regularly implements a number of social and charitable programs in the four affected communities," reads a statement issued by GeoProMining Gold.

In an amendment to an October 22, 2014 operator’s contract GeoProMining Gold signed with the Ministry of Energy and Natural Resources, the following socio-economic commitments in Sotk, on behalf of the company, are listed:

"The only significant thing they did for this village during their years of operation was the investment of 30 million drams in 2012 for the gasification of the village. The pipe was taken to the village and left like that. No internal networking was done, and the gas was turned on last year. Seven houses in the village use gas. People do not have the money to bring fuel into the house," says Mayor Avetyan.

The municipality told Hetq that the company, in the past ten years, has paid the school fees for just one student. This year the school was heated. They also promised to heat the kindergarten and the banquet hall, but so far nothing has been done. No fuel or equipment was provided for agricultural work. The company has leveled Sotk inter-community roads with its equipment, and once a year they clean them with graders.

Armenia has been a member of the Extractive Industries Transparency Initiative (EITI) since 2017, according to which, it has obligated GeoProMining Gold LLC to submit a public report on revenues and expenditures. In the 2017 report, the company presented the work done within the framework of the commitments undertaken in the field of socio-economic development of Sotk community, a total of 9.600 million AMD, of which:

The above can be regarded as social assistance, but not as an investment in the economic development of the community.

The village does not have a typical kindergarten building. Three years ago, an area was separated from a school building and turned into a kindergarten. Renovation of the kindergarten and furnishings provided by the World Vision charity. 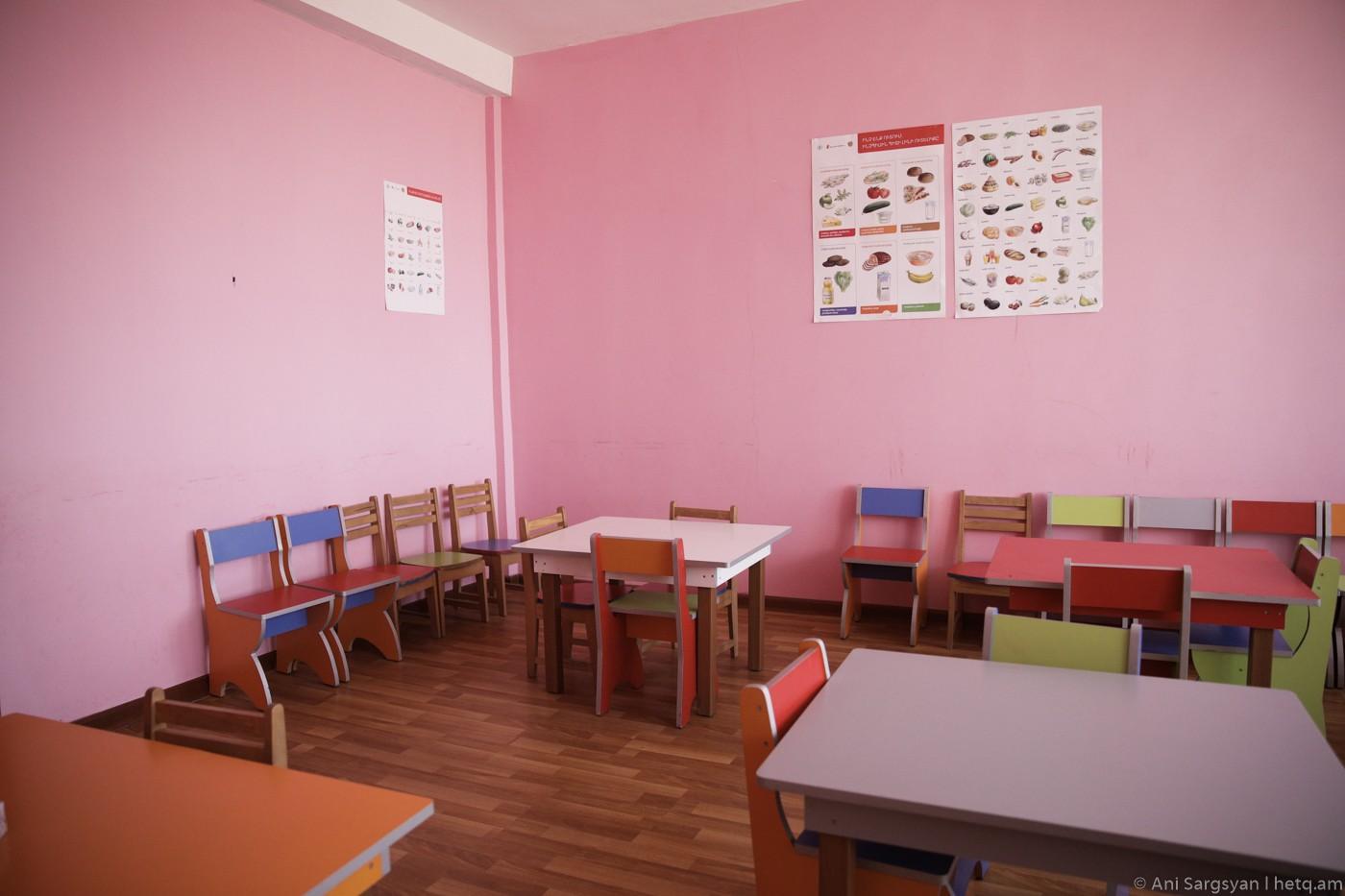 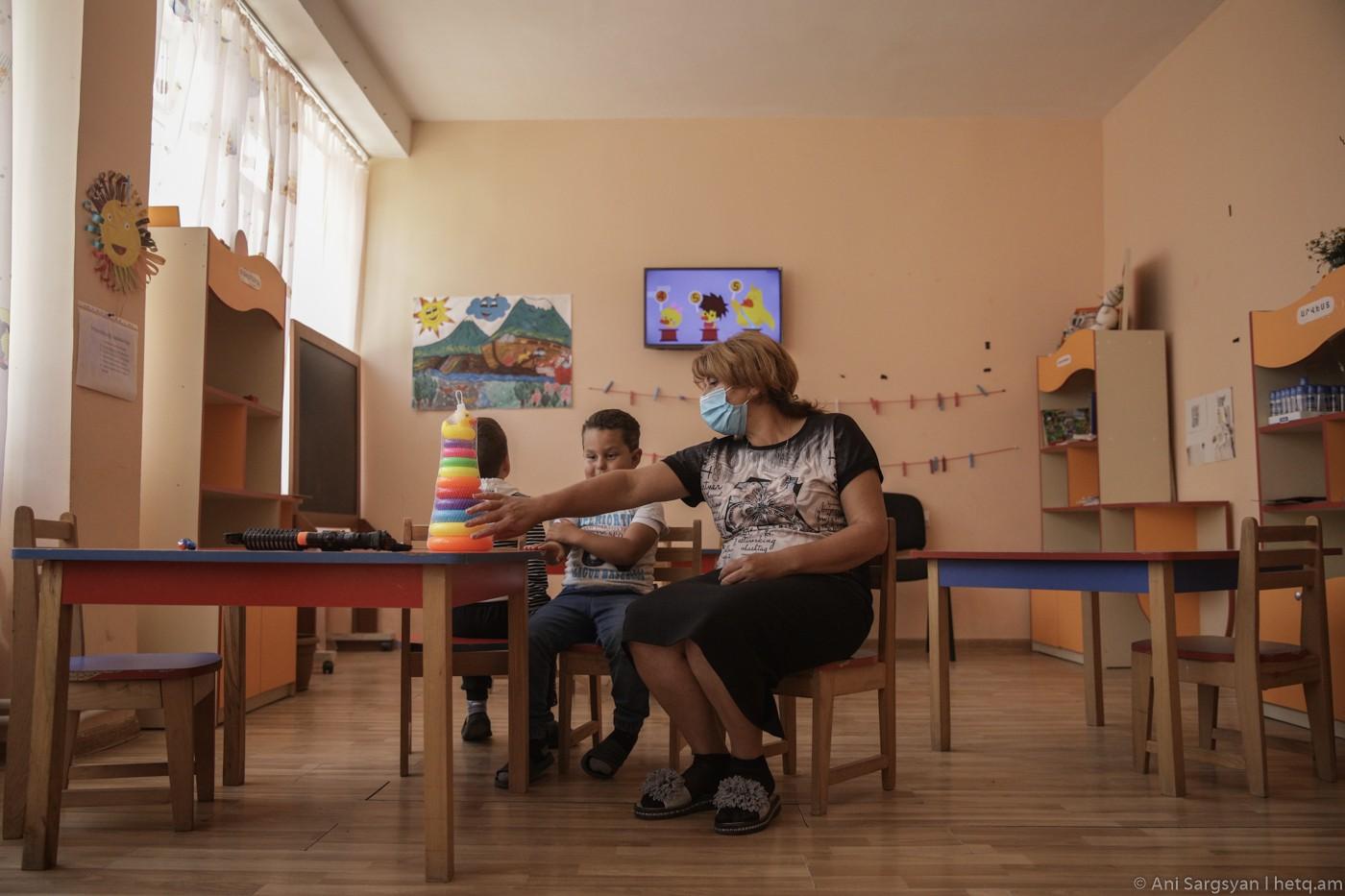 The school can be described as in "tolerable" condition. This year, GeoProMining Gold provided heating, but it needs to be completely renovated and furnished.   Sotk does not have a community/cultural center or a sports school. Last year, there was a private kickboxing club, which even participated in a tournament in Batumi. Members returned with prizes, but the club was later closed. The dispensary does not have its own building. It occupies two small rooms in the municipal building. There are no asphalted street in the village. The list goes on. 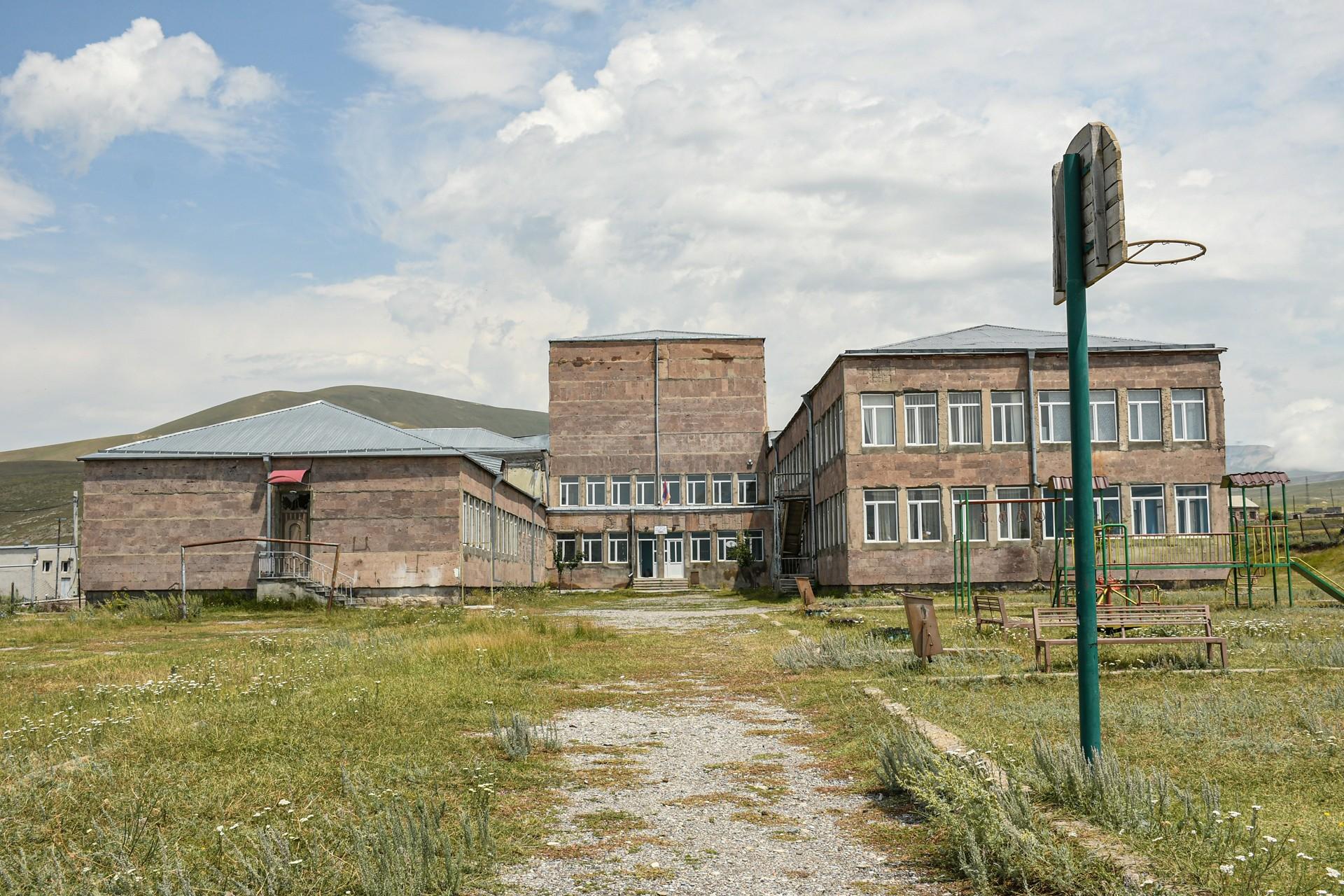 Probably, to create an image of caring and community support, the company points to the annual taxes it pays.

Hakob Avetyan does not deny that the company provides some financial support to Sotk. "It’s difficult to consider it assistance. GeoProMining Gold should make this village prosperous in all realms. They are obligated to do it," says the mayor.

He claims that the issue of population health is not subject to debate.

"The important thing for us is not to get the money, but first to maintain the health of the population. We will not put our lives on the measuring scale. Financial losses can be compensated, but not health ones," he says.

Sarkis 2020-08-31 15:30:38
The author writes that GeoProMining pays 68 million drams in land tax yearly to the Geghamasar community. How much of that money does Sotk get? What does it spend that money on?