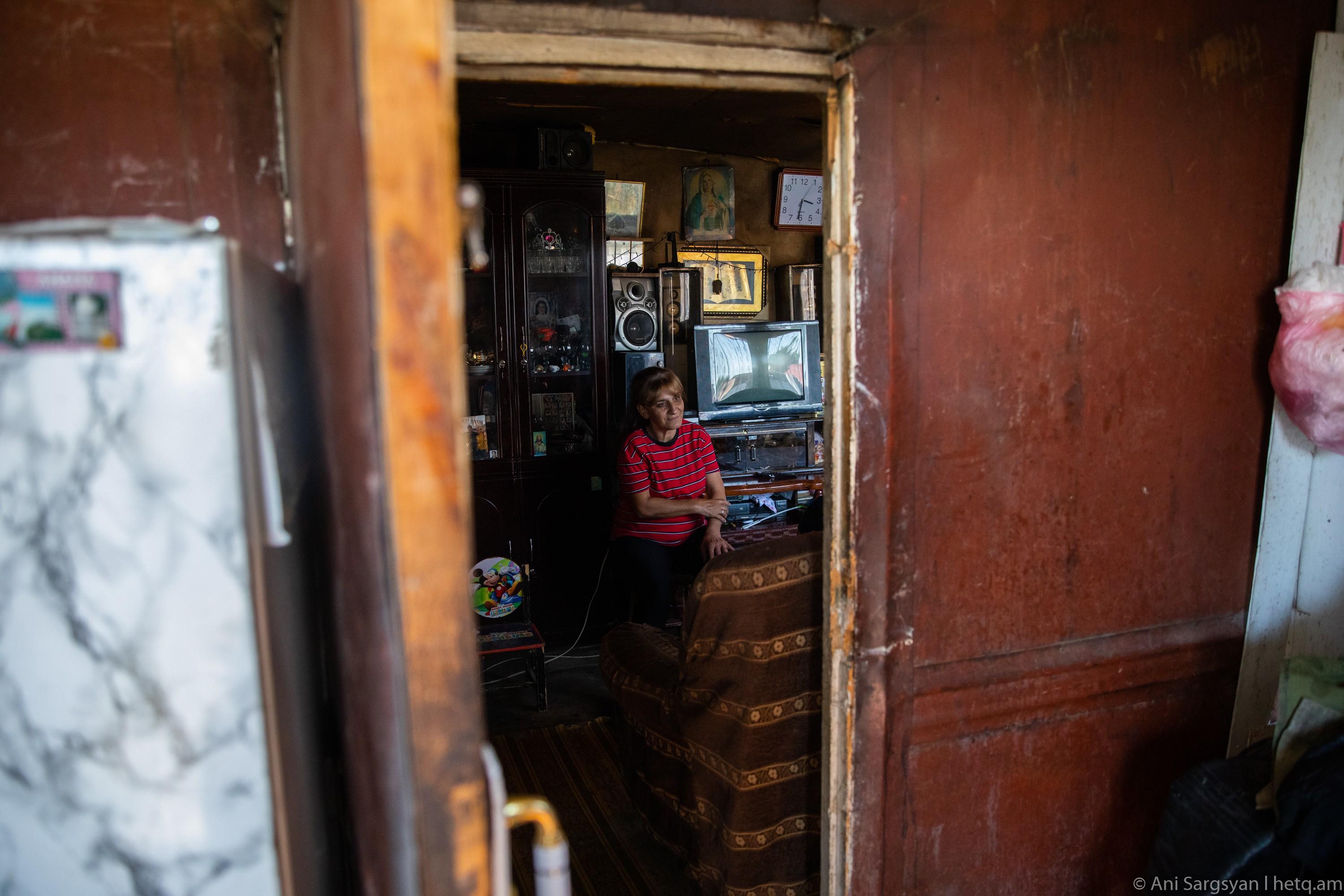 Lala Stepanyan has lived in a ramshackle domik (Russian for “little house”) in Gyumri, Armenia’s second largest city, for the past twenty-six years.

There’s practically no path leading to the retrofitted shipping container, a relic of the homelessness caused by the 1988 Spitak Earthquake. Hundreds were forced to find refuge in these makeshift abodes.

The domik, on the outskirts of Khorenatsi Street, seems cut off from its surroundings.

The gate opens without creaking and we enter the yard. Rocky, the family dog, is tied up and jumps up and starts barking, running in circles. 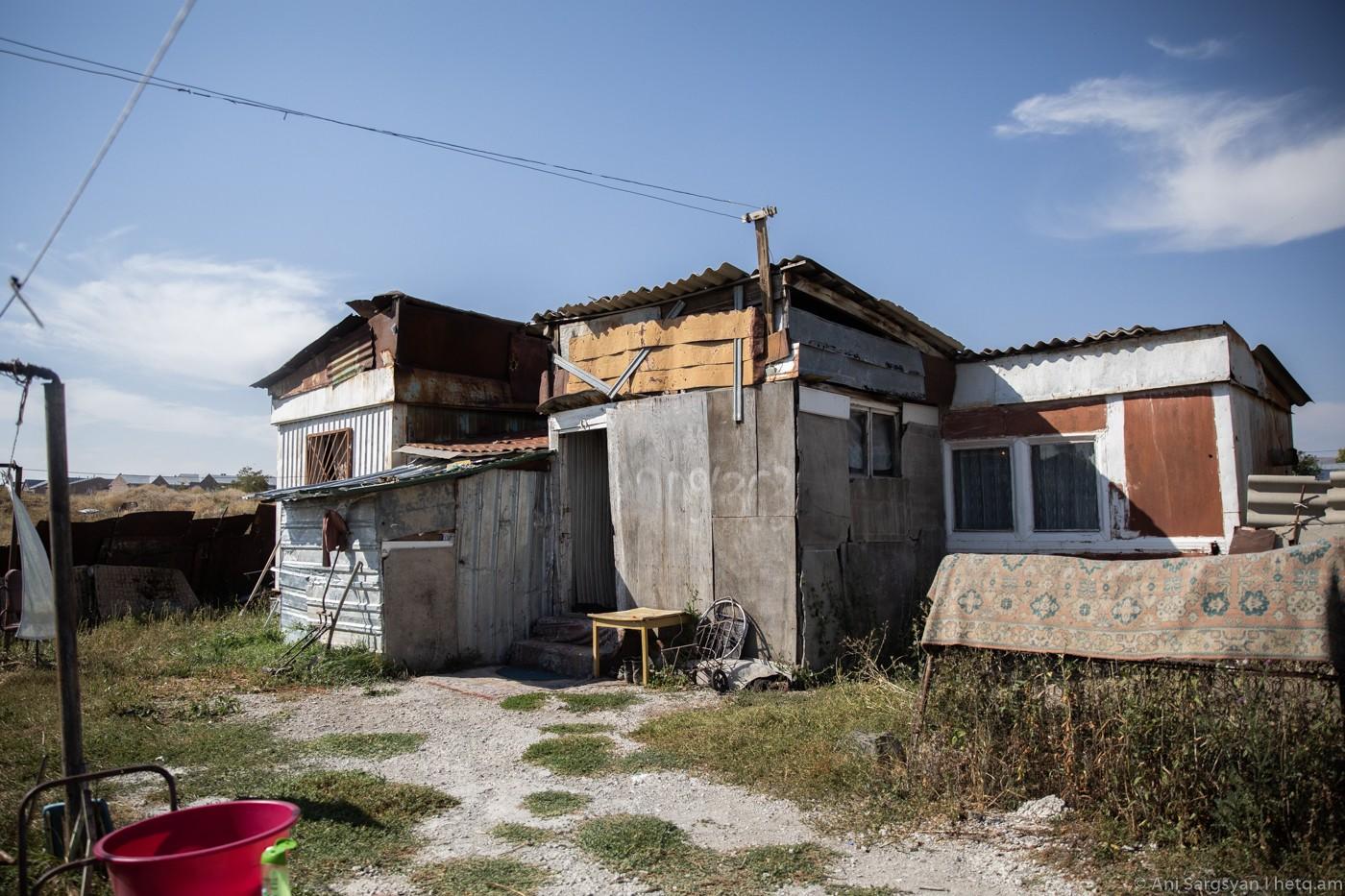 The yard is littered with an assortment of no longer used items. A few plush children’s toys are squeezed into their remains.

Thirteen-year-old Mariam is washing her hair. She quickly puts her wet hair in a bunch and enters the cabin.

54-year-old Lala Stepanyan soon appears by the door. The sun is directly above the house and the air is inside is thick, but the smell of freshly baked pastry buns makes it tolerable.

The cooking is done via a natural gas cannister that sits opposite the door. The table is adorned with newly washed dinnerware. Mrs. Stepanyan covers the buns with a towel and then sits in a chair. 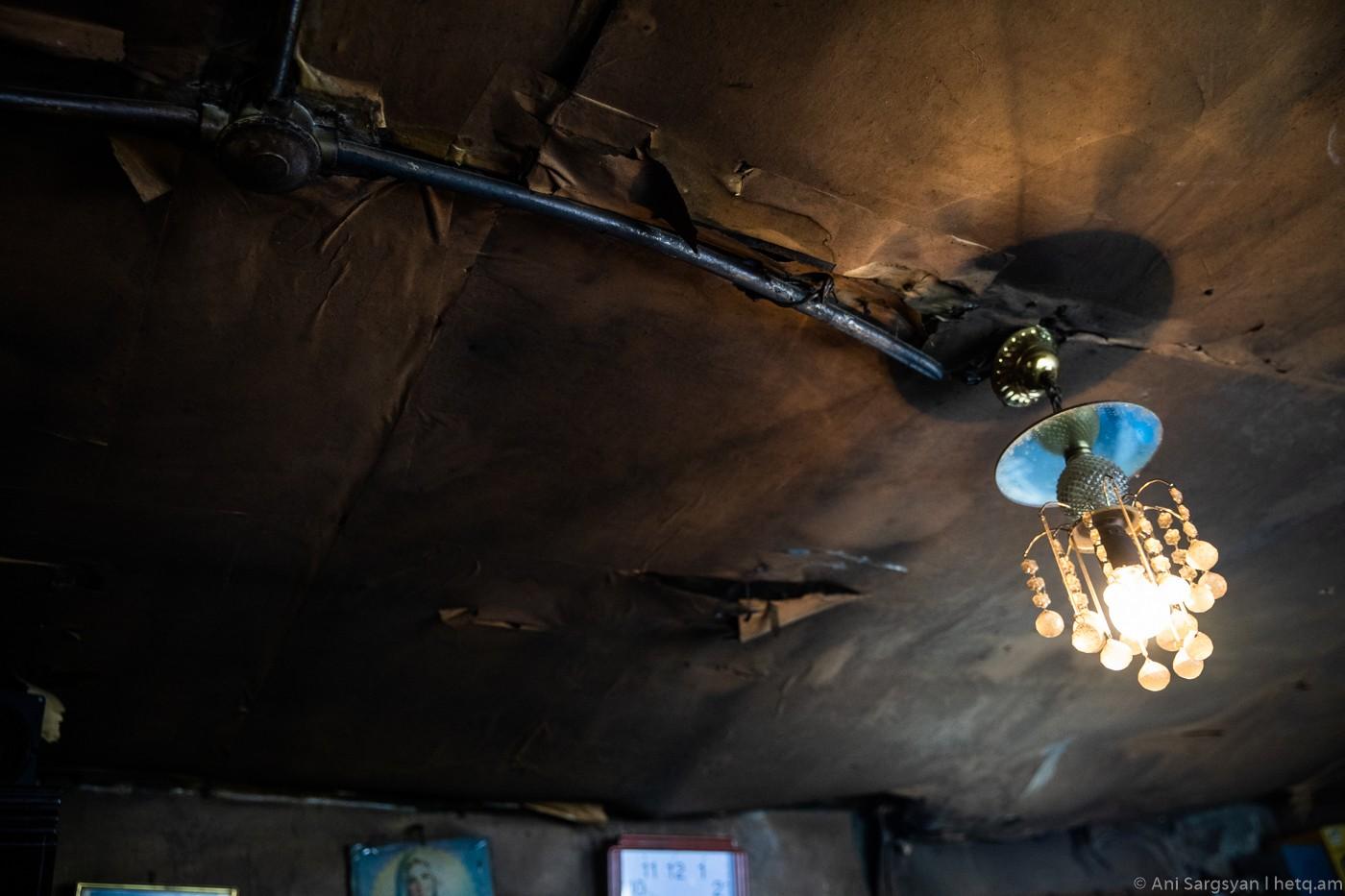 Behind the armoire, one can spot the traces of an electrical fire that damaged on of the walls. The furniture was placed there to hide the burn marks. 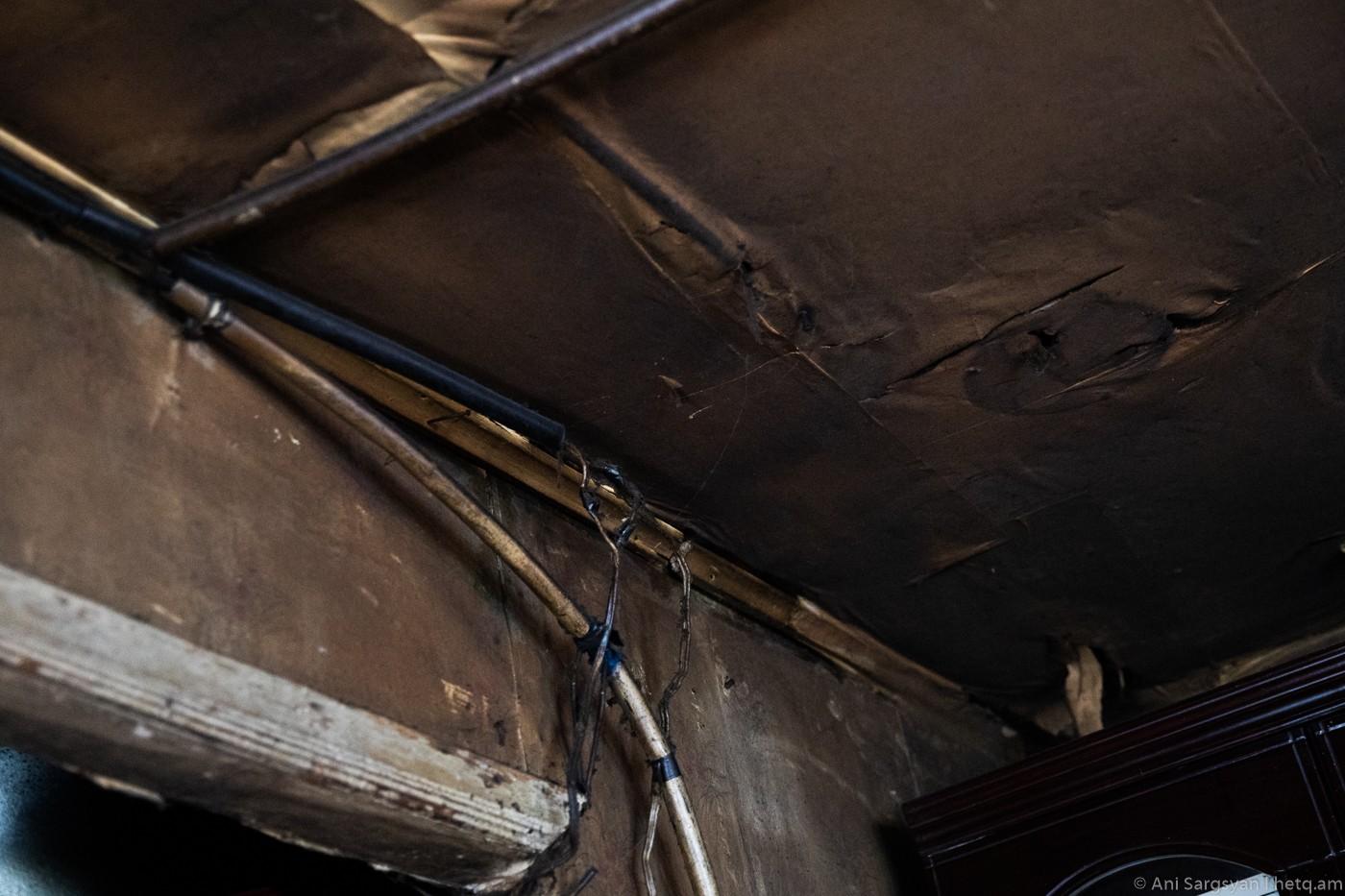 Lala Stepanyan was born in Charentsavan, a town in Armenia’s Kotayk Province. She moved to Gyumri in 1994, after getting married to a local resident. The family has lived in this very cabin ever since. Mrs. Stepanyan’s two sons and two daughters were born here. She has one grandchild, twenty-month-old Davit. Mrs. Stepanyan tells her eldest daughter, Khatoun, to bring her the phone. She shows us the baby’s photos.

The smile on her face goes and comes when the woman talks about the problems of raising a family in such conditions. Her voice trembles a bit and her hands start fidgeting. Before marrying, Mrs. Stepanyan worked in the Charentsavan garment factory for sixteen years.

She says they sewed everything, from medical and workers' uniforms to undergarments. The work took a toll on her eyesight. Her left eye does not see, and the vision of the other is poor. She’s categorized as a third-degree disabled person and receives a 32,000-dram ($66) disability pension monthly from the state.

The family had also received a poverty pension but she says that the government stopped the pension when the eldest son found a job, adding that he barely brought home 30-40 thousand drams a month. The family then took out a loan to buy a car so that their sons could at least drive a taxi to make some much needed cash. This scheme failed and the family was blacklisted by the bank.

Mrs. Stepanyan’s husband is a day laborer. The sons have been working in Russia for several months.

“It’s hard living in the cabin. There are rats. See the holes they chew in the walls? I try to close them, but they still get inside. It because of these rats that my daughter-in-law and the baby live with her parents,” says Mrs. Stepanyan.

She says that some people came around last year and promised to get her a new place to live. Encouraged by the news, they packed up their modest belongings and waited. They’re still waiting. The woman doesn’t remember who they were.

Mrs. Stepanyan tells us that the city plans to build a sports school, named after the Gyumri wrestler Artur Aleksanyan, in the vicinity. 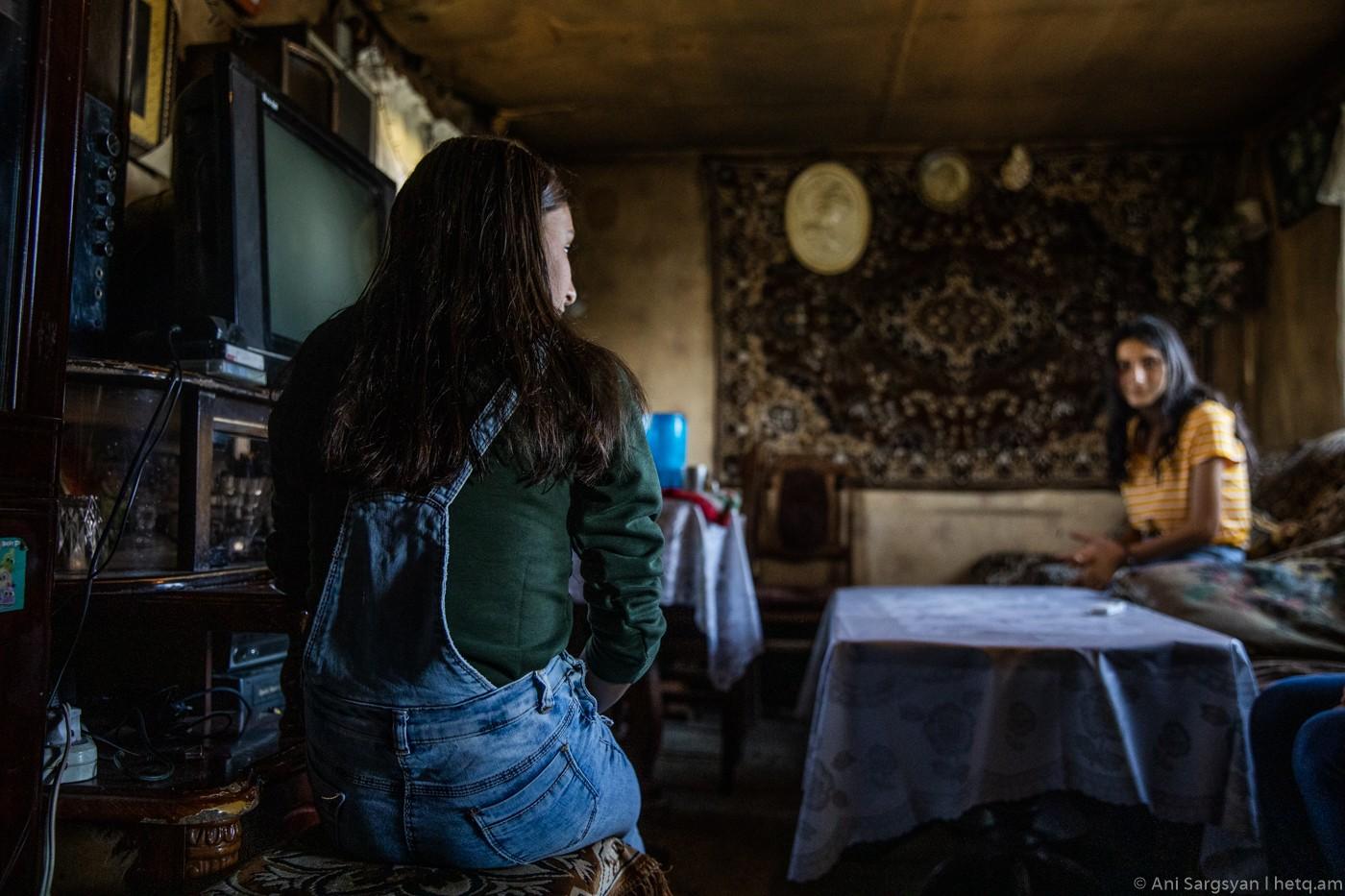 Mariam wants to pursue an acting career and is thinking about applying to the Theatrical Institute after graduating high school.

“What was the last performance you saw?” I ask her to get the conversation going.

“It was the Wedding in the Back. I got choked up in the end,” Mariam replies.

“Right. There are two or three intermissions during the play. It’s a long one,” the mother chimes in. 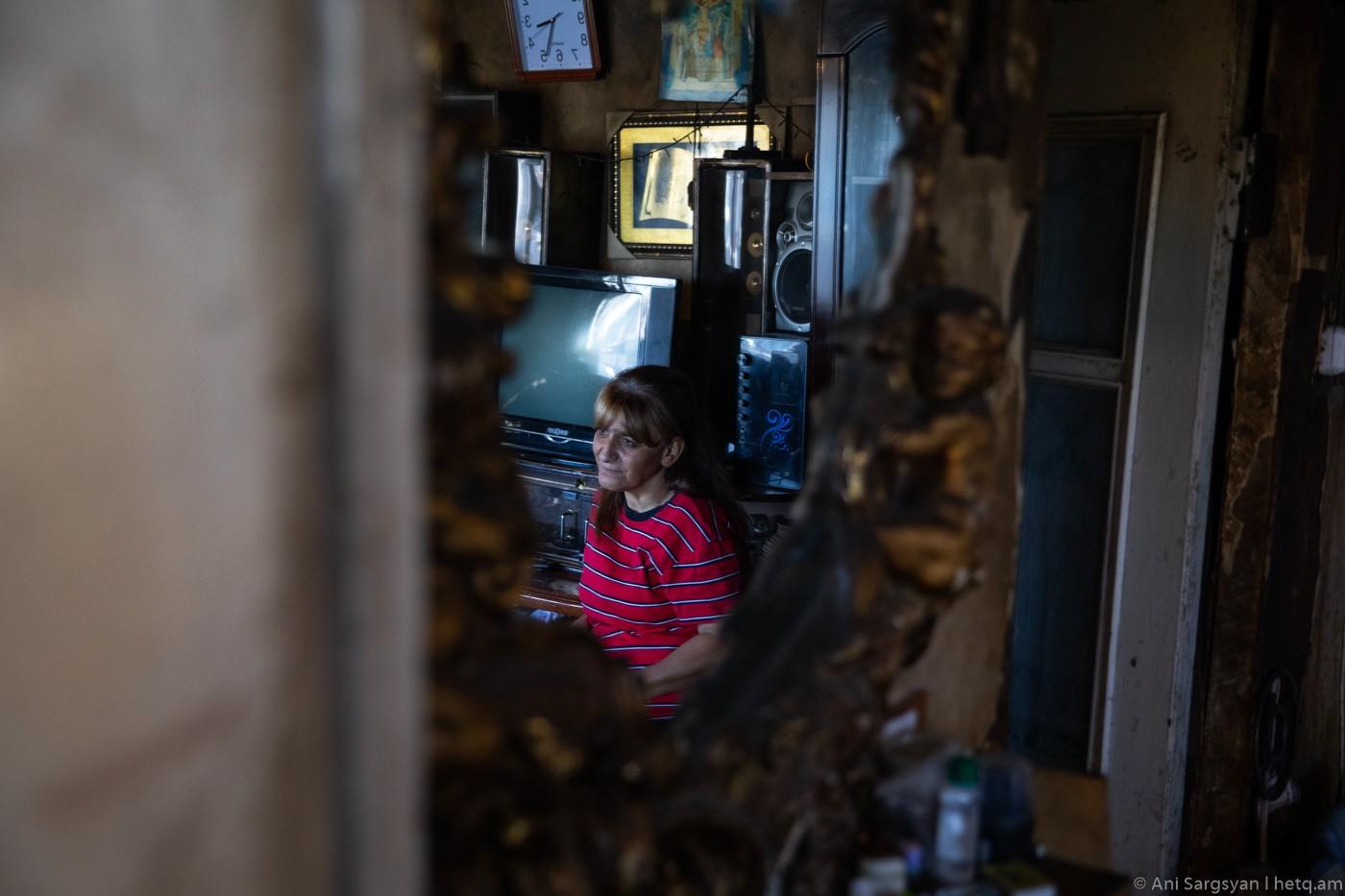 Mariam also attends music school, and there’s a cinnamon-colored piano in the other room for practicing. I ask her to play something and she selects a piece from a class lesson. 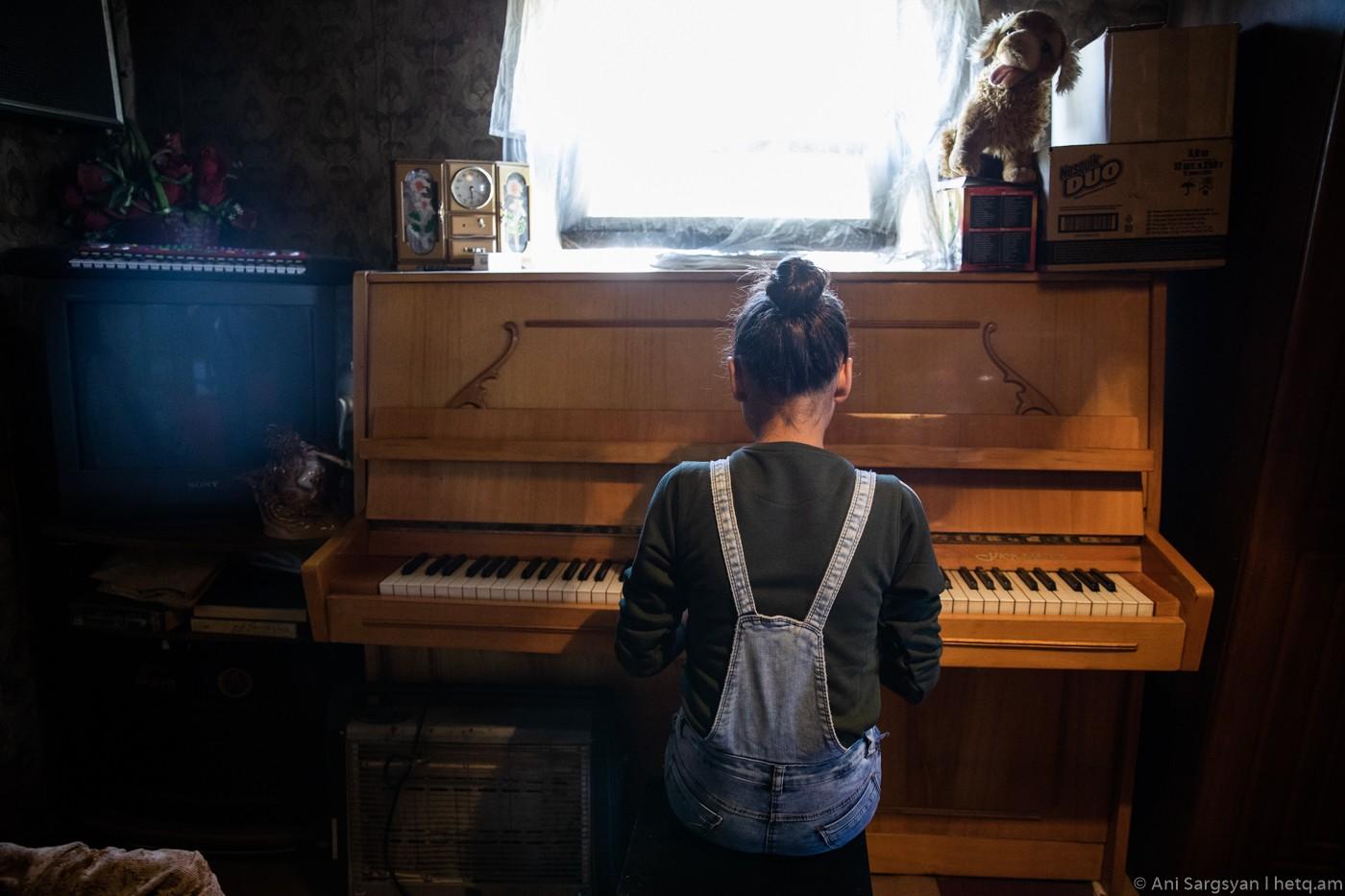 “The piano is a gift from the Shirak Center. When they learnt that Mariam goes to musical school and that we didn’t have a piano, they surprised us,” says Mrs. Stepanyan.

The conversation returns to living in what basically is a cabin made of wood and corrugated tin. There’s no indoor plumbing. Water must be hauled from the yard.

Mrs. Stepanyan says that while she has learnt to adapt after twenty-six years, she still dreams of her own place, a real home. 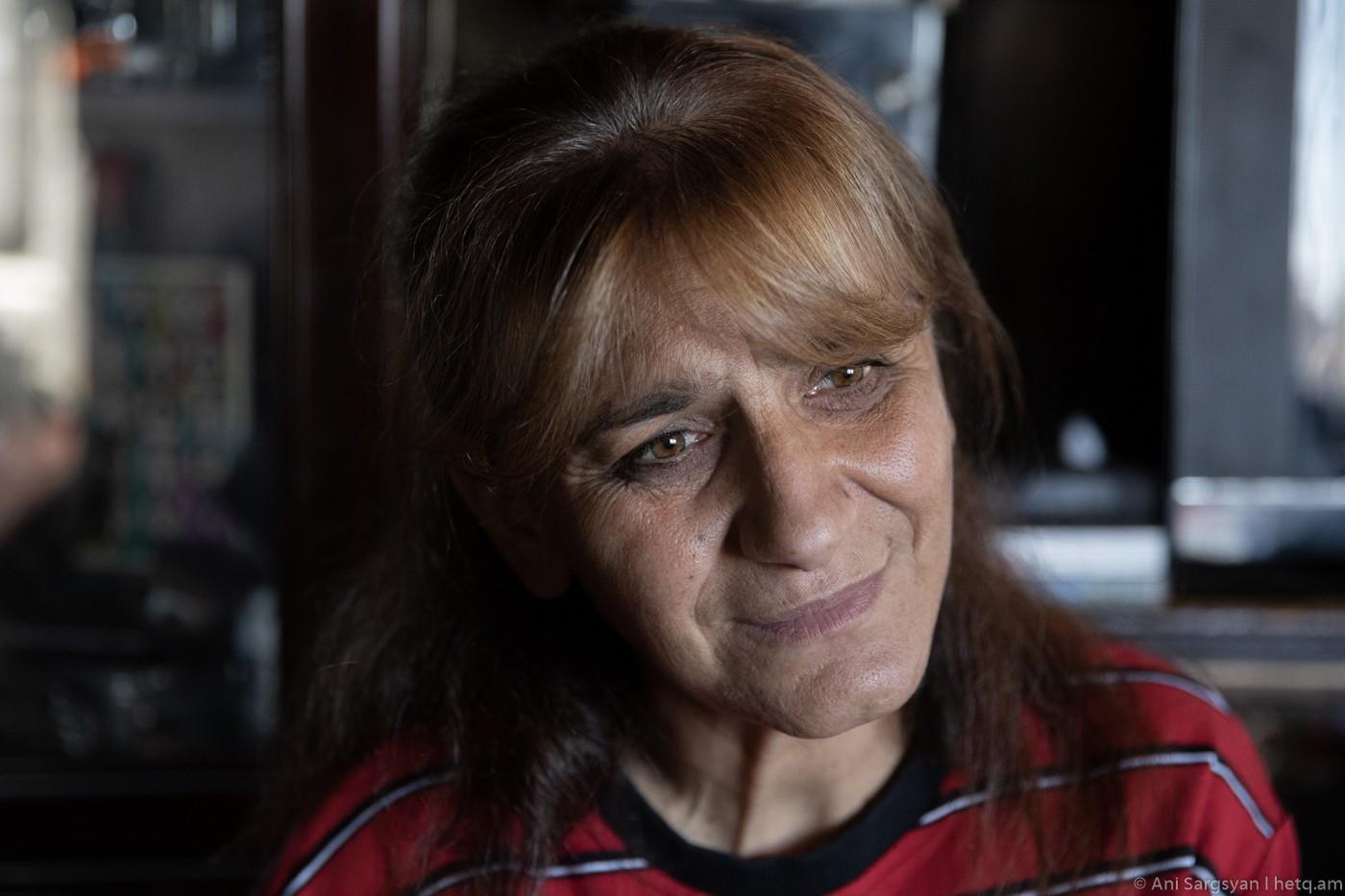 “It’s because of this place that I can’t marry off my youngest son. Where will they live?” asks Mrs. Stepanyan․

alya 2020-09-20 20:44:08
I'm sorry, but I'm more and more shocked about the mentality of such kind of people ! They don't lead their children to catch a profession adapted to their life condition, no ! Theater and dancing !!! How far away from reality ! They should seek to choose an appropriate occupation !! For boys, learn seriously a profession like, housebuilder, woodworker, machinist, electrician , gardener etc... and the girls bakery, sellswoman, nurse, cleaner, dress-tailor aso... I mean something practical and USEFULL in Armenia !! And PLEASE , a SERIOUS and complete professional education with a final exam and diploma , not just some weeks of exercising -- This is mentality of--functionning, successfull western countries -- SO , just COPY it !.... if you ever have the PLEASURE to work --I mean GOOD work