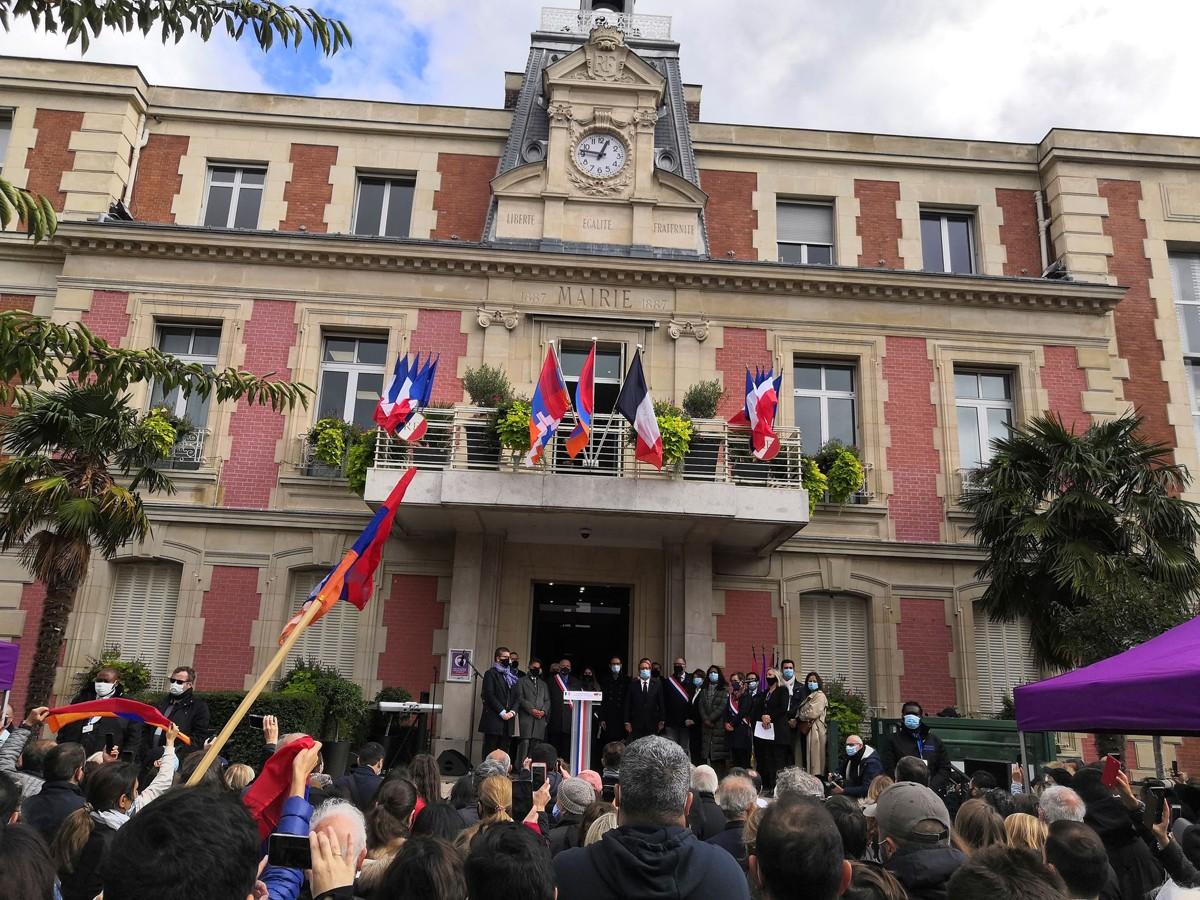 Francois Hollande in Alfortville: "Turkey's presence in NATO must be questioned"

French politicians, including former President Francois Hollande, members of the Council of Armenian Organizations of France and the Armenian community gathered today in Alfortville, near Paris, in solidarity with war-torn Artsakh.

Rally participants condemned the terrorist acts of Azerbaijan against Artsakh.

"When Azerbaijan launched an unprecedented, deadly attack on Artsakh on Sunday, I immediately raised the Armenian flag over the city hall, and today, the Artsakh flag," said Alfortville Mayor Luc Carvounas.

"We demand an immediate ceasefire from Azerbaijan. In this conflict, Turkey is responsible for its military and political assistance to Azerbaijan. The Europeans must stop being naive and realize the danger posed by Turkey. Erdogan's Turkey sends Syrian militants to Artsakh, threatens Greece, blackmails us with refugees. It is time to deprive Turkey of NATO membership. Such a Turkey cannot have a place in the European Union, so I demand to suspend its membership process,” Carvounas declared.

Former French President Francois Hollande (2012-2017) first noted that Alfortville is a symbol of the Armenian Cause, where numerous rallies to recognize the Armenian Genocide have been organized by the French authorities.

Referring to the war unleashed by Azerbaijan against Artsakh on September 27, Hollande noted that it was started by Azerbaijan and with the support and intervention of Turkey, which sent weapons, logistics, Syrian and Libyan militants to Azerbaijan.

"This war can destabilize the region. It is impossible to ignore it. There are powerful states around Armenia, namely Russia and Iran, who may become participants at some point. The line has been crossed by the bombing of civilians. This is not an escalation of the situation, but the destabilization of the whole Caucasus, and France has a special responsibility because it is a member of the Minsk Group, which has been seeking a solution to the conflict for almost thirty years. But now it is not a question of a few hectares, but a war to occupy territory. France, Russia and the United States must impose a ceasefire and reach an end to Turkey's intervention. Otherwise, sanctions should be imposed," said Hollande.

The former French president believes that the UN Security Council must adopt a resolution, obliging all parties to establish a ceasefire.

"Measures must be taken not only against Azerbaijan, but also against Turkey, because its strategy has been implemented. Turkey's presence in NATO must be questioned. How can an alliance, which must act in solidarity in case of aggression, accept or tolerate the aggression of its member towards another state? It is about Greece. It tolerates Turkey, which is occupying part of Syria and attacking our Kurdish ally and invading Libya," Hollande said.

He said Turkey, if not stopped, might seek to interfere in the affairs of the Balkans and called for the mobilization of international public opinion.

“I say it is time for clarifications, and no blackmail should be used against Europe by threatening us with refugees. This is a matter of international security and peace, solidarity with international law. How far can Erdogan go? He seems to be trying our patience. That is why France, Europe and the international community must try to stop the war and find a solution through negotiations. Representatives of Nagorno Karabakh must take part in the peace agreement,” Hollande continued.

French politicians have recently organized a petition demanding that France reconsider its position as a co-chair of the OSCE Minsk Group.

The text of the petition states that on the morning of September 27, Azerbaijan started a war in Nagorno Karabakh, targeting cities and civilians.

"This area is the cradle of Armenian civilization," the text says, adding that Armenians lived in the area and fought for their freedom. The fire was put out in 1994, but the conflict is still unresolved.

The text mentions the role of the OSCE Minsk Group, in which France has shown a neutral position and has worked for several decades to find a solution to the Karabakh conflict that would primarily ensure the peace and security of the people. In 2020, it is necessary to reconsider that strategy after recent events, the text reads.

The text mentions that the Azerbaijani Army, for several consecutive days since July 12 of this year, has been attacking Armenia, not Nagorno Karabakh, whose borders are recognized by the international community. The signatories of the petition also consider that the attack was directed against France, a friend of Armenia, and that France must immediately change its neutral stance.

The text of the statement also refers to Turkey's participation in the ongoing fighting.

"We believe that the French diplomacy should reconsider its strategy on the Nagorno-Karabakh conflict, strongly condemning the aggression of Azerbaijan and demanding an immediate end to the violence. If not, it should provide massive support to the Nagorno-Karabakh authorities, which requires recognition of Karabakh," the statement reads.

Robert 2020-10-07 11:02:22
Questioned? Are you guys so blind? How about expelling the criminals period or is it just talk. If you have the GUTS, EXPEL tturkey without any pre conditions. Otherwise it is another talk show with the convenience of not doing anything.