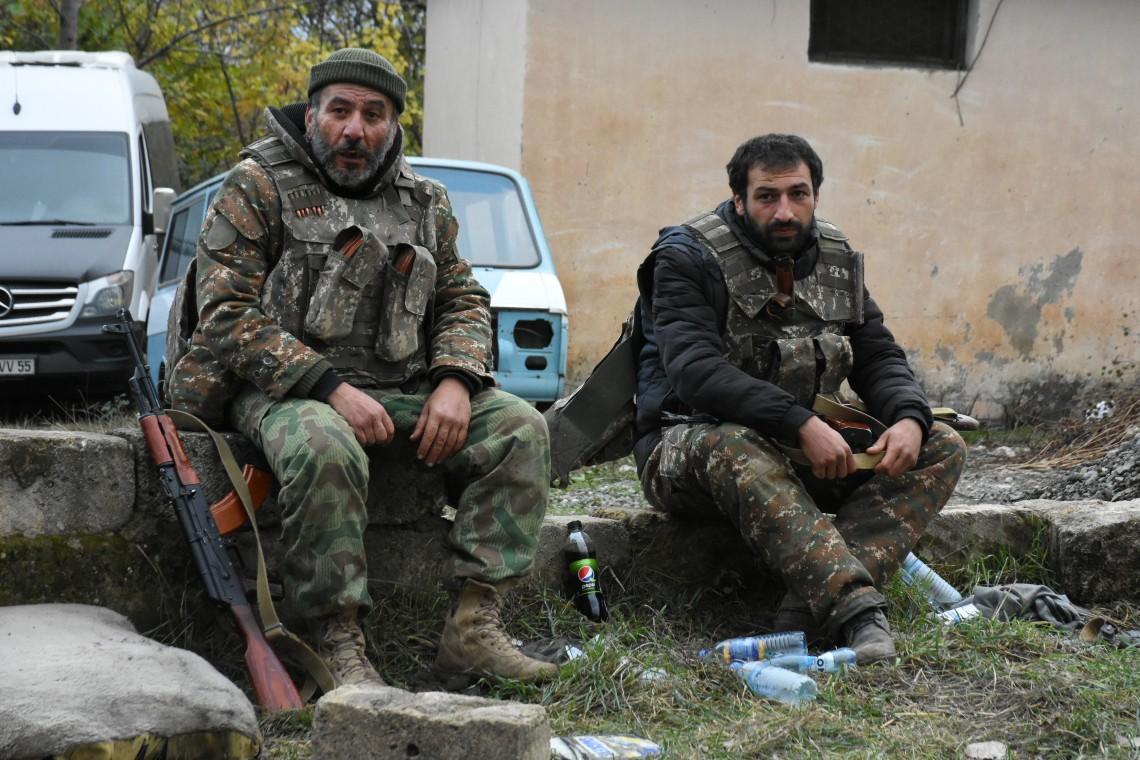 Before reaching Sarushen, we meet volunteers on the way who continue to man their positions.

One of them asks. "If we are removed, who will hold these positions? The Turks are in front of me.”

I do not know what will happen to our positions. Who will protect the borders of Artsakh? What will the Defense Army do?

Most of the population of Artsakh serves or works in the army. What are they going to do? There are military units that have stated that they will not leave their positions, because if they leave those positions Azerbaijani armed forces will immediately take over. What will happen to the heights of Mt. Mrav in the north? No one has the answers to these questions.

It was a harsh day. Harsh like in the days of war, although there is no sound of gunfire or fire artillery.

In the morning we meet with Artsakh Human Rights Defender Artak Beglaryan in the square. The mother of a missing soldier had seen him giving an interview and was waiting for it to finish.

"Artak dear, only you can help. I appealed to everyone, my hope is you," the woman cried.

Artak listened to the woman for a long time. He’s one of the few local officials who listens to everyone and tries to help. Most of the questions he’s asked, however, do not concern the agency he heads. In fact, Artak is one of the only officials in Artsakh who was working during the war and still is.

None of the government departments could tell us whether the road to Karvatchar will be closed on November 15 or not. If closed, what will happen to the non-Artsakh residents left here. How will they get back to Armenia? We try to get answers from Yerevan. Again, there is no clear answer.

We head towards Askeran. Noticing a few people in one of the pomegranate orchards, we stop the car.  We walk, somewhat fearfully, between the bent pomegranate branches. The weather has been cold in recent days, and the pomegranates are almost completely open. People in military uniforms pick a few still unopened pomegranates. We exchange a few words. They are from Khanabad.

We then head to Aghdam. We meet Russian peacekeepers setting up a checkpoint. The road to Martakert is now open. It had been closed in the first days of the war because of the shelling. There are traces of the shelling on the roadsides and in the fields. There are holes everywhere.

We meet people walking in the streets of the town. A woman is sweeping the street.

I talk to a soldier near the military base. An officer approaches and asks if it’s true that the soldiers will be shipped to Armenia. The army knows nothing.

We return to Stepanakert and head to Shushi again. On the way to Shushi, there are several dozen vehicles at the peacekeepers' base. Relatives of fallen soldiers are waiting for ambulances to return from Shushi with the bodies.

We are head to Karmi Shuka. Another checkpoint on the road to Shushi. This is how it is on the roads in Artsakh - peacekeepers’ vehicles and military equipment. Everyone is stopped and questioned at the checkpoints, Yesterday, we were asked if there were weapons in the car.

There are many Russian journalists at the base, filming and conversing with the soldiers.

We were warned not to film as we passed, but we did.

We reach the road leading to the Karmir Shuka. We meet Russian peacekeepers in a couple of places. Our soldiers are manning their positions here as well.

We return to Stepanakert to clarify whether the Karvatchar-Vardenis road will be closed. Again, no one knows.

We head to Yerevan to see for ourselves. There are hundreds of trucks and cars on the road. There are trucks loaded with timber. People have dismantled their houses. Hundreds of cars also returned to Artsakh yesterday. There were several buses full of women and children.

We cross the Artsakh-Armenia border at about 11 pm. We still don’t know if the road will be closed.

It seems that the Russians are making all such decisions and only announcing them after the fact.