It is difficult to overestimate the role of the Stepanakert airport in the first Artsakh war.

In the early 1990s, Yak-40 aircraft and Mi-8 helicopters provided air communication between Armenia and Artsakh. The "air bridge" played a very important role, especially before the opening of the Lachin (Berdzor) corridor. Flights were operated not only to Stepanakert, but also to various settlements and terminals in the former Nagorno-Karabakh Autonomous Oblast, the Shahumyan region and the Getashen subregion.

Under fire from the ground and targeted by Azerbaijani combat aircraft in the air, Armenian pilots transported the bodies of victims, the wounded, women and children, the elderly, as well as various humanitarian aid to Artsakh, including food and fuel, as well as weapons and ammunition and freedom fighters. The flights were carried out by the pilots and aircraft of the 2nd Yerevan Detachment based at Yerevan's Erebuni Airport.

"The flights were carried out in unfavorable weather and geographical conditions, at the lowest possible altitude and with intensive maneuvers," writes Dmitry Atbashyan, former head of the Armenian Civil Aviation Department (1971-1987), in his unpublished book on aviation in Armenia. Transportation of large containers of fuel for combat equipment by Yak-40 passenger planes was a problem. The containers moved back and forth, which disrupted the aircraft's center of gravity making a difficult situation worse. Nevertheless, the Armenian pilots managed to fly.

The main bases for flights to Artsakh in Armenia were Erebuni, Sisian and Goris airports, although there were also flights from other airports, particularly from Gavar and Vardenis.

"Today, everyone agrees that without the planes and helicopters of the Armenian Civil Aviation Department, without the airports of Stepanakert, Goris and Sisian, we would have lost the Artsakh war," the famous aviator writes in his book, adding that this fact speaks about how important it is for any sovereign state to have its own civil aviation, a developed material and technical base and, primarily, national aviation personnel.

In this regard, Atbashyan emphasizes that foreign pilots would not fly for the benefit of the Armenian side in the conditions that arose during the evacuation of Armenians from Azerbaijan and the hostilities in Artsakh. The experienced aviator writes that in the first war the Azerbaijani Civil Aviation Department faced such a problem. "With almost no national staff, they had to hire mercenaries there with large sums of money, who, however, tried to avoid the slightest risk. And that is why the Azerbaijanis lost in the silent competition of the two neighboring departments.”

As noted, the flights to Artsakh, and from there to Armenia, were carried out in rather dangerous conditions, first of all taking into account the enemy factor. Here are some such cases that were directly related to Stepanakert airport.

On March 27, 1992, a Yak-40 passenger plane flying from Stepanakert to Yerevan, commanded by Mikael Andreasyan, was targeted by Azerbaijani aircraft. The plane was fired on from the Strela-2 anti-aircraft missile system, which, fortunately, did not explode, instead damaging one of the three engines of the Yak-40. The crew of the plane had to turn off the engine and managed to land successfully at Erebuni Airport. According to available data, there were 30 passengers and 4 crew members on board. There were no casualties.

After Armenian independence, the aircraft of the national airline Armenian Airlines (AAL) at Erebuni Airport was assumed by Ararat Avia, a company established on the basis of AAL. Another of the latter's Yak-40s (still with Soviet SSR-87532 registration) was attacked on May 9, 1992. 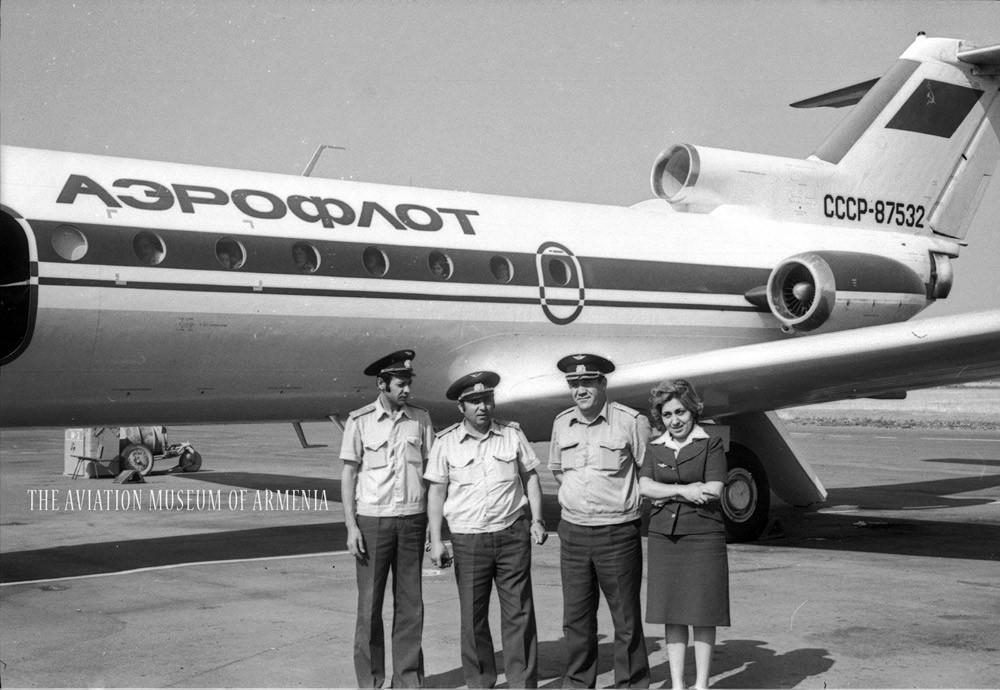 The plane flying from Stepanakert to Yerevan was targeted by an Azerbaijani Su-25 combat plane while approaching the Kelbajar region. The latter opened fire on a passenger plane, after which the right wing of the Yak-40 started to burn, and the cockpit and the cabin began to fill with smoke. Flight engineer Artavazd Sahakyan had to seal the emergency exits, and pilots Harutyun Davtyan and Mikael Andreasyan managed to land the plane at Sisian Airport. 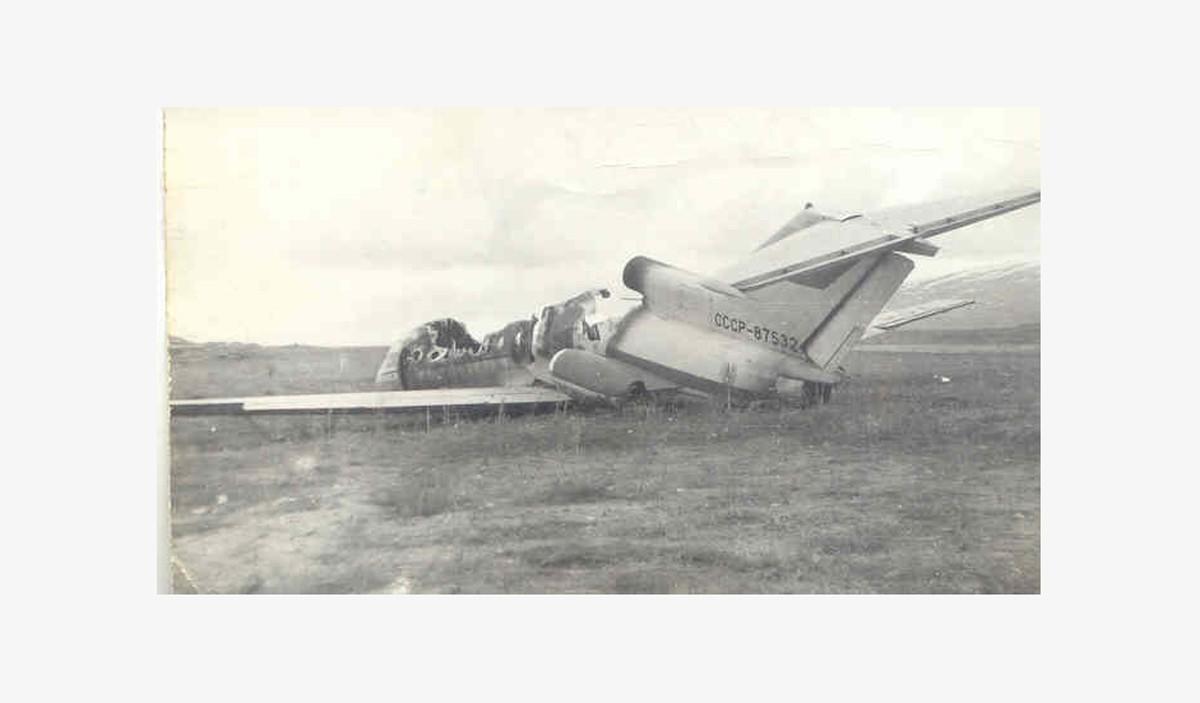 The USSR-87532 after making an emergency landing at Sisian Airport

In addition to the three-man crew, there were 28 passengers on the plane (this, according to Captain H. Davtyan. Zori Balayan says there were 33. Other sources indicate 30. Moreover, according to Armenian data, there were freedom fighters in the cabin, including wounded. Foreign sources mention refugees). After the evacuation, the plane completely burned. There were no victims, but both pilots were injured because of the hard landing.

Vagif Gurbanov, the pilot of the Azerbaijani Su-25 that attacked the Armenian plane, seized the combat plane with his fellow servicemen on April 8, 1992 from the CIS air base in Sitalchay, Azerbaijan. He also used the Su-25 to target Armenian settlements. On June 13, 1992, over the skies of Askeran, Armenian anti-aircraft guns destroyed the plane and Gurbanov, the pilot.

Azerbaijani forces not only targeted Armenian planes in the air, but also planes parked at Stepanakert airport. In the above-mentioned case, on May 9, 1992, the Armenian Yak-40 had to get back in the air immediately after landing in Stepanakert to avoid being bombed by Azerbaijani aircraft. However, shortly after the start of the flight to Yerevan, Gurbanov's Su-25 attacked the civilian aircraft in the sky.

One of the most tragic accidents of the Yak-40

Another incident related to Stepanakert airport is one of the most tragic in the history of Yak-40. According to aviation-safety.net, a website that deals with plane crash statistics, the plane struck a cloud-covered hill in the Lachin region, during its approach to Stepanakert, killing 46. This is the third largest disaster in the history of the Yak-40. 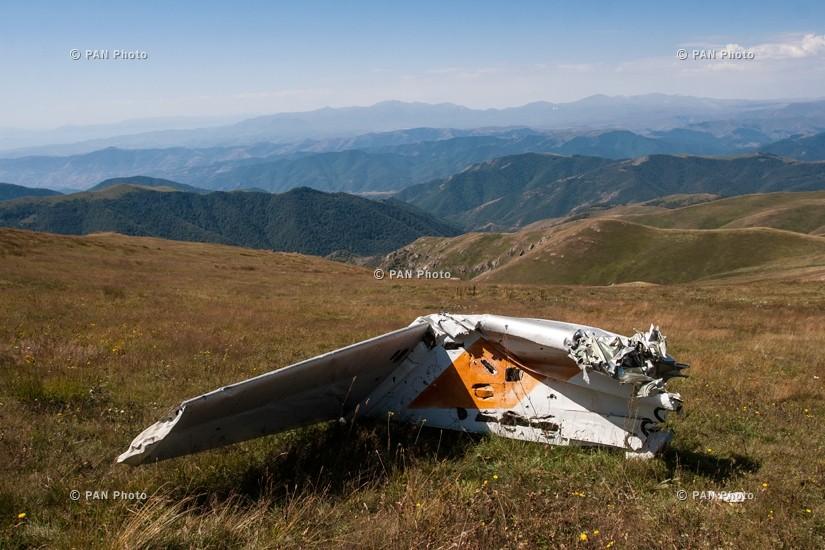 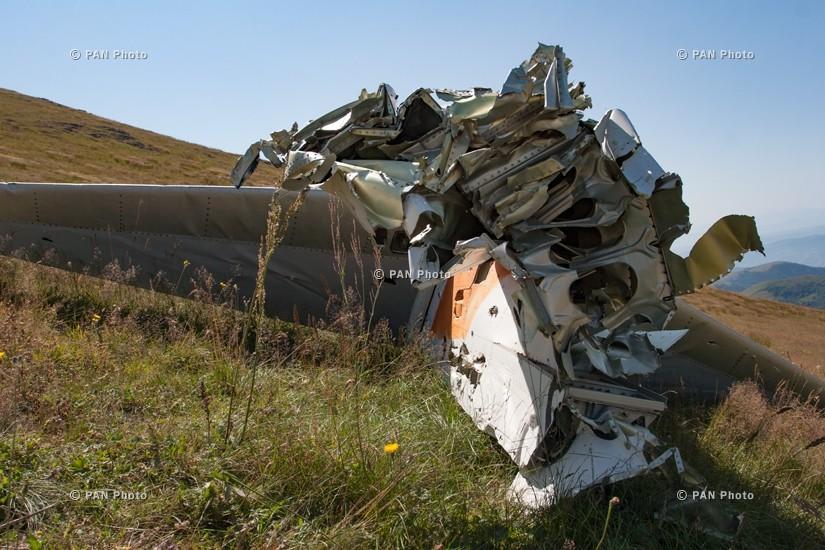 According to the results of the official investigation of the plane crash (the USSR still existed at that time), the plane did not crash because of foreign intervention, but the Armenian-Azerbaijani conflict played a role in this tragedy.

On August 1, 1990, when the Artsakh Movement had started and the conflict was already underway, the Yak-40 (Soviet registration: USSR-87453) of the 2nd Yerevan Detachment based in Erebuni airport was making another scheduled flight from Yerevan to Stepanakert. The captain of the plane was Ararat Dallakyan, the first officer - Alexander Hovhannisyan, the flight engineer - Zhora Davtyan. 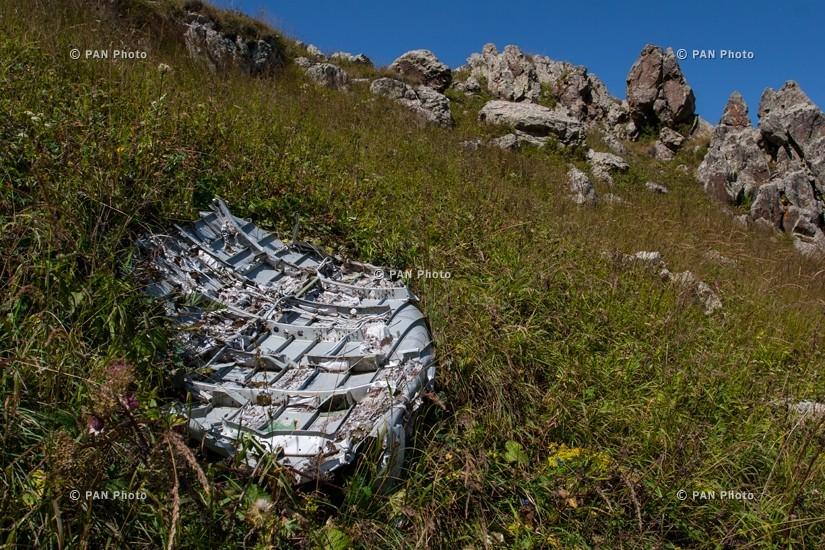 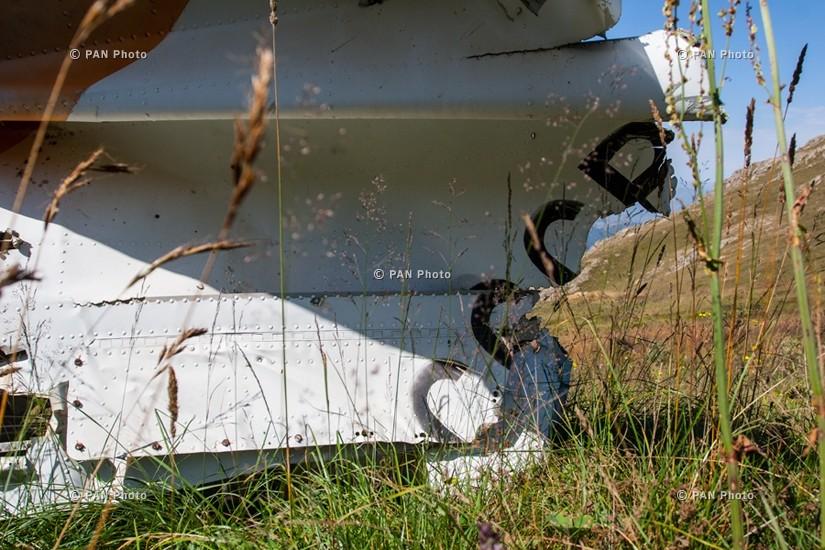 The investigation revealed that 13 of the 43 passengers were not registered, that is, they appeared on the plane in violation of the rules. The plane was overloaded. Although the Yerevan-Stepanakert flights were carried out at an altitude of 5,100-6,600 m, and the minimum limit was 4,516 meters, the USSR-87453, with the permission of the Yerevan air controller, flew at 4,500 meters. In addition, after the start of the flight, the crew immediately adjusted the radio direction finder (RDF) in the direction of the Stepanakert radio beacon and flew in a direction deviating from the planned route. As a result, the plane missed the two beacons on the road (did not pass over them), which would give the correct orientation to the specific location of the aircraft. In the absence of the planned route and the concurrent windy conditions, the Yak-40 gradually surpassed its normal course, but the crew did not notice it.

The conclusion as to why the pilots tried to fly directly to Stepanakert is as follows. As the landing at Stepanakert airport was scheduled to take place from the northeast after turning on the Aghdam radio beacon, during the Armenian-Azerbaijani conflict, Armenian crews avoided entering the Azeri-controlled zone. They attempted to land from the southwest (Stepanakert), without maneuvering over Aghdam. 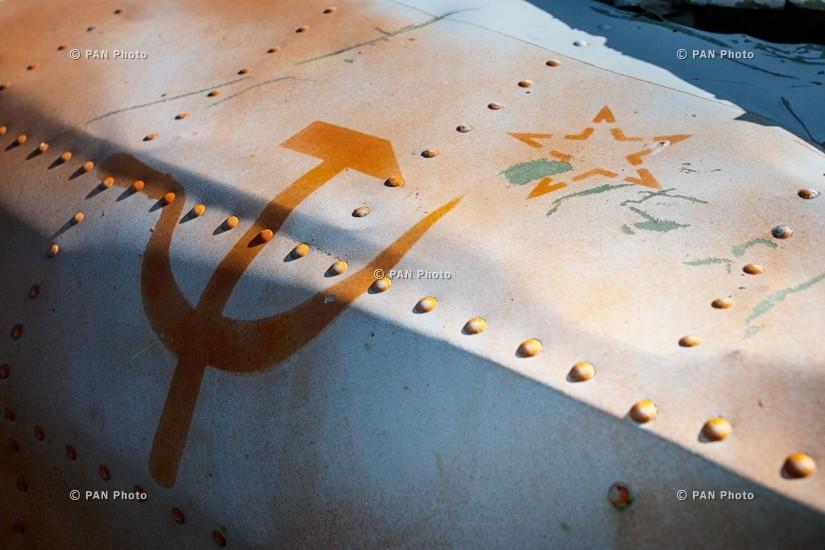 The plane’s captain reported crossing Lisagor (in fact, the plane was far from there) and asked for permission to descend to 2,400 m. In response, the “blind” controller allowed him to descend to 3,000 m. A few moments later, while descending in cloudy conditions, the Yak-40 crashed into the Karabakh (Artsakh) mountain range separating the Lachin region from the NKAO territory at an altitude of 2,520 m. The height of the mountain range in that section is 2,823 m. The disaster took place 22 km west of Stepanakert in the Lachin region. 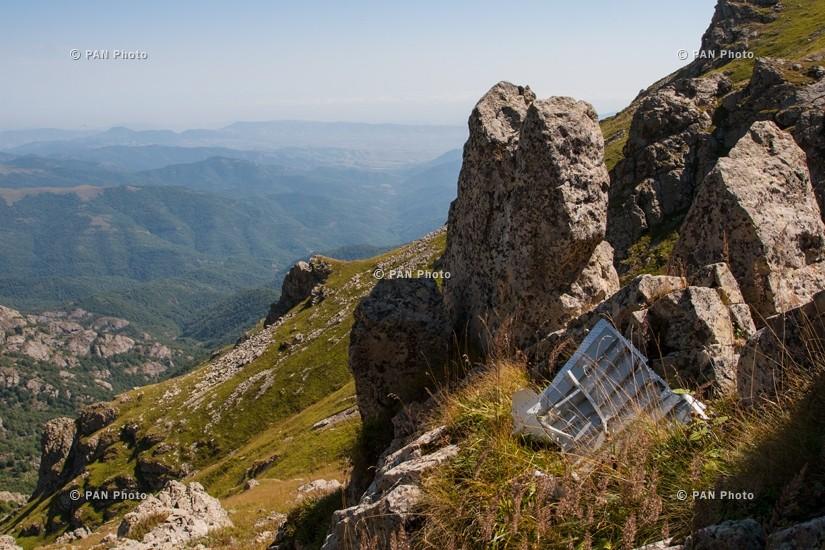 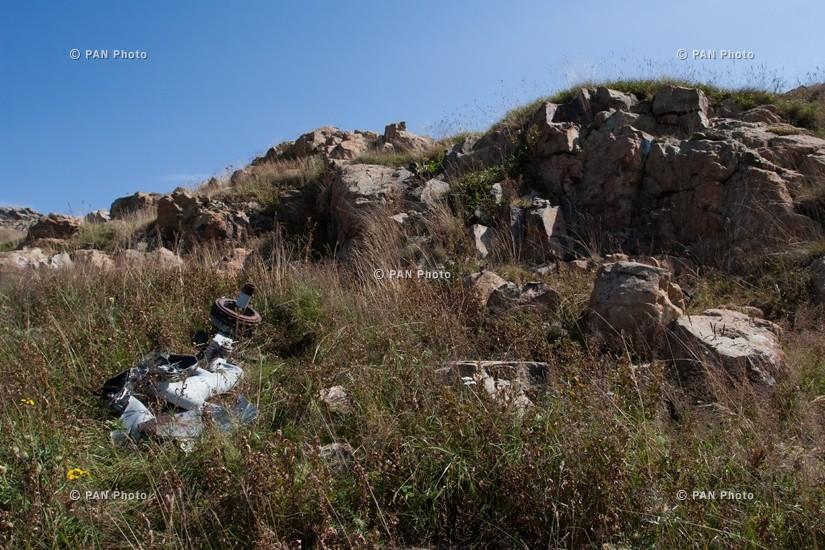 According to unofficial versions, the crash was not caused by the mistakes of the crew and the controllers, but by the overloading of the plane with passengers or by external intervention, i.e., that it was fired upon.