Election campaign slogans are not merely the political or electioneering attributes.

They not only reflect the ideals and goals of the political forces at play, but characterize a given political party’s conceptualization of reality.

The three parties comprising the ruling coalition that are contesting the parliamentary elections have transformed the leitmotif of their slogans into a factor of faith.

It is difficult to say whether this has been a result of mutual agreement or not. But this sharpening of the faith issue signifies that they, perhaps subconsciously, regard the basic challenges they face as a crisis of faith and trust. This has led to an extreme alienation between the authorities and the public.

This also is a confession of the terrible involuntary abyss that has surfaced between what the authorities say and do. This has resulted in public mistrust of any initiative trumpeted by the government. 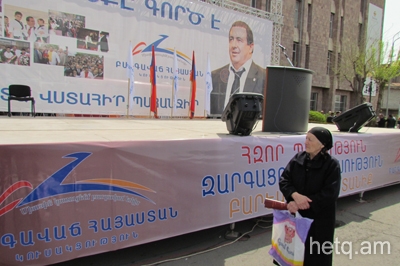 The leader of the Prosperous Armenia Party (PAP), Gagik Tsarukyan constantly stresses that the party’s words are to be found in its actions.

But, if this is the case, the idea of the slogan shouldn’t have been constructed on the expectation of faith and confidence, but rather, on the guarantee that a comparison of word and deed would be continued.

The PAP, without any serious political base and comprising a part of the coalition surrounding the Republican Party of Armenia (RPA), which enjoys an absolute majority, the PAP has not achieved the main points of its platform. Thus, the PAP has become an adjunct force that reluctantly ratifies the policies of the government and the RAP.

In reality, a synthesis of words and actions has not had any practical value for the party because, at the most crucial of moments, the PAP has failed to present anything resembling a unique identity. 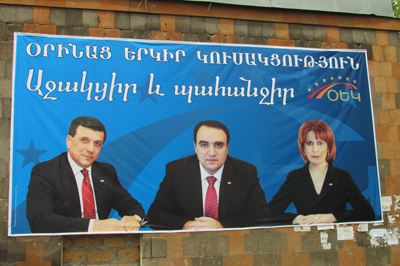 The RoL interprets the PAP’s call to jointly build a prosperous country from the perspective of building a country where the law is supreme and in which is a value of itself.

In the case of the RoL, the expectations of faith and trust, is much more understandable when we take into account the non-political capital that it has accumulated since 2008, merely in the role of serving the political ambitions of the RPA and Serzh Sargsyan. No wonder then that the RoL has wound up totally bankrupt today. 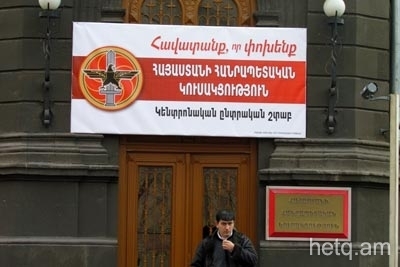 It was the RPA that first put forth the notion of faith. President Serzh Sargsyan presented its ideological underpinnings at the last party congress.

When compared to his campaign slogan “Forward Armenia”, touted by Sargsyan as a candidate running in the 2008 presidential elections, the current slogan comes across as a clear retreat.

The former slogan was based on self-confidence and anchored on ideals guaranteeing of forging a developing country. The current one is a plea to obtain the potential needed to extricate the country from its current state and the permission to us it.

The uniqueness of the current slogan is that it presents an expectation of trust and a picture of the domestic strengths and possibilities not of the party, but of the public.

In this context, the RPA’s slogan is more correct technically, even though it has been directly lifted from a slogan used in the USA presidential election campaign.

Thus, the RPA is searching for a means to free itself of any responsibility for the current situation and place the onus of the blame on the public itself; due to its lack of self-confidence and inner faith. Subconsciously, there is the inclination her to equate the RPA with the public and to make it a part of the general society.

The problem face by the RPA, however, lies in the contradiction between the mistrust surrounding the party and its slogan, as well as in the lack of faith regarding the party’s sincerity in realizing it.

It is the public that is demanding that the RPA change, for without a change in the essence and content of the authorities, and its objective expression, the party’s demand that the society be transformed is meaningless and even an escape from accountability.

Heritage Party/Free Democrats – “We are coming” 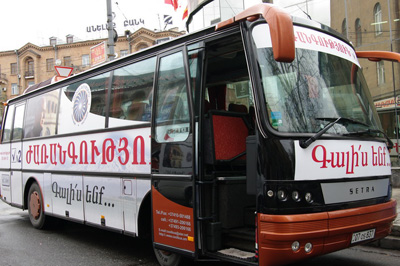 The slogan of these two parties is built on a vision of a new Armenia, it formulation encapsulating a pathetic romanticism.

It opens the door for a number of various formulas – for instance, “Why are they coming?”

However, when the answer to this question us summarized in the general catch-all phrase “to move mountains”, it is clear that the party has built its overall campaign on the genre of poetry.

Sure, it contains certain revolutionary elements, but it fails to present a more tangible picture of Armenia. In the meanwhile, the Armenian voter has become very practical oriented and is searching for a much more objective picture of the country in the proposals of this or that party.

Armenian Revolutionary Federation – "I am we, together we will win"

The idea of unity is also stressed in the ARF slogan. Here, there is the inclination to equate the party and society, something akin to the popular adage “We are not from the same house, we have the same fate”.

However, declaring such a call to united victory seems quite unrealistic and pretentious for a party with no real chance of winning.

This is particularly the case since it reminds one of Levon Ter-Petrosyan’s campaign slogan “We will win” used during the 2008 presidential campaign. It too was never realized.

From a tactical viewpoint, it would have been more correct for such a marginal political party to craft a slogan banking on its own uniqueness, i.e. stressing its “know-how” factor.