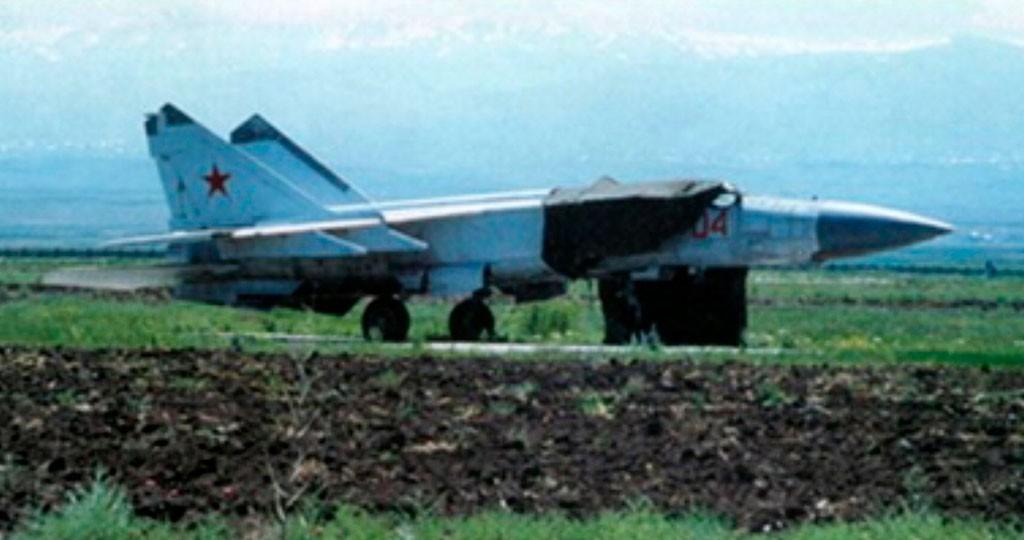 Artsakh 1993: The Unclassified Story of How Armenian Special Forces “Captured” an Azerbaijani MiG-25

Throughout the Artsakh conflict, beginning in the 1990s, there have been numerous instances of one side capturing military equipment from the other.

There is an unprecedented case, however, when the Armenian special services captured an Azerbaijani military aircraft without firing a shot.

Few know about it in Armenia.

The Azerbaijan plane remains parked at an air base in Armenia. It hasn’t been exhibited, for all to see, as captured Azerbaijani war booty.

Meanwhile, Azerbaijan, has opened such a “theme park” in Baku, showcasing captured and damaged Armenian military equipment and the crude effigies of Armenian soldiers. The Azerbaijani government uses such exhibits to fuel hatred towards Armenians and to boast of its military prowess.

Armenia and Artsakh, which won the first war, certainly had the opportunity to open several such parks. We, however, never crossed the red line into xenophobia and fascism.

During the Soviet era, the Soviet Air Force was unequally distributed in Armenia, Georgia and Azerbaijan.

In 1990, there were two helicopter air squadrons in Armenia, and much larger units like regiments (including fighters, bombers, other aircraft) in Georgia and Azerbaijan.

When the Soviet Union collapsed, Azerbaijan “acquired” a significant amount of Soviet air equipment, including MiG-25 fighters, through various deals or simply by theft.

However, Azerbaijan did not have qualified military pilots and contracted Soviet servicemen, particularly Russians and Ukrainians, who flew combat missions in the conflict zone.

On January 14, 1993, during the first Artsakh War, an Azerbaijani MiG-25PD interceptor fighter (designed for destroying enemy bombers and cruise missiles), still bearing the Soviet red star and number 04, took to the skies from the former Dollyar Soviet Air Base forty kilometers from the town of Ganja. According to an Azeri source the last name of the pilot was Reva, who had served in the Azerbaijani army on a contractual basis.

Flying in front of Reva was a MiG-25 piloted by Alexander Plesha, another mercenary.

The planes had flown from Dollyar to the south, in the direction of Nagorno Karabakh, to perform a combat mission.

When they crossed the Mrav mountain range and headed for Martakert (In June 1992, the Azerbaijanis, with the help of Soviet troops, had captured the Shahumyan region and most of the Martakert region, including the town of Martakert) Plesha suddenly noticed that Reva's plane wasn’t following him.

Back in Azerbaijan, they first thought that Reva, who was making his first flight as part of that country's air force, had crashed into the Mrav mountains. They later found out that Reva had hijacked the plane to Armenia.

Dmitry Pisarenko, who heads the Sputnik Armenia news agency and was the correspondent of the Russian Vesti program in Armenia at that time remembers what happened after the case in Armenia.

Pisarenko recalls that on that winter day in 1993, he and other reporters covering the hostilities were invited to a closed-door meeting with then Armenian President Levon Ter-Petrosyan's National Security Adviser Ashot Manucharyan. The journalists were warned not to bring cameras to the meeting. Manucharyan also instructed the journalists not to take notes or record anything.

"You should know about it, but report something else. This is necessary in the interests of the state,” Pisarenko quotes Manucharyan. The journalist says that Manucharyan wanted the reporters to display a united front.

"Yesterday, the operation of our special services was successfully completed," Pisarenko recalls Manucharyan telling the assembled reporters. “A MiG-25 plane landed at Erebuni Airport under the pretext of a combat flight from Azerbaijan's Dollyar Air Base. This type of aircraft can carry out reconnaissance flights and drop bombs. Moreover, they can carry nuclear weapons. (Manucharyan was not mistaken, as various modifications of the MiG-25 are designed for different purposes, including carrying nuclear weapons - Hetq). This operation has been prepared for a long time. In Russia we found a former military pilot who, of course, agreed to cooperate in return for payment. His task was the following. He entered the contract service of the Azerbaijani Air Force and hijacked the fighter plane to Armenia during his very first flight, which was successfully done. And now, your task․ It should be reported that a MiG-25 plane of the Azerbaijani Air Force was shot down in the Krasnoselsk region (now Tchambarak - Hetq) during an attempt to invade Armenian airspace yesterday, and according to many eyewitnesses, it crashed into Lake Sevan. The pilot failed to eject."

A few days later, Pisarenko says one of the opposition newspapers in Armenia wrote about heroic incident without referring to the author or the source. Nevertheless, this real story gained little traction and was soon forgotten.

As mentioned above, the Azerbaijanis soon found out that the Armenian special services had recruited Reva. According to an Azerbaijani source, Reva entered the contract service in the Azerbaijani air force through his friend already serving there.

As for the MiG-25, it’s still parked at one of the air bases in Armenia. Whether it has flown or not since arriving in Armenia is not known.