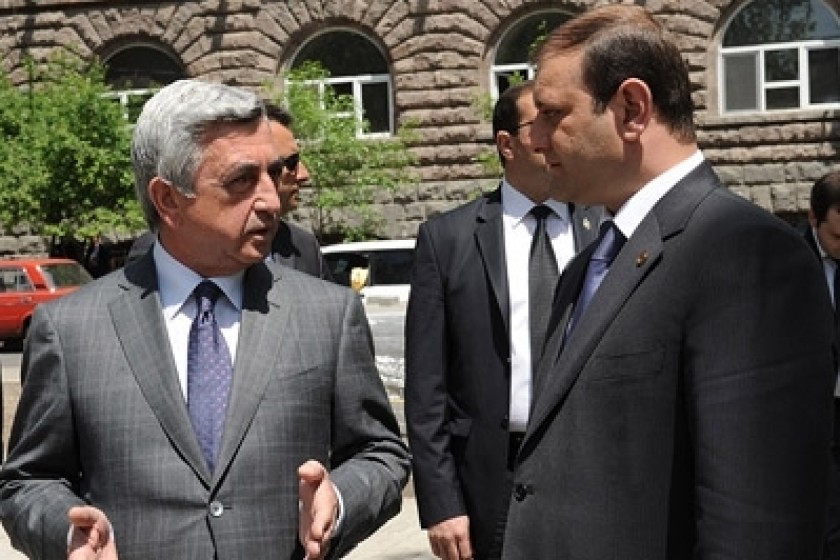 Mashtots Park: Circumventing the Law for a Presidential Photo-Op

So, the president of Armenia visits Mashtots Park, walks around, and then tells Yerevan Mayor Margaryan, “You know, this isn’t all that pretty.”

In essence, it took Armenia’s president to make a final decision regarding the kiosks in the park. There was no one else in government able to go up against the interests of two oligarchs.

What does this say about the state of governance in Armenia?

If this state of affairs continues, the president will be called upon to OK who gets to be employed as drivers and chauffeurs for state agencies and their top honchos.

Maybe these same state officials can install some oxygen tanks on the choked arteries of Yerevan where they can pull over and fill their lungs with some clean air. They can hand over the keys to these oxygen faucets to the president himself. Let the commander-in-chief turn the spigots off and on.

Turns out that Mayor Margaryan didn’t have what it takes to take an independent decision.

Why didn’t the mayor take my advice? It would have been so simple.

“Taron, one of your great achievements was to remove the stores on Abovyan Street. You have also been correct when it came to the private property issues involved. Yes, you cannot build legality based on illegality. And it is not possible to create comfort with illegal actions,” President Sargsyan told Mayor Margaryan during his park visit.

“Dear Taron jan, you were right to say the kiosks would be taken down in 2-3 years. But you’d agree with me that they don’t make a pretty sight. The municipality has worked effectively, no doubt, but the area isn’t pleasing to the eye. It would be best to find another solution and dismantle all this," the president added.

Of course, the president’s concerns for the park and its “looking good” were all a sham, a convenient photo-op right before the elections.

During the past two months, the authorities had dismantled a number of structures to defend those commercial stores – the police, judicial system, the Yerevan Municipality – just with one purpose in mind, i.e. so that the president could make his grand appearance in the park days before the election and tell Taron “But you know, it ain’t pretty. It would be good to find another solution and tear all this down.”

So now Mayor Margaryan has to come up with another solution to appease the oligarchs, to compensate the owners of the stalls.

If he decides to financially compensate them, Mayor Margaryan should get the money from his predecessor, the mayor of Yerevan who allowed those stores on Abovyan Street in the first place.

I have a question for the president. Wasn’t he aware that those stores cluttering up Abovyan Street were illegal?

Prior to the elections, the president should do the right thing and nullify those illegal contracts that the store owners had signed with the Yerevan Municipality.

The president should take a close look at those contracts; that is if they still exist.

He’ll see that those store owners still have outstanding debts to the government.