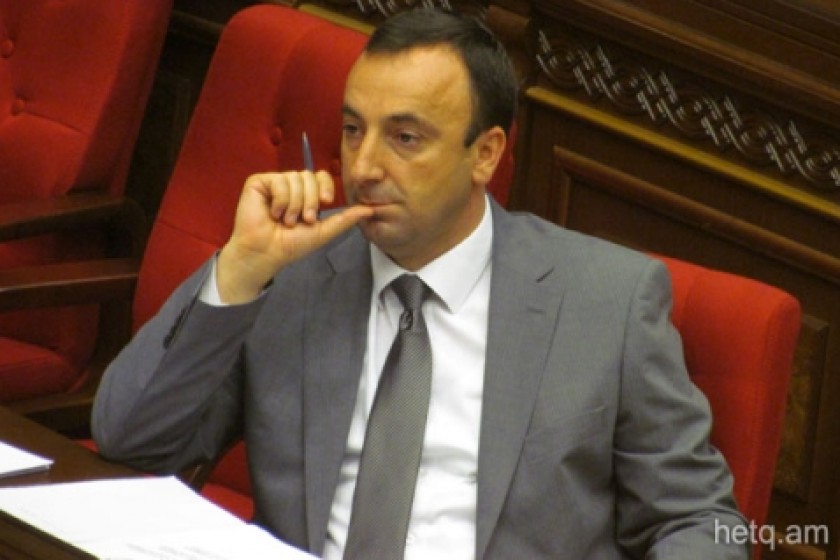 A few days before New Years, Gagik called me from prison. He said that he wanted to break his finger and take the case to the European Court of Human Rights (ECHR).

I told him he was crazy, and in any event, a broken finger wouldn’t be enough to get the ECHR to hear his case. I guess I convinced him of the folly he was contemplating. Gagik said he forget the idea.

Gagik has broken his finger since our conversation, but he always entertains such thoughts. He is constantly mulling various ways to get his case heard. I can just picture the ECHR judges opening a folder with Gage’s finger inside. Oh, the expressions on their faces...

Gagik is truly a difficult prisoner. Difficult, because they fabricated charges against him and Gagik can’t reconcile his mind with that. At first, they charged Gagik Karapetyan with large-scale theft. Later, they changed the charge to organized robbery.

Just picture this. The court stated that sufficient evidence had been provided to sustain the organized robbery charge, but only Gagik was found guilty and punished.

Even more amazing is that Gagik named those individuals who had pressured and prodded him to committing the theft in the first place. He told the police all about it.

When the last three justice ministers spoke about reforms to the system, I never took them seriously. Those “reforms” have been in the works for the past ten years. What have been the results? Have the courts and serving judges become more independent? No. In fact, they have become more controllable and more corrupt.

Their financial and other means have grown exponentially. They are busy buying expensive private homes and fancy cars. But no one seems interested in finding out where all the money is coming from.

In point of fact, actual reforms must start by following the money trail.

I am convinced that there is no need of reforms today as well. All one has to do is select one or two court verdicts and dig a little bit to reveal the entire chain of events.

Recently, Hetq covered an attempt to prevent a case of money laundering. Two judges had declared contradictory verdicts in the matter. The case has remained the same; nothing new has been added.

If the Special Investigative Service could get Judge Koubanyan to provide the names of those who telephoned, instructing him to declare the verdict that he did, then the judge, minister, and the bank representative would be behind bars.

Believe me, every other judge would get the message loud and clear. None would dare issue a verdict solely based on a telephone call ever again. In my estimation, this would constitute real reform.

When talking about reforms, Justice Minister Tovmasyan means changing the laws. But there is no scarcity of laws on the books in Armenia. Just count the money made by the Venice Commission when talking about changes to Armenia’s Electoral Code or when it presents its findings. Not surprisingly, the Commission has always given good marks to Armenia. But this hasn’t resulted in normal elections in Armenia.

If you want us to believe that you are sincere and serious about implementing reforms, then study these cases and punish the judges involved.

The resulting shockwaves will result in true reform. No judge on the bench will ever entertain the thought of issuing a verdict for cash, favouritism, or based on a telephone call from on high.

The time has come for you to stop playing that reform lullaby record of yours and take concrete steps.