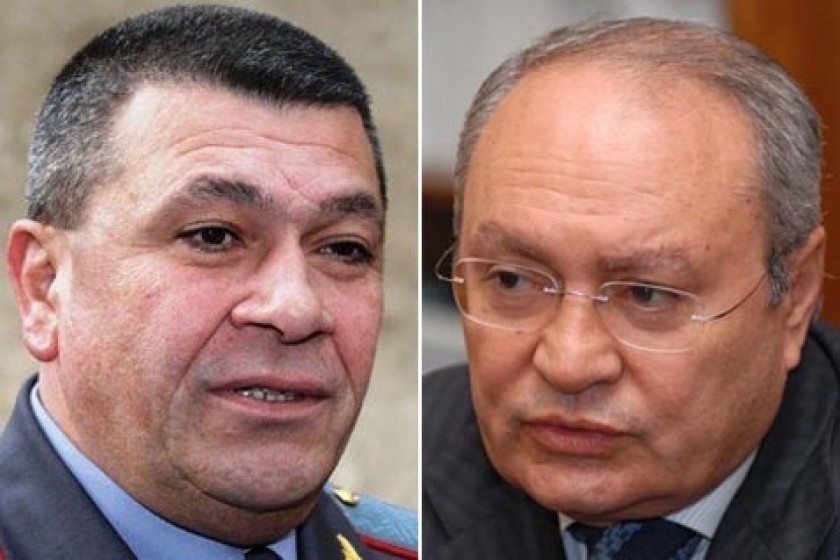 Nairit Loan Scam: Is the Government Implicated in Millions of Dollars Going “Missing”

Over the years millions of dollars have been lent to the Nairit Rubber Plant. No one knows the exact amount. The Armenian government remains tight-lipped on the subject. State officials refuse to talk to Hetq. It’s a sensitive topic and a potentially embarrassing one. Yet another traditional example of money laundering at the highest level.

In addition to the $70 million loan taken by Rhinoville Property Limited in 2006, according to Nairit Plant CJSC financial statements, the factory took out another loan from Interstate Bank in 2009 for 35.5 billion AMD ($86 million). There was another 5.5 billion AMD ($13.5 million) loan in 2010. In other words, $170 million in loans were given to Rhinoville Ltd and Nairit before 2011.

$170,000 million later, we still have a factory that lies idle. How was all that money managed? Is there any government official in Armenia that can provide an answer? The Police and Prosecutor General’s Office remain silent. There are two likely explanations. Either the government was involved in these transactions or privy to what was taking place – which would explain their stonewalling tactics. Or else they just can’t wrap their heads around what has happened under their very nose and aren’t capable of getting to the bottom of it all. Perhaps the current crop of presidential candidates should add another point to their platforms – Exposure of the Nairit fiasco.

CIS Interstate Bank took Rhinoville Property Limited, the 90% shareholder of Nairit Plant, to court. The bank is demanding $25 million from the company – around $17 million is in interest and $8 million in penalties and fines. Alexander Mikhkov, who is coordinating the Nairit matter at CIS Interstate Bank, confirmed to Hetq that it had gone to the courts. Moscow’s arbitration court will hear the case on March 18.

The fact that Interstate Bank has taken Rhinoville to court is that same as suing Nairit Plant, given that Rhinoville has become a shareholder in Nairit, even though authorities in Armenia and the factory’s management had successfully concealed this fact for a long time. Thus, if the court sustains the suit, those sums will have to be paid by Nairit Plant. Given that 10% of Nairit is owned by the RA government, Armenian taxpayer money will have to be paid as well.

The Interstate Bank (IB) was founded in 1993 and was comprised by the central (national) banks of the following CIS countries – Armenia, Belarus, Kazakhstan, Kyrgyzstan, Moldova, Russia, Tajikistan, Turkmenistan, Uzbekistan and Ukraine. Initial capital investment in the founding charter break down thusly – Russia (more than 50%), Ukraine (20%) and less than 8% each for the others.

According to IB’s website: The goal of the Interstate Bank’s activity consists in facilitation to economic integration and development of the national economies of CIS countries by means of creation of the mechanism of settlements for effecting trans-border payments in national currencies, crediting foreign trade operations of CIS countries in national currencies, and participation in implementation of investment projects of inter-state significance.

Presently, RA Central Bank President Artur Javadyan sits on the Board of IB.

Let’s remember that Rhinoville had taken a $70 million loan from IB in order to buy 90% of the shares in Nairit Plant and to make investments in the factory. As collateral, Rhinoville put up shares of Nairit with IB. The loan was issued in August 2006 at an annual interest rate of 12.5% for five years and three months. In one of the financial documents of the IB board it states that of the $70 million, Rhinoville paid $39 million to purchase 90% of the shares in Nairit Plant.  With $12.8 million it increased its working capital and paid $18.2 million for reconstruction and refurbishing services. The reader should pay attention not to the working capital but to the latter. What was purchased with the $18.2 million?

There is no reference anywhere to the remaining $1 million. Whereas according to   RA government’s Decision 1121-A of August 18, 2006, 90% of the plant’s shares were sold for $40 million under the purview of the transaction agreement signed in 2006.

We wrote to HayGazArd (a former large shareholder in Nairit, from which Rhinoville purchased the plant), in order to ascertain if it had received the last $1 million or not. HayGazArd Director Gagik Hakobyan wrote back: “The purchaser, according to the contract, paid $39 million in the year of the transaction, and the remaining amount after a review of the plants assets and liabilities.”  So far from Mr. Hakobyan’s response it still isn’t clear if the money was actually paid or not after the review. Perhaps there was a deficit problem and that’s why the $1 million wasn’t paid. However, according to Gagik Hakobyan, there wasn’t a surplus or deficit problem. “With a signed agreement between the parties of June 7, 2007, the buyer and seller regarded the handover and receipt of the work as envisaged in the contract, to be finalized.”

We sent a second letter to Hakobyan, noting that in the Rhinoville document in our possession there was reference stating that Rhinoville had transferred the $1 million to HayGazArd.

Gagik Hakobyan, perhaps not reading his previously sent statement with due diligence, gave another answer this time: “...After a review of the assets and liabilities, the remaining mutual obligations were carried out in 2010.” However, there is no mention of the transfer of the $1 million to HayGazArd in the 2010 accounting statements of Rhinoville Property Limited.

The secret of the $1 million is to be found elsewhere. In 2006, Rhinoville registered a sister company in Russia called Rhinoville LLC. Its director was A. Kulikov, wife of former Interstate Bank deputy president Sergei Kulikov. The $1 million was transferred to the new company as founding capital. This company was supposed to sell the caoutchouc (rubber)  produced by Nairit Plant.

On August 18, 2010, Rhinoville LLC merged with Nairit LCC (ZAO Nairit), a company registered in Russia in 2007. Thus all the rights and obligations of Rhinoville LLC passed to Nairit LLC. Rhinoville Property Ltd owns 24% of the shares in Nairit LLC; the other 75% are owned by Nairit Plant CJSC. In January 2012, the management of Nairit Plant decided to dissolve Nairit LLC.

It turns out that Nairit LLC has yet another sister company – Nairit Trading Company Limited, registered in Belize. In 2008/2009, Nairit LLC invested around $45,000 in it.

In 2009, Nairit Plant registered another sister company in Armenia – Nairit Trading and Service Group. The amount invested in it wasn’t large. In March 2012, it too was dissolved.

Rhinoville Property Limited also founded Rhinoville Chemical Industry in Armenia. This too was supposed to provide advisory services. $2,500 was transferred to the latter as founding capital.

As to how the $1 million, from the $70 million loan, transferred to Rhinoville LLC and the other working capital transferred to the other sister companies was managed, is something that only former plant director Vahan Melkonyan knows. It was under his watch that these companies operated.

Regarding HayGazArd, it is a state enterprise wholly owned by the RA Ministry of Energy and Natural Resources. Surprisingly, Minister Armen Movsisyan doesn’t seem at all concerned that Rhinoville Property Limited hasn’t paid the remaining $1 million. The Armenian government as well, in the person of Prime Minister Tigran Sarsgyan, hasn’t followed up on the implementation of the government’s decision.

There is an interesting fact contained in the document of the Interstate Bank’s Economic Council. It turns out that the Russian company “ПСМ” LLC was also involved in the selling of Nairit Plant products. Interstate Bank provided it a $10 million loan, ostensibly to buy Nairit rubber.

In 2005, another company appeared involved in the sale of plant product – Intercaoutchouc. This is a much more interesting topic that we will soon cover separately.

Perhaps law enforcement should look into why Nairit Plant saw the need for so many sister companies involved in the sale of its product. The history of Nairit shows that it never had any trouble selling its products directly to end consumers.

Add up the numbers. That’s around $170,000 million in loans provided by Interstate Bank to Rhinoville Property Limited and Nairit Plant   as of 2011. We contacted the factory to find out if the debt obligations had gone up or down since then. Nairit Plant didn’t respond to our written inquiry, but referred us to the company’s official website. However, the company’s 2012 financial statements still haven’t been posted and thus we can’t get the complete debt picture. The extent to which Nairit Plant has paid off its debt, or taken on new debt, isn’t clear.

Neither has the Ministry of Finance clarified anything about the plant’s debts. It merely responded that the debt was provided directly to the factory and that the government provided no guarantees. Readers will remember that the RA government, in the person of the Ministry of Energy and Natural Resources, owns 10% of Nairit Plant shares. It has a stake in the plant and must surely be involved somehow in the lending/borrowing history between Interstate Bank and Nairit Plant.

Here’s another valuable piece of information in the financial puzzle. To attract these credit resources, Nairit Plant engaged the services of the offshore company Tarbet Management Limited. The mediation services rendered by Tarbet, allowing the plant to get the loans, amounted to a bill of 261 million AMD ($650,000). There are tens of offshore companies involved in the history surrounding Nairit Plant, but the addresses of many are the same. For example, the addresses of Tarbet Management Limited and Latherton Properties, the company that founded and was a shareholder in Rhinoville Properties Limited. In other words, this money was also pocketed by those running these companies behind the scene.

Will Minister of Energy and Natural Resources Armen Movsisyan come out and explain why these companies gave so much money and who they actually paid?

After receiving no official response from Armenian state agencies regarding the debt obligations of Nairit, we contacted Interstate Bank President Igor Suvorov. The bank refused to answer any of our questions.

“There are conditions in our agreement that the information contained therein is secret and not revealed to third parties,” responded Alexander Mikhkov, who handles the bank’s dealings regarding Nairit. He refused to broach any issue dealing with Nairit.

“I don’t want to make any comment in order not to annoy anyone.”