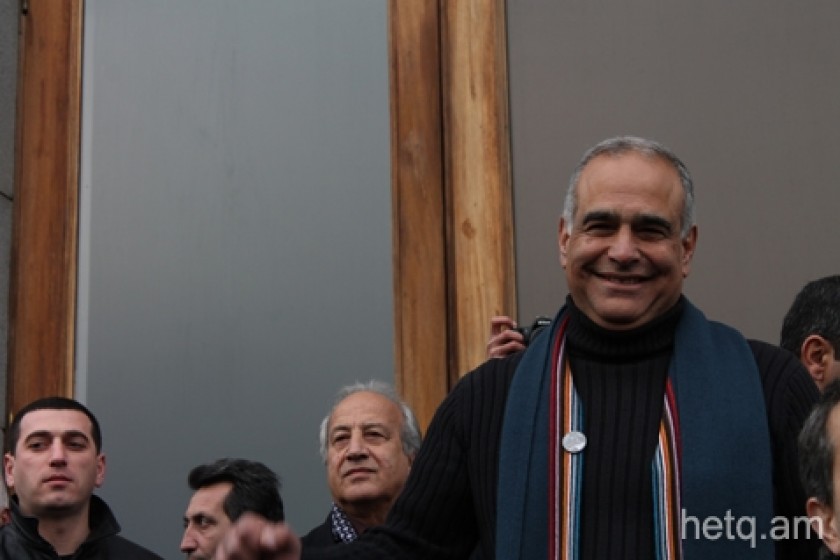 Raffi Hovannisian: "I demanded that Sargsyan recognize the people's victory. He refused."

Addressing the throngs of supporters today in Yerevan’s Freedom Square, Raffi Hovannisian said that a yesterday’s meeting at the Presidential Place Serzh Sargsyan refused to recognize the “victory of the people”.

Responding to some in the crowd who had questioned why Hovannisian took the trouble to walk on foot to see Sargsyan, Hovannisian said, “I went because I have no hang-ups in my homeland. I have no fears.”

Hovannisian said that his parting word to Sargsyan was a demand to punish all those who had engaged in election fixing.

Hovannisian, who has refused to accept the official election results naming Sargsyan the winner, assured the crowd that he would continue to wage a “peaceful and constitutional struggle”.

“We have no time to waste. This popular movement will not die. We are headed towards victory,” he exclaimed.

Hovannisian announced that starting tomorrow, he and his supporters would tour all the towns and villages of Armenia one by one to take the victory and greetings to our compatriots.

“Tomorrow Ashtarak. In the afternoon it’s Vanadzor and Gyumri by 5pm. On Sunday at 3pm we will gather again at Freedom Square,” said Hovannisian.

The Angry Armenian 2019-01-25 08:29:14
Raffi received 36-37% thanks to extremely weak opposition groups, indeed parties that were afraid to participate in the election. Why was this the case? First, there was no real opposition candidate, not even LTP (who even could not consolidate its ANC). Second, there was no political, economic, or social program that constituted an alternative to the program of the incumbent. Thus, the lack of a strong oppositional leader and the absence of the opposition per se helped Raffi (whom many leaders of other parties had just ignored over the years) to acquire the support of a disenchanted and tired electorate. Being narcissistic, Raffi became convinced that his mission is to rule over the Armenian people. Why have so many so quickly forgotten that he was even unable to lead MFA, his own research center, Hayastan Himnadram, etc. His party won only 5 (!!) seats in Parliament. If he could not decide whether to be a member of Parliament, how then can he now represent the nation? Our so-called opposition sought to transform the elections into a farce --- and it has succeeded. But now Raffi is playing with fire: he is pushing the country into bloodshed. Shame on you ANC, shame on you Dashnaktutyun, shame on you Barghavatch. And shame on all of you who have made Raffi a national hero. This unfortunate consequence of the election has occurred simply because a viable opposition failed to appear.
haykUS 2019-01-25 08:29:13
It is like dream come true. If Raffi can bring everyone together we all will come back to our country. I now see light in the dark tunnel. The light is all this great folks that want to build rule of law and darkness is Serz with his bloodsucking oligarchs and government. We are all tired from Sashiks, Serziks, Nemets, Dods, Lfiks and the rest of the crap of society.
HovikUS 2019-01-25 08:29:13
Count me in.
Tlkatintsi 2019-01-25 08:29:13
haykUS - Come back now if you can...Armenia needs sincere and dedicated people today. Tell your friends that we are all together in this struggle to rid Armenia of the lies and filth that have polluted the environment and corrupted our people for too long. Believe me, Serzh lost the election and he will soon be stripped of his power. People are waking up to the fact that they can make a difference. Collectively, we can move mountains!! All the best!!
Not another dumb Armenian-American 2019-01-25 08:29:13
Serzh fought in the war. He knows how to deal with the Russians and Turks. Serzh is a Artsakh Armenian. He knows how to rule a country. Raffi is a weak leader. He will try to move the country towards the West because he can not communicate with the Russians. This will lead to Armenian concessions to Turks because Russian will turn their back on Armenians. This guy is like Mikael Sakashvilli. He will attempt to talk “big” and then give the Turks a reason to enter Armenia.
Jay 2019-01-25 08:29:13
@ haykUS, the light that you see in the dark tunnel is a choo-choo train coming your way, you better run and don't look back. Raffi,is playing with fire sooner or later he'll get burnt. Since when a candidate trailing an incumbent by 22% has been declared winner. Hovhannisian,is not a winner he is a wiener,he should concede defeat,respect the election result,and support the re-elected president.
Ed 2019-01-25 08:29:13
Not another dumb, your doubts are your worst enemy. Raffi is nothing like Saakashvili. Saakashvili is anti-Russian - Raffi is not. Sahakashvili is pro-Wester, without even knowing what the west is all about. Raffi was born, raised, and got education in the west. Raffi is pro-Armenians and he's uniting our people. What more can you ask for? Last and not least, don't forget it was Serzh who signed the protocols. Next time think twice before you slander people.
Vahagn 2019-01-25 08:29:13
Էս վըր օրվանիցընք սկսած մինս մինիս հետ անգլերեն կիրել ու խոսել:
Ed 2019-01-25 08:29:13
Vahagn jan, ays [email protected] nayev anglerenov e grvadz. Meknabanoghneri himnakan [email protected] [email protected] kardatsoghnern en. )) Ari husanq amen inch Hayastanum barehajogh kavartvi, vor nayev Hayastan-Spyurq [email protected] amrapndven. Da arit kta shat spyurqahayeri vor hajakh aytseln Hayastan u hayereni [email protected] lavatsnen.
Gayane 2019-01-25 08:29:13
Shat texin er [email protected] Iskapes HAYER ushqi ekeq, tuyl mi tveq erkrum ankayunutyun tiri. Hangist u xaxax apreq, drsi ujerin tuyl mi tveq xekavaren mer [email protected], ushqi ekeq.
Gevorg Der-Galestanian 2019-01-25 08:29:13
TO : (Not another dumb Armenian-American) ; With All These Knowledge And Informations Why Are You Hiding Introduce Yourself Let Us Use Your Direction And Guidance Towards Prosperous Armenia ;. Thank you ,