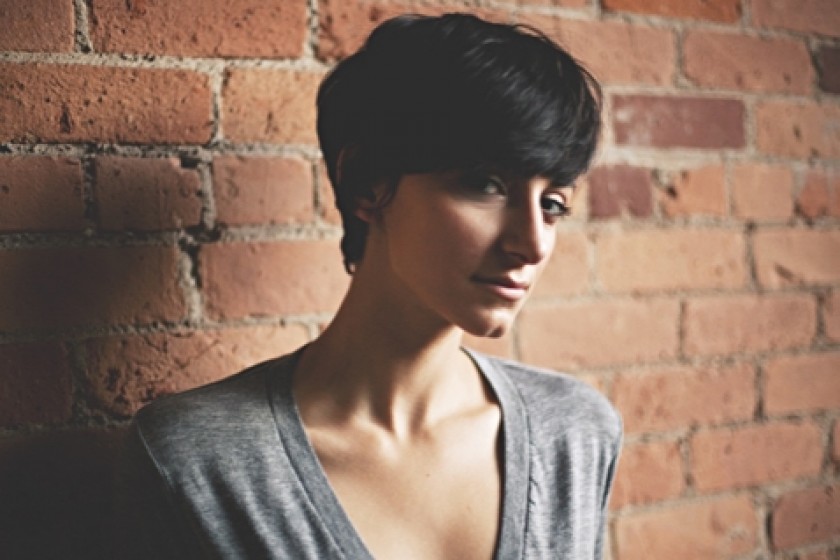 In a cafe, Oksana laughed and “confessed” that her Armenian wasn’t sufficient even to order something to eat.

She’s been in Armenia for two years, but she’s been too busy to learn Armenian. Rather than getting used to life in Armenia, she says she’s tried to understand it. As a result, she’s felt that she belongs here.

Oksana Mirzoyan was born in Baku. Her father hails from Baku and her mother from the village of Karahounj in Syunik. During the Sumgait pogroms the family immigrated to Armenia, then they granted asylum to the United States, settling in Detroit. That’s where she spent 23 years of her life.

“You know, I feel at home all over. I adapt very quickly. That’s probably because I move around so much. But I have often thought what the concept homeland means. I love living in Armenia, because here I have met people with whom I can discuss issues that interest me. That’s to say, for me the homeland isn’t mountains. What keeps me here are the people I feel connected to,” she says.

Oksana says that in the beginning, many of her compatriots would question her in a negative way as to why she came to Armenia.

Why did Oksana decide to come to Armenia?

Oksana made her way to Armenia on her own. She learnt about the organization Birthright Armenia in 2011. It facilitates young diaspora Armenians to visit and live in Armenia. Those who come do voluntary work. She decided to apply and uncover the place where her roots lie.

Before talking to Oksana, I had watched snippets of the American thriller film The Death of Michael Smith. In the film, Oksana plays the part of Miss Warren. In 2007, the film had succes at the Slamdance Film Festival.

During her first months in Armenia, Oksana did voluntary work at the Bars Media documentary centre.

He second voluntary posting was at COAF (The Children of Armenian Fund). She conducted photography lessons for kids in the village of Myasnikyan (Armavir). During her work there, she decided what screenplay her future film would have.

Little Edo goes to the store for the first time. He has to buy milk for his sister. His mother gives him the last 140 Drams in the house. It turns out that 140 drams isn’t enough. The price of milk has gone up. He stands by the milk display and while the clerk isn’t watching he grabs a carton and hides it under his shirt. He places the 140 Drams on the counter and runs home. He tells nothing to his mother about the theft. In the evening, he doesn’t come out to play in the yard.

Oksana wrote the screen play for the film “140 drams” and directed it. She says that once the screenplay was finished she went to the online website Kickstarter - a funding platform for creative projects. Via the site, Oksana raised about $7000 to begin the filming.

Filming was done in the Yerevan district of Shengavit. The actors and film crew are Armenians. Final editing took place in the U.S.

Oksana relates that the screenplay for the 15 minute film was conceived while working with the kids in Myasnikyan. She says the children real felt the environment in which they were living.

In the film, Edo suddenly grows up after the theft and decides to no longer play games with the other kids. Oksana says his mature demeanour is natural. She says that while she was teaching the children photography, she didn’t want to teach them the techniques but rather to see what a child’s eyes see in that world in which they live. She says they are able to “comprehend their social situation.”

Edo is just a kid, but he knows that something has happened. He feels bad and confused. “I don’t want to portray just how poor that family is, but rather I wanted to show an average Armenian who can fall at any moment but survives,” Oksana says.

140 Drams will not be show publicly until after the festival. What follows is a trailer.

On the FIFF website, Atom Egoyan writes: “I’m aware that I have included two of my own films, and that none of the others were made by an Armenian living in Armenia. That is why I want you to discover this short feature by a young filmmaker, shot in Yerevan, which I find very promising. By scheduling it before Calendar, I’m trying to show the hope kindled by the new generation of Armenian filmmakers.”

Oksana is now cooperating with the One Armenia Armenian Nonprofit Organization. She wants to make other films in Armenia, “140 Drams” is only the start.

“I don’t understand when they try to make “Hollywood-type” films here. There are people here that photograph truly original stuff, but I don’t like it when they try to copy the West,” says Oksana.

She says that the Armenian cinema has everything needed to make it stand out internationally – there are very talented professionals, the necessary equipment and all types of natural landscapes.

Directors in Armenia enjoy another advantage, Oksana believes. Making a film in Armenia is incomparably cheaper than, say, in the States.